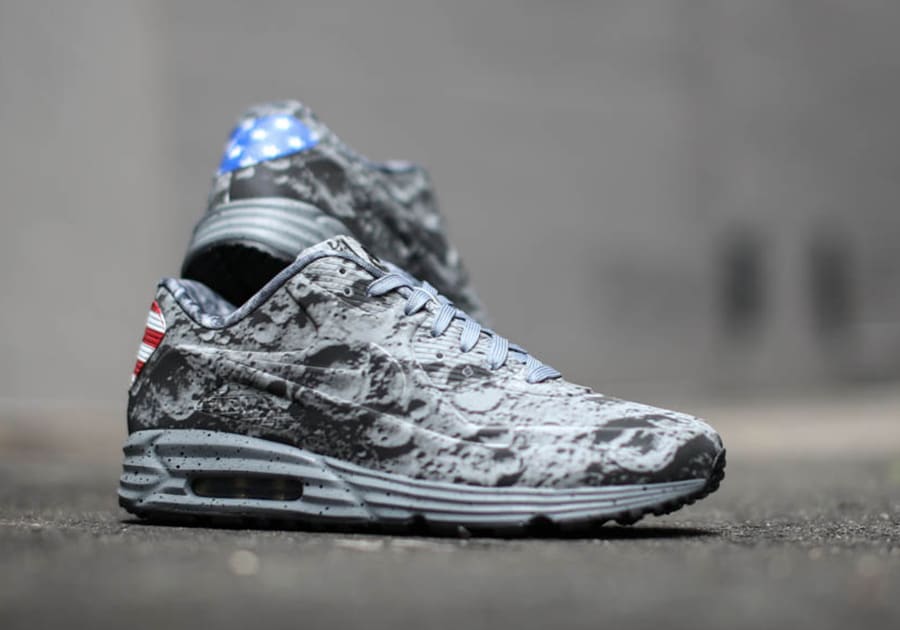 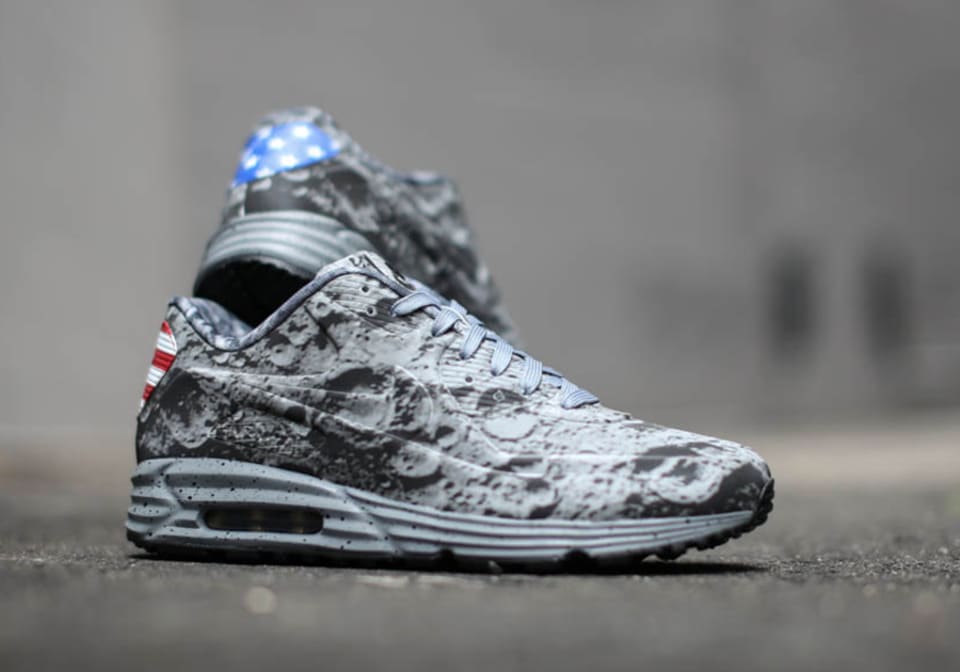 NASA's Apollo 11 has had an outsize influence on our culture since July 20th, 1969. That's the day the spaceflight mission successfully completed its lunar landing, paving the way for Neil Armstrong and Buzz Aldrin to become the first humans to ever set foot on the Moon. To this day, Apollo 11 remains one of the biggest achievements in the history of space exploration. It's only fitting, then, that those first steps Armstrong and Aldrin took have also made their mark on sneaker culture.

As we celebrate the 50th anniversary of Apollo 11 this week, we're showing you some of the best shoes that have drawn inspiration from the mission and its Moon landing. Brands such as Adidas, Nike, New Balance and Vans have all created designs paying homage to this historical feat, in official and unofficial ways. While there are sneakers that NASA has collaborated on, others simply look like they were meant to be Moon boots. Let's take a look and appreciate them one by one. Five years ago, on July 14th, 2014, Nike introduced what are arguably the best Moon landing-inspired sneakers to date: the Air Max Lunar 90 SP "USA." The sportswear giant took one of its most iconic models, the Tinker Hatfield-designed Air Max 90, and donned it with midsole graphics that mirrored the Moon's surface. To complement that, Nike put two American flag badges on the back of the shoes, which were designed to represent those found on Neil Armstrong's space suit.

The sneakers became so popular that they now resell for as much as $1,000, compared to their $145 retail price. Aside from his excellent basketball skills, NBA superstar Paul George is known for his PlayStation-themed Nike sneakers. But video games aren't the only element he's used to deck out his signature basketball shoes. He also loves space exploration. And since the introduction of his PG3 this past January, Nike has made him three different sneakers influenced by NASA, Apollo 11 and the lunar landing. The PG3 "NASA" and "Apollo Missions" feature the agency's traditional orange-and-blue colors and American flags, while the "NASA 50th" has an all-silver, reflective upper with NASA and Apollo 11 badges throughout.

While they each look different in terms of color, they do have a couple of things in common. One is a quote from Paul George that reads, "Don't tell me the sky's the limit when there are footprints on the Moon," and the other is that the outsoles all have details meant to resemble lunar footprints. Unlike the NASA sneakers Nike made for Paul George, these Adidas NMD Hu Trail "CLOUDS MOON" aren't an official collaboration with the space agency. Still, nothing says lunar inspiration more than having the word "MOON" plastered across an entire shoe. Beyond that, the pair features a black-and-grey color scheme that's reminiscent of the Moon. And in case you had any doubt where the design cues for these NMD Hu Trails came from, just know that their designer, Pharrell Williams, is part of NASA's festivities for the 50th anniversary of its historic Moon landing today.

The "MOS NB 574" sneakers are right up there with Nike's Lunar90 SPs for the title of Best Moon Landing Sneakers. For these, New Balance partnered with clothing store Ministry of Supply on a pair that takes plenty of visual cues from the Apollo 11 lunar mission. The companies said the idea was to "take advantage of the radically engineered technologies that power our clothing to take a small step forward in sneaker design." That's why you'll see a grey silhouette made out of "Lunar suede" that's intended to represent the way Neil Armstrong described the surface of the Moon: "Fine and powdery... like powdered charcoal."

Better yet, the MOS NB 574 shoes (which launched last year) came in a sealed packaging that automatically makes you think of those freeze-dried astronaut meals. You can't talk about sneakers without mentioning Vans. And to honor Apollo 11, the brand created a special edition of its high-top SK8-Hi sneakers, featuring an all-black leather upper with patches paying homage to NASA, the Apollo 11 mission and astronauts who walked on the Moon during the expedition. Vans took it a step further by making an entire collection out of its "Space Voyager" theme, which had sneakers, apparel and accessories with appreciation to the Voyager 1 and 2 outer planetary space missions. Mercer Amsterdam may not have the same brand recognition as Adidas, Nike, New Balance or Vans, but the brand came up with one of the sleekest Moon landing-themed sneakers. The "W3RD NASA Apollo 11s" were designed with Armstrong and Aldrin's space suits in mind, as shown by the white, blue and red accents that made the shoes feel vibrant. Those details were complemented by a small NASA logo on the upper, along with a silver mesh fabric that ran all across the sneakers. But the best part may just be the subtle coordinates written near the toe box, 28.5729° N, 80.6490° W, which point to Kennedy Space Center -- the launch site for Apollo 11. So, so lovely. The Adidas Kobe Two, which were designed for former NBA superstar Kobe Bryant, had nothing to do with NASA or Apollo 11. Well, aside from the fact they became known as the "space Moon boots" among sneakerheads, due to their chunky, futuristic and silver-colored nature. Out of all the models we've talked about so far, these are definitely the ugliest ones of the bunch. And yet, somehow the simple fact that they became the Kobe "space Moon boots" makes them interesting. That shows you the cultural pull of NASA, Apollo 11 and, of course, the Moon. Maybe Adidas should bring them back and see what happens. In 2014, General Electric decided to honor Apollo 11 with "The Missions," a pair of limited-edition, high-top sneakers that could easily pass off as Moon boots. GE played a key role in NASA's 1969 lunar expedition, and the company wanted to commemorate its contributions with gray-colored shoes that had a translucent, thermoplastic sole. According to GE, The Missions featured materials made from the same lightweight carbon fiber that was used in "bad ass" jet engines, as well as a hydrophobic coating akin to the one that keeps wind turbine blades from freezing in cold temperatures.

To celebrate the 45th anniversary of the Apollo 11 Moon landing, GE created only 100 pairs, which were sold for about $200 each. If what you wanted were high-tech, Moon-inspired sneakers, The Missions are it. And the pièce de résistance goes to Nike's "Moon Shoes," which were created in 1969 by the company's legendary co-founder Bill Bowerman. Nike says that the sneakers got their name thanks to the distinctive marks they left in dirt, which is said to resemble the footprints made famous by Armstrong and Aldrin when they took their first steps on the Moon. That imprint was a result of a now-iconic waffle iron-inspired outsole pattern, which was invented by Bowerman the same year as the Apollo 11 mission. Not only was this the first shoe to sport the technology, but it was Nike's first-ever shoe as a brand.

There are only about 12 of these in existence, and their cultural significance is so deep that a pair is expected to collect more than $100,000 in a Sotheby's auction. The starting bid is only $80,000, if you're looking to own a piece of Nike (and Moon) history.

In this article: adidas, apollo, apollo1150th, design, entertainment, new balance, nike, space, tomorrow, vans
All products recommended by Engadget are selected by our editorial team, independent of our parent company. Some of our stories include affiliate links. If you buy something through one of these links, we may earn an affiliate commission.