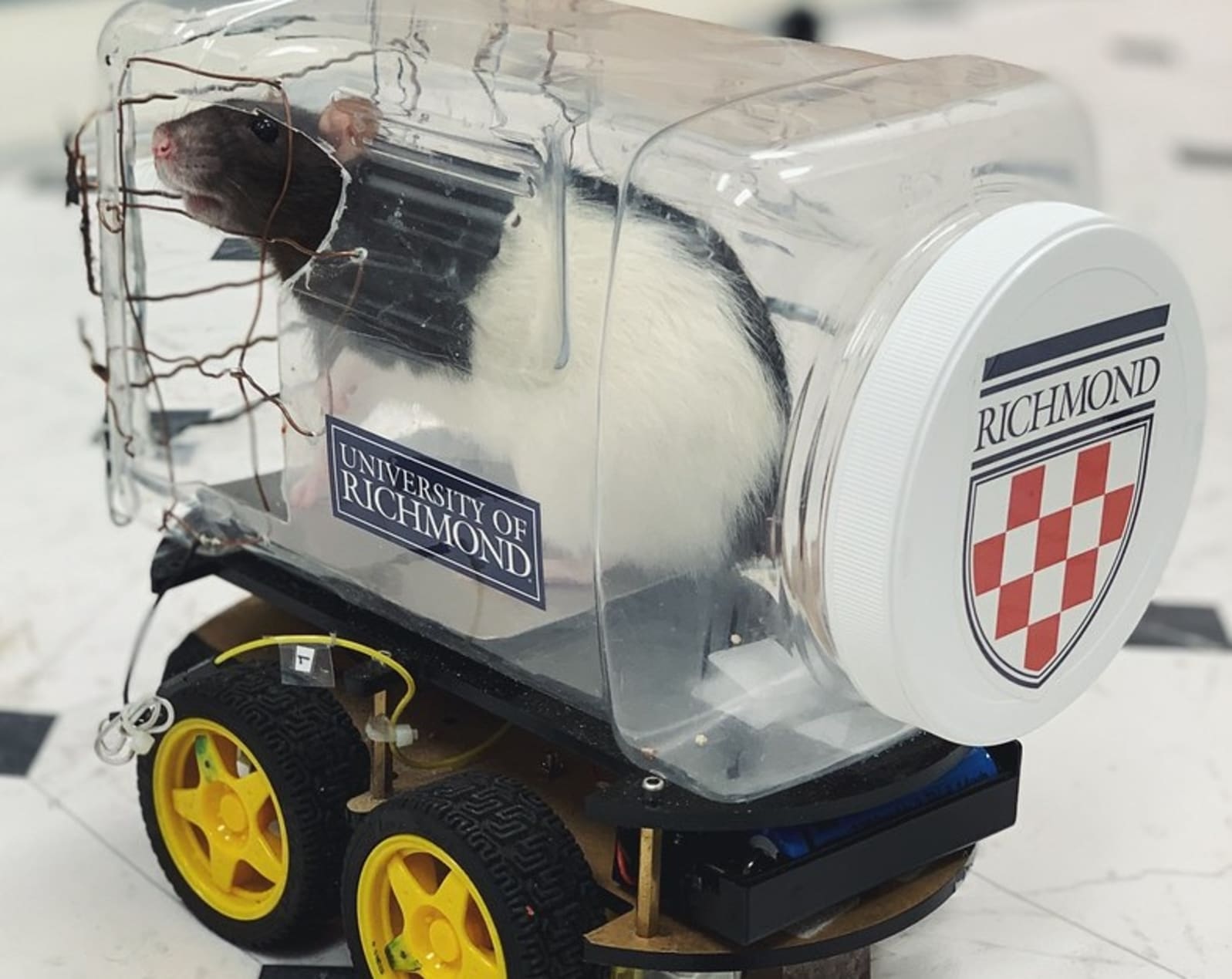 We now have an answer to the age-old question of whether rats can learn to drive a vehicle, and the result is a resounding yes. What's more, the vermin even seem to find the whole endeavor relaxing.

Researchers at the University of Richmond in Virginia fashioned what may be the world's first Ratmobile out of a clear plastic food container. It's mounted on what appears to be a battery-powered, four-wheeled platform, with a piece of aluminum for the floor and three copper bars that function as a steering wheel. Rats were able the car to move forward when they stood on the floor and gripped the copper bars with their paws to complete an electrical circuit. The left, center and right copper bars also control steering, and the six female and 11 male rats were rewarded for successfully driving with Froot Loops cereal placed at increased distances around the pen.

Psychology professor Kelly Lambert, a neuroscientist who led the study, told New Scientist that rats have previously been shown to be able to recognize objects, press bars and find their way around mazes. But she and her colleagues wanted to see whether rats were able to learn the more sophisticated task of operating a moving vehicle.

'They learned to navigate the car in unique ways and engaged in steering patterns they had never used to eventually arrive at the reward," Lambert told the publication.

Lest you think this is merely a stunt destined for the late-night TV talk show circuit, there is an important finding here: Learning to drive seemed to have a relaxing effect on the vermin, as measured by their levels of corticosterone, a hormone that spikes in stressful situations, and dehydroepiandrosterone, which counteracts stress. The ratio of the two hormones was flipped in the rats and increased the more they drove.

The rats that lived in a complex and stimulating environment learned how to drive much faster than the rats who lived in a dreary laboratory, Lambert told Business Insider.

Lambert has apparently done previous work that found that rats experience a reduction in stress after they master difficult tasks, like digging up buried food, suggesting they may experience the same kind of satisfaction people feel after perfecting a new skill. The team also found that the rats that drove themselves were less stressed than rats that were driven around as passengers in remote-controlled cars.

The practical takeaway from all of this is that researchers could substitute driving tests like this one for more traditional maze tests to study things like the effects of Parkinson's disease on motor skills and spatial awareness.

Next up are follow-up experiments to try and understand how rats learn to drive and why it seems to reduce stress. We can't help but wonder whether that might include introducing the scourge known as traffic to the equation.

Source: University of Richmond
In this article: autoblog, experiment, gear, partner, ratatouille, rats, research, syndicated, transportation, University of Richmond in Virginia
All products recommended by Engadget are selected by our editorial team, independent of our parent company. Some of our stories include affiliate links. If you buy something through one of these links, we may earn an affiliate commission.