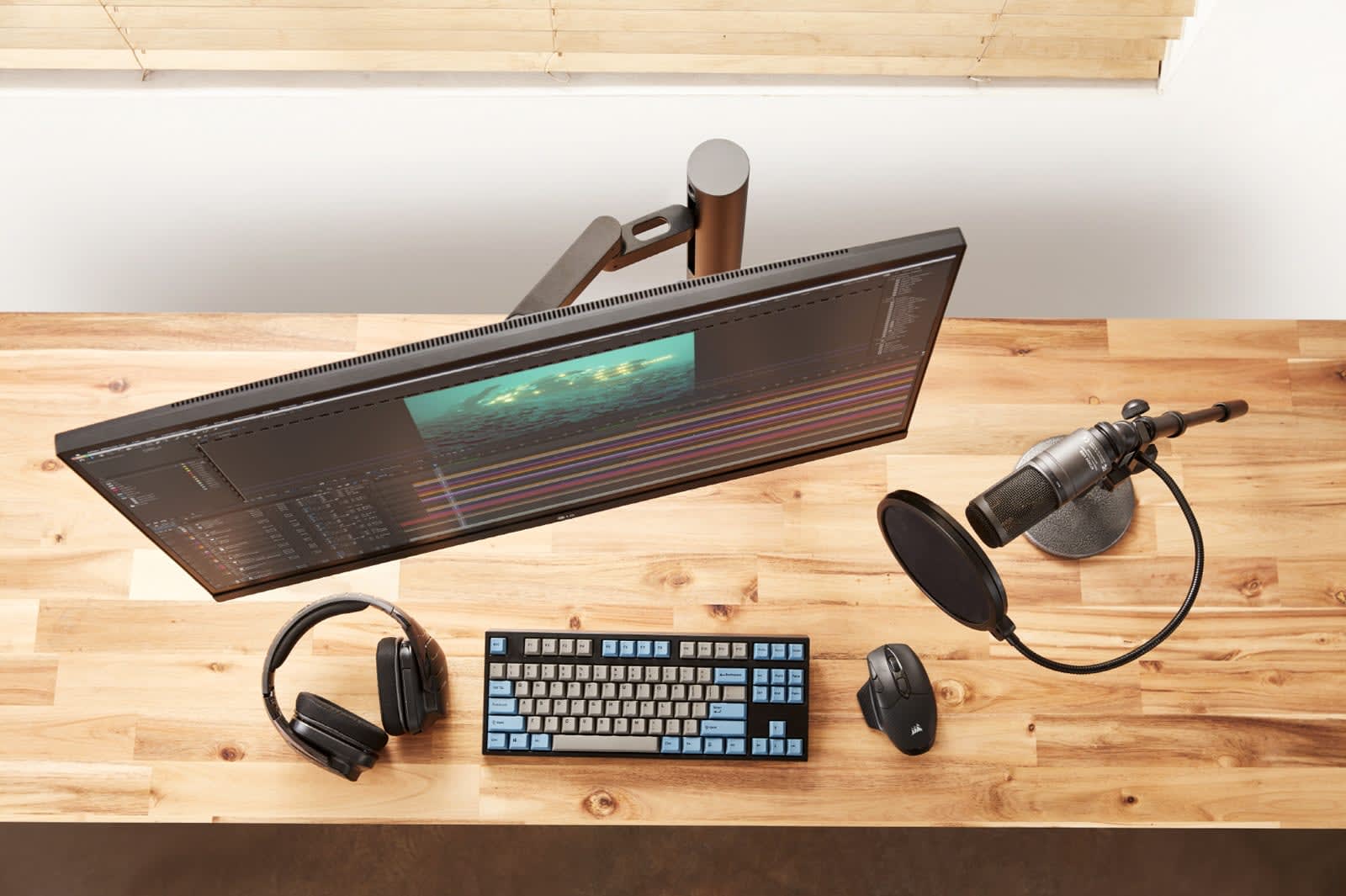 LG is fond of unveiling monitors before CES, but its newest batch may be particularly interesting if you value every inch of free space on your desk. The headlining monitor for 2020 is the UltraFine Ergo (32UN880), a 32-inch 4K screen that floats on a post that clamps to your desk. It's like you're buying a VESA mount at the same time, in other words. This helps make room, of course, but it also lets the monitor swivel up to 280 degrees horizontally and tilt 25 degrees vertically. You can position the display right where you need it for your creative workflow, or spin it around to show a project to a colleague.

The IPS panel is unsurprisingly aimed at creatives with 95 percent DCI-P3 color gamut coverage, HDR10 support and ports that include USB-C, DisplayPort and two HDMI ports. It's not meant as a gaming monitor, although FreeSync support and a 5ms pixel response time will at least make it competent. You're covered if you do want a 4K gaming monitor. It's introducing 27-, 34- and 38-inch UltraGear displays (the 27GN950, 34GN850 and 38GN950) that are slight tweaks on what you saw in mid-2019, including stronger stands. The centerpiece remains the rare combo of color-rich IPS panels with an extra-quick 1ms pixel response rate. The exact performance you get depends on your choice of screen size. All three tout 144Hz refresh rates (overclockable to 160Hz) and G-Sync compatibility, but you'll need to choose either the 27- or 38-inch model if you want brighter DisplayHDR 600 support -- the 34-incher is capped at 'just' DisplayHDR 400.

And yes, it wouldn't be an LG monitor launch at CES without an ultrawide option. It's debuting a 38-inch Curved UltraWide (the 38WN95C) that appears to cover all the bases. The 3,840 x 1,600 screen touts IPS, a 1ms pixel response time, G-Sync compatibility and DisplayHDR 600 support, but it's even more accurate than the Ergo with 98 percent coverage of the DCI-P3 space. There's a Thunderbolt 3 port, too, so this might be ideal for Mac users and anyone else who wants one high-speed cable between their monitor and computer.

LG hasn't discussed pricing or availability, although both are likely to vary from region to region. It's safe to say these screens won't be cheap. On the surface, at least, there are few areas where you'll find major compromises.

Source: LG Newsroom
In this article: 32un880, 4k, ces2020, display, games, gaming, gear, lg, monitor, peripherals, personal computing, personalcomputing, ultrafine, ultragear, ultrawide, videogames
All products recommended by Engadget are selected by our editorial team, independent of our parent company. Some of our stories include affiliate links. If you buy something through one of these links, we may earn an affiliate commission.