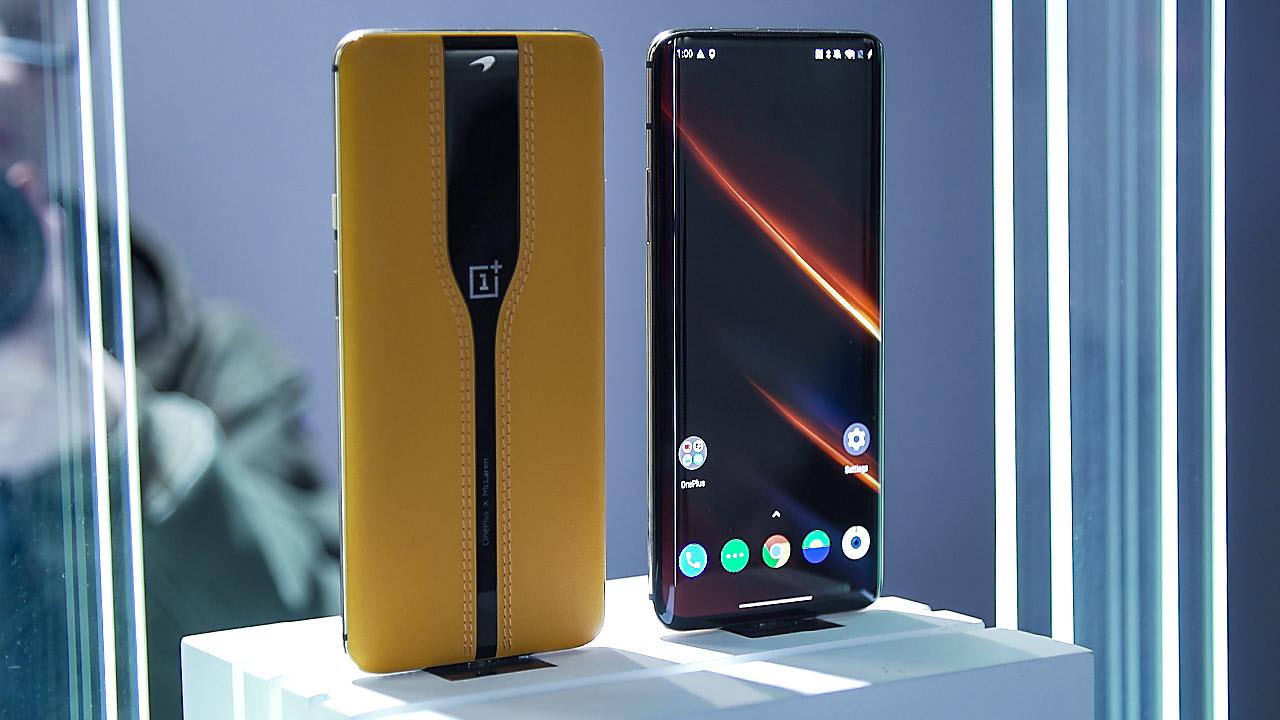 The OnePlus Concept One is a lot of things, rolled up into one. It's beautiful, clad in the same papaya-hued leather McLaren uses in some of its supercars. It's powerful... though since it's basically a gussied-up OnePlus 7T Pro, it'll probably feel less powerful once all those 2020 flagships launch. And maybe most of all, it's just sort of odd.

By now, you probably know what the phone's big draw is -- OnePlus hasn't exactly been shy about it. There's an incredibly thin slice of a material called electrochromic glass over the phone's rear cameras that turns opaque and transparent when voltage is applied to it. This is hardly new technology; the Concept One relies on the same sort of tech that makes those really cool airplane windows work. Getting it to work on a smartphone scale is still quite a feat, though. That seemingly solitary glass panel is actually made of five ultra-fine layers, the middle being that crucial electrochromic material. All told, OnePlus says they've been working with the thinnest electrochromic glass panels "in the industry." And perhaps more importantly, that shift from opaque to transparent happens pretty quickly -- about 0.7 seconds, another industry speed record. It's a good thing, too. The last thing you'd want to worry about when you see something photo-worthy is waiting around for the nature of your smartphone's glass to change.

I spent about an hour launching and dismissing the Concept One's camera, just to see OnePlus's material science experiment in action. What can I say? The experience is very cool the first few times, and then you very shortly (and very naturally) stop paying attention to it after that. It is what it is.

All of this begs a bigger question. Why? Why did OnePlus call on its large R&D staff to take a feature found in pricey McLaren sunroofs and adapt it to work on a smartphone? Well, mostly for the same reason McLaren did it in the first place: Because it looks cool. It wasn't that along ago that single smartphone cameras were the standard, but these days you'd probably be hard-pressed to find a phone without at least two googly eyes peering out from its back. Maybe I've had to use so many phones over the years that I've grown sort of numb, but I've never had an issue with having multiple camera humps jutting out of my devices. It just doesn't bother me.

But if that's not you, if you abhor the way they look and feel and cause your phone to wobble slightly when it lays on a table, OnePlus's might be perfect for you. I can't argue with how clean the phone looks when the cameras are obscured, and for what it's worth, company spokespeople said the Concept One represents the "purest expression of OnePlus design."

Beyond that, this chameleonic glass does seem to have some practical benefits too, like the ability to act like a neutral-density filter for the camera. Long story short, it can reduce the amount of light entering the cameras by about three stops (the photographic equivalent of "a lot"), so you can shoot wide aperture shots with plenty of bokeh in Pro mode without worrying about overexposure. They're also really helpful for shooting video in bright situations, too, or so my producer told me while shooting our hands-on video.

So, yes, maybe OnePlus is right to try and push this particular envelope. Or maybe it's too expensive to produce at scale, or not durable enough to hold up to everyday living. We won't know for sure until OnePlus does a lot more testing. Still, the whole point of a concept phone is to get people thinking about what's possible instead of what's simply practical, and after chewing on the company's work for a while, I'm starting to hope they don't give up on this idea.

In this article: ces2020, gear, hands-on, mclaren, mobile, oneplus, oneplus concept oneplus concept one
All products recommended by Engadget are selected by our editorial team, independent of our parent company. Some of our stories include affiliate links. If you buy something through one of these links, we may earn an affiliate commission.