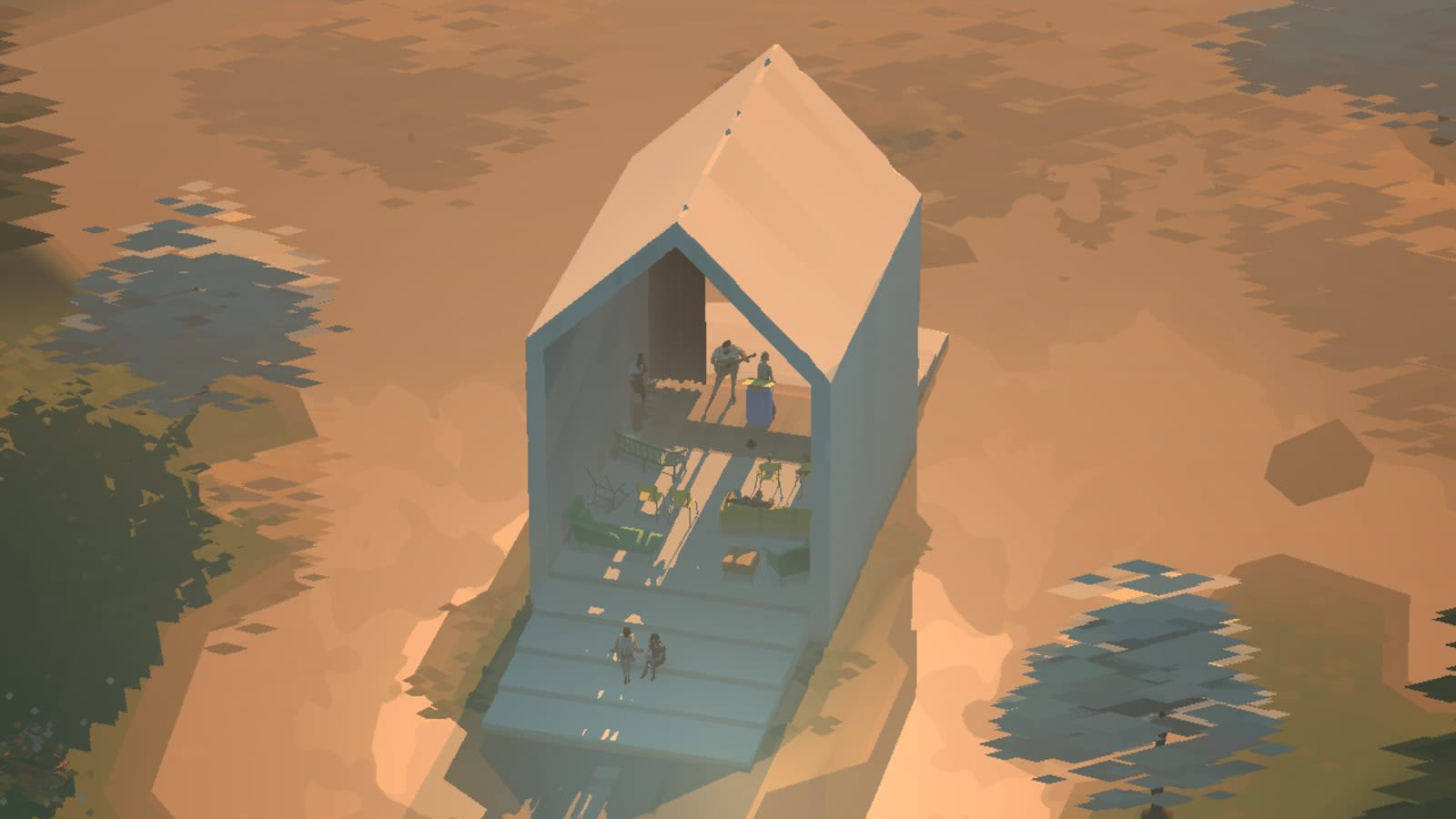 It's a beautiful sight. The ceremony is in front of a towering dilapidated barn that serves as the anchor for a pastoral artists' community buried deep in the Kentucky woods. The setting sun bathes the town in gold as residents gather around a mound of dirt and an open hole, sharing haunting poetry and a song about the two bodies inside. Everyone calls them The Neighbors.

It doesn't matter that they're horses. The ceremony is genuine and solemn, filled with memories of The Neighbors and the town in equal measure. Around the gathering, green fields are soaked with muddy water, remnants of the incredible storm that rocked the community the night before, flooding buildings and knocking out power. People are talking about leaving. Some have already fled, though their shadows still roam the streets. 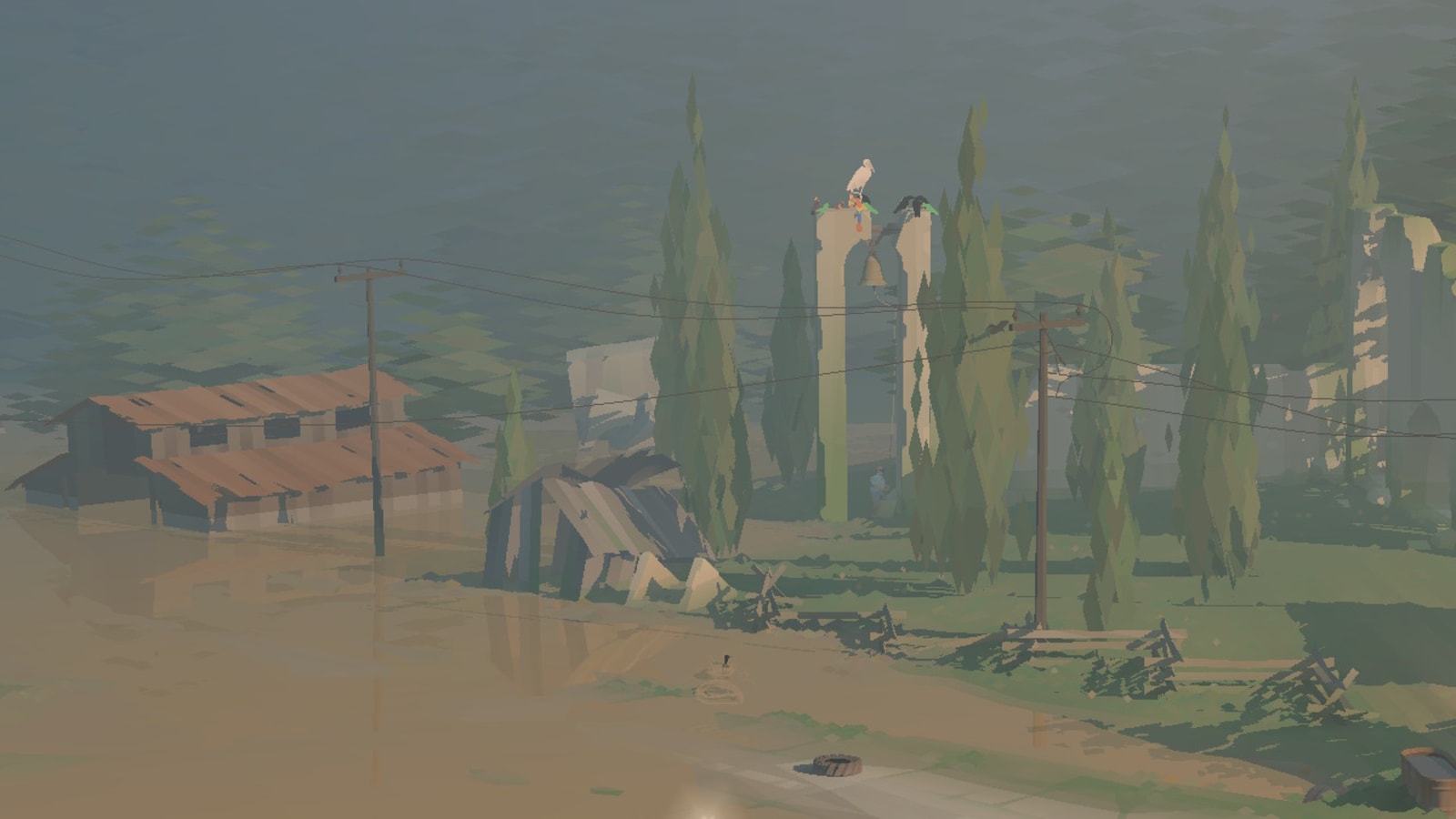 Others, newcomers, are considering staying. They talk about rebuilding. The old-timers tell them if they do, it'll be on top of a graveyard. Someone says everything is built over a graveyard. The ceremony ends, and folks wander away.

Players resume control of a lightning bug chased by a playful black cat, making its sleek form dart across flooded fields and past the giant well that leads to the Zero, a mysterious, monochromatic highway that operates outside the laws of physics and cardinal directions. As enigmatic as it is, the Zero is a constant factor of the first four acts, with players either looking for it or navigating its snaking pathways with a crew of misfits, alcoholics and orphans.

The Zero doesn't appear in the fifth act at all.

The cat slinks through the sunny, swampy town above the Zero, romping along haphazard neighborhoods built on the ruins of long-lost civilizations. Residents talk to the cat the way Conway, Shannon, Ezra, Junebug and Johnny used to speak to Blue and Val, the dogs they picked up on their way through the Zero. It's strangely familiar.

The cat eventually stops at someone's feet. The game ends.

Kentucky Route Zero is a game about ghosts. Fading memories, deserted boomtowns, dead friends, lost family members, unfinished projects, unkillable habits, unknowable truths. The first few acts are products of the sour-stomach instability of the Great Recession in the early 2010s, and they encapsulate the hopeless melancholy of the time.

Soulless corporations abandon the places and people they've helped build and destroy, respectively. Dark roads are littered with surreal imagery -- giant birds pick up people's houses as needed; factory workers transform into invisible radioactive skeletons; impossible roadways are carved through quantum-entangled tunnels. Characters fade in and out of the gameplay, each with their own path to follow, each with at least a small impact on the player's constructed reality. And by the end, the game is filled with tragic sunlight. 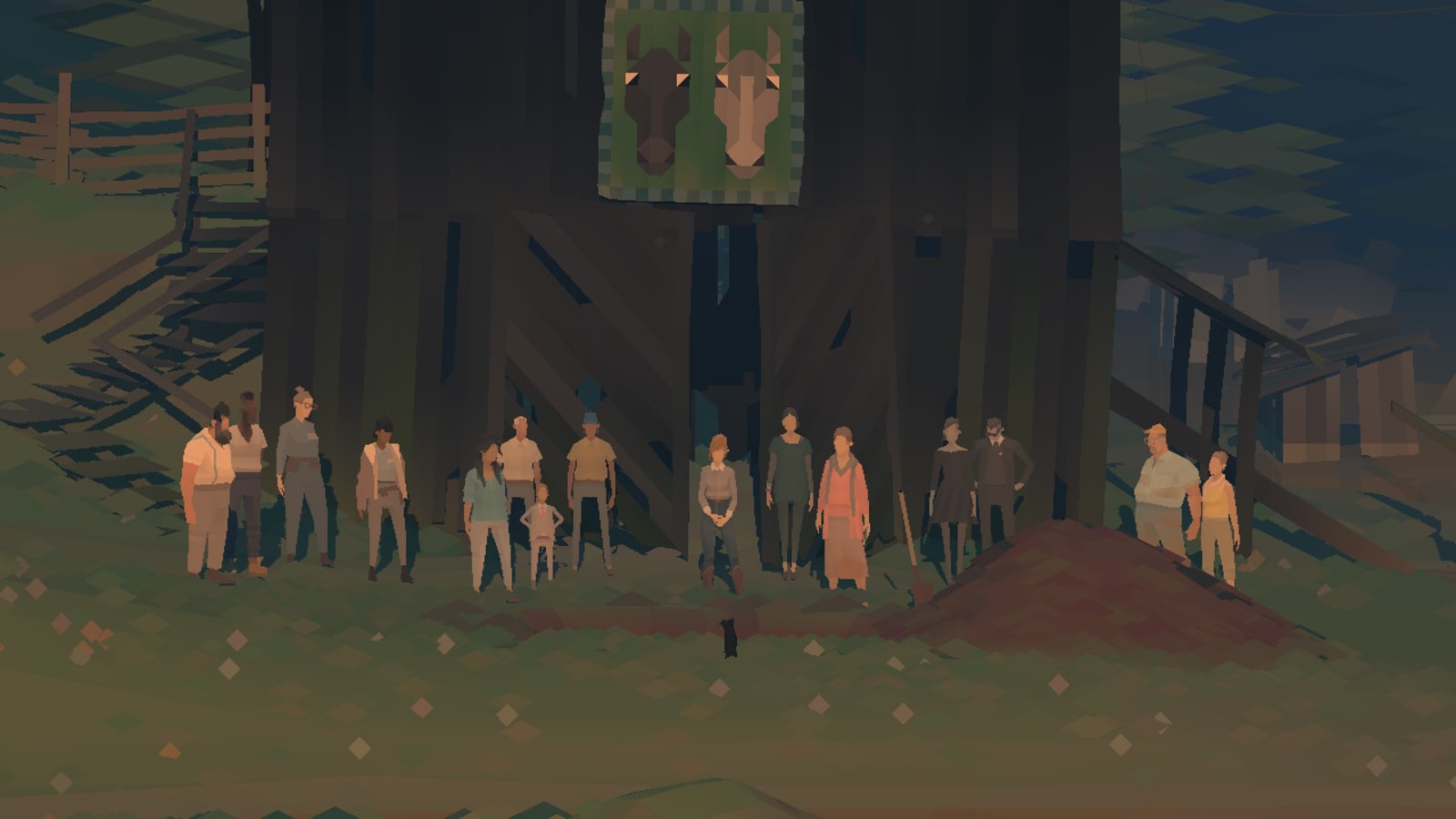 Playing as a cat -- well, a firefly leading a cat -- doesn't feel all that different to playing as a human. The black feline still craves human connection, finding interest in the people puttering around the town, listening to their stories and even having simple conversations with them, meowing in response to their attention. This is how the entire final act plays out -- as a cat running wild through a small town the day after a biblical flood. It's the same day as The Neighbors' funeral, and the same day a crew of outsiders arrive, laden with a truck of antiques destined for 5 Dogwood Drive. At the beginning of the day, no one lives there. By the end, it's packed with people and music. And a cat.

There's no wrong way to play Kentucky Route Zero, though there is one bit of advice for anyone diving into the final act on Steam or picking up the TV Edition for Switch, PlayStation 4 or Xbox One on January 28th: Don't neglect the interludes. Especially not the VR version of The Entertainment, the interlude between acts two and three. They may appear as subplots, but they're just as relevant to the story as any of the numbered chapters. Besides, there's no reason to rush to the end of this game. It's better to just slow down and absorb the ride. 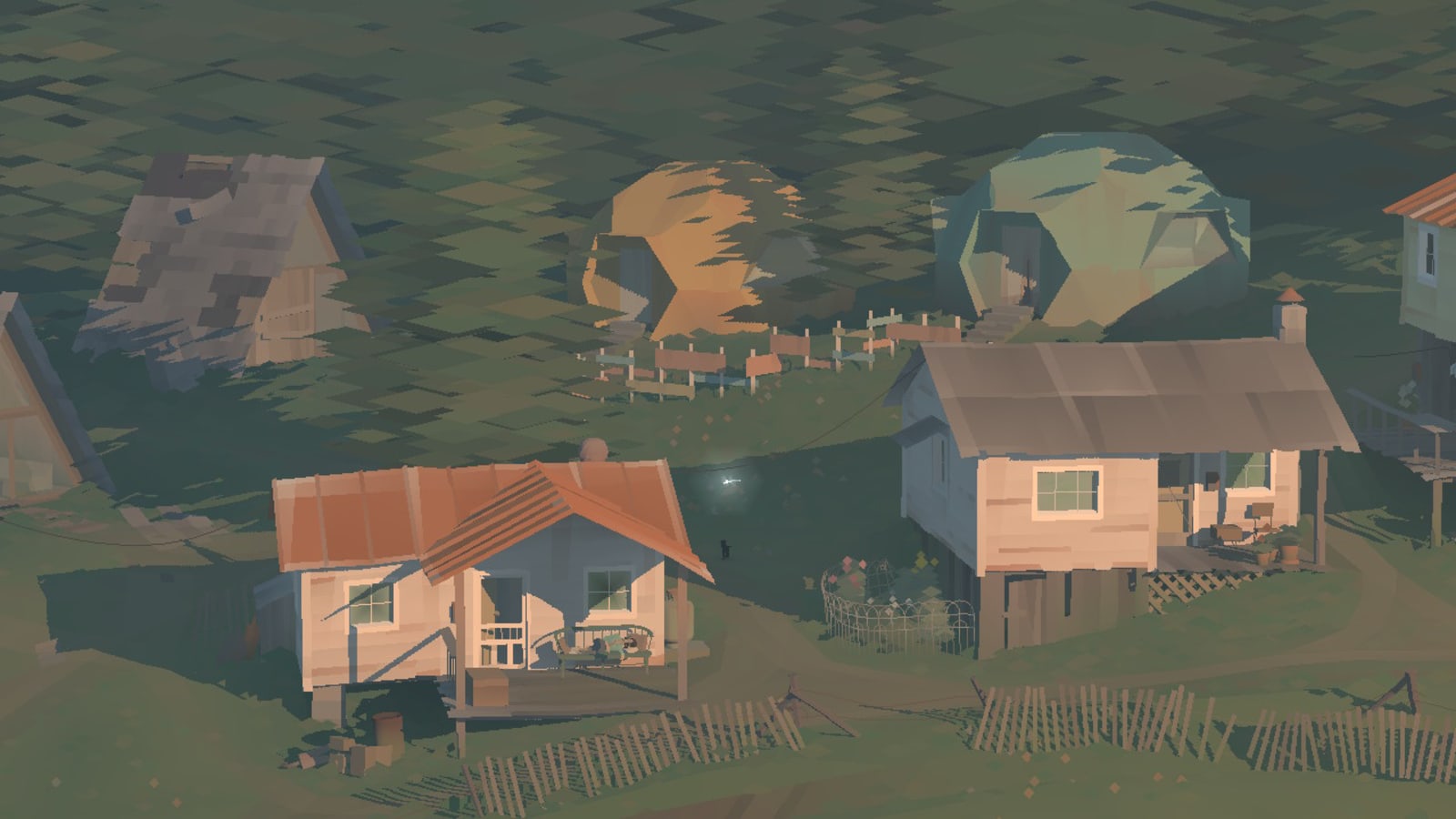 KRZ creators react to their quotes from seven years ago

Speaking of memories, ghosts and memories of ghosts -- the artist collective known as Cardboard Computer announced Kentucky Route Zero in 2012, and the first act landed on Steam in 2013. The game stood out for its striking visuals, handled by Tamas Kemenczy; its slow-burning narrative, courtesy of Jake Elliott and its haunting soundtrack, composed by Ben Babbitt.

Still, when Kentucky Route Zero was announced and its first act received a release date, plenty of people said they'd wait until all five chapters came out, so they could play it in one go. The first season of Telltale's The Walking Dead had just wrapped up, taking one year for all five episodes to land. So, it seemed reasonable that Kentucky Route Zero would be out, in full, in about a year. The artists of Cardboard Computer even said as much.

Turns out, it took seven years for the full game to launch.

I interviewed Jake Elliott at GDC 2013, in between the debut of acts one and two, and I asked him about the game's release schedule, its themes and its ending. Seven years later and on the eve of the final episode's launch, I read bits of this interview back to the Cardboard Computer team.

Here, Elliott and Kemenczy react to their 2013 goals for Kentucky Route Zero, starting with the pledge to release all five episodes within one year:

This puts the final episode of Kentucky Route Zero out in January 2014, one year after the launch of episode one. "It's pretty aggressive, but I think we've got our workflow down so well now that we feel good about it still," Elliott says.

First, Elliott laughed. Then he said, "I think a lot of that was coming from a couple different things, one of which is obviously inexperience. I don't know if it would have been possible to have any experience that would have prepared us for the way the project took shape. Very early on, we had this idea about this platformer, and we had all these mechanical constraints, like about a fixed number of levels and stuff. Even when that started to fall away and the game changed shape, I think we hung on to the idea of the scope somehow magically remaining the same, even though it was a different game underneath it."

To hit this initial goal, the Cardboard Computer crew would've had to develop one episode every three to five months. Looking back, Elliott calls that plan absurd.

"We just physically couldn't do it," Elliott said. "We really put ourselves through a lot of pain there. Like, Tamas developed repetitive strain injuries in his wrists and stuff from making all the art for act two in such a short period of time." 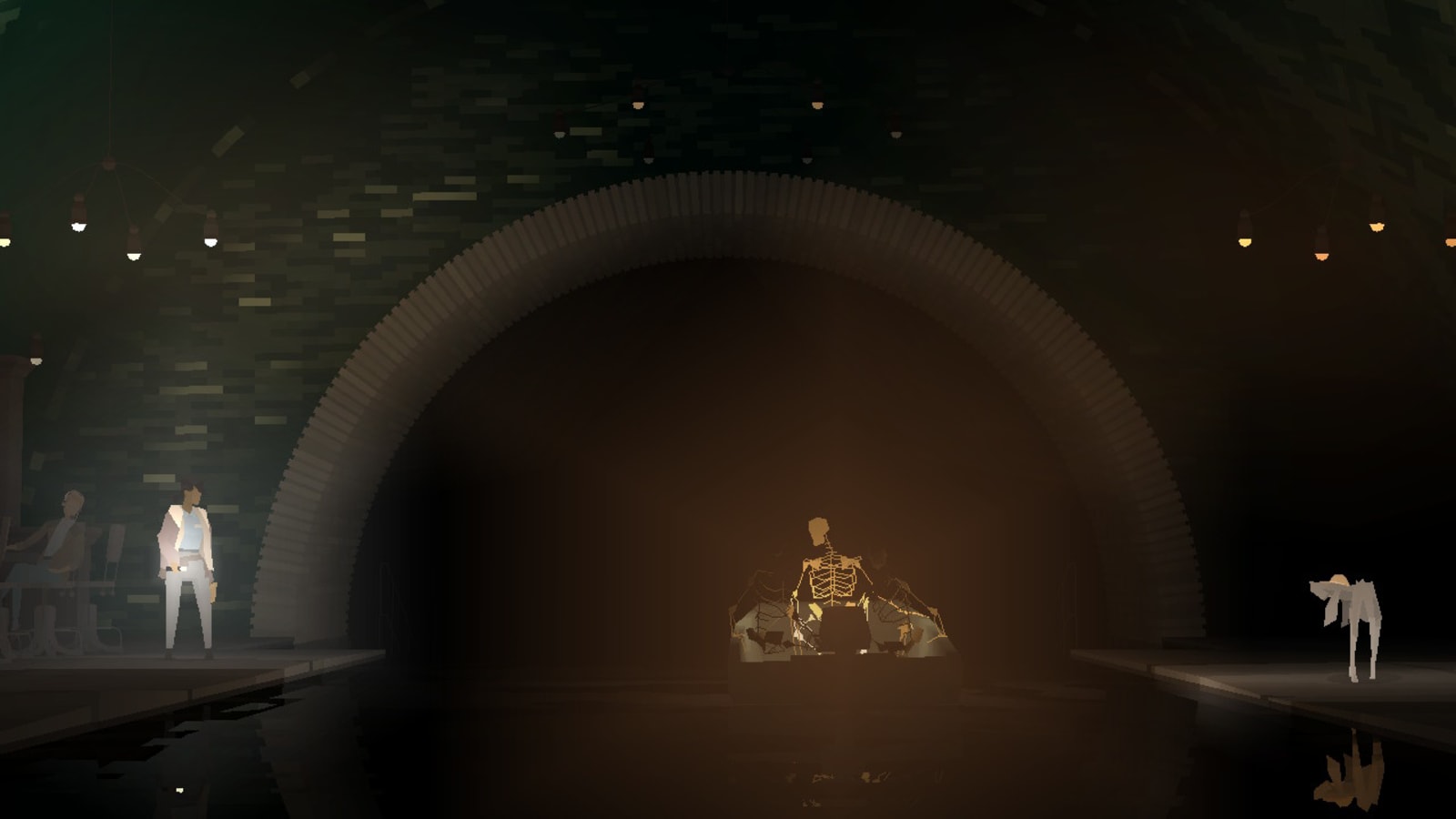 The only way the original schedule might-have-maybe worked would've been with a sudden infusion of cash-driven focus.

"Maybe if we had found a way to do it like that -- I don't know, maybe we would have taken on some investors and hired some more people or something," Elliott said. "Or I don't know, we could have maybe found some solutions to hit that timeframe. But it would've been a really different game, and I'm glad we were able to slow down a little bit."

Next, I asked Elliott about the message behind the game. Back in 2013, he said it was all about our real-world capitalist dystopia:

At its heart, Kentucky Route Zero is a game about credit default swaps, payday loans, sub-prime mortgages and health insurance loopholes. Really. "It's in there," Elliott says. "Those are the esoteric devices that express themselves in some of the situations that you do, these people who are dealing with all these credit problems, dealing with debt. Those are these things that, by design, are too mysterious and we can't understand them. In finance, they do that on purpose."

"I probably played it up and was too specific about that stuff, but I don't know," Elliott said, pausing to consider the words of his ghost. "I still feel that way, through these weird esoteric instruments that just immiserate us from the darkness. It is a sort of supernatural experience to be getting these weird bills in the mail with all this magical writing on them that's just going to fuck up your life for a little while. It's sort of the way that this weird -- structures and physical power and how they feel, you know?" 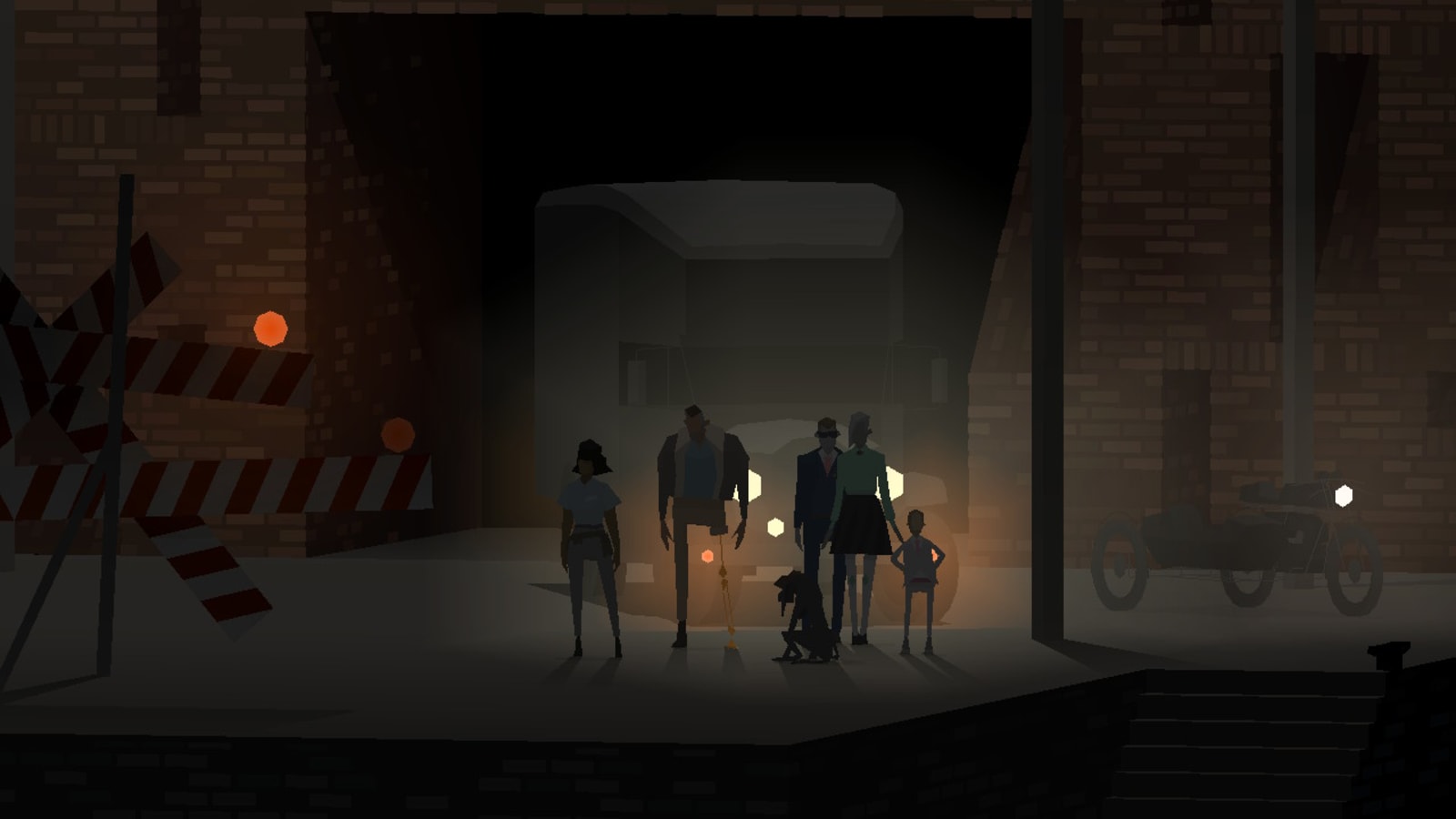 Game developers have a similar power, with the ability to shape a player's reality and then impose hidden restrictions on it. Elliott continued, "I like tabletop games, too, but in video games, I like that you can have secret rules that the player doesn't know about. You can't really do that in a tabletop game because the players are the ones responsible for adjudicating the rules. But in a video game, you can do this weird, mysterious, mechanical stuff that the player maybe never understands."

And finally, we talked about the end. In 2013, I asked Elliott if he knew how Kentucky Route Zero was going to conclude, and he said yes:

"It's a tragedy," Elliott says. "The story's a tragedy, it's a tragic ending. Hopefully it won't be too bleak, but it's in that tradition."

Tamas Kemenczy answered this one first.

Elliott agreed, and then clarified that tragedy doesn't equate hopelessness, in his mind.

"It's not pessimistic to me. Tragedy is not pessimistic," he said. "A lot of literary tragedies or dramatic tragedies, at the end the character who has made all these terrible mistakes or who has these terrible flaws... they usually have this moment where they sort of take responsibility for it, or in some other way transcend it. Spiritually, at least. Like Oedipus has this horrible disfiguration in the end, but he does it in order to sort of reconcile himself with fate, which was his mistake to start with." 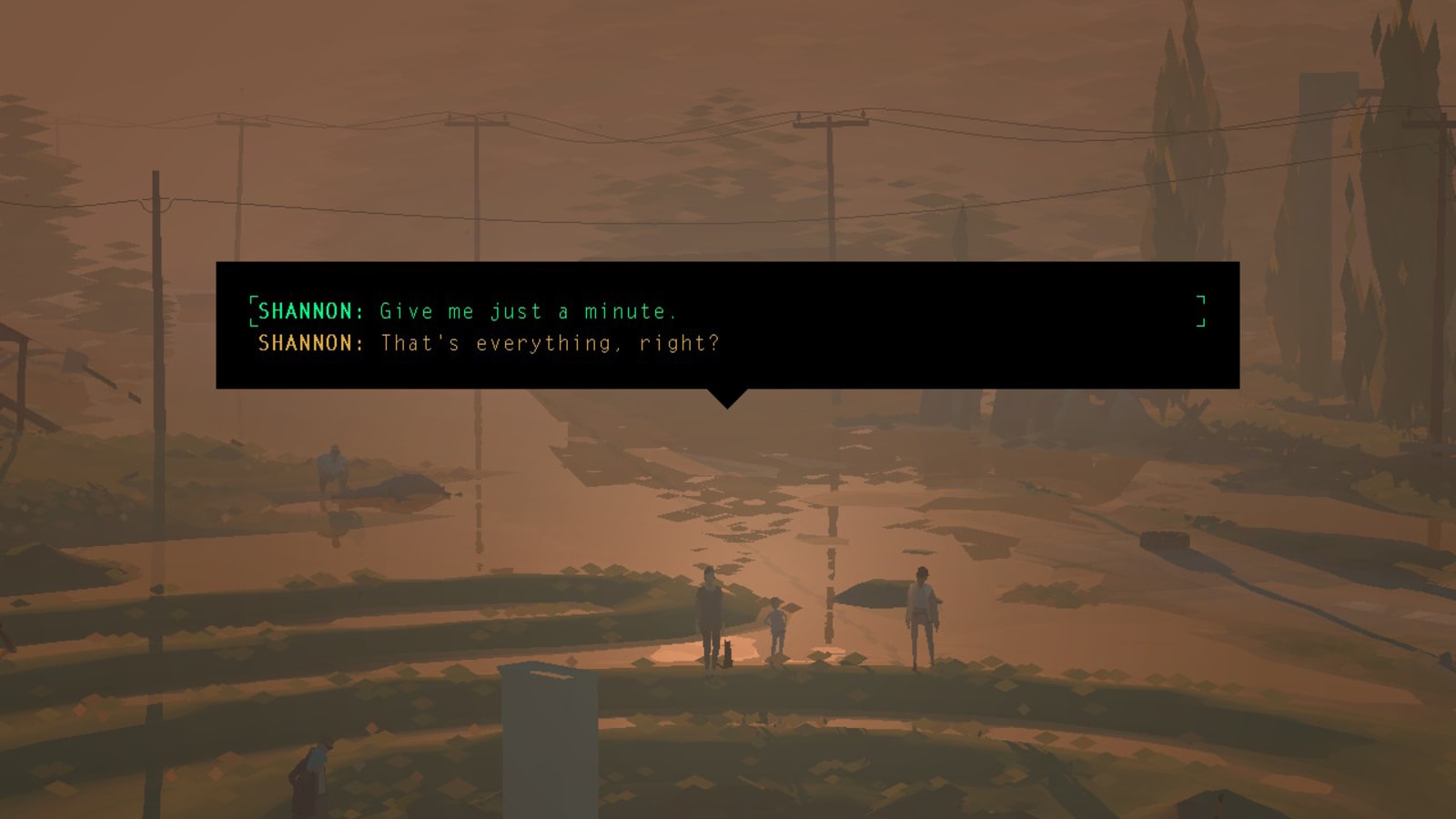 Tragedy is the logical conclusion to many of life's paths, so it's also infused in Kentucky Route Zero. In both places -- in reality and on-screen -- it's eerily beautiful.

"Similarly in Kentucky Route Zero, the characters are put in these terrible positions," Elliott said. "Conway gives himself over to this debt situation. But he's also done something really good, because this community has formed around him, and then he's moved himself out of the way in order for this community to thrive. That sort of built up around him. Tragedy can have a sad ending, but it doesn't mean that things are hopeless."

In this article: av, cardboard computer, gaming, hands-on, indie, kentucky route zero, personal computing, personalcomputing, ps4, steam, switch, video games, xbox one
All products recommended by Engadget are selected by our editorial team, independent of our parent company. Some of our stories include affiliate links. If you buy something through one of these links, we may earn an affiliate commission.