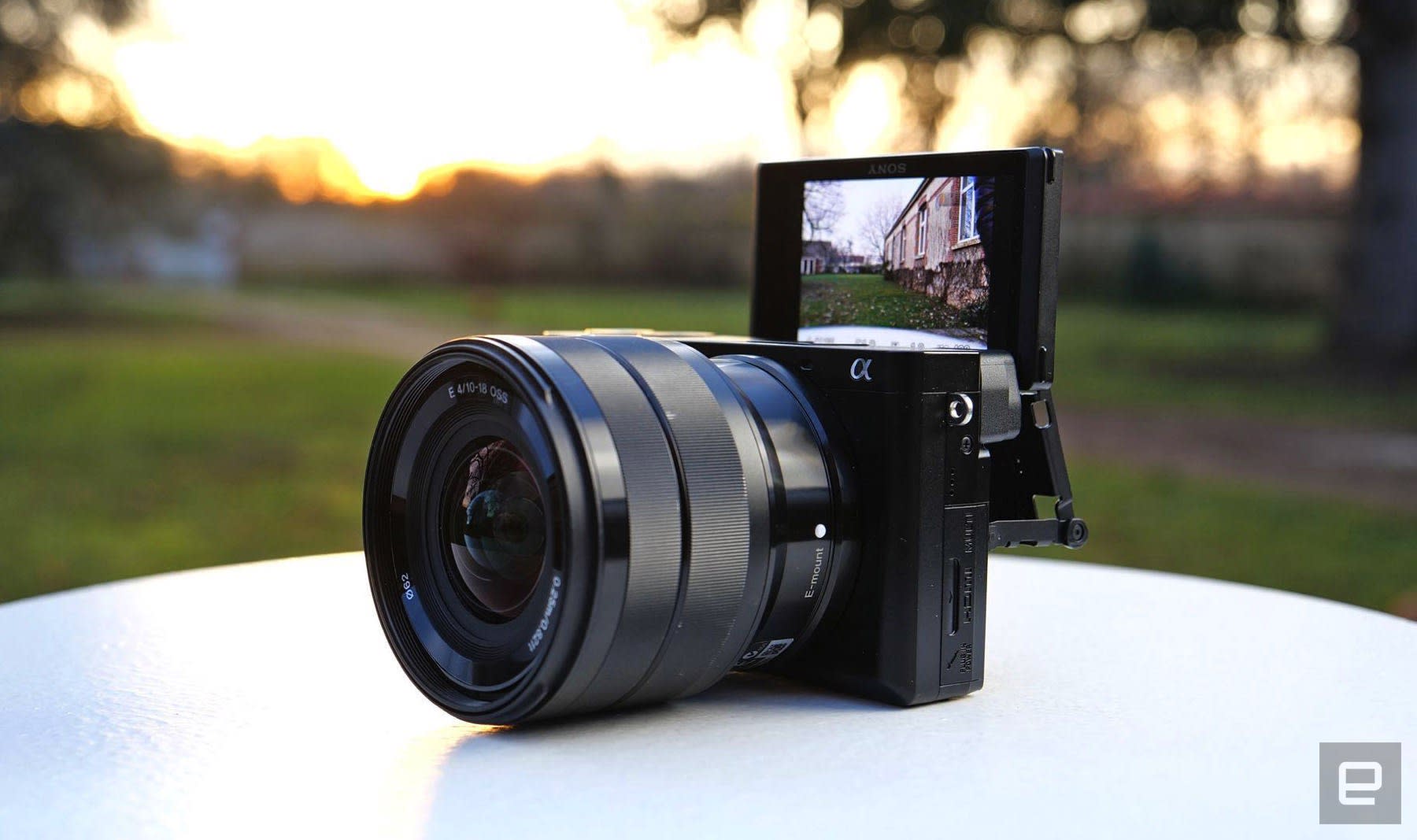 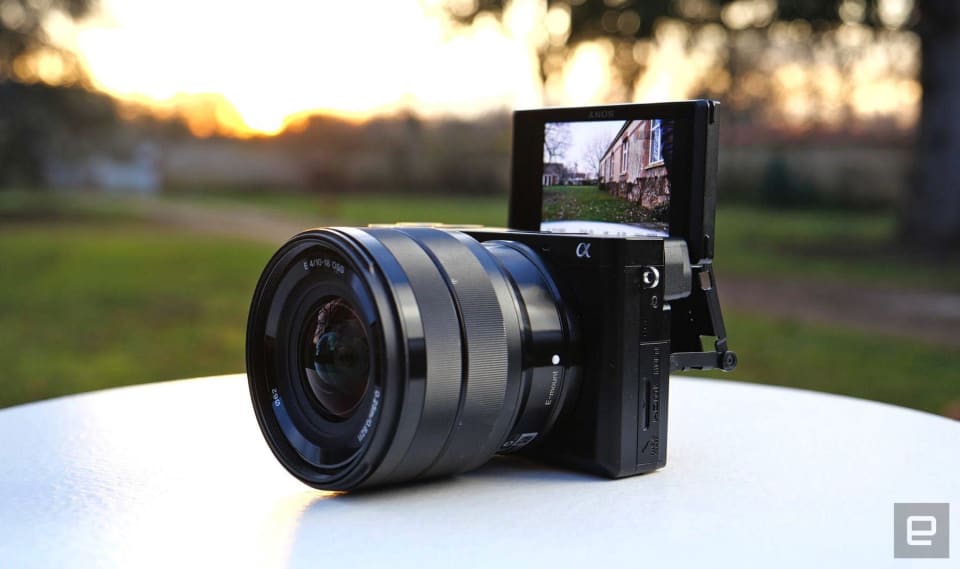 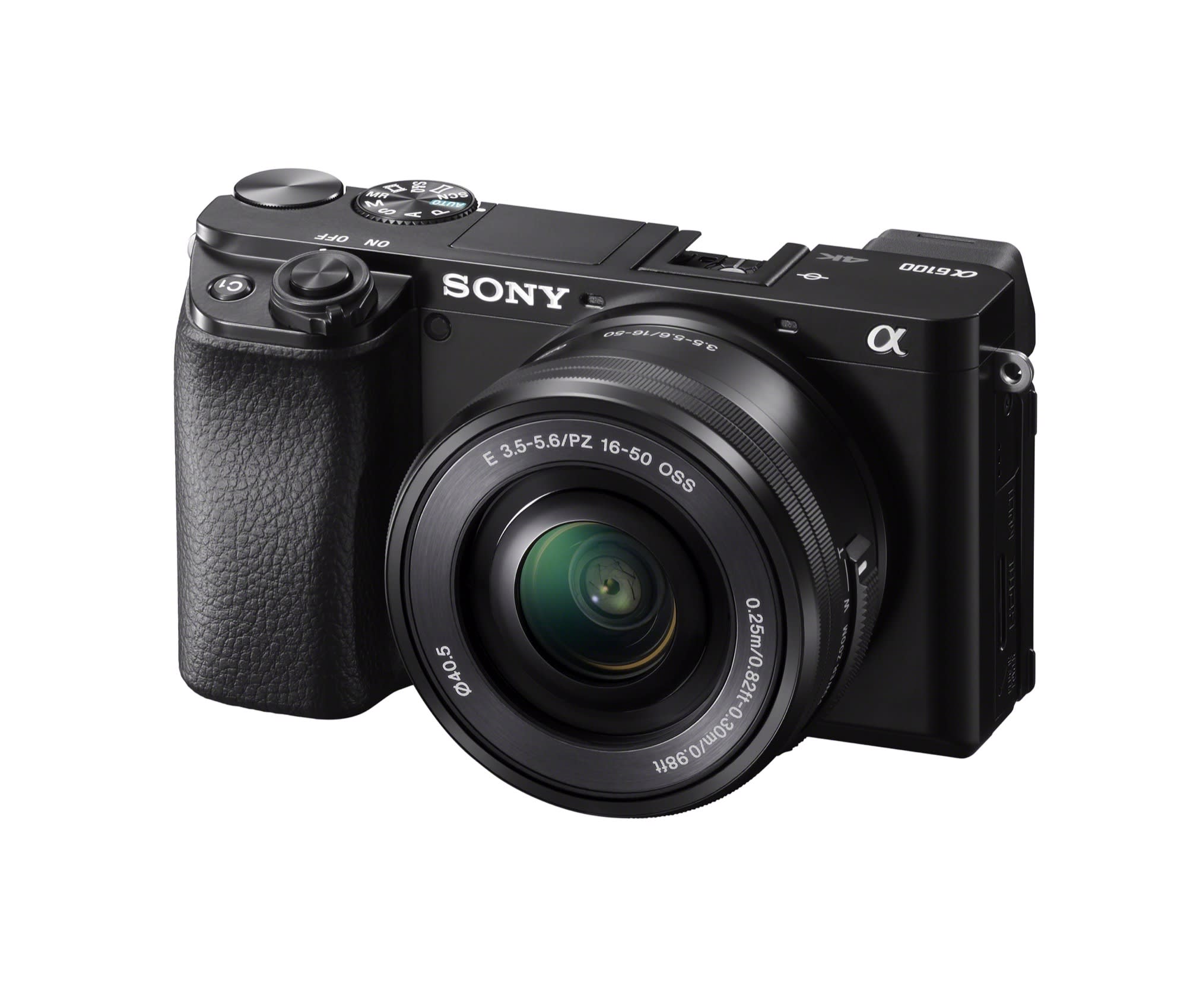 Despite all the talk about full-frame mirrorless cameras lately, APS-C is still extremely important for Sony. The A6000 in particular was a huge hit, thanks to the combination of good performance, features, compact size and price.

The 24.2-megapixel A6100 has the difficult job of replacing that classic, which came out way back in 2014. At that time, very few cameras could compete with Sony, but in 2020, the A6100 has some serious rivals, especially APS-C models from Canon and Fujifilm.

Sony has gradually refreshed its APS-C lineup, with the A6100 the last model to come, following the A6400 and A6600 -- neither of which I was terribly impressed with. Both have world-class autofocus systems but otherwise failed to keep up with rivals. At prices as low as $600, however, the A6100 has wider market appeal and less competition.

APS-C cameras are still important to Sony, and the A6100 is a big upgrade over the A6000. You now get a much improved autofocus system with intelligent face- and eye-tracking, along with 4K 30 fps video. Sony has also improved the color science and low-light capabilities, so photos are sharp and color accurate, even in dimly-lit environments. The drawbacks are bad rolling shutter, a low-resolution EVF and, as usual, a poor menu system. Still, the A6100 is the best camera in its price range, but for an extra $50, Fujifilm’s X-T200 is a better option for video.

Be the first to review the A6100?
Your ratings help us make the buyer’s guide better for everyone.
Write a review

The A6100 has largely retained all the design cues of past A6000-series models. I've never been a big fan because, to my eyes, these cameras are blocky and inelegant compared to Fujifilm's rival APS-C cameras. On top of that, the A6100 still lacks dials and buttons, forcing you to rely on the menu system, which is as hard to navigate as ever.

It's tough to find key settings like silent shutter mode and face/eye detection without a lot of hunting. The rear display doesn't help either, as you can't use the touch settings to access either the main or quick menus. Rather, it's dedicated to autofocus subject selection. Considering the A6100 aimed at beginners, I think it would have been wise to offer touch controls.

A popular feature of the last camera was its compact size, and the A6100 is still very light, weighing in at just 396 grams -- a bit more than Canon's rival M50. The shape of the camera, including the smallish grip, also remains the same as before.

I guess that Sony didn't want to mess with that winning formula. However, it would've been nice to have both front and rear dials, like Fujifilm's rival X-A7. 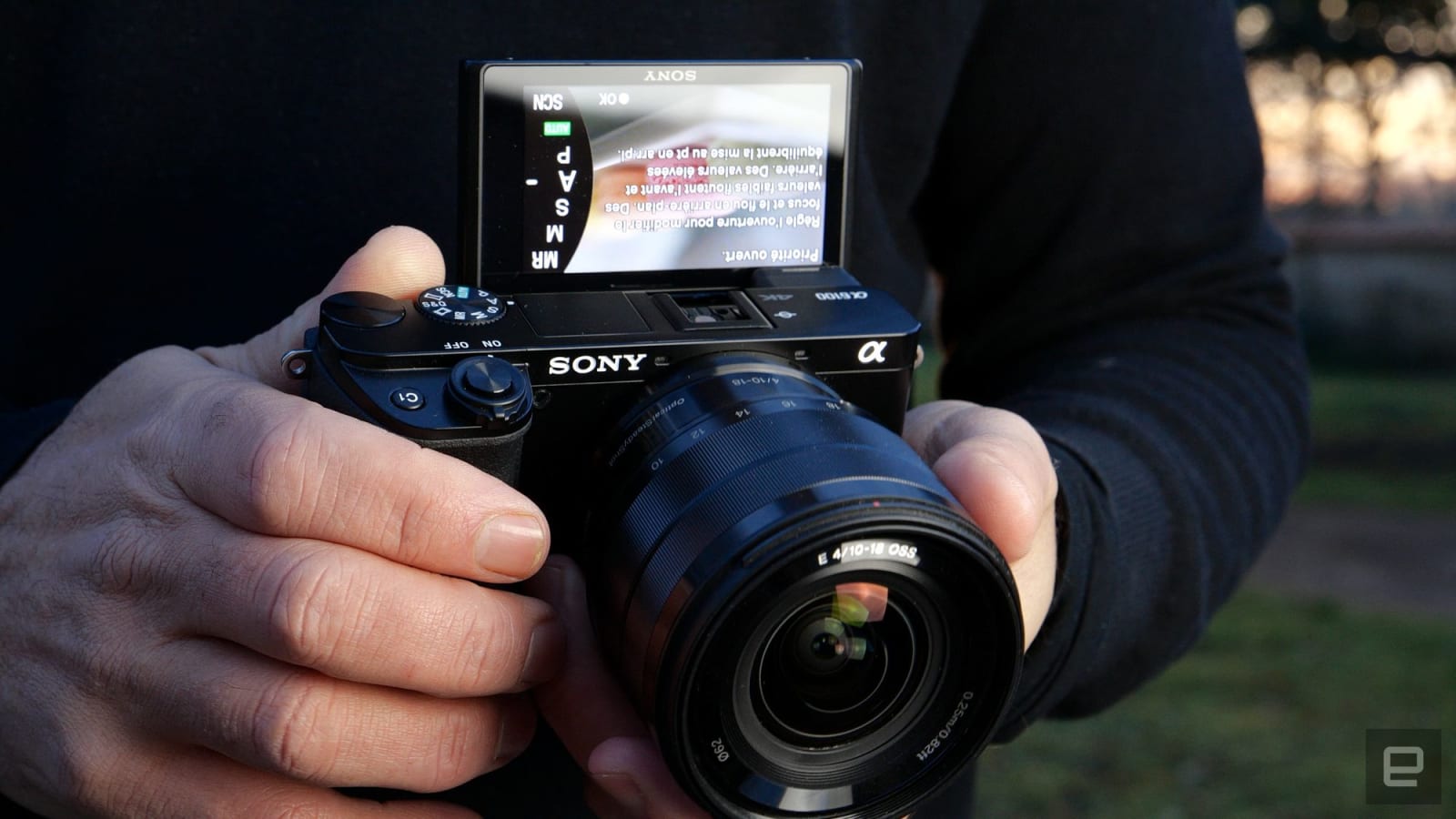 All that said, the A6000 had even worse ergonomics and menus. I suspect that many of the novice users who might buy this camera will stick to the automatic modes and treat it more like a smartphone.

The display, at least, tilts up and around, so you can use it for selfies or vlogging -- though I'd rather it had a fully articulating screen like Fujifilm's X-A7 or X-T200. Plus, the A6100 has a few issues around vlogging, so more on that in a bit.

The electronic viewfinder (EVF) is very basic with just a 1.44-million dot LCD display, the same as before. Still, it does the job, and some models in its price range, like the X-A7, have no EVF at all.

The A6100 has the same battery as before, too. However, the camera as a whole is much more efficient, so you can get a very respectable 420 shots per charge, compared to 360 on the A6000. I was able to shoot video for about two hours on a charge, which is also very good for this category.

As for the memory situation, the A6100 still just has a single UHS-I card slot. As such, you'll have no backup if the card fails and will see long buffering times after shooting in bursts. That said, the A6100's main rivals in this category don't support the more capable UHS-II card standard either.

Lenses are an important consideration when buying a camera, and Sony has a great APS-C mirrorless lens lineup, right next to Fujifilm. By contrast, Canon's M-series APS-C mirrorless lens selection is limited, and the quality of the glass isn't well regarded. If you're thinking of buying the A6100, Sony's 16-50mm is one of the worst kit lenses out there for optics and build quality, so I'd consider splurging for better glass. 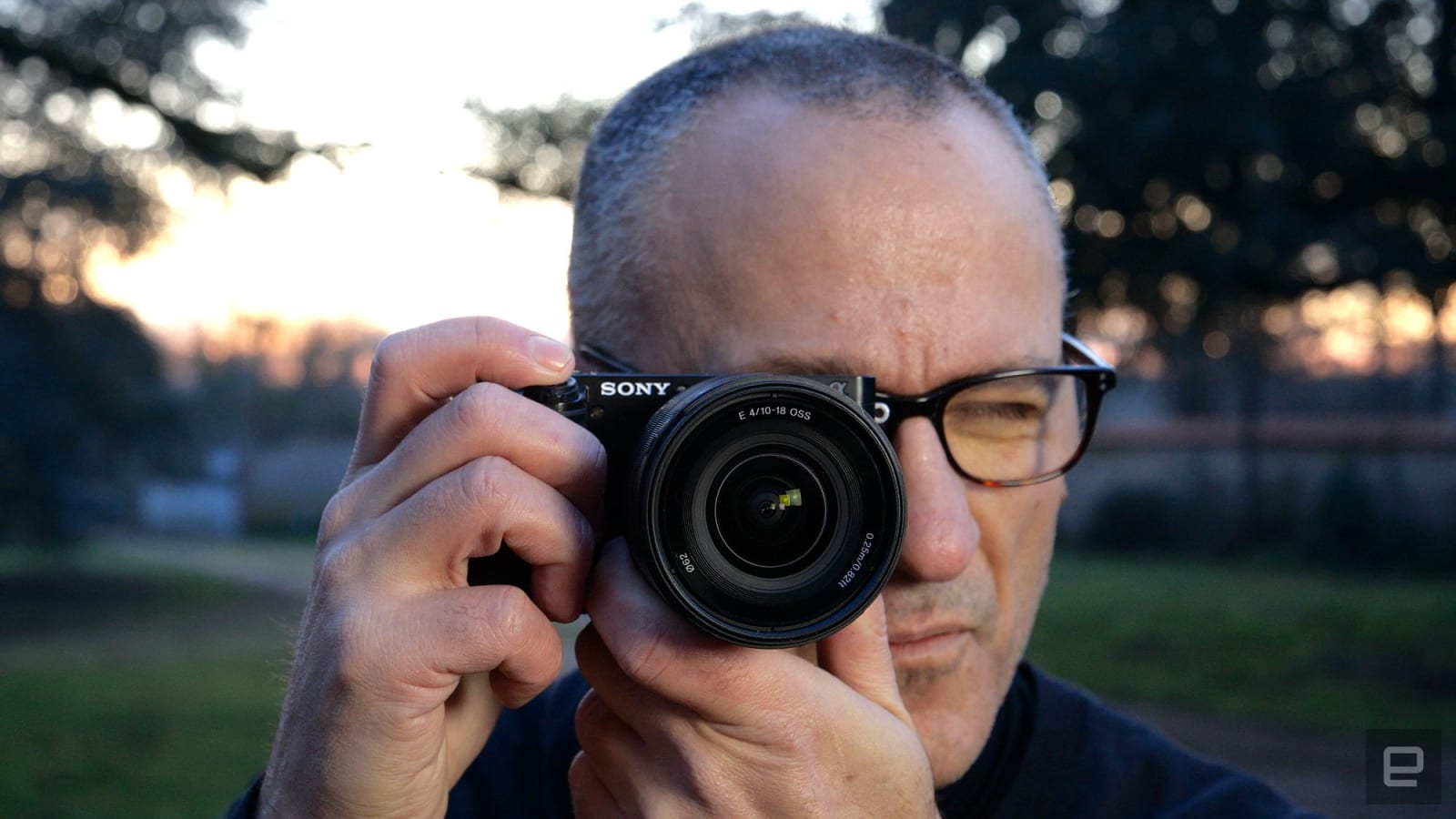 When you're looking at a combination of speed and autofocus, the A6100 is untouched among entry-level cameras. You can shoot at a best-in-class speed of 11 fps, and do so with continuous autofocus and auto-exposure turned on. That means when you use burst mode for kids, sports or other fast-moving subjects, you're bound to get sharp photos. There is a blackout between each shot, though, which can make it a bit tricky to track your subject. (The least expensive camera with no blackout is Fujifilm's $900 X-T30.)

The A6100 features 425 phase and contrast detect AF points, but it's more than the sum of its specs. Sony has really dialed in its sensor, processor and AI smarts to deliver an impressive autofocus system for an entry-level camera.

Whether you're using area or single-point autofocus, you'll nail focus either with single-shot or continuous burst shooting. And where the A6100 really shines is with face and eye tracking. That lets you put your camera in burst mode, point it at your subject and be sure to get their eyes and/or faces in focus. It even works with dogs, cats and other animals. 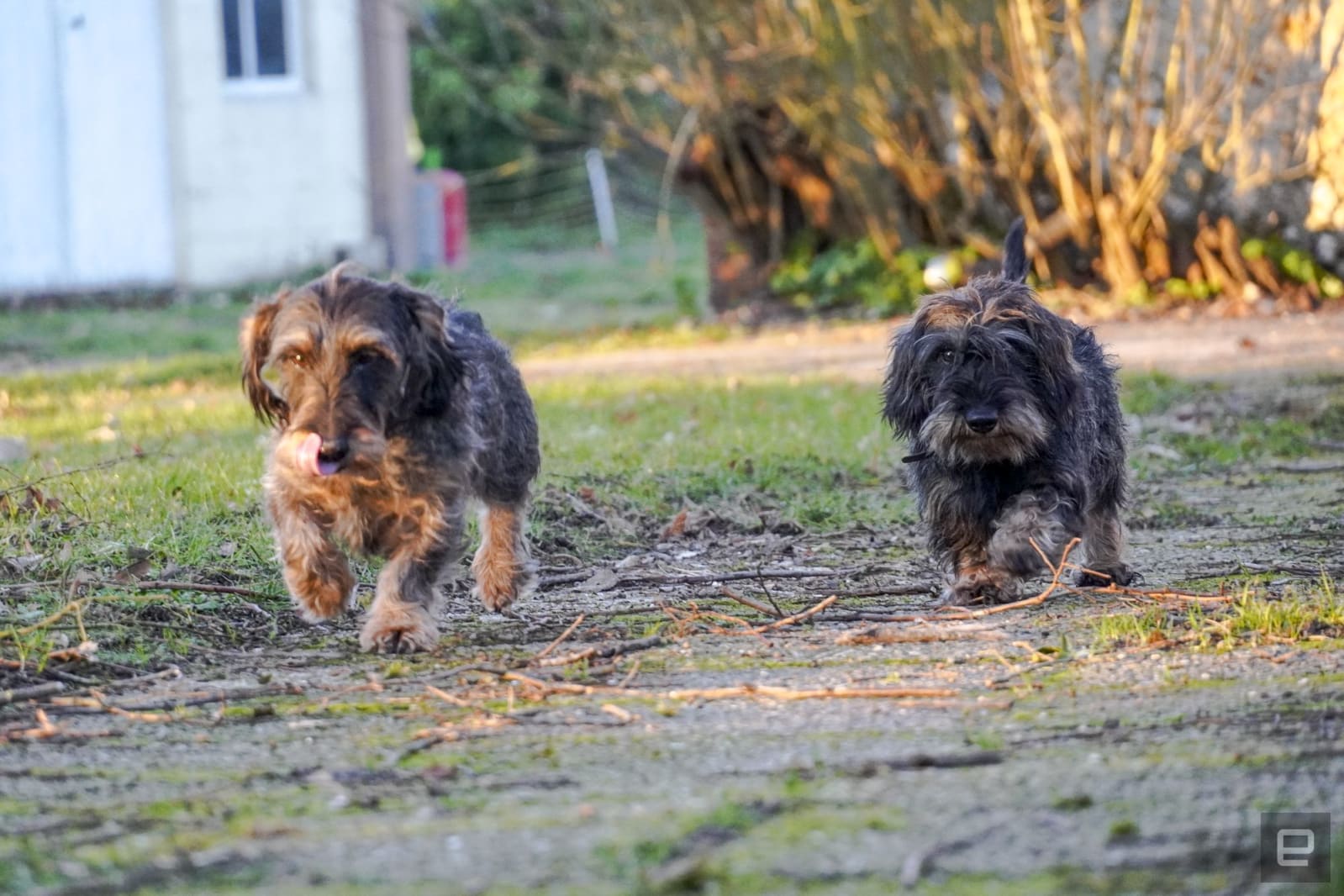 If your subject turns around or disappears from view, it'll pick them up right away when they come back. And if you have multiple subjects in a shot, you just need to select the one you want by tapping on the screen. You can also track non-living subjects (cars, etc.) just by tapping on them. The autofocus will do the rest, faithfully following them along.

Unfortunately, eye tracking isn't on by default, so you'll have to wade into those ugly menus to find that function. That's normally not a huge deal, except it might stump the novice users who will buy this camera.

Unlike some models from Canon, like the M6 II, Sony gives you silent shooting that also works in burst mode. However, beware that the 24.2-megapixel sensor has terrible rolling shutter, so you could end up with skewed shots if you try to shoot fast-moving subjects in silent burst mode. The problem is especially noticeable if you pan the camera quickly.

If you shoot using the 14-bit RAW setting (you have to set this manually as the A6100 shoots JPEGs only by default), you'll get a lot more flexibility when it comes to editing. It's especially good if you need to find more detail in the shadow areas, but it does help with skies if you overexpose them, too.

One issue is that images are still a bit too saturated in fully automatic "P" mode. That's where most beginners are going to start, so I guess Sony wanted to make sure they'd get colorful shots. The problem goes away if you simply switch to the semi-automatic shutter and aperture (S or A) modes.

All told, though, the A6100 delivers much more pleasing and accurate images than the A6000, especially in low light, despite sharing the same sensor. That's a pretty key point in this category, where people will primarily be using the camera for people-shooting activities, like parties, selfies and weddings, along with vacations, concerts and the like.

The A6100 is a big step up on the last model when it comes to video. You can now capture 4K at up to 30 fps with a full pixel readout (or up to 120 fps at 1080p), so it's really sharp. And Sony's changes to the color science means your video subjects will look more natural and true-to-life, as well. 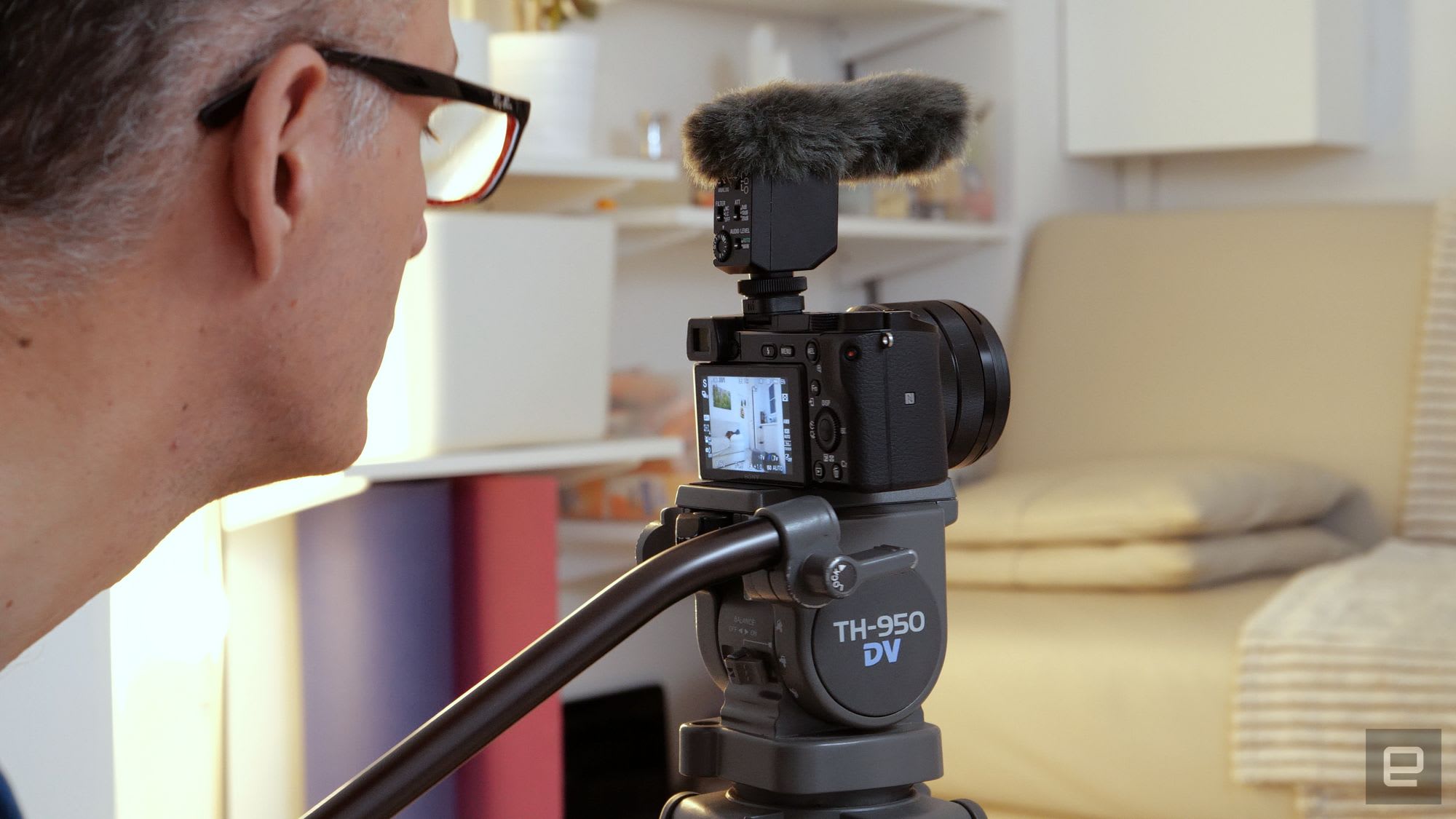 You can shoot with face- and eye-detection autofocus turned on, and it works just as it does with photos to nail focus on human or animal subjects. Sony does this better than rivals, and that feature is important for video beginners, letting them capture sharp family or adventure videos with no hassle at all.

The A6100 has a flip-up screen that's good for vlogging, along with a microphone port. However, attaching a mic to the hot shoe will block the screen, which defeats the purpose. If you want to blog with an external mic, you'll need to get some kind of extension plate that pushes the microphone off to the side. Ironically, that will mean you can't use Sony's own multi-interface shoe microphones.

The main downside to the A6100 for video is the bad rolling shutter. It reduces the camera's usability for vlogging unless you attach a gimbal. This would again be forgivable in $600 camera, except that Sony's competition (the like-priced Fujifilm X-A7) has fewer rolling shutter problems. 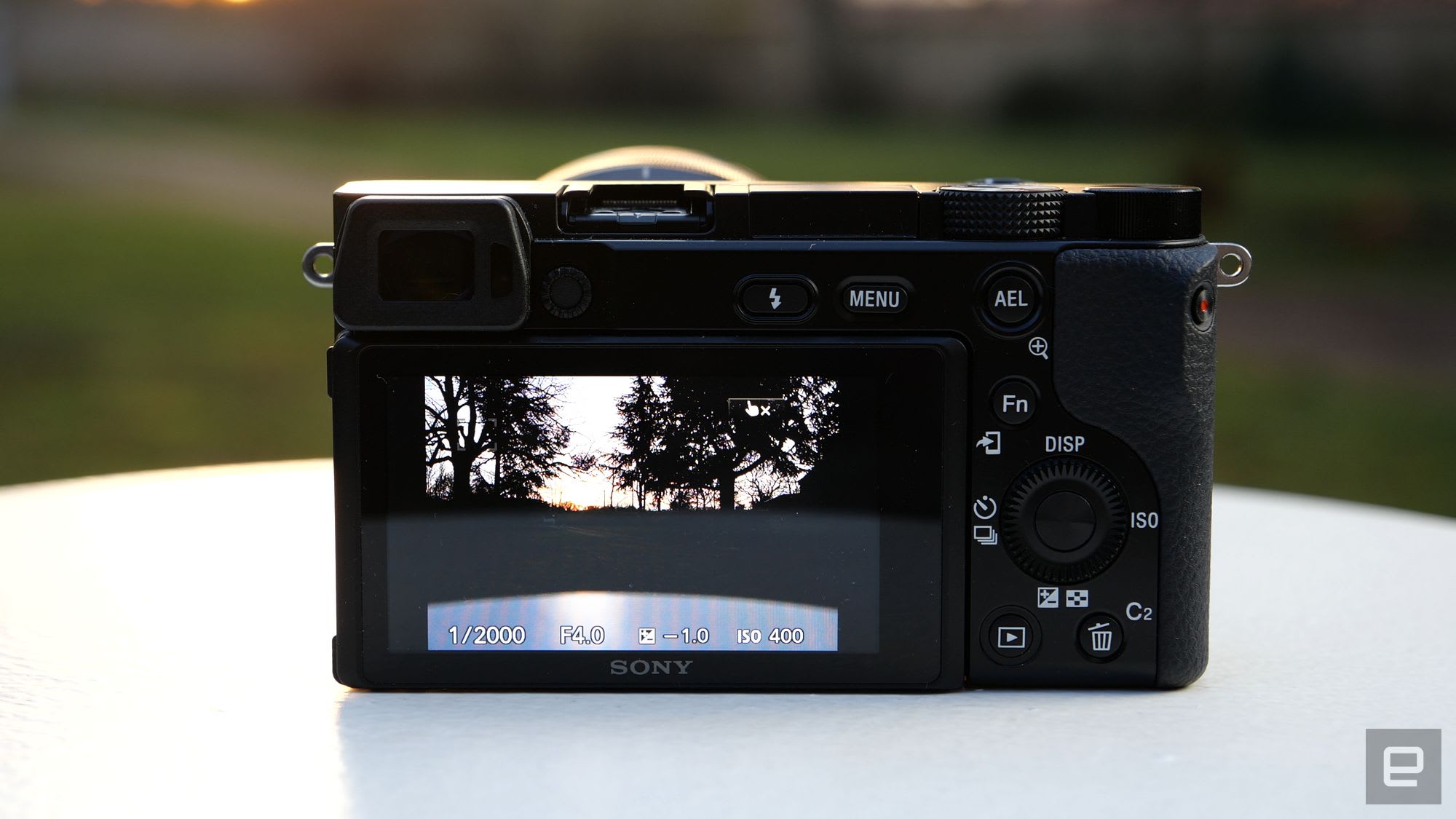 For its APS-C camera series, Sony has stuck with the "don't fix what ain't broke" mantra. I didn't think that was enough for the more expensive A6400 and A6600 cameras, given stiff competition from Fujifilm's X-T30 and X-T3, or Canon's M6 Mark II.

However, unlike those models, the A6100 is a much more significant upgrade from the A6000, especially in terms of video and autofocus. And its rivals in that price range (the Fujifilm X-A7 and Canon M50) are less formidable. That said, if you're willing to spend an extra $50, Fujifilm just introduced the $700 X-T200, a camera that tops the A6100 in video, thanks to a fully articulating display and reduced rolling shutter.

On top of the rolling shutter issue, the A6100 has other weaknesses like a low-res EVF and a poor menu system. However, with pricing now reduced to $650 from the original $750 price tag (and down to $600 at the moment, body only), the A6100 is the best budget APS-C camera you can get right now.

In this article: 4K, A6100, APS-C, Autofocus, Camera, cameras, Eye-detection, gear, Mirrorless, review, sony, video
All products recommended by Engadget are selected by our editorial team, independent of our parent company. Some of our stories include affiliate links. If you buy something through one of these links, we may earn an affiliate commission.