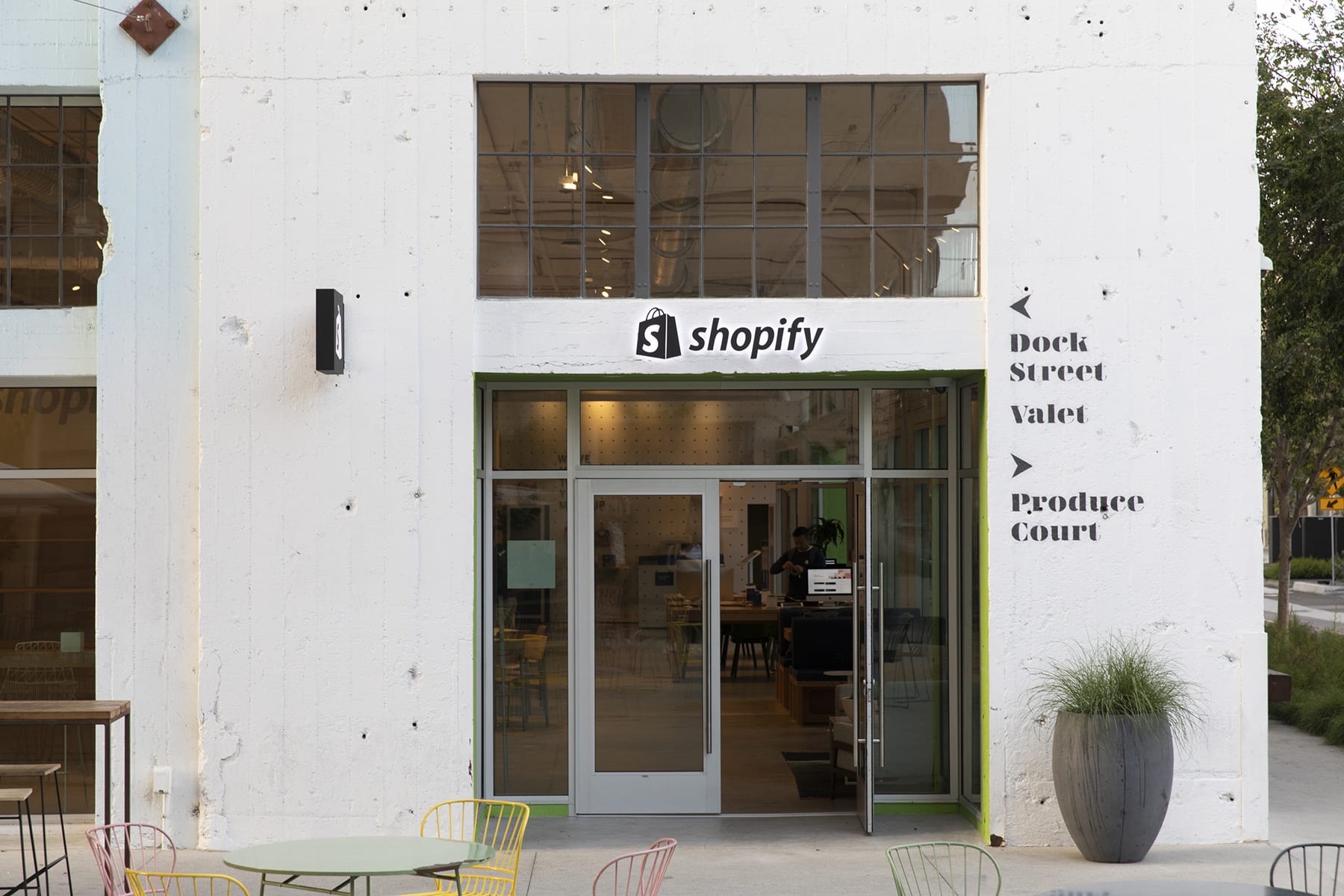 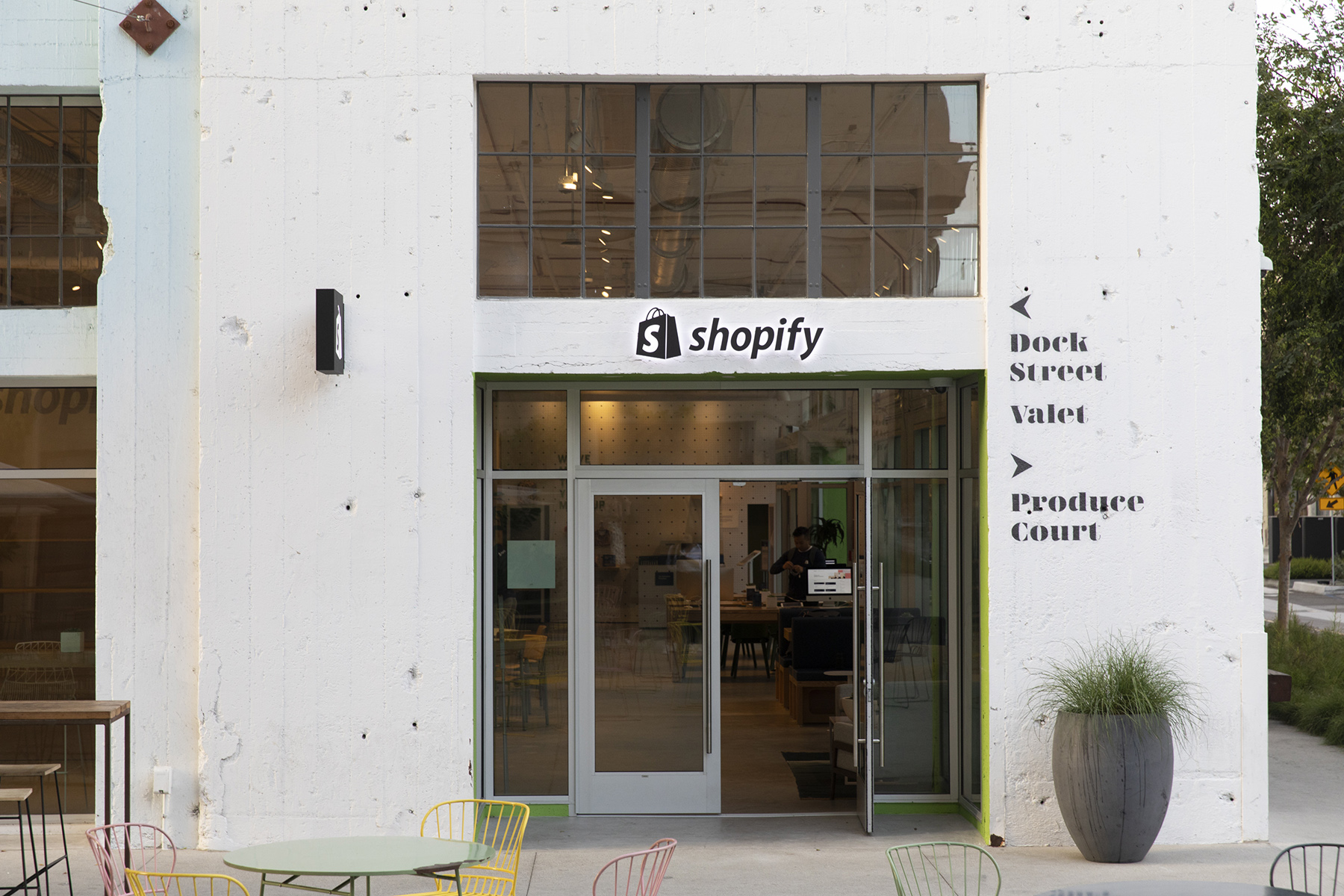 The retailpocalypse started in 2010. It followed the 2008 global recession, with the parallel birth and rise of social media adding fuel to the growth of online shopping. Suburban and rural malls sat empty, underutilized or poorly maintained as the most affected brands lost their customer base in the squeezed middle class. Meanwhile, online retailers thrived without the overhead costs of a physical space.

Nearly a decade later, the online-only platforms that disrupted retail are choosing to pay rent as an additional, unnecessary expense. There are items available for purchase in each space, but the stores' ultimate goal is to offer a tangible experience offline to their users or consumers.

Hunker describes itself as an editorial website to help "first-timers improve their homes -- with inspiring tours, practical solutions and design advice for real people." Shopify is an all-in-one commerce platform where users can start and run an online business, facilitating 820,000 online stores since June 2019. Depop calls itself "the creative community's marketplace" and projects that its existing user base will increase threefold over the next three years, from 5 million to 15 million users.

In the last two years, each company has added a physical space that isn't exactly a store and isn't really an office, though they definitely borrow aspects of each. Hunker's space, known as Hunker House, is a three-story loft in the Abbot-Kinney neighborhood of Venice, CA. Shopify opened a 1,600 square foot location in downtown Los Angeles' The Row, and Depop's two community spots are in Little Italy, Manhattan, and Silver Lake, LA.

"When you are competing online, whether it's with other marketplaces, brands or services or vendors like Shopify, you have to add something that people can't get elsewhere," Vogue Business Editor Hilary Milnes explained. "I don't know if it's totally proven that this really works, but if you are going to experiment, the idea of what makes really loyal customers is that community mindset. Even if it's more of a marketing arm than an actual sales outlet."

She also said that online businesses, with all the user data they possess, have a greater understanding of their customers than pre-online shopping brands that simply opened stores in efforts to reach the largest scale. "It's totally different because of how intentional and strategic these spaces are." 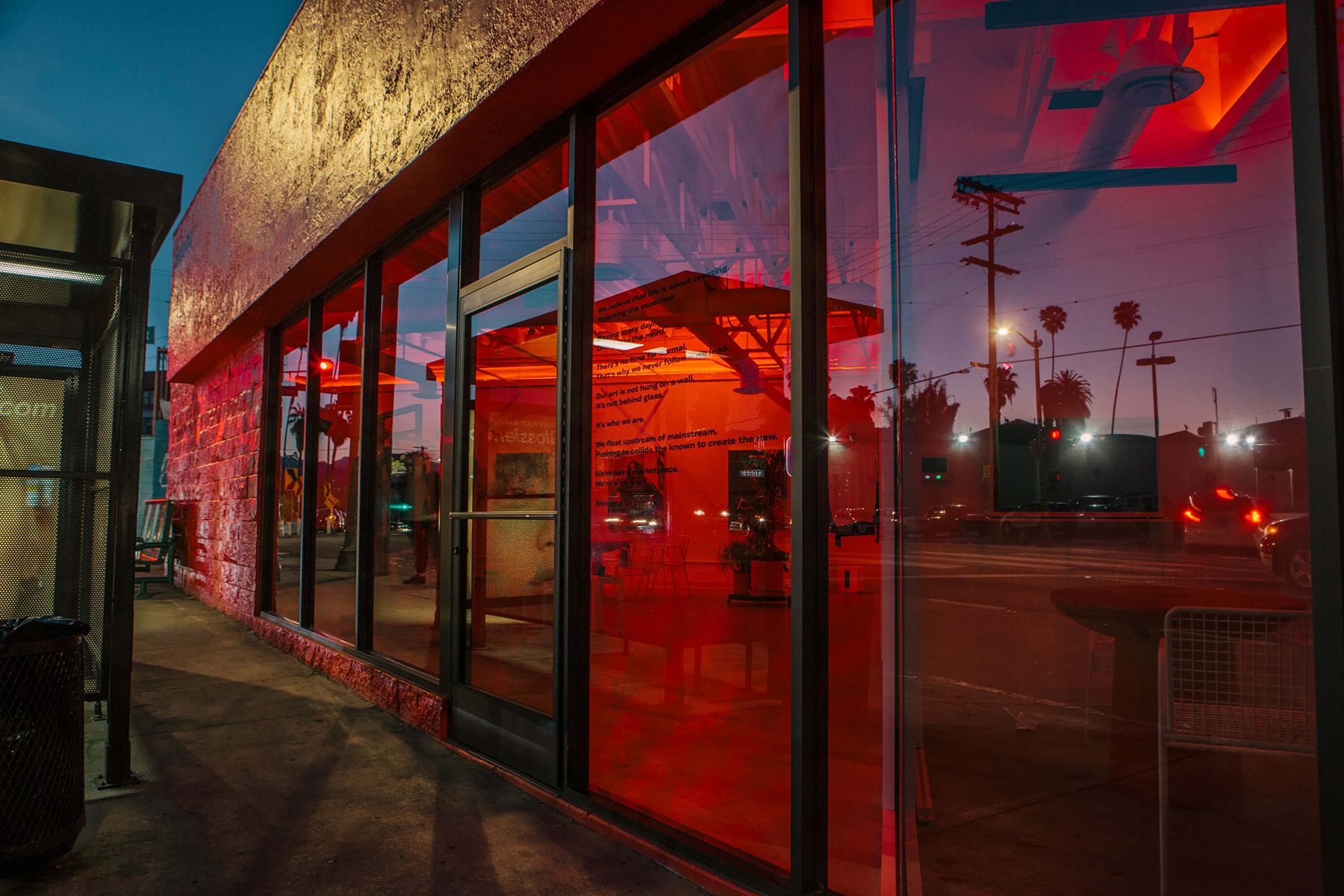 Depop opened two locations in New York and LA in 2018. Users could book a free photo studio to photograph items for their stores or shop featured-users' collections. The brand also used them as event spaces, or to feature collaborations with users. The New York location closed in December 2019, but the west coast one remains open. Depop US Country Manager Sarah Haith says, "Providing our community, regardless of where they are, with a place to experience new fashion culture and creativity in real life is important to us and will remain a focus for Depop going forward."

Shopify's LA outpost is a communal space for Shopify merchants to work and get IRL technical support. It's also where Shopify hosts a full calendar of educational entrepreneurship programs. Hunker House is a showroom, but not in a sense that visitors can buy from the floor. It's flipped quarterly to show design trends and establish their aesthetic, while also acting as a content studio, outlet for partnerships (to feature brands' home wares or host influencers) and an event space.

There are two consistent components among the three spaces -- programming and retail -- but traditional retail is probably the smallest part of the equation.

Traditional retail is probably the smallest part of the equation.

Both Depop and Shopify feature select users' goods in their spaces. Amin Adjmi, owner of Depop shop StayCool, did a pop-up at the New York location. He had a kick-off party with drinks and music and decorated the room in line with his brand's aesthetic to launch and sell his winter 2019 collection. "Depop put people purchasing my clothes through their POS system and fulfilled it. Obviously, they gave me a space to have my product, which was amazing, and were an extra set of hands. I didn't have to be there each day after the event to sell my stuff." They did, however, take ten percent of his sales (as they would for items sold online), and he went on to use the space, attending other pop-ups and using the free photo studio to shoot models in his clothing.

Shopify's space also features merchants' items for sale, but it goes a step further and brings in more established merchants to offer insight to their community through panels, masterclasses and other educational events. The team from The Hundreds, a 16-year-old LA-based streetwear and media company, did a Merchant Mentor Session, bringing in a couple hundred people for a two-and-half-hour event to hear the founders' story, ask questions and meet other like-minded merchants looking for perspective.

"The IRL extension of Shopify allows us to connect with our customers face-to-face, to share the realities of starting a brand while learning on a personal level how our brand has impacted them," the brand's digital director Ceilidh MacLeod, who spoke at the event, said. "Additionally, it gives us an opportunity to connect with people who don't even know our brand. We had people far removed from our typical customer demographic come out purely for the business advice."

Hunker's programming is similar but operates on a much smaller scale for now. "I'd say community and communion are big parts of the way I think about building the Hunker brand, and the way our team thinks about our relationship to our audience," VP of Content Eve Epstein says. "Being able to host these conversations is so important, both literally, like our Black History Month panel where we're speaking to some of the most amazing and creative people in the design community about the challenges that they've encountered in the course of their amazing careers, or [in a] slightly more abstract, but still equally important way, through creating content that really represents a conversation between two brands." 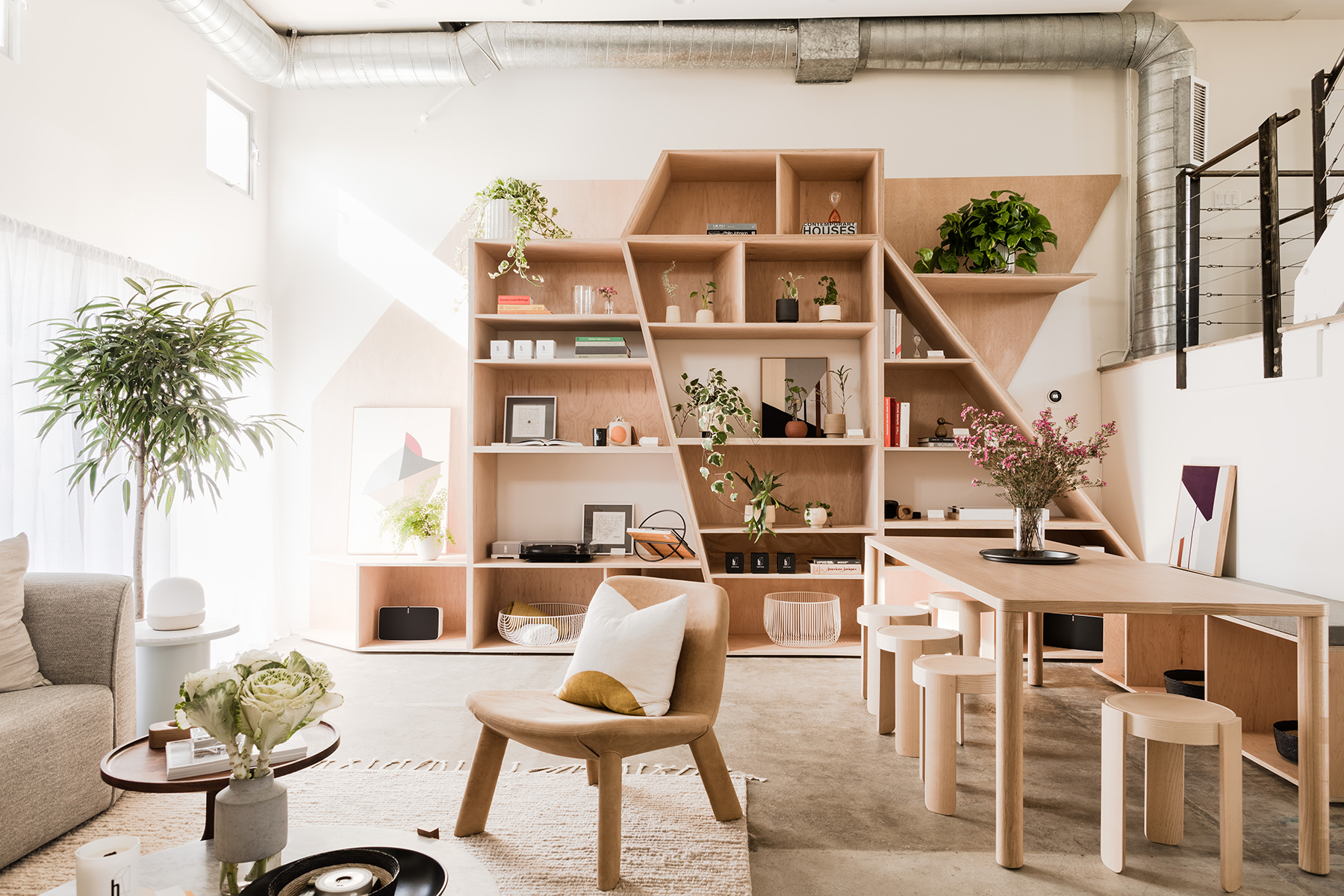 While Shopify and Depop's spaces are more for their users, Hunker's House is highly leveraged for content creation, in an effort to make Hunker a more attractive partner to their advertisers. "Every partner and activation is really different, with different people, needs and goals." This has shed light on how versatile the house has become when working with a wide variety of partners. "You're not just publishing all of the same kind of content on one channel. You are really creating stuff based on what works well. I've noticed that the house is a really natural extension of a lot of those properties."

Much like social media, which is best leveraged for branding, this new era of brick and mortars are part of a larger integrated strategy rather than a clear-cut sales contribution to the bottom line.

Hunker is tied into a five-year lease on the prime real estate in Venice, and Shopify is expanding. Depop says its New York location is only closed to the public, not its community, and its LA location continues to grow. But none of them are responsible for generating sales revenue. While it's unclear whether this new physical retail model will work right now, these community spaces only really have one thing in common with the shops that are consistently dying off around them⁠ -- the square footage.

In this article: business, home, internet, longread, services, tomorrow
All products recommended by Engadget are selected by our editorial team, independent of our parent company. Some of our stories include affiliate links. If you buy something through one of these links, we may earn an affiliate commission.