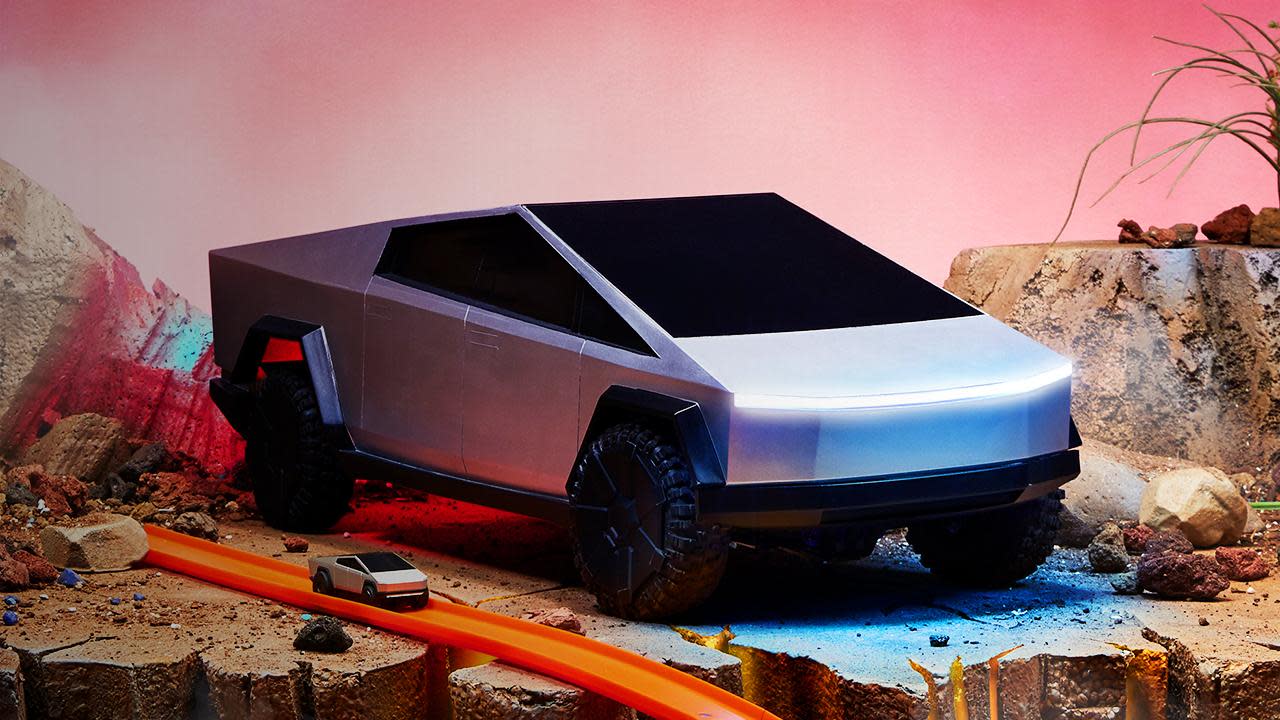 If you're feeling pretty hype about the Tesla Cybertruck but don't have $39,900 to spend on one, maybe Hot Wheels' newest RC vehicle is more your thing. Sure, it's only 1/10 the size and made out of plastic, but here it only takes $400 to live out your Tesla dreams. 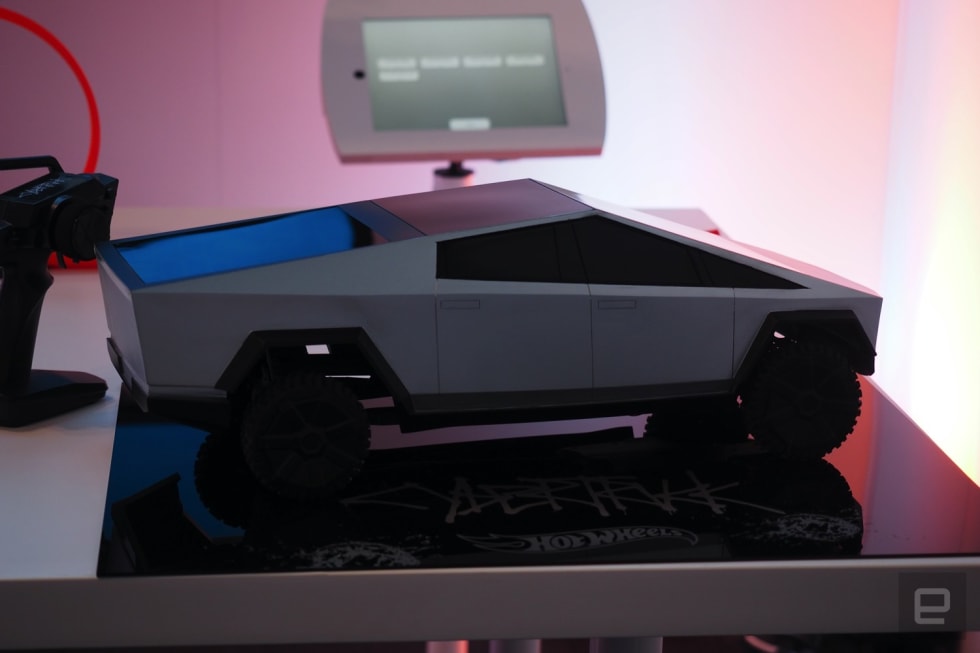 The Hot Wheels Cybertruck R/C has all the details you would expect for a toy that costs a few hundred dollars, including rows of front and rear lights and the distinctive rear cover with a telescoping tailgate. Sadly, unlike the original, it's not automatically activated — you'll have to pull it out by hand. There's also no RC Cyberquad ATV to tuck neatly into the truck bed. (Mattel is thinking about introducing one down the line, but nothing's set in stone yet.)

It's obviously too small to ride in but the inside will be fully designed with seats and a dashboard; the shell is removable so you can take a look inside (or pose your favorite action figures in the chairs). This is definitely designed for the Tesla fan, but even regular RC fans will find plenty to like about the Cybertruck. It's capable of actual speeds up to 25 miles per hour which doesn't make it the fastest RC out there but is still is nothing to sniff at. (That's actually the speed limit in New York City, meaning that if you were crazy enough to take this thing out on the street, it wouldn't hold up traffic by being too slow. But you probably shouldn't.) 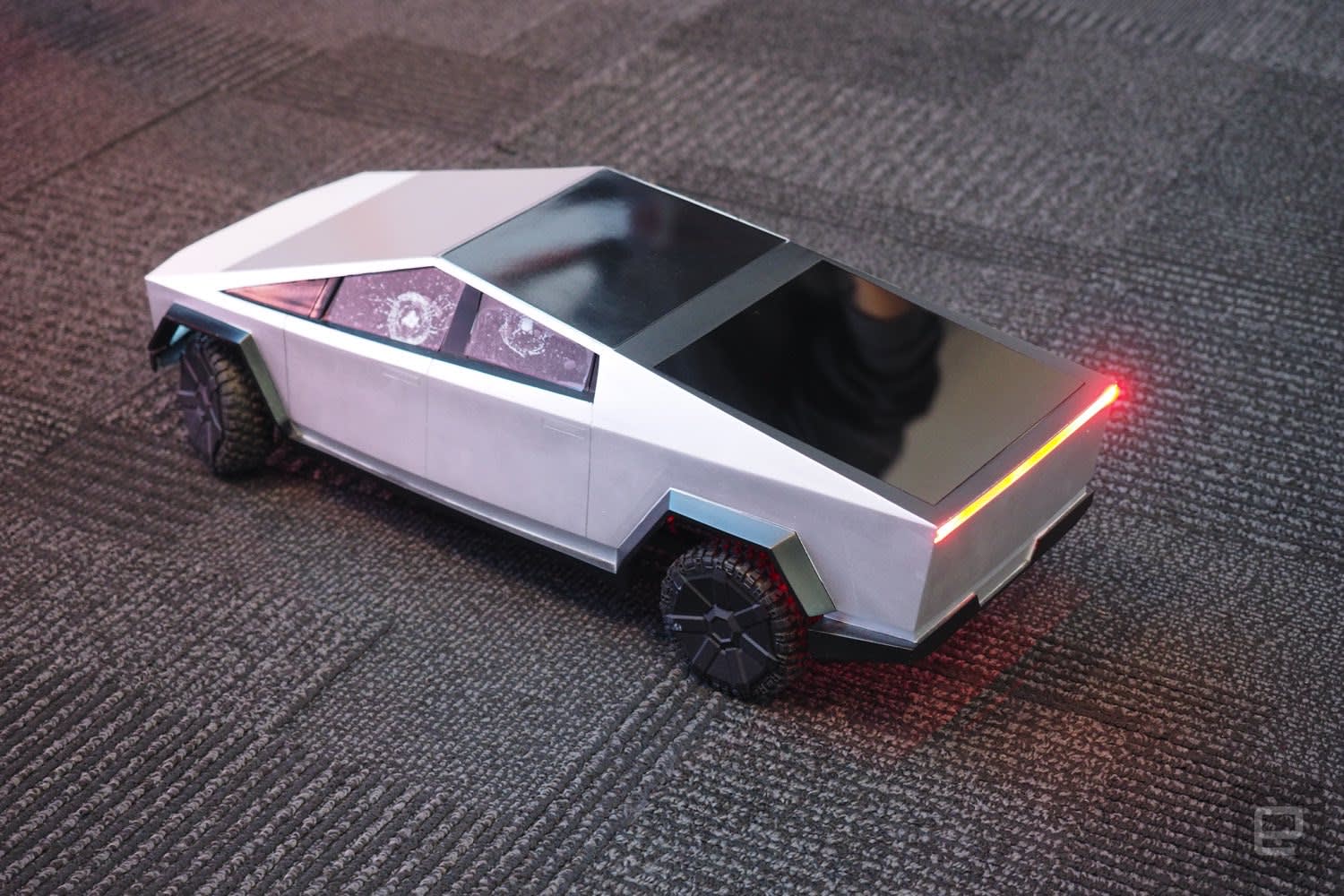 The Cybertruck uses hobby grade parts and a standard dial-based RC controller, so in addition to going fast it also turns on a dime. In a demonstration at Toy Fair we watched it gracefully navigate under a table and around the legs of passersby. There were moments I was sure it would crash and it didn't.

If it did have a collision, though, the plastic construction seems to mimic its full-sized metal counterpart well, though I still wouldn't throw heavy objects at it. Oh, if you're fond of that botched demonstration from the reveal back in November, Hot Wheels has packed in a little treat for you there too — the Cybertruck comes with "shattered window" decals so you can emulate the look of Tesla's little mishap on stage. 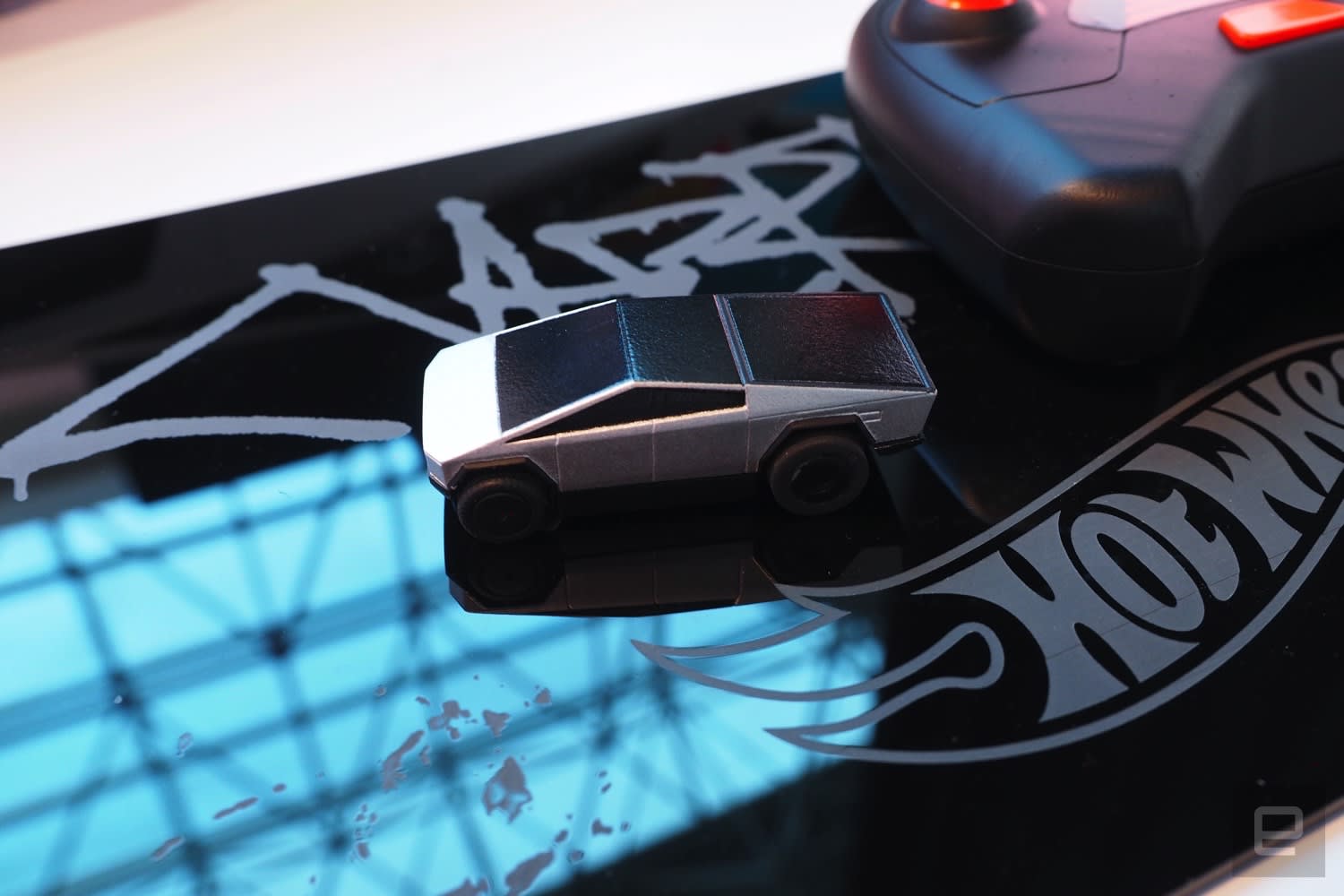 If $400 is still a little rich for your blood, don't worry, there's a 1/64 scale RC model too and it's only $20. It doesn't have all the bells and whistles of its larger sibling like the removable cover, and it uses a gamepad-like controller instead, but it's still very fast (7 miles per hour, which scales up to 500 mph) and maneuverable — this one could stop close to the edge of a table without rolling off. And, since it's the same scale as the majority of Hot Wheels' vehicle line, it can be used on the standard orange track, so you can speed your car through loop-de-loops that owners of the real Cybertruck will only be able to dream about.We don't have a release date for either toy at this point but they are available for pre-order today on MattelCreations.com, with the release set for later this year. Follow all the latest news from Toy Fair 2020 here!

In this article: cybertruck, gadgetry, gadgets, gear, hot wheels, mattel, rc, tesla, toy, toy fair, toy fair 2020, toyfair2020, toys, transportation, video
All products recommended by Engadget are selected by our editorial team, independent of our parent company. Some of our stories include affiliate links. If you buy something through one of these links, we may earn an affiliate commission.