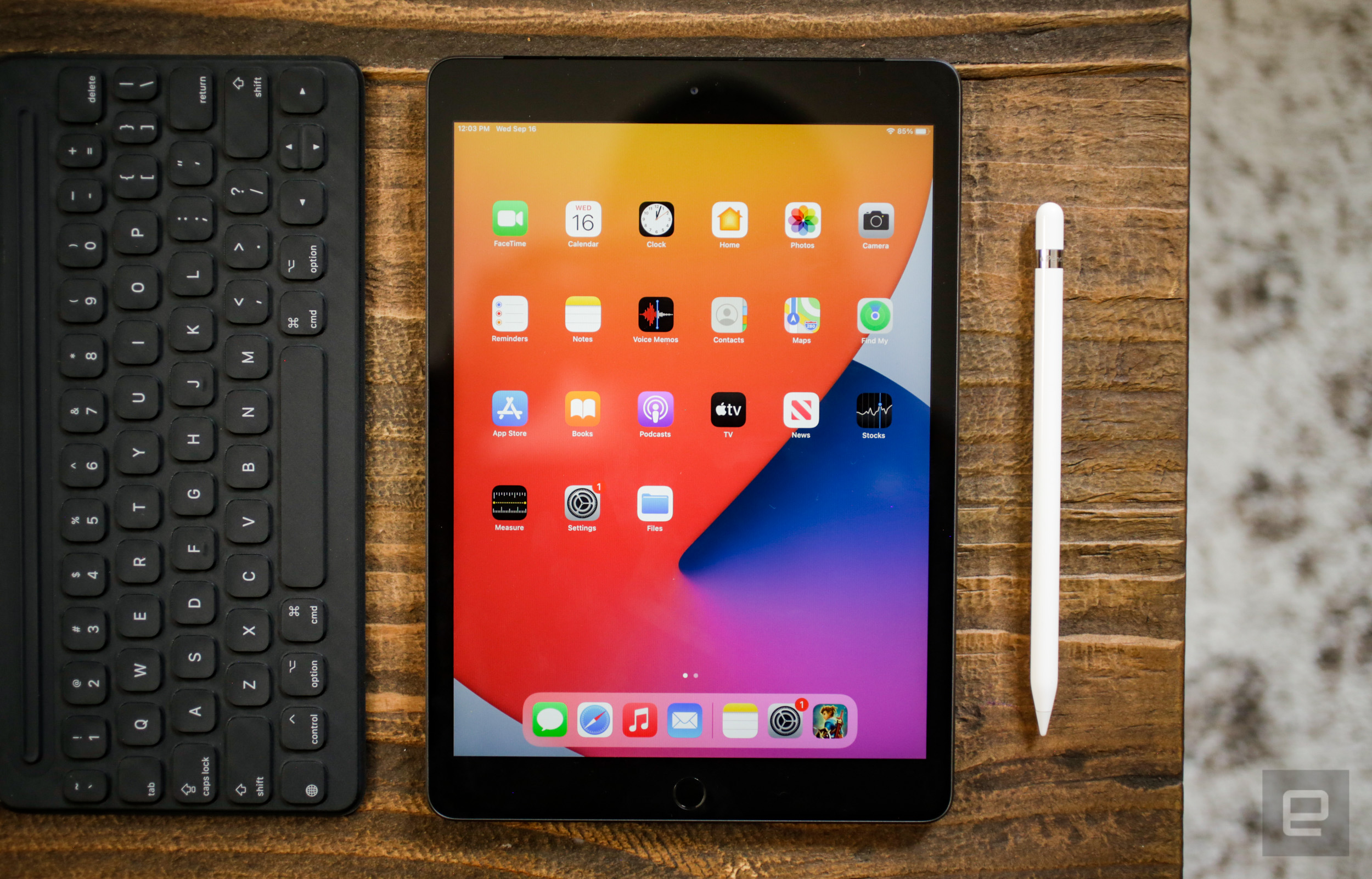 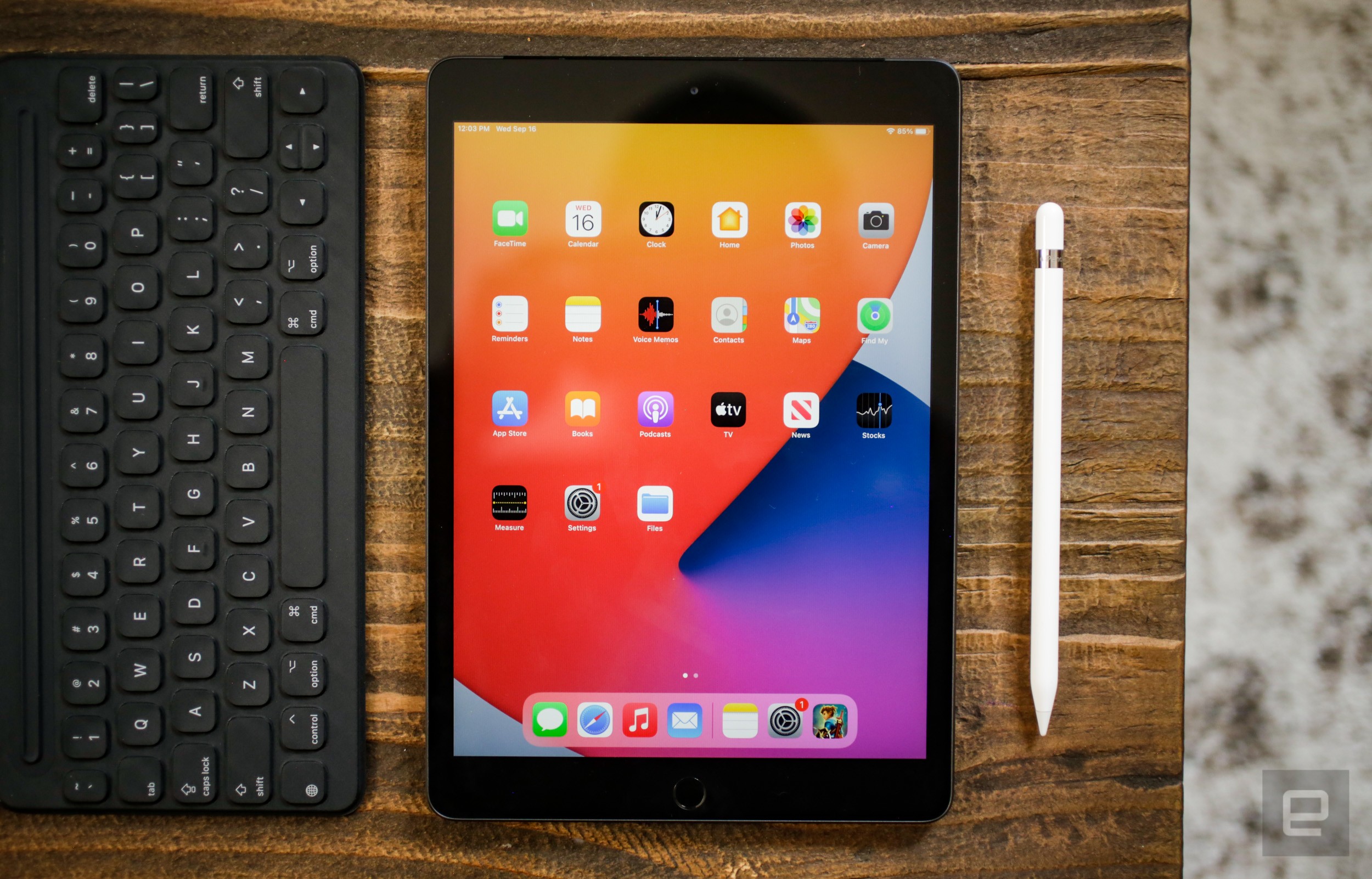 If there's one iPad people probably want to see right now, it's the new, Pro-inspired iPad Air. Sorry -- that one just isn't ready yet. I have, however, spent the last day with Apple's new, 8th-generation iPad. With its classic iPad looks and its lack of substantially new features, it's just about as unexciting a tablet update as you could hope for. What the 2020 iPad lacks in thrills, though, it makes up for with extra power.

If you want to know more about the design Apple ran with for this iPad, I strongly suggest you check out our review for the 2019 model since it goes into those changes in more detail. It’s all pretty easy to sum up, though: The iPad now packs a 10.2-inch display that's noticeably bigger than what Apple used to offer in its lowest-end models, and it plays nice with the first-generation Apple Pencil. And like some of its more expensive siblings, the 2020 iPad also has a side-mounted Smart Connector, so you can magnetically attach accessories like keyboards and screen covers.

Put another way, Apple finally took some of the features that were once exclusive to its Pro-level tablets and made them available on the cheap. That added value is hard to argue with, but it's not exactly new, and it's worth noting that tricking this iPad out with first-party accessories gets expensive fast. The first-generation Apple Pencil and the company’s Smart Keyboard together cost $260 -- for $70 more, you could buy another iPad entirely. (Thankfully, Logitech has some cheaper alternatives, but that’s new nothing new either.) 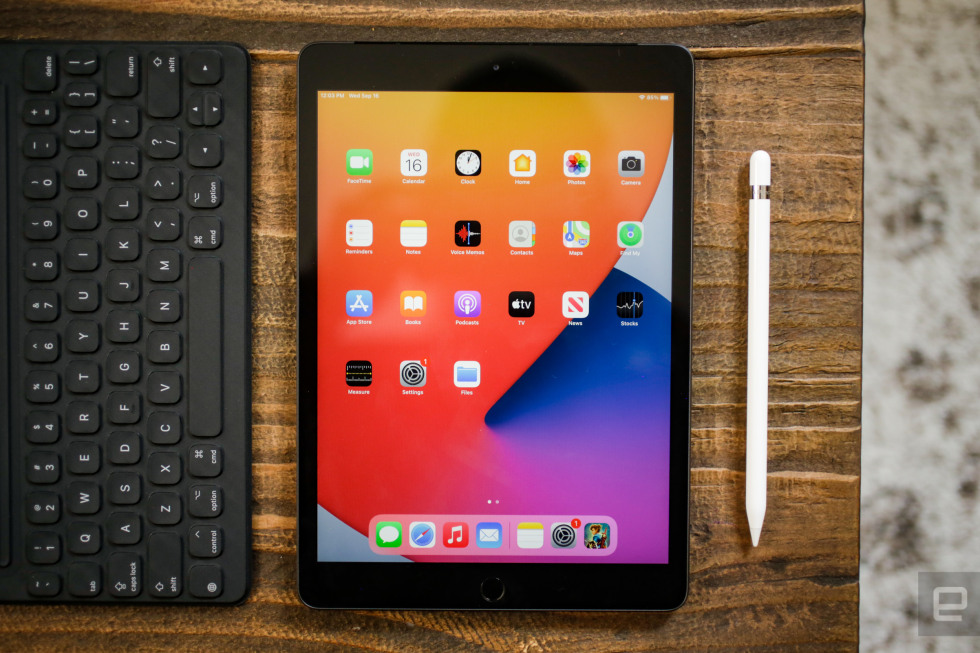 So, what is new here? Well, it mostly boils down to one thing: The A12 Bionic chipset, which we first saw in the iPhone XR, XS, and XS Max. Yes, those chips are now two years old, but they're enough to give the cheapest iPad noticeably smoother performance. Multitasking on the 2019 model could feel a little choppy at times, but I haven't noticed any of that yet, even when running two apps side by side with a third in a floating window.

I've also tried a handful of games over the past day, including Redout and Oceanhorn 2 -- two titles that gave last year's model some trouble. Thankfully, none of the little hiccups I ran into with that earlier model have shown up here yet, but that’s not to say they won’t. The A12 packs a redesigned GPU alongside more raw compute power than the A10 Fusion found in last year's iPad, so it’s no surprise that this iPad runs with less fuss. (Remember: The A10 was first used in the iPhone 7, all the way back in 2016.)

Apple's choice of chipset also means its cheapest iPad finally gets a Neural Engine, which should give this iPad a boost when it comes to tasks that rely on machine learning. With all that said, though, this year’s cheap iPad has the same relatively skimpy 3GB of RAM as last year’s model did, so we’ll have to see how performance really shakes out in our full review. For now, at least, I really don't have much to complain about.

If nothing else, all of this makes the new iPad a surprisingly solid canvas for the new iPadOS 14 update, which recently went live for all Apple tablets newer than the iPad Air 2.

You want widgets? You got widgets. (Just note that they're only visible when you hold the iPad horizontally). The search experience is also somewhat more streamlined so you're not inundated with a long list of results, and in an apparent nod to its desktop cousin, it basically looks like Spotlight Search on a Mac. The design has been cleaned up and revamped a few other ways, too: Phone calls and Siri requests don't take up nearly as much space on the screen as they used to, and apps like Notes and Apple Music have been redesigned to make better use of an iPad's screen real estate.

What might be most notable for the iPad are the changes Apple made to the Pencil experience. Like I noted in our iPadOS 14 preview, a new feature called Scribble lets you physically write in any text field with impressive accuracy. If you spend a lot of your time in Notes, you'll notice that the app now converts your roughly drawn shapes into more geometrically accurate ones, and that you can copy your handwriting and paste it as pure text. We'll dig into the in and outs of iPadOS 14 in our review, but know that there's plenty to like here.

With all that said, there were a few things I had hoped to see this year that just haven't materialized. For one, the entry-level iPad still only has 32GB of storage, which is maybe fine if you never plan to save any files or photos, but less than great for everyone else. To save money, the iPad's display isn't laminated, so you'll notice a sort of hollow thunk when you prod at the screen with your finger or an Apple Pencil. A USB-C port would've been nice too, though I get why Apple didn't do it here -- asking cost-conscious consumers to shell out for new accessories kind of takes the value out of a cheap iPad. It's worth noting though that you get a 20W charger in the box this time, which will refuel the iPad faster way faster than the 10W charger we used to get.

After about a day's use, it's clear this year's iPad falls into the same category the last one did: It's a great entry point for people who don't have a tablet or people who haven't upgraded their iPad in years. It's also a potentially solid choice for students who are learning at a distance this year -- the A10 was already a decent chip, but I have a strong hunch the A12 could run circles around the pokey Celeron processors you see in Chromebooks that cost about the same. All told, we're off to a solid -- if not exactly thrilling -- start with the 2020 iPad, but stay tuned for our full, final verdict soon.

In this article: iPad 2020, tablets, iPadOS, preview, tablet, iPadOS 14, iPad, apple, hands-on, 2020 iPad, news, gear
All products recommended by Engadget are selected by our editorial team, independent of our parent company. Some of our stories include affiliate links. If you buy something through one of these links, we may earn an affiliate commission.