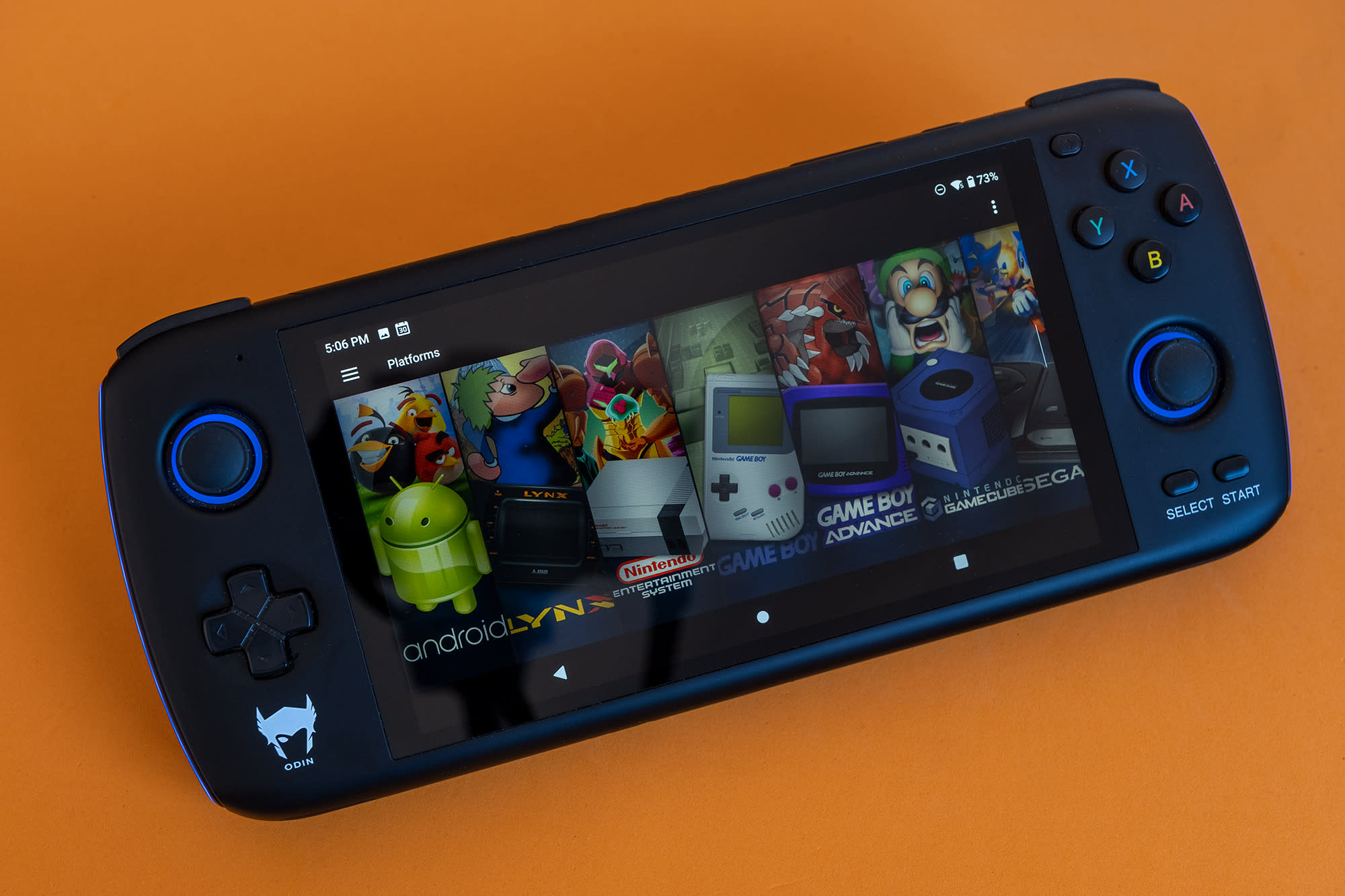 Ayn's Odin is the retro gaming handheld to beat

There are many, many ways to play retro games today. Plenty of those options are handhelds. But you might be surprised at how many of these devices feel jury rigged, cheap or often both. Worse, there’s a mishmash of open-source emulators running on a variety of operating systems to deal with, and all of the hardware is different — in short, emulation is a bit of a wild west sometimes.

What’s more, even the better handhelds usually only emulate up to around the PS1/N64 era. If you’re a fan of the GameCube or PS2 libraries, for example, the venn diagram of handhelds powerful enough that are well made and reasonably priced is effectively three separate circles. Maybe not for much longer thanks to the Odin by Ayn.

Yep, I hadn’t heard of ‘em either, but in the retro gaming scene that’s not uncommon. The Odin was launched on Indiegogo and instantly drew a lot of attention. The premise is simple, to bring the aforementioned venn diagram together and make a more cohesive retro (and even modern game) handheld.

The Odin gets off to a good start by effectively mimicking the Switch Lite form factor. Though the Odin’s screen is a shade larger (5.9 inches compared to Nintendo’s 5.5) and, at FHD, higher resolution. Anecdotally, most people who’ve held both find the Odin more comfortable and even prefer the latter’s analog sticks and D-pad which is not bad for a company new to the space.

I’m personally a fan of how all the controls are laid out. The analogue sticks are far enough away to not interfere with the buttons/D-pad but close enough to allow for quick, comfortable switching between them. I also like that the sticks are a little shallower than on other controllers which means you don’t need to push as far to get the movement you need.

There are three different models of Odin available: Pro, Base and Lite. The Pro is the one we have been using and is, as the name suggests, the higher specification version. We’re not talking bleeding edge internals here, but with a Snapdragon 845 and an Adreno 635 doing the processing and graphics we’re looking at something similar to a high-end smartphone from a couple of years ago. Bear in mind that the Switch using an older chipset: It’s, as the saying goes, what you do with it that counts, right?

The differences between each model include battery size, SoC, storage, RAM and, of course, price. Here’s a cheat sheet for those interested:

It’s worth noting that if you’re only worried about the storage, all Odin’s come with a microSD card slot so you can expand the available memory that way if you prefer. As for battery capacity, the 6,000 mAh model I tested was good for around six hours of play on systems like the PS2/GameCube and, given everyone seems to test this game, about half that time with something like Genshin Impact.

This puts the Odin in an interesting spot. You can certainly pick up a very good retro handheld/emulator for around $100, but likely it won’t be able to play nearly as many games from as many platforms. Alternatively, you could spend over $1,000 on something like the Aya Neo which likely trounces the Odin but then is also four times the cost. Then there’s the Steam Deck which is a whole other beast, but a viable alternative if you want to play non-retro games also. It’s also a shade pricier than the Odin, starting at $400, but obviously not a direct competitor. All to say, the handheld market is kind of all over the place.

The Odin runs on Android. If that induces an internal groan, we get it. Android and gaming have a complicated history. But arguably Android makes the most sense for a device like the Odin. Not least because the hardware is comparable to that in a high end phone, but Android is also well catered for in the retro world, with most of the emulators having mature ports. Oh, and Android does have good games of its own, so you can play those natively too.

As much as the Odin is aiming to feel like a complete console rather than a single-board PC in a box running apps, there’s a bit of a problem. It’s almost impossible to do it any other way without going full remake a-la Analogue. That said, setting up the Odin was about as painless as this process gets. Pick the emulators you want, install them, load up on games and you’re more or less good to go. Often the physical controls are either already mapped or just take a minute to do so.

Ayn did give the Odin its own launcher which sorta-kinda makes it feel more “consoley” and less like an Android tablet, but honestly the version it ships with is clean enough that you can just stick with that or use one of the popular frontend apps like Launchbox (pictured in this article) or Dig. Thankfully there’s almost no extra app cruft on the Odin out of the box and, despite being Android 10, there’s support for Project Treble which should help keep it feeling current for longer.

If your interest is mostly around the NES/SNES or Sega equivalents, you can simply install RetroArch and kick back. There’s nothing unusual here for those most favored or classical consoles so I’ll focus on the more advanced systems.

For many it’s the promise of portable PlayStation 2 and GameCube emulation that will be a lure here. The PS2 is notoriously tricky thanks to the console’s custom processor. But the emulation community is industrious if nothing else and there are some pretty good options now. I tested out some of my favorites from my physical collection, but obviously had to start with Rez, just to see how it looked on that display.

Sure enough, it looked pretty fab. My left thumb is way less nimble than it was 20 years ago but the Odin barely flinched at serving up the game. I may have heard a few minor, almost imperceptible glitches in the audio, but they were infrequent and possibly something that could be remedied in the emulator settings rather than the hardware.

This experience was pretty much the same with any other title I tried. I spent time taking Raiden out for a crawl in the rain in Metal Gear Solid 2. While over in GTA: San Andreas, CJ’s hopes of going straight were just as futile (complete with slightly wonky physics) as I remembered. Final Fantasy XII’s dramatic opening sequence ran as smooth as it ever did and Reks’ brave naivety was almost glitchless bar some light cracking on audio here and there.

With the GameCube you might reasonably expect a little more success given that historically it’s been easier to emulate. That does broadly seem to pan out. It might take a little fiddling around to get things optimized, but F-Zero GX can run at full speed and there are only a few games that are more performance hungry than that. You can also get some good results for Wii emulation here too but that will depend on a title’s use of Wiimotes among other things.

Of course, everything at this level is still some sort of crapshoot. Who knows how the game was programmed or how it used the hardware it was built for. There are already several videos on YouTube that dutifully go through a bunch of titles for all the systems to show how they run. There’s also a thriving subreddit that has spreadsheets dedicated to listing which games are (or aren’t) compatible and how well they perform on the Odin.

There are two areas where you don’t need to worry about compatibility: Android gaming and streaming services like Stadia and Game Pass. There’s not a lot to say here really other than the Odin was born to do it, so long as your internet can keep up. (WiFi performance is comparable to my phone, for what it’s worth.)

Some brave folks out there have even tried running 3DS and even Switch games all with varying degrees of success. Ultimately what you’re buying with the Odin is a bespoke gaming handheld that merely has the capability to run these apps, there’s no real promise of performance (or really control thereof).

But it does seem to have been particularly well designed. The active cooling seems to be a bit of a secret sauce, making sure you not only get the most out of the processor but for extended periods without any fear of damage. Some might wonder, why not simply get an old handset with similar specification and slap it in something like Razer’s Kishi. You definitely could do that, but the Odin’s cooling isn’t the only perk, its screen is bigger and 16:9 rather than superwide like a phone. Plus… it’s about not feeling like you have a phone in a clamp, that’s kinda the point.

It’s not a headline feature, but Ayn did see fit to offer two ways of playing the Odin on a TV/display. There’s a micro HDMI port on the top which is probably the simplest way to get your game on a bigger screen. I will say though that I didn’t have a great time with it as neither of my TVs have a great gaming mode, so latency was an issue. There is also DisplayPort connectivity via the USB-C connection.

If you really want to consolize the Odin, you can do so via a $50 “Super Dock” accessory. With this, you can slide the Odin into the mount much like a Switch and pick up where you left off on the bigger screen. Along with USB, there are also dedicated ports for both GameCube and N64 controllers should you have any of those lying around. It also adds in the option for ethernet and USB-C/SATA for things like SSDs (more modern games take up a lot more space after all).

Of course, given it’s running Android, you can do anything with the Odin that you can do with a phone or tablet. That means video streaming or music listening and even productivity. Though, logic might suggest that running things in the background or, heaven forbid, allowing notifications is only going to do bad things to your gaming experience. But you could.