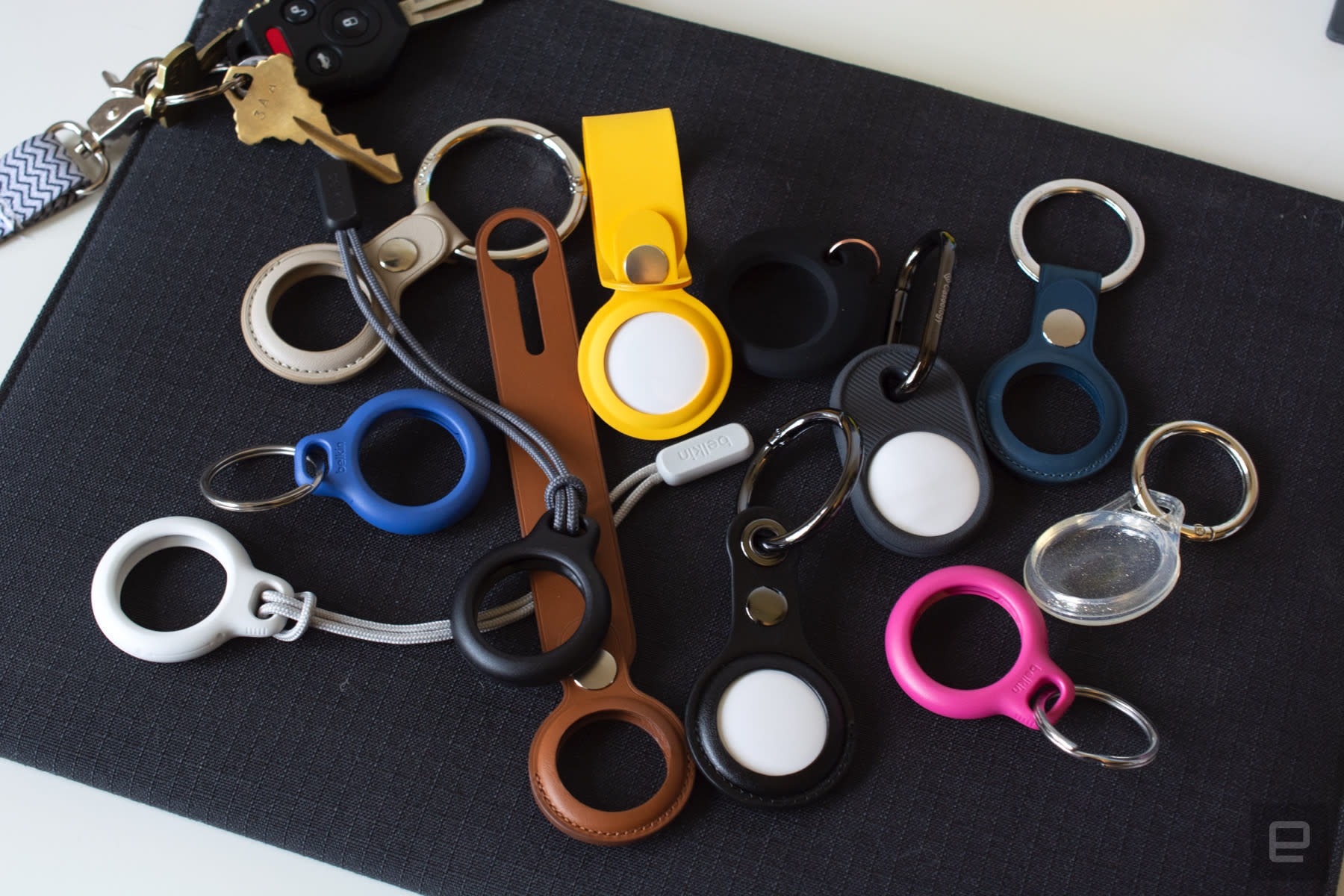 The best Apple AirTag accessories you can buy

Our favorite cases and holders to protect your tracker.

V. Palladino
@valentinalucia
August 22, 2022 9:15 AM
In this article: thebuyersguide, apple, airtags, spigen, gear, elago, evergreen, best tech, feature, incase, tile, caseology, commerce, streamshopping, belkin
All products recommended by Engadget are selected by our editorial team, independent of our parent company. Some of our stories include affiliate links. If you buy something through one of these links, we may earn an affiliate commission. All prices are correct at the time of publishing.

Apple lovers who constantly lose their keys got a new way to keep track of them with the launch of AirTags. But despite how easy they are to set up, Apple’s tiny Bluetooth trackers have one critical flaw: no built-in keychain hole. That means anyone who buys AirTags will have to buy holders or cases to attach them to their stuff.

Despite how backwards this seems, it’s a very Apple move since many will simply buy the company’s own AirTag holders to make things easy for themselves. But those aren’t the only options available as plenty of accessory companies have hopped on the AirTag train with their own cases, holders, straps and more. If you already bought an AirTag or two, you probably know where you want to put it – and that placement will dictate the type of case you should get for it. These are some of our favorite AirTag cases that will work for a variety of items.

Spigen’s Valentinus AirTag cover is one of the best alternatives I’ve found to Apple’s own leather key rings. It has a very similar design to the first-party accessory (albeit made with pleather) , but it comes in much cheaper at only $8. Your AirTag nestles into the perfectly-shaped leather circle and snaps shut, and since the leather extends slightly over both sides of the tracker, there’s very little chance it will pop out unexpectedly. I also appreciate that it comes with a carabiner-style key ring, which makes it easier to secure to your belongings.

Orbitkey’s Leather Holder for AirTag is a more elegant version of Apple’s accessory. It’s a genuine leather sleeve that opens just wide enough for you to slide your AirTag into its pocket. Attached to it is a quick-release ring that takes some getting used to, but once you know how to open it up, it’s easy to secure onto your keys. You essentially just have to push in one direction on the holder’s ring to unlock it, which then allows you to secure the AirTag to a lanyard, your car keys and the like. It’s a good option if you prefer that your accessories have a more polished look.

Caseology’s Vault has a more utilitarian design, made with tough, textured TPU. The oval-shaped holder has an opening on one side into which you pop your AirTag. The other side has a smaller opening that attaches to the included carabiner, which is one of the best clips I came across in my testing. It’s pretty basic as far as carabiners go, but it’s better than a standard key ring — especially if you want to easily attach your AirTag to something other than your keys like straps on a backpack, or even a pet collar. Overall, the Caseology Vault is one of the most attractive holders I tested and it will be a solid choice for anyone who doesn’t need leather.

Incase's Woolenex AirTag holder is one that is just as attractive as it is durable. The company's Woolenex fabric is made of a woven blend of polyester fibers that make the accessory lightweight, water repellant and fade- and tear-resistant. Incase makes a bunch of accessories out of this material, and those who like premium fabrics that can also handle a bit of wear-and-tear will gravitate to it. The holder has a TPU snap closure and circular cutout so it won't interrupt the AirTag's signal — plus, it lets you see any cute engraving you may have on your tracker.

AirTags can also help you keep track of larger bags and luggage, and you could easily slip one into an interior pocket and call it a day. But if you’d rather hook the tracker to the outside, you’ll need something a bit larger and more flexible than a standard key ring. Belkin’s Secure Holder with Strap is a good option, and it’s budget friendly at only $13. The case opens up into two pieces, allowing you to sit the AirTag inside the circle and twist and snap the two halves together to lock it in. You can then attach the AirTag to your luggage handle, water bottle or other item with the strap, which feels quite strong.

I appreciate the unique design of Belkin’s Secure Holder, although it was hard to twist open when the AirTag was inside of it. But that’s a good thing for daily use; your AirTag isn’t going anywhere when in the Secure Holder. I also liked its slightly raised edges, which provide extra protection against impacts and bumps.

Whether you’re attaching an AirTag to your house keys or clipping one to your kid’s backpack, you don’t need to settle for a boring holder. There are a number of fun AirTag cases available now and some of our favorites come from Elago. The accessory company makes a bunch of minimalist AirTag holders – which are good options if you’re looking for something simple and cheap – but it also has cases in the shapes of avocados, ice cream bars, floppy disks and even retro game controllers. The best part is that, unlike other brands that can quickly raise prices when you want a fancily-shaped case or a holder with your favorite character on it, Elago’s playful cases will run you no more than $15 apiece.

Keyrings and straps aren’t the best way to attach an AirTag to anything and everything. Things like bikes, coolers, luggage and other items would be better served by an adhesive mount. Pelican makes one of the most protective ones available at the moment – the Protector Sticker Mount case has a two-piece design that you pop open to insert your AirTag inside. It basically acts as a little box in which your AirTag lives while it’s tracking your stuff. You can stick it to your items using the strong adhesive panel on the back of the case, and Pelican even includes an extra adhesive pad in the package as well, just in case you need another one. While the case itself is a bit tough to get open at first, that just shows how hard it would be for your AirTag to accidentally pop out of it.

Similar to Pelican’s Protector, Moment’s Stretch Fabric Mount for AirTag sticks to surfaces – in this case, any fabric – and keeps your tracker enveloped in its double-hemmed, powermesh design. It’s a good alternative if you don’t want your AirTag sliding around inside the interior pocket of your backpack, or worse, the less-secure pockets of your coat. And since Moment’s wrap is quite thin, it blends into the lining of bags, jackets and other things better than bulkier options.