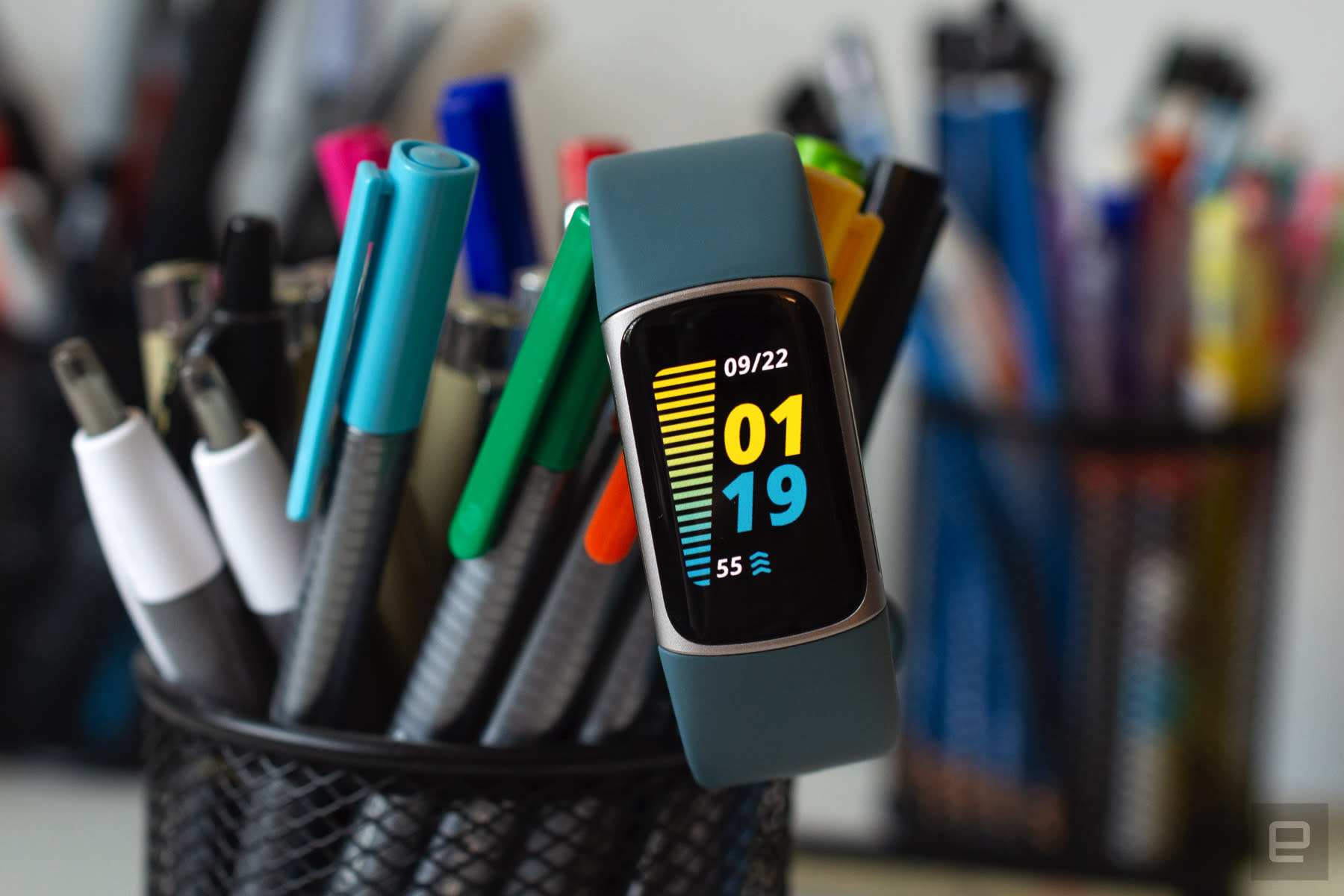 Smartwatches aren't your only options.

V. Palladino
@valentinalucia
October 14th, 2021
In this article: thebuyersguide, gear, Garmin, evergreen, Withings, shopping, commerce, streamshopping, Fitbit, news, best tech, fitness trackers, Samsung
All products recommended by Engadget are selected by our editorial team, independent of our parent company. Some of our stories include affiliate links. If you buy something through one of these links, we may earn an affiliate commission.

The fitness tracker isn’t dead, and if you’re reading this, you’re probably one of the people keeping these little devices alive. Smartwatches have all but taken over the mainstream wearable space, but the humble fitness tracker remains an option for those who want a gadget to do one thing right all the time. Despite the headwinds, there are still a bunch of fitness bands out there to choose from. Engadget has tested many of them and picked out the best for most people.

What do fitness trackers do best?

The answer seems simple: Fitness trackers are best at monitoring exercise, be it a 10-minute walk around the block or that half marathon you’ve been diligently training for. Obviously, smartwatches can do that too, but there are some areas where fitness bands have the upper hand: focus, design, battery life and price.

When I say “focus,” I’m alluding to the fact that fitness trackers are made to track activity well; anything else is extra. They often don’t have the bells and whistles that smartwatches do, which could distract from their activity-tracking abilities. They also tend to have fewer sensors and internal components, which keeps them smaller and lighter. Fitness trackers are also a better option for those who just want a less conspicuous device on their wrists all day.

Battery life tends to be better on fitness trackers, too. While most smartwatches last one to two days on a single charge, fitness bands will last five days to one week — and that’s with all-day and all-night use.

When it comes to price, there’s no competition. Most worthwhile smartwatches start at $175 to $200, but you can get a solid fitness tracker starting at $70. Yes, more expensive bands exist (and we recommend a few here), but you’ll find more options under $150 in the fitness tracker space than in the smartwatch space.

When to get a smartwatch instead

If you need a bit more from your wearable, you’ll likely want a smartwatch instead. There are things like on-watch apps, alerts and even more robust fitness features that smartwatches have and fitness trackers don’t. You can use one to control smart home appliances, set timers and reminders, check weather reports and more. Some smartwatches let you choose which apps you want to receive alerts from, and the options go beyond just call and text notifications.

But the extra fitness features are arguably the most important thing to think about when deciding between a fitness tracker and a smartwatch. The latter devices tend to be larger, giving them more space for things like GPS, barometers, onboard music storage and more. While you can find built-in GPS on select fitness trackers, it’s not common.

Fitbit's Charge 5 has everything most people would want in a fitness tracker. First and foremost, it's not a smartwatch. That means it has a slightly lower profile on the wrist and lasts days on a single charge while tracking activity and sleep. It also has a full-color AMOLED display — a big improvement from the smaller, grayscale screen on last year's Charge 4. That display, along with a thinner design, make Charge 5 feel more premium than its predecessor.

But it also costs $180 — $30 more than the Charge 4 — and that's due in part to the design upgrades but also some additional features. The Charge 5 has EDA sensors for stress tracking and it will eventually support ECG measurements and Daily Readiness Scores (the latter is for only for Premium subscribers). Those are on top of existing features that were carried over from the Charge 4 — most notably, Fitbit Pay support and built-in GPS. The former lets you pay for coffee or groceries with a swipe of your wrist, while the latter helps map outdoor runs, bike rides and other activities. Built-in GPS remains the star of the show here — it's fast and accurate, making the Charge 5 the best option if you want a do-it-all wearable that’s focused on fitness.

A more subtle-looking alternative is the $100 Garmin Vivosmart 4. It’s thinner than the Charge 5 and fits in a bit better with bracelets and other jewelry you might wear regularly. But its attractive design is only part of its appeal — Garmin knows how to track fitness, and the Vivosmart 4 is proof that you don’t need to drop hundreds on one of the company’s fitness watches to get a capable device.

Like the Charge 5, the Vivosmart 4 tracks all-day activity and sleep and has a pulse ox sensor for blood oxygen saturation measurements. It has only connected GPS capabilities, and it has universal music controls that can control the playback of most anything. The band is also waterproof and can track basic swim workouts, plus it also has a battery life of up to seven days. While it’s similar to the Charge 5 in that the Vivosmart 4 works with both Android and iOS devices, it’s a bit more flexible as it syncs with Apple Health (the Charge 5 and other Fitbit devices do not).

If you only have $100 to spare, the Fitbit Inspire 2 is the best option. It strips out all the luxury features from the Charge 5 and keeps only the essentials. You won’t get built-in GPS, Fitbit Pay or Spotify control but you do get excellent activity tracking, automatic workout detection, smartphone alerts and plenty more. As the updated version of the Inspire HR, the Inspire 2 includes a heart rate monitor, which the device uses to keep track of all-day heart rate, active zone minutes, sleep stages and more.

The Inspire HR is thinner than the Charge 5 but it also has interchangeable bands, so you can switch up its style whenever you feel like it. Its design is also swimproof, and it should last up to 10 days on a single charge. Fitbit also recently added Tile-tracking to the Inspire 2, allowing you to find your misplaced band using the Bluetooth locator feature and the Tile mobile app. All of these features make it the best value fitness tracker you can get.

The $60 Samsung Galaxy Fit 2 band is almost like a more affordable Garmin Vivosmart 4. The two trackers share the same skeletal design but the Galaxy Fit looks a bit more utilitarian — you can swap out its bands, though — something you can’t do on Garmin’s device.

We haven’t given the Fit 2 the full review treatment, but Engadget’s Cherlynn Low was impressed with the original Galaxy Fit: the Tizen-based interface is colorful and easy to use, and plenty of people will appreciate its durable, no-nonsense design. It tracks a bunch of workouts as well and even has auto-exercise recognition. That’s on top of its daily activity tracking and sleep monitor, all of which uses the built-in heart rate monitor to collect pulse data throughout the day.

The kicker for the Galaxy Fit 2 is battery life — the tiny tracker can last for up to 15 days on a single charge, and you can even extend it to 21 days if you change some settings. That’s much longer than most competing bands, so even if Samsung isn’t as comprehensive as Garmin or Fitbit is when it comes to fitness data collection and analysis, the Galaxy Fit 2 is a good option for those who want a basic tracker that they can safely forget to charge each night.

All of the previously mentioned fitness trackers are attractive in their own way (bonus points to those that have interchangeable bands), but they share a similar look. There aren’t many alternative designs for these devices anymore. The $70 Withings Move watch is an exception, and one of the most traditionally fashionable fitness trackers you can get. It’s an analog watch with a couple of health monitoring features including step, calorie, distance and sleep tracking, connected GPS, auto-recognition for more than 30 workouts and a water-resistant design. But we really love it for its button-cell battery, which can last up to 18 months before needing a replacement.