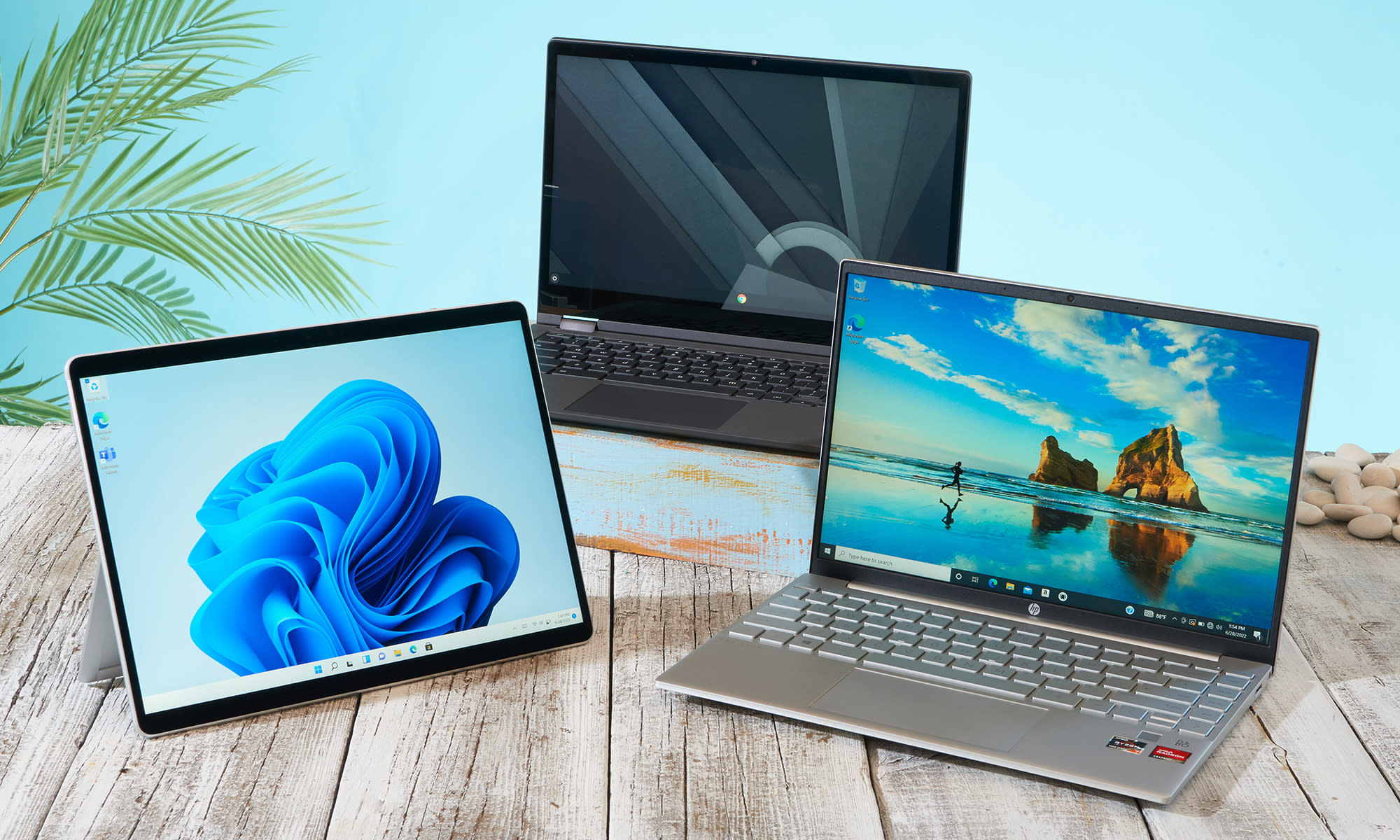 Our favorite machines for classes on campus, online and everywhere in between.

C. Low
@cherlynnlow
August 22, 2022 9:46 AM
In this article: thebuyersguide, gear, Lenovo, backtoschool21, back to school, microsoft, commerce, streamshopping, apple, best laptops, acer, dell, samsung, bts2020, bts2021, hp, feature, Razer
All products recommended by Engadget are selected by our editorial team, independent of our parent company. Some of our stories include affiliate links. If you buy something through one of these links, we may earn an affiliate commission. All prices are correct at the time of publishing.

Whether you’re heading to a physical campus, taking classes online or a mix of both, a laptop is sure to be the control center for your studies. Getting a new machine can better help you stay on top of your schedule and handle your furious multitasking with dozens of tabs devoted to research while you write your essays. Given we’re still dealing with ongoing inflation and the global chip supply shortage, you might be concerned about rising prices or what might be in stock. The good news is, companies are still making a ton of new laptops, and there are plenty of models for you to consider. We compiled this guide to help you make the right choice, alongside a list of this year’s best laptops.

Since the introduction of Apple’s M1-powered MacBooks and Windows 11 last year, not much has changed significantly. Apple unveiled its new M2 system-on-chip (SoC), alongside two laptops that are equipped with it, including a redesigned MacBook Air. Meanwhile, new PCs keep getting announced, with models this year typically powered by 12th-gen Intel processors or the latest AMD Ryzen chips.

Though the shift to ARM-based systems has been successful for Apple, the PC industry is still struggling to keep up, and Windows on ARM is still tough to recommend. Snapdragon laptops may look and feel sleek, offer excellent battery life and built-in cellular radios, but they’re typically quite expensive, especially considering their limited app compatibility.

Speaking of, most laptops with top-of-the-line specs can cost you around $1,800 to $2,000 these days. For most students, though, a midrange machine might be enough. Depending on your field of study, you could get by with an Intel Core i3 processor or equivalent, with at least 6GB of RAM. If you need to run specialized software for design or programming, consider upgrading to a beefier system with more memory. On the other hand, if you do most of your coursework online or in a browser, getting a Chromebook could save you a lot of money.

You’ll also want to pay attention to a device’s weight. There are a lot of premium ultraportables in the 13-inch category, with chips like Intel’s Core i3 or i5, that cost around $1,000. And if that’s too expensive, you’ll still have respectable options in the $600 to $800 range, but they might be heavier and use older, slower processors. I’ve included our favorite budget-friendly model in this roundup but we also have a complete guide to more-affordable laptops that you can check out as well.

With some laptop makers deciding to get rid of headphone jacks this year, it’s important to check specs lists when you’re shopping for newer machines. If you don’t have wireless headphones or use equipment that plugs into the 3.5mm jack, you’ll want to steer clear of devices like Dell’s new XPS 13 Plus.

Finally, while most laptops in 2022 offer WiFi 6 or 6E and Bluetooth 5.0 or later, the compatible routers or other devices that would enable those faster connections aren’t very prevalent yet. Chances are, your campus WiFi might still be stuck on an older setup, so it’s not crucial that you get a system with the latest standards yet. Of course, it doesn’t hurt to get a laptop that’s future-proof, but just know that of all the things to look out for, WiFi 6E shouldn’t be a dealbreaker in your decision-making process.

It's hard to beat Apple's MacBook Air if you want a powerful machine for college that won't weigh you down. You actually have two good options this year — the new M2-powered MacBook Air and the MacBook Air M1. The M2 laptop earned a score of 96 from us for its impressive performance, gorgeous 13.6-inch Liquid Retina display and its refined design that's even thinner than the M1 machine that came before it. Our biggest gripe with this laptop is its price — the M2 notebook will set you back $200 more than the M1, so you're looking at spending at least $1,199 if you want the latest and greatest from Apple.

However, even though it’s older, the M1 MacBook Air is a solid machine, outperforming many PCs while maintaining a fanless design. You’ll still get a great keyboard and excellent battery life, along with a nice Retina display. Of course, it uses a 720p webcam, while the new model has a sharper 1080p setup housed in a notch. The latter also has thinner display bezels that make it look more modern, as well as a MagSafe port that lets you keep charging while still having access to the device’s two USB-C ports. But if you’re already living a largely wireless life and don’t mind a not-so-great camera, you might find the M1 MacBook Air is a better deal.

The best PC has long been Dell’s well-rounded XPS 13 series and I still recommend it to anyone that doesn’t want a Mac. Yes, the new XPS 13 Plus lacks a headphone jack, and we haven’t got one in to test yet. But the XPS 13 is a well-rounded machine and reliable workhorse that will get you through classes and late-night writing sessions without breaking a sweat.

Like its predecessors, the XPS 13 Plus offers a lovely OLED screen with impressively thin bezels and packs a roomy, comfortable keyboard. It also features a new minimalist design that looks more modern. I’m not sure about the row of capacitive keys at the top in lieu of traditional function keys, but from our time with an early sample, they at least worked.

If you don’t like the changes Dell has made to the XPS 13, or if you definitely need a headphone jack, the older generations are still solid options. There’s also the Samsung Galaxy Book 2 Pro series, which feature beautiful OLED screens and sharper webcams in thin and light frames. I also like Microsoft’s Surface Laptops, and the most recent edition offers great performance and battery life, albeit in an outdated design.

Just because your laptop might primarily be for school or work doesn’t mean you can’t use it for fun. Those looking to game on their machines should prioritize responsive screens and ample ports for their favorite accessories that can best help them defeat their virtual enemies. If you’re considering a gaming-first machine that you can use for school, check out our guide to buying a gaming laptop. It covers details about different CPUs and GPUs, minimum specs and more. Our favorite gaming laptop is the Razer Blade 15, which has an Intel Core i7 processor, and an NVIDIA RTX 3070 graphics for $2,500.

It’s the most expensive item on this list, but you also get a 15-inch quad HD screen that refreshes at 240Hz. Different configurations are available, depending on your preference, including a Full HD 360Hz and a 4K 144Hz version. The Blade series is also one of the most polished gaming laptops around.

Those looking for something cheaper and more portable should consider the ASUS ROG Zephyrus G14, which was our favorite model last year. The main reason it got bumped down a notch is because the 2022 refresh is almost $600 more expensive. It’s still a solid gaming laptop though, with an excellent display, roomy trackpad and plenty of ports in spite of its thin profile.

If you can do most of your schoolwork through web-based apps, a Chromebook is worth considering. Sure they don’t generally look fancy, nor have high-end specs. But they’re often more affordable and have longer battery life. Our favorite Chromebook is Lenovo’s Flex 5 Chromebook, which Engadget’s resident Chrome OS aficionado Nathan Ingraham described as “a tremendous value.”

This laptop nails the basics, with a 13-inch Full HD touchscreen, a fantastic keyboard and a 10th-generation Intel Core i3 processor. The 4GB of RAM and 64GB of storage may sound meager, but in our testing the Flex 5 held up in spite of this constraint. It’s also nice to see one USB-A and two USB-C ports, eight-hour battery life and a 360-degree hinge that makes it easy to use the Flex 5 as a tablet. That’s a bonus, especially now that Chrome OS supports Android apps.

Though the Flex 5 is almost two years old by now, it’s a solid device for around $400. In fact, you can sometimes find it on sale for as little as $300, making it a great option for someone looking for a basic browser-based machine on a tight budget.

If you’re looking for something under $800, your best bet is the HP Pavilion Aero 13. For $750, you’ll get a Full HD screen with a 16:10 aspect ratio and surprisingly thin bezels, as well as a comfortable keyboard and spacious trackpad. Importantly, the Aero 13 provides relatively powerful components compared to others in this price range, with an AMD Ryzen 5000 series processor and Radeon graphics. Plus, it has a generous array of ports and enough juice to last you the entire work day and then some.

For those who need their laptops to occasionally double as tablets, the Surface Pro series is a no-brainer. Compared to notebooks with rotating hinges, tablets with kickstands are often much slimmer and lighter. The Surface Pro 8 is the most recent model and it features Microsoft’s sleek new design with a thinner profile and minimal bezels. The Pro 8 also has a 120Hz display that makes scrolling long documents or spreadsheets feel much faster, and you can drop the refresh rate down to 60Hz if you want to conserve battery life.

We also like Microsoft’s Type Covers, though it’s worth noting that they’ll cost you an additional $100 to $180. Those who want to doodle or sketch on the display may appreciate the Surface Slim Pen 2’s haptic feedback.

Unless you’re bent on sticking to Apple’s ecosystem, in which case an iPad Pro would suit you best, the Surface Pro 8 is arguably the best convertible laptop around.