Sucker Punch hasn’t released a game since Infamous: First Light back in 2014. But the developer has not spent the six years since sitting idle. They’ve undertaken a herculean effort to produce one of the final AAA titles for the Playstation 4 platform -- the PS4’s swan song, if you will. I, for one, have been eagerly awaiting its release since its early previews at Paris Games Week 2017 and am delighted to report that Sucker Punch has crafted a game that would make Akira Kurosawa proud.

Based on the Mongol invasion of Tsushima island in the 13th century, Ghost follows the exploits of Jin Sakai, a samurai and nephew of the local lord, as he attempts to rally the island’s populace and drive back the invading horde after a crushing defeat at Komodahama beach (shortened to Komoda in the game). The story follows a traditional three act format, beginning at the battle on the beach and progressing as Sakai liberates more and more of his home. The mission structure is similar to FarCry or Assassin’s Creed, with a mix of quests that either advance the overall story, assist one of the game’s primary side characters, clears towns of their occupying forces, earn goodwill with the populace or gain new powers and weapons.

Being a samurai game, you’re going to be slicing and dicing your way through enemy crowds using the Sakai family’s heirloom katana but your wakizashi won’t spend much time in its sheath either. It’s your primary tool for stealthily assassinating unwary Mongols. This duality plays into one of the game’s larger themes. At the outset, Sakai strictly adheres to the samurai code of honor that demands a standup fight. But as the story progresses and Sakai’s situation grows increasingly desperate, he finds his morals and methods becoming ever more flexible. It’s fascinating to watch as he struggles, both internally and against the characters around him, over the consequences of his actions.

Beyond his swords, Sakai goes into battle armed with both a fast-firing half-bow and a stronger full bow (though you will have to complete a set of missions to unlock it), as well as a wide array of ninja-esque gear like kunai, smoke bombs, black powder grenades — all of which can be upgraded as you gain more experience. You’ll also have access to a jaw dropping variety of armor, each set of which is upgradeable, grants a specific set of stat bonuses, and can be endlessly customized with various dye sets and discoverable skins. You won’t find any health packs out in the wilds of Tsushima, however, your expandable Resolve bar replenishes your health as well as drives your special moves.

Mechanics-wise, you’re not going to see anything particularly revolutionary. In fact, throughout this game, I noticed numerous similarities to other popular adventure titles. For example, the combat system with its light and heavy blows, parriable and unblockable attacks, felt really reminiscent of the Batman Arkham series, except of course with swords. The flora and environment of Tsushima had me convinced more than once that I was playing Horizon: Zero Dawn. The platforming aspects are very similar to the Uncharted series (but far more automated), and you’ve even got a Seikiro-like grappling hook to use.

But while these individual aspects on their own aren’t anything groundbreaking, Sucker Punch has managed to seamlessly meld them together, hone and polish the overarching gameplay experience into something truly phenomenal. The side missions can get mildly repetitive -- there’s never not a peasant in danger -- and while you won’t find the same degree of over-the-top grandiose, deity-killing action of God of War or the massive explorable map of Assassin’s Creed Odyssey (though you do have a horse), Ghost delivers a richly detailed world and an immensely compelling story that will leave you cheering. Like your customizable armor, how you take in the story is entirely up to you. Ghost offers both three difficulty settings, subbed and dubbed dialog options as well as a wild black-and-white Kurosawa Mode that mimics old 35mm filmstock.

Although Ghost shares similar aspects to other AAA titles, it boasts myriad unique details and small touches that really bring the story to life. During his travels, Sakai will come across onsen (Japanese hot springs) that replenish and expand his health bar, slice through bamboo training poles to upgrade his Resolve, visit Shinto and Inari shrines to gather stat-boosting charms and talismans, and even compose haiku at scenic overlooks. You can challenge groups of enemies in standoffs to inflict one-hit kills or engage in pulse-pounding samurai duels against fellow swordmasters. Finish off fallen but not-quite-dead-yet enemies with the End Suffering move (aka stabbing them when they’re down). If your katana is still bloody after the battle, you’ll automatically wipe it off before resheathing it. There’s even a bow command so that you can properly pay your respects at shrines. My favorite detail however is the waypoint arrow. There isn’t one, you’re guided to your next destination by following the direction of the wind as it blows across the landscape. 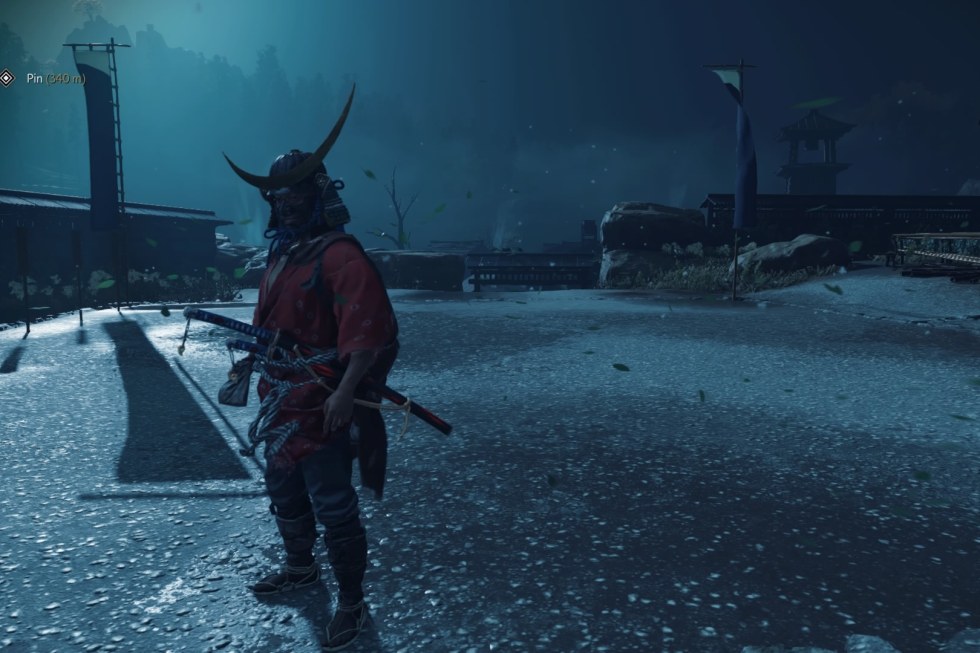 The combat is also interesting. Your enemies come in four basic flavors -- swordsmen, spearmen, shield men and brutes -- each of which requires you enter a different stance to most effectively counter them. Early on in the game you can generally just hack your way through your enemies without much adjustment but as you progress and they grow stronger and more capable, you’ll find yourself flowing back and forth between multiple stances throughout each fight. Luckily the controller setup enables you to do this reliably and nearly instantly with just two button presses. Similarly, you can quickly flip between your secondary weapons (the kunai, smoke bombs, etc) during even hectic fights with just a couple button presses. It’s so much less cumbersome than what we had in Nioh.

Overall, what Sucker Punch has done here is nothing short of spectacular. Ghost offers a unique and fascinating gaming experience that pulls you in from the very first swing of your sword. Sakai is surrounded by diverse, well-developed characters -- even the Mongol leader, as much of a war-hungry bastard as he is, is written and portrayed with stunning depth of character and nuance. I couldn’t bring myself to skip a single cutscene in the entirety of the game. My only complaint is that this isn’t a PS5 launch title because for as richly rendered as Ghost is, there were a handful of points where you can see where the current generation graphics couldn’t quite deliver on what the animators envisioned. Still, for as much as I’d built up this game in anticipation, Ghost of Tsushima exceeded every single one of my expectations. And if this ends up being our final AAA game release on this platform, I’d say the PS4 will be going out on top.

In this article: PS4, Ghost of Tsushima, sucker punch, samurai, Sony, review, gaming
All products recommended by Engadget are selected by our editorial team, independent of our parent company. Some of our stories include affiliate links. If you buy something through one of these links, we may earn an affiliate commission.