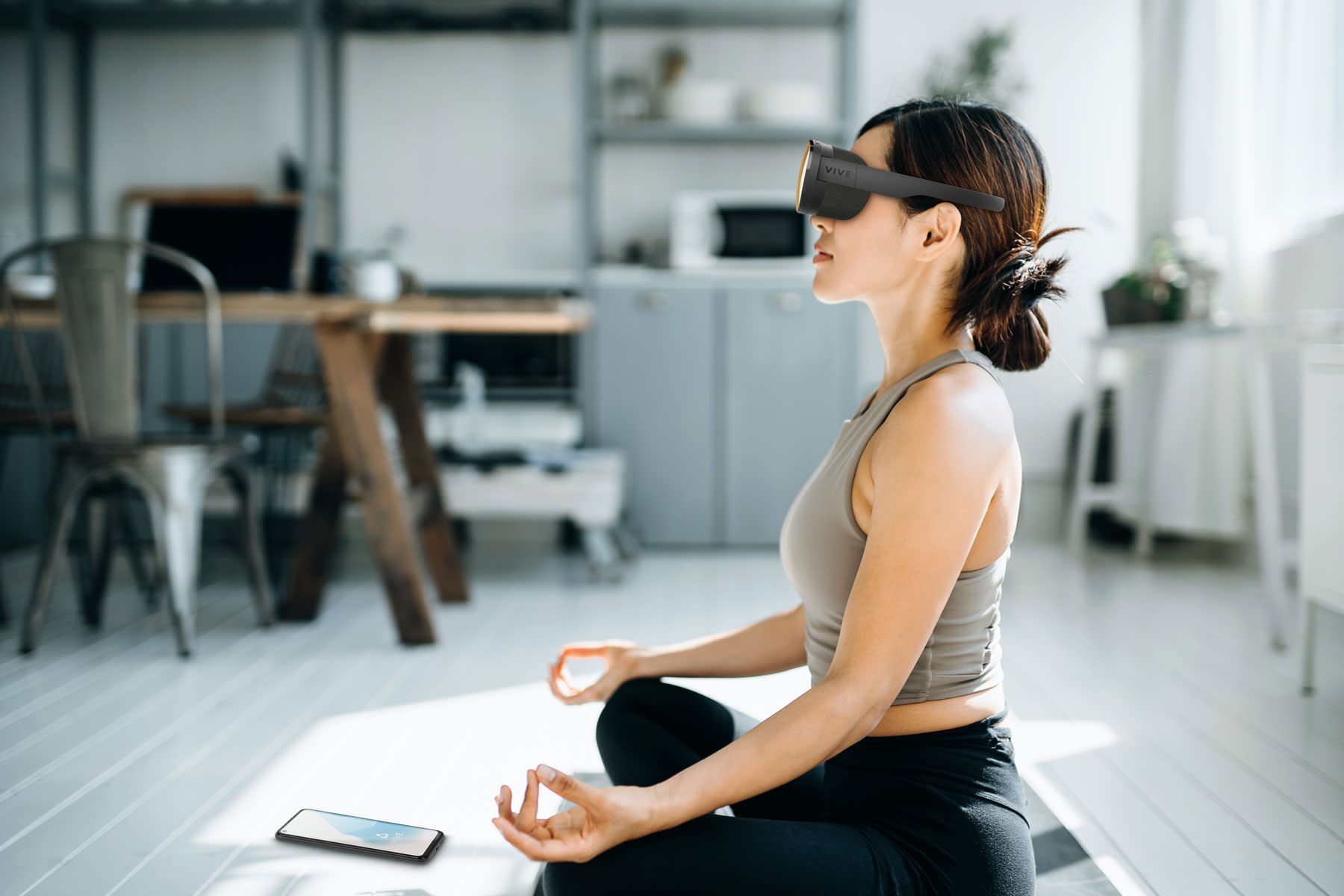 Splitting the difference between VR and a personal cinema

HTC is today launching a lightweight headset designed to split the difference between a standalone VR headset and a personal cinema. The HTC Vive Flow is a pair of glasses weighing just 189 grams (6.6 ounces) which pair with a smartphone to let you play some VR content or simply watch TV. It’s marketed as both a piece of tech to keep you entertained and a device to help you improve your mental wellbeing.

Naturally, the company doesn’t want to talk too much about the technology inside Flow, preferring to focus on what it can do. What we do know, however, is that it has two “1.6K” displays running at a 75Hz refresh rate and offering a 100-degree field of vision. There’s no battery per-se, except for a tiny cell designed to make sure that it’ll shut down safely if Flow is severed from whatever power source you've connected its USB-C cable to.

It’s in this regard that it’s set up more like a personal cinema than it is your standard VR headset, especially with the fairly narrow body. HTC spent a lot of time and effort shrinking the distance between the display and your eyes, and Flow uses a pair of diopter lenses up front. It means that short-sighted folks won’t need to wear their glasses when using Flow, since they can set the lenses up to suit their comfort level.

To ensure that Flow really is portable, HTC set a power budget of 7.5 watts, the upper limit for USB 3’s charging spec. It means you can run this thing off any compatible battery pack (or your phone, in a pinch) as well as a standard socket over a USB-C cable. Some of that juice goes to powering a small active fan in front of the nose, which pulls cold air over your face and pushes warm air out of the Flow’s top vents.

HTC also spent plenty of time talking about how the dual-hinge system will ensure that the Flow’s glasses-like frame will sit comfortably on anyone’s head. A pair of speakers embedded into the arms offer what we’re told is surprisingly high quality spatial audio, and beefy given their relative size. And since they sit on your head like regular glasses, you can wear them laying down should the need arise.

You can pair Flow with your smartphone over Bluetooth or Miracast (for watching protected content) and use the phone as a pointer inside VR content. That limits the number of experiences you’ll be able to enjoy with the gear, but you were hardly going to be able to play Half Life: Alyx on this thing anyway. A pair of camera lenses facing forward will, when the feature is ready, enable the Flow to track your hands for more immersive VR, too.

It's worth saying that this is not, and as I understand it, can never become an AR headset in its current form. Those lenses don't apparently offer much passthrough (beyond what's necessary for motion tracking) and this isn't designed for it anyway.

HTC says that the focus of Flow’s content on “wellbeing, brain training, productivity” and “light gaming,” with apps like Color Connect VR, Space Slurpies and VR meditation app Tripp. The headset will be able to access a special version of Viveport Infinity, offering a wide library of Flow-compatible content for a monthly fee of $5.99. The company added that if users wanted to meditate within the Flow towards the end of the day, a blue light filter will kick in to help ensure that you can get more restful sleep.

If you’re looking to get hold of an HTC Vive Flow, then pre-orders are opening from today, with shipping expected to begin in November. The price is $499, and for that you get the glasses and a soft carrying case thrown-in, but I’d strongly advise you to pre-order if you want one. Doing so entitles you to receive the flask-like hard carrying case, as well as seven pieces of additional VR content thrown in gratis.

Naturally, Flow has become something of a worst-kept secret in technology after many of these details were leaked ahead of time. One of the obvious sticking points is the higher price compared to the Quest 2, although HTC was clear to dispel the notion that the products were equals. Flow, after all, is a not a standalone headset, and HTC believes that the lighter, more elegant hardware will win it fans in the health and fitness market.

All products recommended by Engadget are selected by our editorial team, independent of our parent company. Some of our stories include affiliate links. If you buy something through one of these links, we may earn an affiliate commission. All prices are correct at the time of publishing.
View All Comments
HTC’s Vive Flow is a $499 lightweight VR headset built for entertainment and wellness