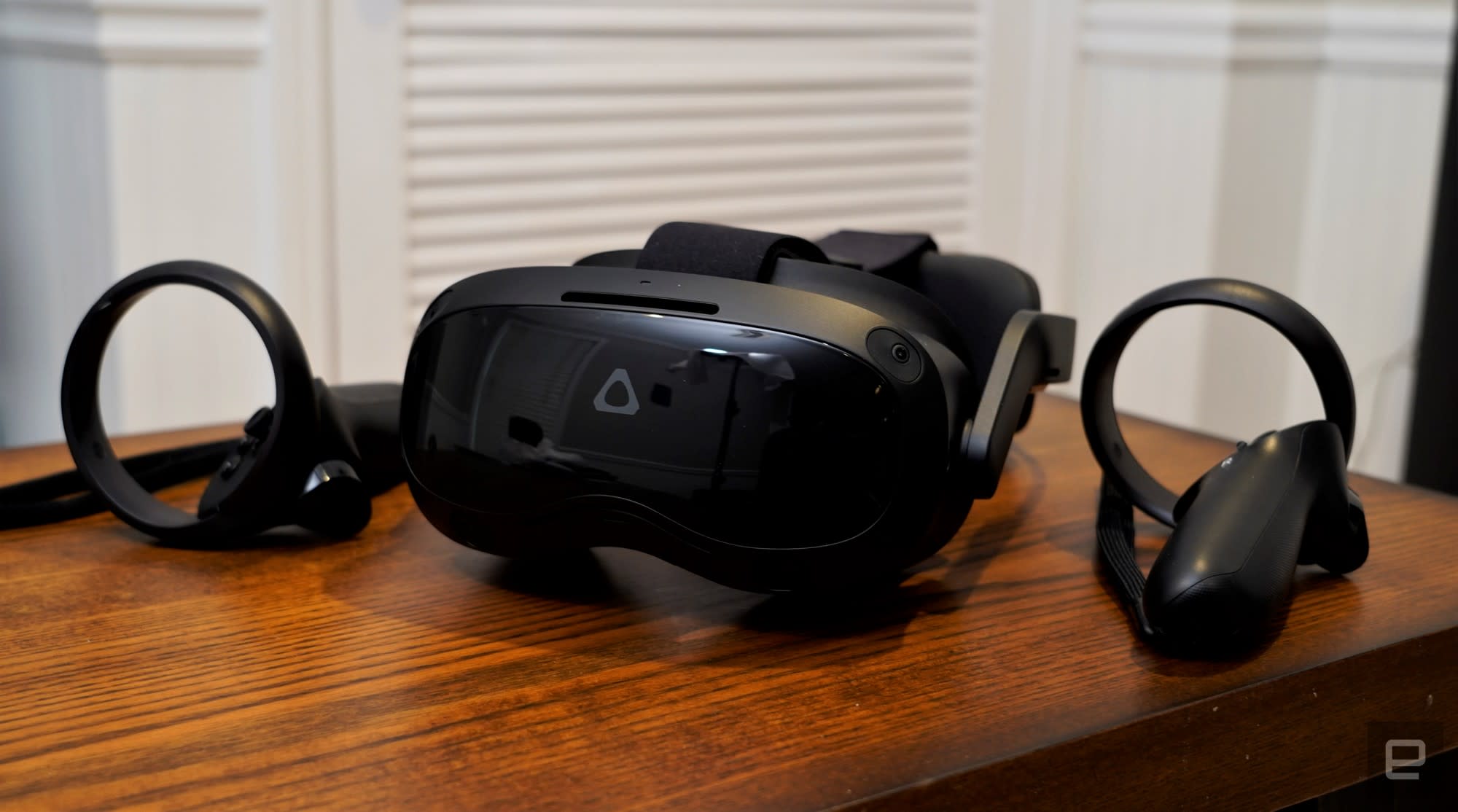 The Vive Focus 3 is the best standalone VR headset and no, you should not buy it

After the Oculus Rift and HTC Vive launched in 2016, bringing virtual reality into homes for the first time, the two companies have gone in very different directions. While Oculus leaned more toward mainstream consumers, especially with last year’s Quest 2, the Vive targeted businesses and the tech savvy. That strategy hasn't always worked out in Vive's favor — the long-awaited Cosmos headset was a disappointment — but it probably makes more sense than competing with Facebook's practically limitless resources head-on.

Enter the Vive Focus 3, a $1,300 standalone headset that's really only meant for businesses. Because it costs $1,000 more than the Oculus Quest 2, the Focus 3 unsurprisingly offers better hardware, ergonomics and build quality than Oculus's headset. It's the difference between building a device that's meant to be used throughout the day in professional settings, and something you may use once in a while for gaming. The Vive Focus 3 is meant to get shit done.

At first glance, the Focus 3 certainly looks more like a premium VR workhorse than the Quest 2. While the Oculus headset has flimsy cloth straps and a minimalist goggle design, the Focus 3 looks like an expensive pair of ski goggles fashioned into a VR device. Its magnesium alloy frame is still technically plastic, but it feels sturdier than the Quest's flimsy case (HTC Vive claims it’s 20 percent lighter and five times stronger than traditional plastic). As much as I liked the Quest 2, you can instantly feel how much Oculus skimped on its materials to reach that low $299 price.

While Oculus leaned into the sleek and curvy Apple gadget aesthetic, HTC Vive went for sharper lines and a more elaborate design. The Focus 3's headstrap, for example, looks far more involved with a plastic frame, tons of cushioning and a rear dial to tighten everything up. It's also angled around the sides so it never touches your ears, which goes a long way toward making the VR experience feel more comfortable. The rear part of the strap may look chunky, but that's because it also houses the Focus 3's battery pack. Putting a bit more junk in the trunk helps to balance its weight, so it's not leaning down on your nose uncomfortably like some earlier VR headsets. (The Quest 2's Elite Strap and rear battery pack offers a similarly balanced feel, so the Focus 3's design isn't completely innovative.)

The Focus 3's battery pack is removable, which allows businesses to keep a single headset running continuously throughout the day. One downside to this unique battery design is that the Focus 3 charges via a proprietary AC adapter, despite having a USB-C port. As a concession, the company includes a dual USB-C cable that connects to the headset and can charge both controllers simultaneously. Your desk may end up looking like a sea of cables, but at least you can make sure all your VR gear is charged.

While its design shows just how much HTC Vive has learned over the years, it's what's under the hood that makes the Focus 3 special. It's powered by a Qualcomm Snapdragon XR 2 chip, similar to the Quest 2, but it's also running at a higher clock speed. (To get faster and more consistent performance, HTC Vive also squeezed in a heat pipe and cooling fan at the front of the headset.) The Focus 3's displays offer 5K resolution (4,896 by 2,448 pixels), a smooth 90Hz refresh rate and a wide 120-degree field of view. In comparison, the Quest 2's screen is close to 4K and has an estimated 90- to 100-degree field of view (depending on where you position the lenses). Both headsets offer LCDs with RGB sub-pixels, which offers a boost in sharpness and clarity compared to PenTile OLED screens from earlier models.

As far as VR technology goes, the Focus 3 has just about everything you'd want in a modern headset. But there are simple, less technical upgrades that I appreciated too, like its support for large 150mm-wide glasses. It usually takes a bit of effort for me to squeeze a headset over my frames, and they inevitably get yanked out whenever I step out of VR. But I never had to deal with that on the Focus 3, thanks to its roomy interior. There's also an IPD adjustment dial to help you fine-tune exactly how its lenses hit your eyes; the Quest 2 only gives you a few options to adjust IPD. The elaborate padding around the front and rear also goes a long way toward making you forget you're even wearing a VR headset.

Even the Focus 3's controllers are better than anything we've seen from HTC Vive before. They look similar to Oculus's, with a round tracking ring, face buttons, as well as the standard grip and trigger buttons. Clearly, they're light years beyond the enormous controllers that the original HTC Vive came with. Still, Oculus has the edge when it comes to overall ergonomics. The Quest 2's gamepads are contoured to better fit your hands, especially during fast-paced games. Holding the Focus 3's controllers, meanwhile, feels more awkward during lengthy VR sessions.

Thankfully, though, the headset itself is comfortable to wear for hours at a time, and it delivers the most immersive standalone virtual reality experiences I've seen yet. I wandered the Louvre in Mona Lisa Beyond the Glass, which let me get inches away from several classic da Vinci paintings. If I tried to do that in real life, I'm sure some security guards would swiftly kick me out. But in VR, I could admire the detail in every work of art. I was also surprised just how great everything looked in the Focus 3. There was more detail than in any Quest 2 experience I've seen, and the large field of view genuinely made me feel like I was walking through the Louvre's ornate halls, instead of just peering in through a pair of VR binoculars.

Similarly, I had a genuine sense of walking through meadows and tropical beaches in the Nature Treks VR experience. The Focus 3's sharp display once again shined when I peered at statues and wildlife up close, but the detail was limited by its mobile hardware. 360-degree YouTube videos also looked fantastic when I fired them up in Firefox VR, but the experience can be hit or miss depending on the quality of the source. And even though the headset doesn't have beefy near-field speakers like the Valve Index and HP Reverb G2 .

I was surprised that the Focus 3 didn't include any sort of built-in multimedia app for watching VR videos, but that really underscores one of its biggest problems: The Focus 3 has a far more limited software library than the Quest. While Oculus has pushed for high-profile exclusives and popular games, like Vader Immortal and Beat Saber, the HTC VivePort store feel practically anemic. There are a handful of shared titles across both platforms, like Last Labyrinth and Tokyo Chronos, but it's clear they aren't a big focus for HTC Vive.

At this point, even installing new experiences is more of a pain on the Focus 3, since you need to take off the headset to purchase apps and games from your web browser. Meanwhile, the Quest and Quest 2 let you buy things from within the headset and a mobile app. But I suppose that's not a huge problem for HTC Vive, since the Focus 3 isn't meant for consumers at all. Instead, IT departments will likely preload the software their workers actually need. (There's also going to be a Vive Business App Store eventually, though it's unclear if that will offer a better purchasing experience.)

That's one reason why we're not scoring this review. This $1,300 headset isn't meant to be consumer friendly. And honestly, I couldn't even test some of the more popular business apps, like Vive Sync's virtual collaboration tool and Engage's event app. HTC Vive's previous Focus headsets also gained a reputation for being easy ways to train employees using apps like Virti. And while that app certainly looks cool in the Focus 3, I can't exactly tell if it's offering effective training or not.

There are also features I haven't been able to effectively test out. The Focus 3 offers Vive Business Streaming, which lets you connect the headset to a VR PC over a USB 3.2 cable or Wi-Fi. But it's apparently very picky, as none of the USB cables I used were even recognized by the software (and some would just throw an error saying they weren't USB 3.0 capable, even though I knew they were). You can also stream PC VR over Wi-Fi, but that only works if your computer is connected directly to your router over Ethernet, and if you have a strong wireless connection with the headset. That just wasn't possible in my basement office. I'm hoping HTC Vive works out its connection requirements, especially since Oculus Link on the Quest is far less demanding when it comes to cables.

No matter how you cut it, the Quest 2 is still the standalone VR headset most consumers should buy. But the Focus 3 is perfect for businesses looking for something a bit more sturdy and powerful. For them, a $1,300 device makes more sense than investing tens of thousands on more elaborate training tools.