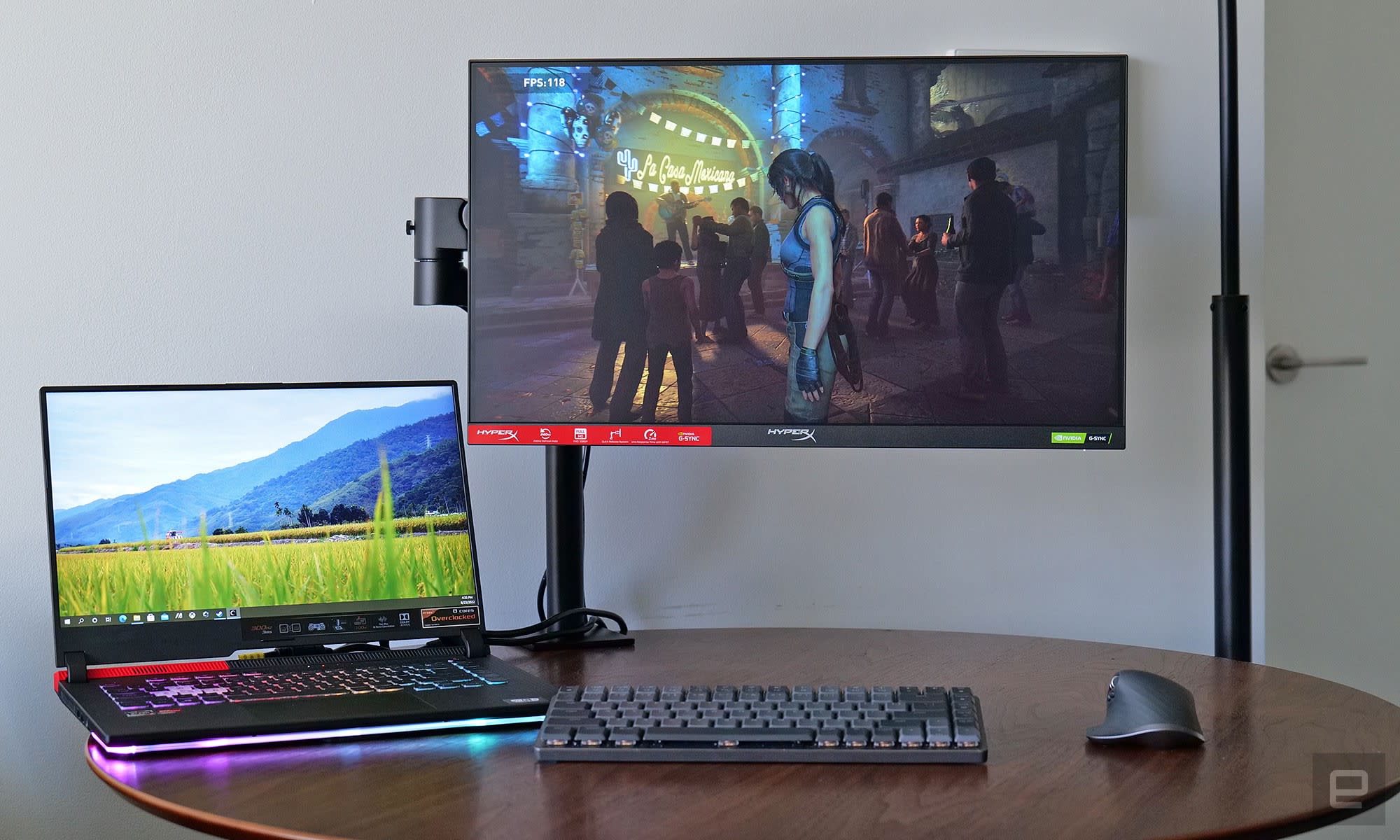 HyperX’s two new gaming monitors each come with an included arm, but no stand.

Earlier this summer, Sony launched its first line of gaming monitors under the Inzone brand, and now HyperX is joining the fray with two displays of its own. However, with the new Armada line HyperX is putting its own spin on the category, because instead of being bundled with a traditional stand, the company has created an all-in-one package featuring an adjustable monitor arm.

Following HP’s acquisition of HyperX last year, the brand has been slowly branching out into new categories including wireless earbuds and now monitors. At launch, the Armada line will consist of two gaming monitors with slightly different target audiences: There’s the Armada 25, designed for more competitive gamers, which features 1,920 x 1,080 resolution and a 240Hz refresh rate. Meanwhile, for those who prefer richer, more detailed graphics, the larger Armada 27 features 2,560 x 1,440 resolution, a 165HZ refresh rate and VESA HDR 400 certification.

Both monitors have three inputs (one DisplayPort 1.4 and two HDMI 2.0 ports), but what really sets them apart from similarly priced rivals is that instead of shipping with a typical monitor stand, the Armada was designed from the start to work with HyperX’s ergonomic arm and desk mount. For HyperX, the goal is to encourage and provide gamers with a simple solution that frees up desk space for things like extra large mousepads, wireless charging pads or any other peripherals you want to keep close at hand.

The pivot to monitor arms has been picking up steam among PC gamers and HyperX believes so much in the benefits of ergonomic arms that it isn’t even selling a standard monitor stand separately. (You will, however, be able to buy additional arms or monitor attachments individually.) And after checking out the Armada 25 for myself, even though I’ve personally never owned a display mounted on an arm (though I’ve always wanted one), I can sort of see why. But despite all the positives, there are some obvious drawbacks too.

The box for the Armada 25 comes with everything you need to get started, not to mention a very handy and easy-to-use setup guide. The first step is finding the base and mounting it to an appropriate surface using the built-in clamp. From there, you assemble the rest of the arm before snapping HyperX’s custom mount to the back of the monitor and dropping everything in place. The whole process is a breeze, and in total, it took me less than 10 minutes to go from start to finish. After that, it’s just a matter of using the included Allen wrench to fine-tune the arm’s tightness and range of motion.

Assuming you have your cables tucked away neatly, the switch to an ergonomic arm has a surprisingly big impact. Everything just feels a bit tidier. Not only do you instantly have more freedom to arrange peripherals like stand mics, webcams and more, you also get extra flexibility to place your monitor at the correct height and angle for your posture.

As someone who spends way too much time in front of a desk, in recent years I’ve found myself looking for ways to avoid the aches and pains caused by craning your neck to look at screens. This typically meant using books or stacks of paper to elevate displays so I could look straight ahead instead of down, which can be especially bad when using a laptop. But with an arm, that’s never an issue. And might I add, the whole feels extremely stable, unlike some of the cheaper alternatives I’ve considered in the past.

However, the downside is that only offering an arm can limit where you can set up your monitor. As I’ve written about previously, due to the pandemic I’ve had to create a makeshift remote working station centered around a desk that sacrifices some practicality for good looks. And unfortunately for me, my desk is so thick the two-inch clamp on HyperX’s arm just doesn’t fit. This meant I had to test the Armada 25 at my dining table, instead of next to my desktop where I really want it.

On the bright side, the display itself looks great considering its price. You get an IPS panel with 1ms response times (gray to gray), a non-reflective matte finish and wide viewing angles. It's not the most colorful display, with colors covering 99 percent of the standard sRGB gamut, but getting a 240Hz refresh rate on a monitor that comes with an arm for $450 is a pretty good deal. And while HyperX is marketing both Armadas as being G-Sync compatible, they also support AMD’s FreeSync as well. Unfortunately, due to only having HDMI 2.0 instead of 2.1, you won’t get full 120Hz support on consoles like the Xbox Series X.

Also, perhaps the most promising thing about the Armada line is that HyperX makes it really easy to add more displays to your setup down the line. In addition to HyperX’s proprietary bracket, its ergo arm also supports standard VESA plates. You can also get add-on mounts (available separately) that let you attach more monitors to the same arm. Each arm supports up to 20 pounds, which means each one can hold up to four Armada 25s or two Armada 27s. And while I wasn’t able to test it out myself, you can also wall-mount the arms or install them on desks with pre-drilled cable holes (up to 2.4 inches if you’re using the included grommets).

So despite the difficulties I encountered with my furniture, the Armada line is rather flexible. That said, I still wish there were some kind of fallback option for people like me who live in a place where a monitor arm doesn’t quite fit. But if you’ve been thinking about upgrading your work or gaming station with a more streamlined gadget layout, HyperX’s new monitor line makes it really easy to ditch the traditional stand for something more elegant.

All products recommended by Engadget are selected by our editorial team, independent of our parent company. Some of our stories include affiliate links. If you buy something through one of these links, we may earn an affiliate commission. All prices are correct at the time of publishing.
View All Comments
HyperX Armada 25 hands-on: No stand, no problem