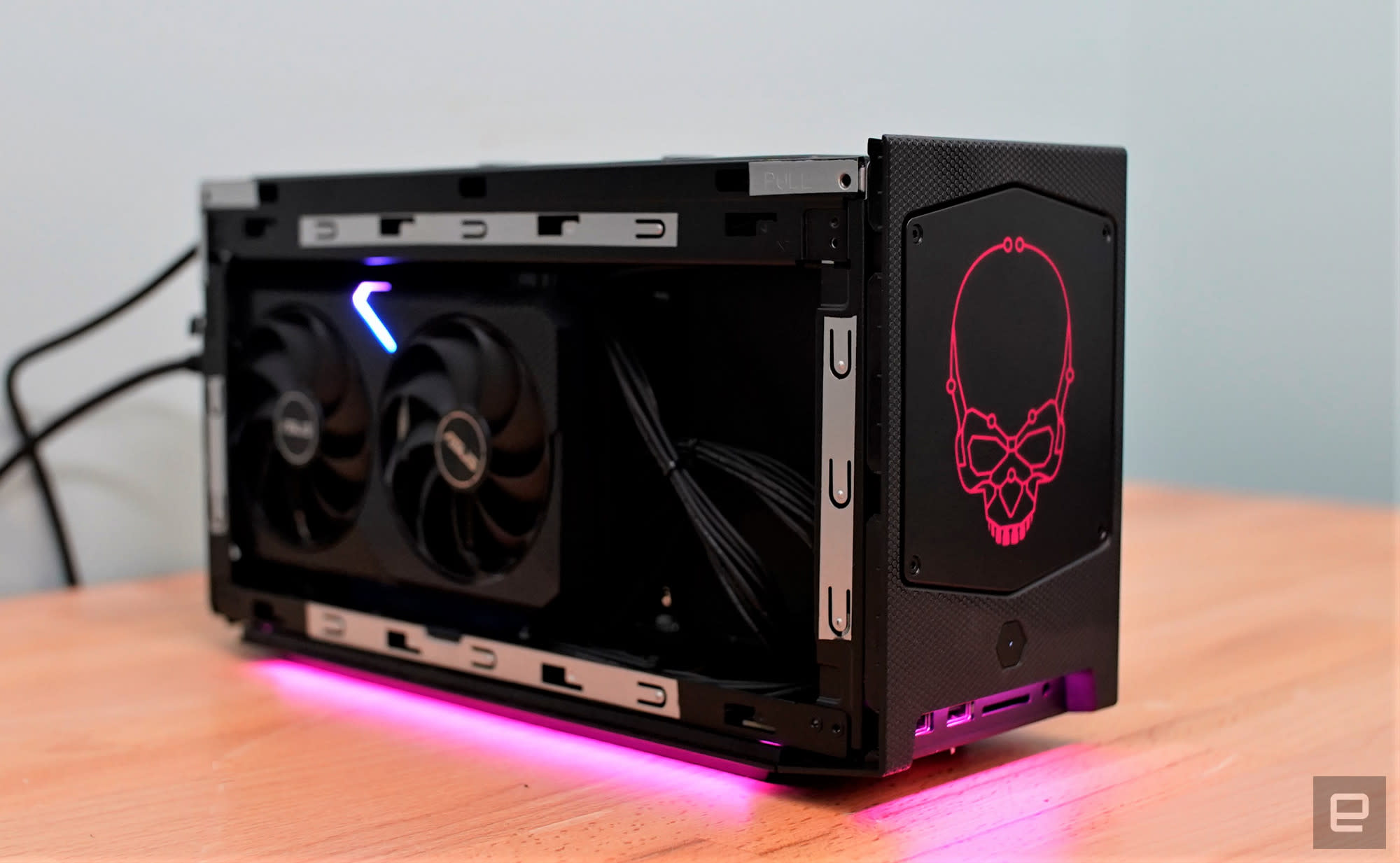 It's more practical than the last NUC Extreme, but it's still wildly expensive.

Who is a powerful miniature desktop for? That was the question running through my mind when I reviewed Intel's NUC 9 Extreme last year. It was the company's most powerful compact PC kit (NUC stands for "next unit of computing") at the time. But it was so wildly expensive — especially since you need to add your own RAM, storage, GPU and OS — it didn't make sense for anyone but mini-PC obsessives. The new NUC 11 Extreme, AKA "Beast Canyon," is pretty much the same story. But it's at least a bit cheaper and more flexible, thanks to its faster 11th-gen Intel CPU and support for full-sized GPUs.

I'll get this out of the way up front: Yes, this NUC is dramatically larger than any previous units we've seen. The 5-liter NUC 9 Extreme already seemed to be pushing the limits of a compact PC, but at 8 liters, the NUC 11 Extreme is what you'd call a Big Boy. Sure, it beats making space for a mid-tower PC on your desk, but it's still pretty substantial. You can't blame Intel too much: Gamers wanted full-sized GPUs in a NUC, this is just the most efficient way to make that happen. The big issue now is that Intel is directly competing with increasingly popular Mini-ITX PC cases, which are cheaper but typically more complex builds.

The NUC 11 Extreme screams "gamer" before you even turn it on. Its black metal case sports mesh air vents along the sides, giving you a peek at the GPU within and three large case fans up top. For a small box, it's clearly meant to push a lot of air. Hit the power button and it springs to life with an LED skull along the front panel, as well as underside LED lighting. I'm not one for too much gamer bling, but Intel's lighting comes is relatively subtle compared to many other PC makers.

Our review unit featured Intel's 11th-gen i9 Compute Element, a modular card with an eight-core 11900KB CPU. It can also be purchased separately as an upgrade for NUC 9 Extreme customers. That was always the dream for Intel's NUC Extreme platform, which also includes Razer's Tomahawk mini-PC. Wouldn't it be nice if you could just yank a card out in a few years to get a new CPU? There are some compromises, though. According to Intel, there's no front panel audio support when using the new Compute Card on the NUC 9 Extreme, and there's no guaranteed PCIe 4.0 either. The company also says compatibility with other boxes depends on how the their NUC base board was designed. (We've reached out to Razer to see if the Tomahawk can be upgraded.)

To help speed up our review process, Intel sent along a unit pre-configured with Windows 10 Pro, 16GB of RAM, a speedy 512GB NVMe SSD, and an ASUS RTX 3060 GPU. Remember, you'll need to gather all of that gear too if you you a NUC kit for yourself (or just buy one pre-built from resellers like SimplyNUC).

While I've appreciated all of Intel's previous performance-oriented NUCs, including 2018's "Hades Canyon" model and 2016's "Skull Canyon," they've always been held back by their notebook processors. The NUC 11 Extreme, though, runs more powerful CPUs with a 65-watt TDP. That means it can tap into more power like a traditional desktop gaming chip. And based on our benchmarks, you can definitely see the benefits of that boost.

In PCMark 10, the NUC easily outpaced every Windows PC we've seen this year. It was slightly faster than ASUS's ROG Strix G15, which was running AMD's powerful Ryzen 9 5900HX. Admittedly, we haven't looked at any gaming notebooks with 11th-gen Intel chips, but based on that AMD comparison I'd still expect the NUC 11 to come out ahead of those. We also haven't tested comparable 11th-gen desktop CPUs yet, but I'd wager they'll perform better since they can draw more power.

Apple's M1 iMac was the only computer we've reviewed that beat the NUC when it came to single-core performance in Geekbench 5, but Intel's machine still came out ahead in multithreading. The NUC 11 Extreme also impressed me when it came to transcoding a 4K video clip into 1080p. It managed to do that in 41 seconds, beating the speedy ROG Strix G15 by 6 seconds.

I'm mainly focusing on CPU-bound benchmarks, because the NUC 11's graphics scores will ultimately depend on the GPU you plug into it. But I couldn't review a gaming PC without actually playing some games, could I? I'm happy to report that it reached 150 fps to 160 fps in Overwatch with epic graphics settings at my ultrawide monitor's native resolution (3,440 by 1,440 pixels). I was even able to get Control running in 1440p between 60 and 70 fps with medium ray tracing settings and graphics set to high. (Thanks to a healthy DLSS assist, of course.)

Basically, the NUC 11 Extreme does everything I expect it an RTX 3060-equipped gaming desktop to do. And despite the tight quarters, temperatures didn't suffer much either. The GPU never went above 75 celsius while gaming, and the CPU stayed under 80 celsius as well. The fans were noticeable under load, but they were never as whiny as the ones you'd find on some gaming laptops. (Larger fans can push more air without making as much noise, naturally.)

This being the ultimate DIY PC kit, I also had to tear it open to see just how modular it actually was. The side panels came off easily enough, but I had to spend a few minutes prodding the NUC to make its top panel flip over. That revealed its innards, but I still had to lift up the rear panel to remove the screws securing the Compute Element, its plastic blower, and the GPU. It took around 10 more minutes to fully disassemble the system.

The entire process felt easier than on the NUC 9 Extreme, simply because there was more room to work with. But it's still not completely intuitive. I also accidentally tore apart the fan temperature sensors attached to the Compute Element, because a mere tug split them in half. If you've built PCs before, you should be able to intuit all of the cables and PCIe release levers you need to find. But I'd recommend taking some photos of all of the tiny wires connected to the Compute Element, because it's easy to mistake where they go and genuinely tough to plug them back in.

The Compute Element card was similar to the one I held last year, except now there's a bigger fan and a beefier heatsink. Given the small workable space, I was also interested in seeing how more powerful GPUs would fit into the NUC 11. NVIDIA's massive RTX 3070 Ti and 3080 had no trouble fitting, and the Radeon RX 6800 dropped in just fine too. The bulkier RX 6800 XT was a no-go, unfortunately. Its heat sink was just a bit too large to fit in properly. Intel says the NUC 11 Extreme should fit GPUs up to 12 inches long, but be wary if you're planning to use anything with a bulky heatsink.

I'll admit, I was surprised that this NUC could actually fit some of the fastest graphics cards on the market. That makes it far more useful than the last model, which was limited to shorter 8-inch long GPUs. Now, you can have a NUC that could genuinely offer most of the speed you'd get with a full-sized desktop. Or maybe you just want a secondary computer to power your game streaming. Based on what I've seen, the NUC 11 Extreme can handle most anything.

But, it's still very expensive. Intel expects the Core i7 and i9 models to be priced between $1,150 and $1,350. (It's nixed plans for an i5 model.) You can also get the Compute Elements separately between $780 and $980 — a lot to pay for a card that's essential a cradle for CPUs that cost half the price. And, once again, you'll also have to shell out for all of the additional hardware and software you need for a Windows PC. All told, you can expect to pay at least another $1,000 if you want 16GB of RAM, 1TB of NVMe SSD storage and a decent GPU.

That may sound ridiculous, but keep in mind the Core i9 NUC 9 Extreme kit started at $1,639 last year. I couldn't fathom why anyone would pay out the nose for a compromised desktop that couldn't fit a full-sized GPU. But the NUC 11 Extreme fixes those issues, and it includes a far faster CPU. If all of this sounds too extreme, you can always consider Mini-ITX case builds, but once again be prepared for pricey hardware and even tighter working quarters.

Intel's vision for a world where desktop computers can be both powerful and tiny is slowly coming into focus. Now, with the NUC 11 Extreme, Intel finally has a beefy miniature PC that I could actually recommend (assuming you've got deep pockets).