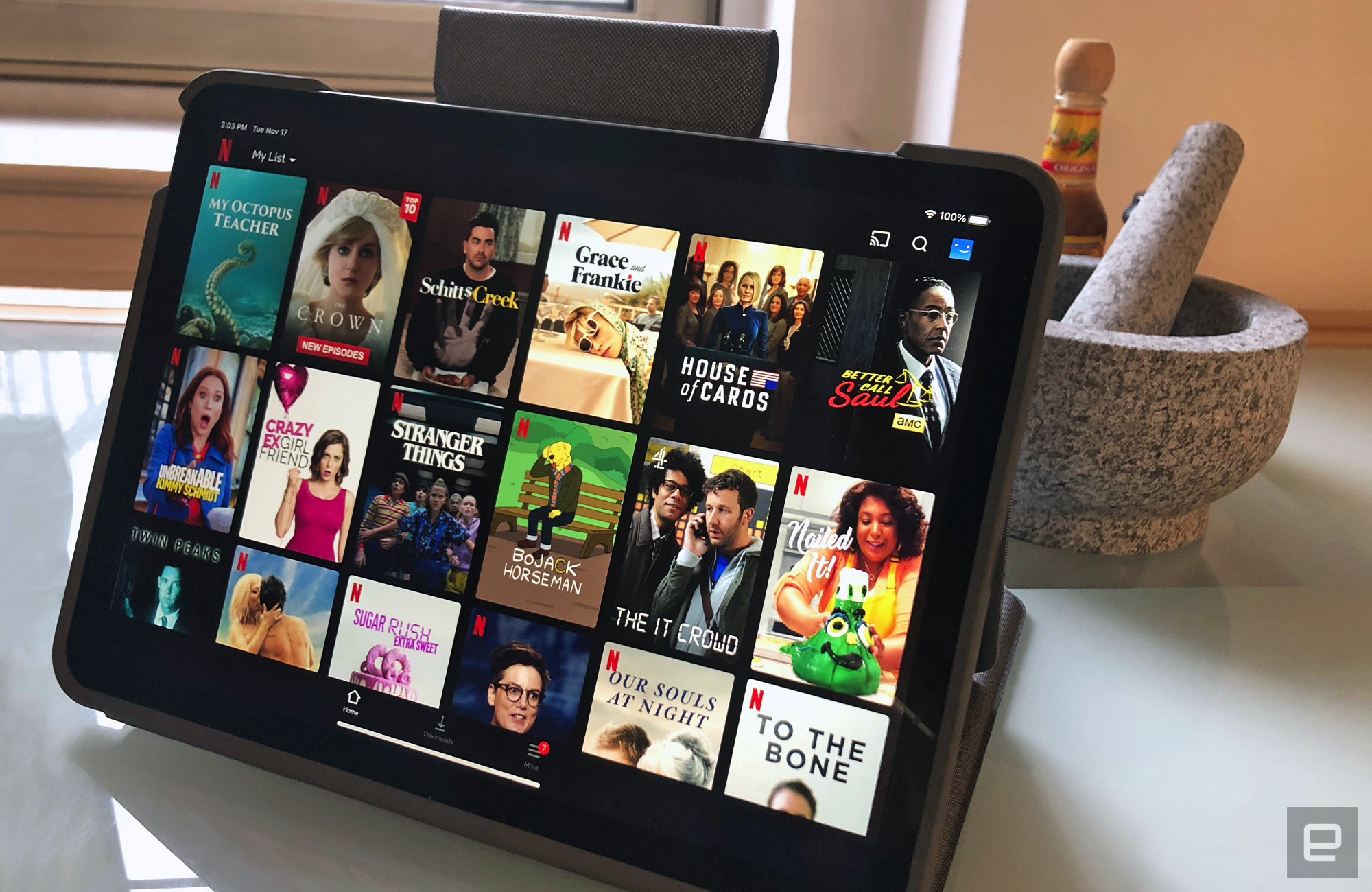 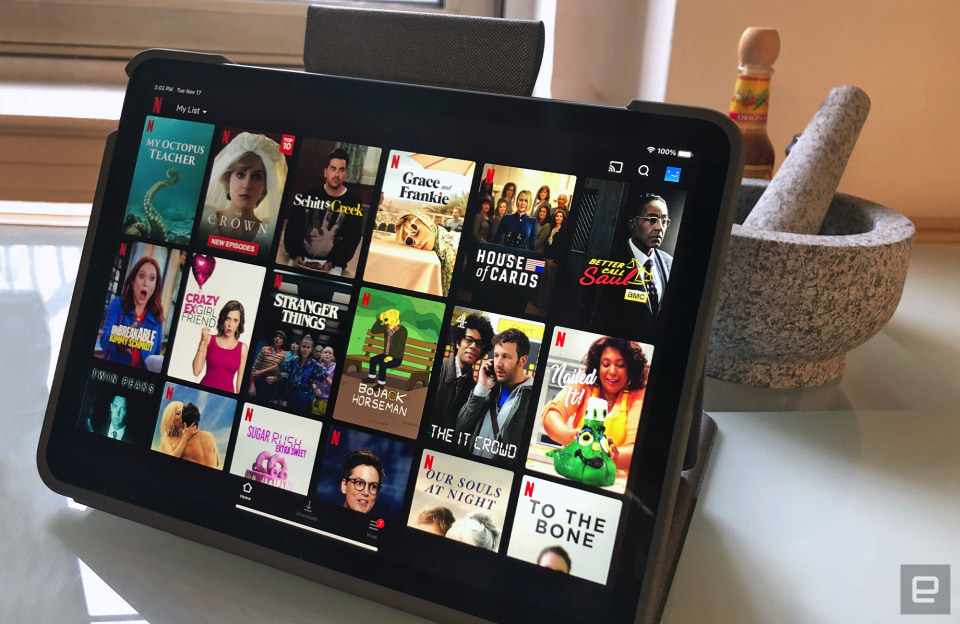 Last month I reviewed the fourth-gen iPad Air. Normally by now, I would have sent our loaner unit back to Apple. But my work isn’t quite done. Having tested the tablet itself, it’s time to move on to accessories. In addition to Apple’s own add-ons, from the Pencil to various folio cases, there’s a bevy of third-party options, some of them better (or at least better values) than what Apple has on offer.

I was particularly interested in trying Logitech’s new Folio Touch, which includes a trackpad and backlit keyboard, similar to what you’ll find on Apple’s own Magic Keyboard. Importantly, though, where Apple’s keyboard costs an eye-watering $299, Logitech’s alternative sells for $160. It even has a few features that Apple doesn’t, including more screen angles, a rubber casing protecting the sides and a dedicated row for shortcut keys. I recommend it, particularly for gift givers trying to stick to a budget. But it’s not my favorite for typing, especially in my lap. 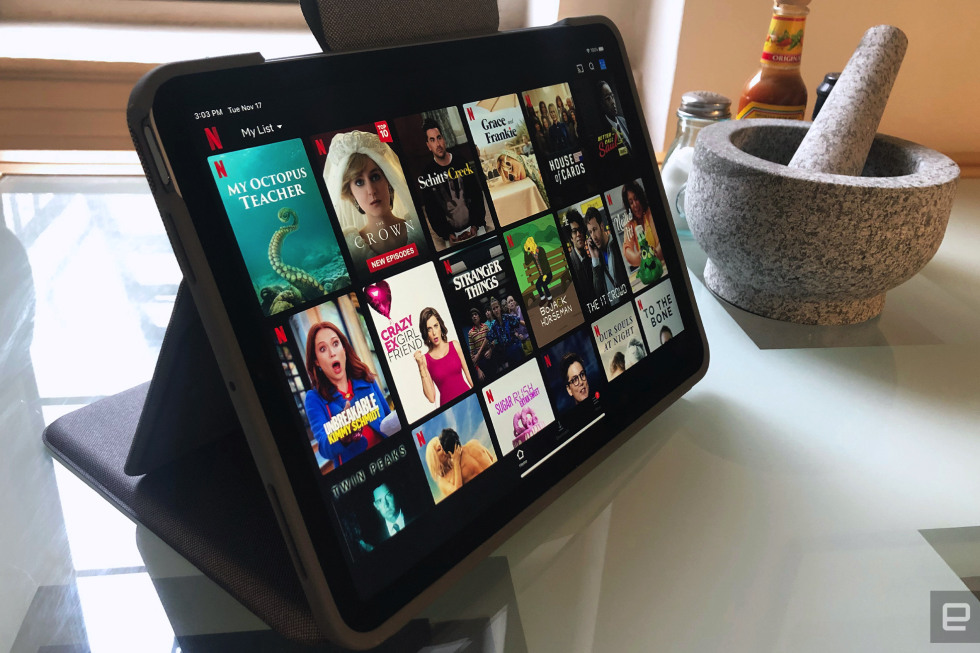 The Folio Touch makes a strong first impression, with a soft, tweed-like fabric finish, available in Oxford Grey or a darker color called Graphite. In addition to being pretty, I’ve already noticed it stays cleaner than Apple’s Magic Keyboard, whose silicone surfaces pick up fingerprints and smudges even when you think you’re being gentle with it.

As mentioned earlier, the Folio Touch has dense rubber bumpers, which cover everything except the lock button, which you’ll need for Touch ID logins, and the top edge where the Apple Pencil magnetically attaches. The Air’s stereo speakers and USB-C port remain exposed, though the rubber bumper is thick enough that all of those openings would be safe in the event of a drop.

Somehow, despite the heavy-duty rubber, this thicker case doesn’t feel that much heavier than Apple’s offering. The main downside is that the rubber enclosure is trickier to slip on and off. With any other Smart Connector accessory, you’d just pull and the tablet would snap off from the three magnetic pins.

Around back there’s a somewhat adjustable kickstand, and on top you’ll notice a loop that can fit Logitech’s optional Crayon accessory (an alternative to the Pencil). That strip of material can also unfurl to turn into a magnetic closure when the folio is shut like a book. For those of us who don’t own the Crayon, it’s easy enough to tuck the loop back into itself so that it’s not obscuring the screen while you’re typing.

I alluded to this early on, but it doesn’t feel like the Folio Touch was designed to be used in one’s lap — the skinny kickstand felt a little precarious balanced on my legs, and it’s quite top heavy. Even once you stabilize everything, the screen sits upright at an awkward angle. I prefer Apple’s approach, which eschews the kickstand entirely. The Magic Keyboard’s flat underside rests comfortably against your legs, while a crease in the folio allows you to tilt the screen forward and back to suit your needs.

At least the Folio Touch is comfortable for desk typing. The buttons provide a surprising amount of depth, with springy feedback and no issues like double presses. I will say that with extended use (e.g., editing back-to-back iPhone reviews in Google Docs), I started to notice a few too many instances of stuck keys. Input lag meant I was often several words ahead in my mind before realizing I had to pause, back up, and correct any typos.

Side by side, Logitech’s keyboard is also louder than Apple’s, though the typing experience is good in both cases. You can’t go wrong if easy touch typing is the priority.

The buttons’ backlighting kicks in automatically, and that shortcut row will come in handy if you want to do things like adjust the screen brightness or volume or control media playback. There are also some iOS-specific shortcuts, like a search button that does the same thing as hitting CMD-spacebar. These are mostly useful, though beware the lock key in the upper-right corner — too often, I hit that instead of the Delete button, causing the screen to lock up while I was in the midst of typing.

As for the touchpad, it’s about the same size as what you’ll find on the Magic Keyboard, and responds to the same multitouch gestures, like swiping up with three fingers to see all your open apps and swiping with two-fingers to close any of those thumbnails. The touchpad also worked well for single-finger tracking. Many apps support pointing and clicking, though you’ll have to press down with each “left click” — there is no option in iPadOS settings for tap to click.

Other than like a laptop — what Logitech calls “Type” mode — the Folio Touch can be used in three other positions. There’s “View,” where you flip the keyboard back so that you’re just looking at the screen. (Lenovo has been offering this on its Yoga laptops for years, as Stand mode.) There’s also “Sketch,” where you allow the tablet to lie at an almost-flat angle. And, of course, “Read” is what happens when you fold the keyboard around, like a book cover, leaving just a tablet in your hand. Apple’s Magic Keyboard can do none of these things.

In practice, the Folio Touch balances better in your lap in either Sketch or View mode than it does a laptop-style keyboard. I watched eight straight episodes of GLOW with the tablet balanced on either my lap, or sitting up in bed with the device resting on my legs. I guess I was comfortable enough, if I stayed that way for over four hours of binge-watching. That said, I wouldn’t recommend watching a movie in your lap with this thing if there’s a flat surface available.

In Read mode, meanwhile, the physical keyboard automatically shuts off when it’s flipped back, so you don’t have to worry about accidental key presses. Even so, feeling keys beneath your fingertips is an odd sensation. (I said the same thing about Lenovo’s Yoga laptops, way back in the day.)

Anyway, should you buy this thing? If you can’t stomach Apple’s $299 asking price for the Magic Keyboard, but still want a physical keyboard — yes. And if you want more than just a folio keyboard — ditto. Also: if you want a keyboard that doubles as a protective case. All good reasons. But if money is no object, and you aren’t going to buy Logitech’s Crayon accessory, and you want the best possible typing experience above all else, bite the bullet and spend your money with Apple.

In this article: Folio Touch, Logitech, review, gear
All products recommended by Engadget are selected by our editorial team, independent of our parent company. Some of our stories include affiliate links. If you buy something through one of these links, we may earn an affiliate commission.