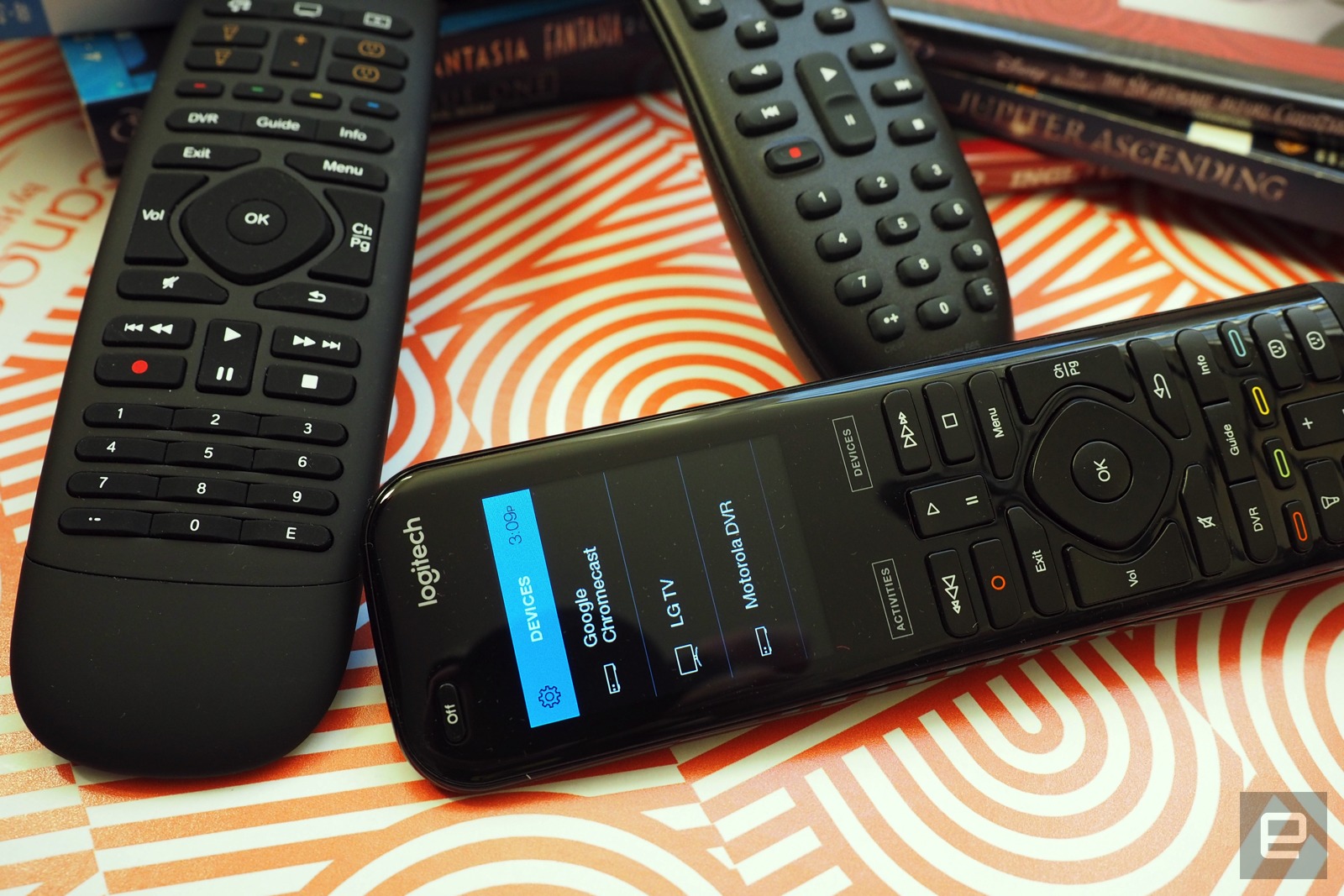 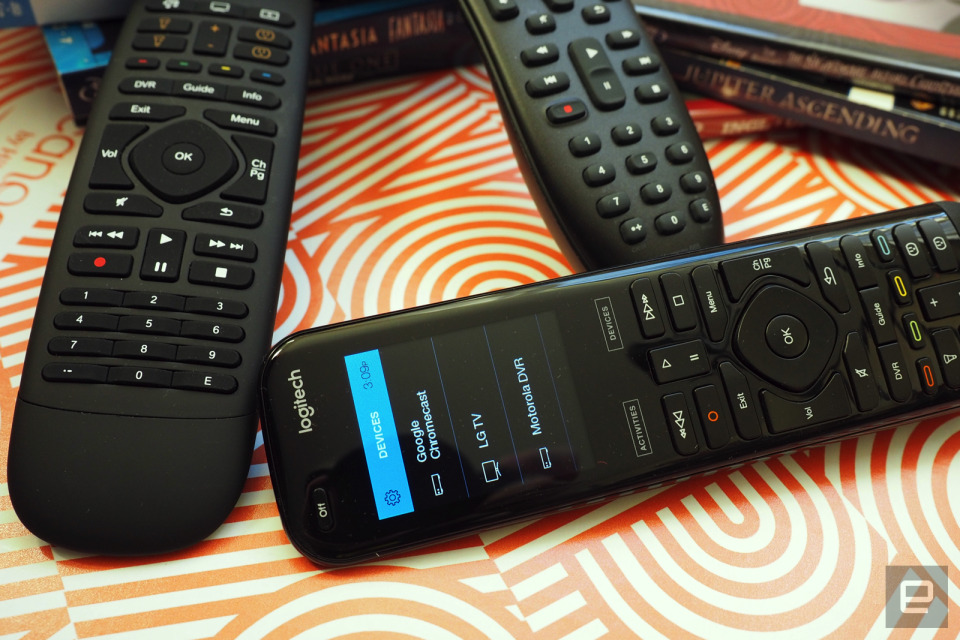 When I was a kid there were two devices attached to the television in my family’s living room: a VCR and a cable box. And we had a universal remote to tie it all together. These days, the amount of gear in my home theater is far greater and it’s all more complicated, including a Roku, Chromecast, Nintendo Switch and a PlayStation 4 Pro, plus a Motorola-made cable box. And that’s before you even get into my LG TV’s apps, or the smart speakers. And yet, universal remotes haven’t really kept up with the pace. Search any retailer and you’re bound to be deluged with generic or no-name options, most of which can only handle three devices at best. The few standouts come from Logitech — and they’ll cost you a pretty penny.

To save you the trouble of finding out the hard way, I decided to give Logitech’s remote lineup a try, as well as another model from Sideclick. (Another brand you might see is Sevenhugs, but we didn’t end up including it in this roundup.) In the end, I found myself reaching for my regular remotes more than I should have, but let’s delve into what did work and what really needed to be better.

The cheapest remote Logitech currently offers is the Harmony 665, a $60 device that the company claims can control up to 10 devices. There’s a 1.5-inch color LCD screen toward the top, which automatically turns on when you pick up the remote. On the screen you can toggle between controlling individual devices, or a suite of devices grouped under activities like “watch TV” or “listen to music.” Basically, when you want to do a particular thing, you can push a single button to have the remote turn on every single product associated with that activity, like the TV and cable box when you’re going to watch a show. It’s actually a really nice feature offered across the entire Harmony line.

Unfortunately, that’s where I hit my first snag with the 665, and it was a doozy. Unlike Logitech’s more advanced remotes, the 665 is IR based, so all setup has to be done by plugging it into a computer via USB. You install the (incredibly dated) Harmony software on your system and set up an account, and then it guides you through the process of adding your devices. This part is easy enough. Simply type the companies and model names or numbers of your various TVs and set-top boxes and the software will program them into the remote.

The next step is to set up the activities. It was here that the software froze up, not letting me go any further. I closed it and restarted to no avail, rebooted the computer, and even uninstalled and reinstalled the software completely. Nothing changed and, if I unplugged the remote and tried to use it, it would simply display the USB icon that indicated it needed to be connected to my computer to complete setup.

Later on I was able to get the 665 to function… after adding a completely different remote to my Logitech account. The Harmony 665 then appeared and functioned as normal. This obviously isn’t a real fix if you have to buy more remotes just to get one to work.

The 665 worked at that point, but I didn’t love it. The buttons are rather small (especially the power button up top, which is a 3/16-inch square) and it’s a little too easy to fat-finger the controls. Despite needing to be plugged in to a computer to be programmed, the control itself does not run on a rechargeable battery. Granted, remotes are low-power devices and a pair of AA batteries should last a long time, but it just feels silly.

The next step up is the Harmony Hub, a $100 device that lets you control your various devices via your phone. The Hub is also included with the Harmony Companion and the Harmony Elite, which is how I got to try it out. It’s basically a black saucer-like object that lives near your home theater where it can send infrared signals to all your devices. Mine sits below my TV and can reach the cable box several shelves below it. It does need to be plugged in to AC power to work, so make sure you have a free outlet.

The Harmony app is free and easy to use. For your IR-based devices you enter the manufacturer and product number and the software automatically sets them up. There’s also an option to scan your WiFi network for devices, which is how I got my Chromecast on board. The Harmony Hub also works with game consoles via Bluetooth, so I was able to set an activity to “play games” where a tap in the app can turn on my TV and set it to the proper HDMI input, while also powering on the PS4. The app emulates the buttons as well, so you don’t need to dig out your DualShock just to hit the PS or other controller-specific buttons. It was pretty cool to watch the controller navigate through the PlayStation’s menus to shut it down when I was done for the night.

It’s a handy tool, but the biggest downside is that you need to use your phone to control everything. This means unlocking your device even for basic functions like adjusting the volume or changing the channel. It’s also not useful to anyone who doesn’t have the Harmony app already installed on their phone, so your guests will have to rely on you if they’re trying to watch a little TV when they’re visiting. This sort of goes against one of the main reasons to get a universal remote in the first place: to make it easier for people to use your home theater, instead of staring at a pile of controls on the coffee table and wondering which is the right one.

Pros: Incredibly easy setup, app is extremely intuitive
Cons: You have to use your phone to do everything

For those people who don’t have the app, or for those times when you don’t want to use your phone, the Harmony Companion is a better choice. It’s a set containing the Harmony Hub but also a sleek companion remote containing most of the basic functions you’ll need in a pinch like volume and channel control, but also some convenient shortcut buttons for activities like watching TV or listening to music. There are even five buttons marked for smart home functions, with two for lights and two for plugs, and a plus-minus toggle in the middle.

The Companion remote is coated in a soft-touch rubber which feels nice, but it’s going to get extremely gross after months of greasy fingers. The remote takes a single coin cell battery, and I just now realized I don’t know how to replace it as there’s no hook or notch on the battery cover. This sleekly styled remote is perhaps a little too sleek.

Pros: Backup remote means you don’t always have to pull out your phone
Cons: Controls were occasionally sluggish or non-responsive, tactile coating is going to get nasty after weeks of use

I did not test the Harmony 950, which is a $250 infrared remote that uses the same desktop software as the 665 for setup. Aside from that, it’s nearly identical in build to the remote included with the Harmony Elite set I reviewed. For $350 you get both the remote and a Harmony Hub, which makes it far more capable as a universal remote setup. It’s even compatible with Alexa and Google Assistant, though I wasn’t able to get the latter working properly. Both Google and Harmony would tell me that the action was retired and that I should switch to the “blue icon,” despite the fact that that’s the one I tried (because it’s only one available).

Aside from that annoying setup snag, everything else with the Harmony Elite has gone swimmingly. The remote itself is a nice piece of equipment, with a soft-touch back and a glossy front that should be easy to wipe down after your sticky paws have been all over it. The buttons are satisfyingly big. It’s also rechargeable, with a disc-shaped base station that doubles as a stand, so you’ll have somewhere to put it when you’re done (and are thus less likely to lose the remote). It’s going to need to be plugged in regularly as the Elite draws way more power than your usual control due to its touchscreen and haptic feedback.

Two touch panels let you switch between “activities” and “devices,” and you simply select what you need on the screen. Out of the three Harmony remotes I tried it was the one I found the most reliable and the easiest to use, thanks to an intuitive layout that puts the most important buttons like volume, channel and the directional pad right under your thumb. The touchscreen also means that it’s far easier for the device to replace device-specific functions like the Home button on my LG set instead of, say, programming a generic button to do the same and then trying to remember which one it was. On the screen, I simply tap on the little house icon.

Still, it’s expensive — perhaps even more so than some of the devices you’re controlling with the remote. The system can also be a bit sluggish, since everything has to be routed through the Hub. And then there are occasional snags where something might not turn on properly, forcing you to re-sync your Harmony unit, or even track down the original remote. These problems have largely abated over time, so it might simply be a matter of needing time to adjust.

Pros: Easy to setup and use, feels great in hand
Cons: Expensive, voice control is iffy

On the opposite end of the spectrum are the Sideclick remotes. These aren’t complete universal remotes as they can really only replace one control. The idea is that if you do most of your viewing on a device like an Apple TV, Roku or Fire TV, they can add additional functions like channel changing. It’s basically a skinny strip that you snap on to the side of your existing control, and for that reason alone I can’t recommend it because it feels horrible.

The Apple and Roku remotes in particular are designed to be sleek and compact, and the Sideclick attachment just completely throws that out the window. It takes a bit of padding to get a perfect fit and, once attached, the entire thing is just too wide in the hand, with the indentation where the two remotes join together feeling particularly unpleasant. The setup is easy, at least, more so than the Harmony remotes, but that’s because it does so much less. Only buy one if you have larger hands and fewer devices.

In this article: roku, logitech harmony, harmony, a/v, sideclick, home automation, tv, universal remote, remotes, television, smart home, logitech, televisions, remote, home theater, remote controls, thebuyersguide, remote control, universal remotes, feature, gear, entertainment
All products recommended by Engadget are selected by our editorial team, independent of our parent company. Some of our stories include affiliate links. If you buy something through one of these links, we may earn an affiliate commission.