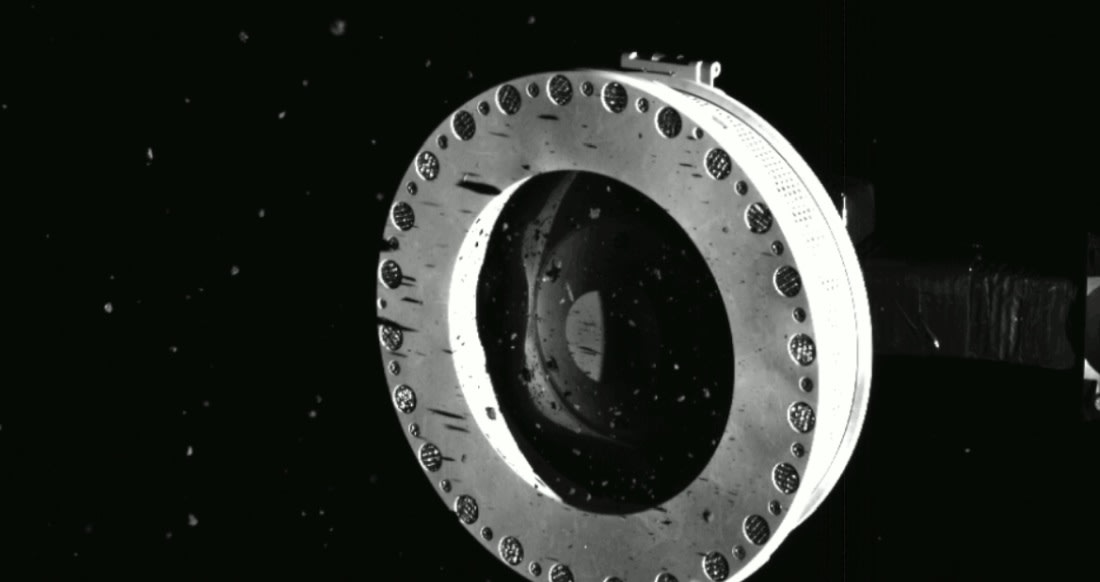 Earlier this week the OSIRIS-REx spacecraft reached out and took a small bite from the asteroid Bennu. Now the team behind the spacecraft reports they may have been a little too successful. Their goal was to grab at least 60 grams of its surface material, and that appears to have been accomplished — and then some.

The downside right now is that after looking at the images, some particles appear to be escaping the collection device, called the Touch-And-Go Sample Acquisition Mechanism (TAGSAM). It’s possible that larger rocks have kept a mylar flap wedged open, letting smaller pieces fly out.

The mission has canceled tomorrow’s Sample Mass Measurement to protect the sample and is now on course to stow the sample as soon as possible. The spacecraft remains in good health and the mission is confident that the spacecraft has collected more than 60 grams of material. pic.twitter.com/hABL4n3JYN

NASA associate administrator Thomas Zurbuchen said in a statement that “although we may have to move more quickly to stow the sample, it’s not a bad problem to have. We are so excited to see what appears to be an abundant sample that will inspire science for decades beyond this historic moment.” Dante Lauretta leads the science team and said “The loss of mass is of concern to me, so I’m strongly encouraging the team to stow this precious sample as quickly as possible.”

Based on the data, they believe the head has “much more than 2 ounces of regolith,” and they’ve adjusted their plans in order to stow it away as quickly as possible. A planned measurement that would’ve spun the sampling arm to help determine the mass of the sample has been canceled, as well as a braking burn for the craft.

In this article: TAGSAM, bennu, asteroid, OSIRIS-REX, NASA, news, gear
All products recommended by Engadget are selected by our editorial team, independent of our parent company. Some of our stories include affiliate links. If you buy something through one of these links, we may earn an affiliate commission.