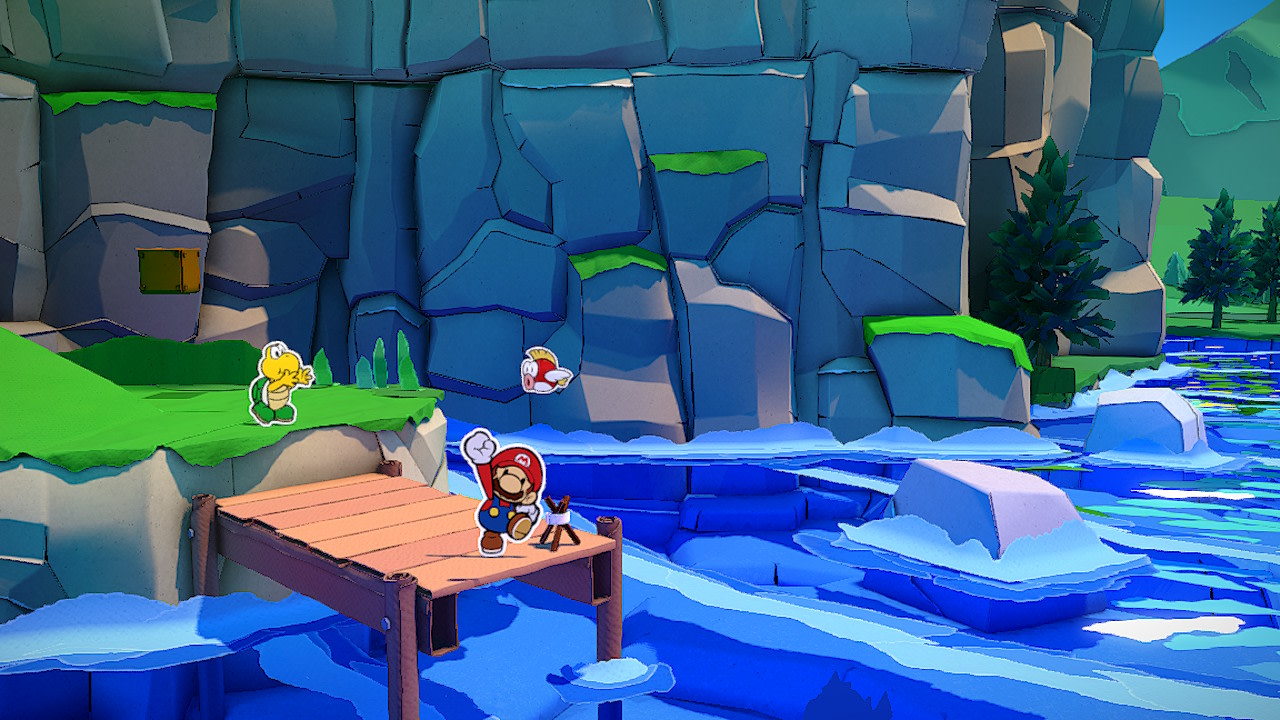 There’s fishing in Paper Mario: The Origami King. In at least one instance, Mario — paper-thin and outlined in white like a Lisa Frank sticker — can stop at the edge of a secluded dock, cast a line and wait for the shadows beneath the waves to bite. It’s a moment of relaxation after hours of fighting origami Shy Guys and saving squished Toads, using the Switch’s motion controls to flick out the pole and reel in a catch. There’s one large, bulbous fish in the bay, swimming among the smaller shadows and begging to be caught. When the big fish finally takes the bait, it pops out of the water in a flourish of 3D animation, and a battle begins. So much for relaxation, Mario.

This is the big difference between fishing in The Origami King and Nintendo’s other huge title in 2020, Animal Crossing: New Horizons. Fishing is one of my favorite activities in New Horizons because it’s uniquely calming, especially when I have no actual goal in mind. It offers just enough activity to keep me engaged with the virtual world under my fingertips, while allowing my mind to focus on the podcast, album or reality show I’ve put on in the background. Maybe this is a symptom of a generational compulsion to always be multitasking, but I’m happiest playing New Horizons with something else soaking up my attention.

In The Origami King, fishing is more than a soothing activity that might result in new crafting recipes or tournament rankings. It’s a necessary gameplay mechanic that snaps smoothly into place during Mario’s epic quest to save the world (and Princess Peach, of course). It induces the same calmness as fishing in New Horizons, but it also provides a jolt of adrenaline and momentum for the story at hand. I still listen to podcasts while playing The Origami King, but I’m just as content focusing fully on the game and its densely packed mixed-media world.

Paper Mario: The Origami King has enough risk, strategy and adorableness to keep me intrigued, distractions be damned. This doesn’t mean it’s in any way better than New Horizons — but it does offer slightly more structure, a basic progression system, creative mechanics and truly tricky fighting scenes, while still presenting a sweet, approachable universe.

In short, The Origami King is the perfect adventure for New Horizons fans.

The core plot of The Origami King wouldn’t feel out of place in an episode of Doctor Who. Mario and his buddies arrive at Princess Peach’s castle to find the town deserted, and the princess herself looks odd. Her paper body has been contorted into an unnatural origami shell, and she speaks as if her soul is missing. She’s been transformed into a Folded Soldier by King Olly, a small dictator bent on destruction and control. He plans to turn the entire kingdom into Folded Soldiers, and he’s wrapped the castle in streamers in an attempt to keep Mario out until these plans are complete. Mario must travel to the lands attached to the ends of the streamers and unravel them before facing off against King Olly.

This dire plot is softened by the lighthearted, cartoonish nature of the Paper Mario series, but it still provides a clear impetus for players’ heroism. As Mario wanders the lands on a mission to save the world from being squashed, he encounters emblems that grant him special powers — for instance, the “1,000 Fold Arms” give Mario two long, bouncy limbs that he can use to peel layers off walls or grab objects that are otherwise out of reach.

The Origami King plays with the texture and malleability of paper in brilliant ways, mixing 3D animations and realism with 2D visuals. Mario’s journey spans a handful of large, unique maps that players can explore freely once they’re unlocked, complete with puzzles, secrets and lots of confetti.

Confetti is one of the main mechanics in The Origami King. Mario collects this magical stuff by smashing flowers, bushes and tree trunks with his hammer, and walking over the rainbow strips of paper that fall to the ground around him. A bag in the upper-lefthand corner of the screen glows red, yellow or green depending on how much confetti Mario has on-hand. This is important, because one of Mario’s tasks throughout the game is to paper over holes that have appeared in the landscape, revealing wire frames and unknowable depths below. Some of the holes are merely cosmetic, but many of them appear in locations that Mario has to walk over or otherwise interact with. When he successfully covers a hole in confetti, it glows white and makes an extremely pleasant womp noise.

I live for this noise. Even if the holes are cosmetic, I find it nearly impossible to pass one up without throwing fistfuls of confetti all over it. It’s incredibly satisfying, and Mario looks so pleased as he does it. Plus, it seems there are always sources of more confetti close by, so running out is more of a temporary inconvenience than a game-over situation.

Speaking of game over — The Origami King definitely has a fail state, and if you play, you will experience it. This is another feature that differentiates The Origami King from New Horizons, and it’s a driving force behind the game’s sweet tension.

Save cubes are scattered across The Origami King’s maps, but there are generally hordes of enemies, intriguing new storylines and a handful of riddles standing between Mario and salvation. If (When) Mario dies, he starts at the most recent save cube he’s hit, which could be a world away, if you get the timing exactly wrong. The stakes are high enough to make dying a true punishment here.

Most Mario deaths will likely occur in the game’s ring-based battle arena. When Mario encounters an origami enemy like a Goomba, Spiny or Shy Guy in the wild, he’s thrown into the center of a circular stadium surrounded by Toad cheerleaders. The battlefield is made up of four concentric rings, with individual spots for enemies to occupy.

Mario stands at the center of the circle and players rotate or slide the rings until the bad guys are grouped up to take the most damage possible (generally in a straight line or two-by-two square). There’s a timer on this section and a limit on the number of ring rotations players can make, adding a ton of pressure to each move. Mario then picks an appropriate weapon and attacks, with bonuses applied if players tap the jump button at the indicated times. There are also twists on this basic setup: In one iteration, Mario has to rotate rings emblazoned with arrows, items and attack moves in order to carve a path to a mini-boss or boss.

Ring-arena battles are the most tactically taxing portion of the game, and messing up in the positioning phase can spell doom. Players are able to block attacks from enemies in the arena, but Mario takes damage no matter what, and sometimes his health bar simply can’t hold out.

The “game over” screen transforms The Origami King from a carefree romp in the wilderness into an experience full of inherent risk. Much like in New Horizons, there are reasons to smile in basically every scene of The Origami King. But in this game, there’s an extra layer of tension — and therefore, a sweeter feeling of success when things work out.

New Horizons will arguably be the game that defined 2020, and it introduced a slew of new players to Nintendo’s vast universe. If these fresh players — and even seasoned veterans — want something just a little denser, with slightly higher stakes, The Origami King is ideal.

And if you do play The Origami King in-between planting tulips and trading furniture in New Horizons, feel free to spend some extra time at the end of the dock in the red-streamer world. Maybe catch a few of those little fish before going after the big boy. Take your time. Enjoy the moment.

And then roll up your overalls and fight.

In this article: Switch, Paper Mario The Origami King, animal crossing: new horizons, review, gaming
All products recommended by Engadget are selected by our editorial team, independent of our parent company. Some of our stories include affiliate links. If you buy something through one of these links, we may earn an affiliate commission.