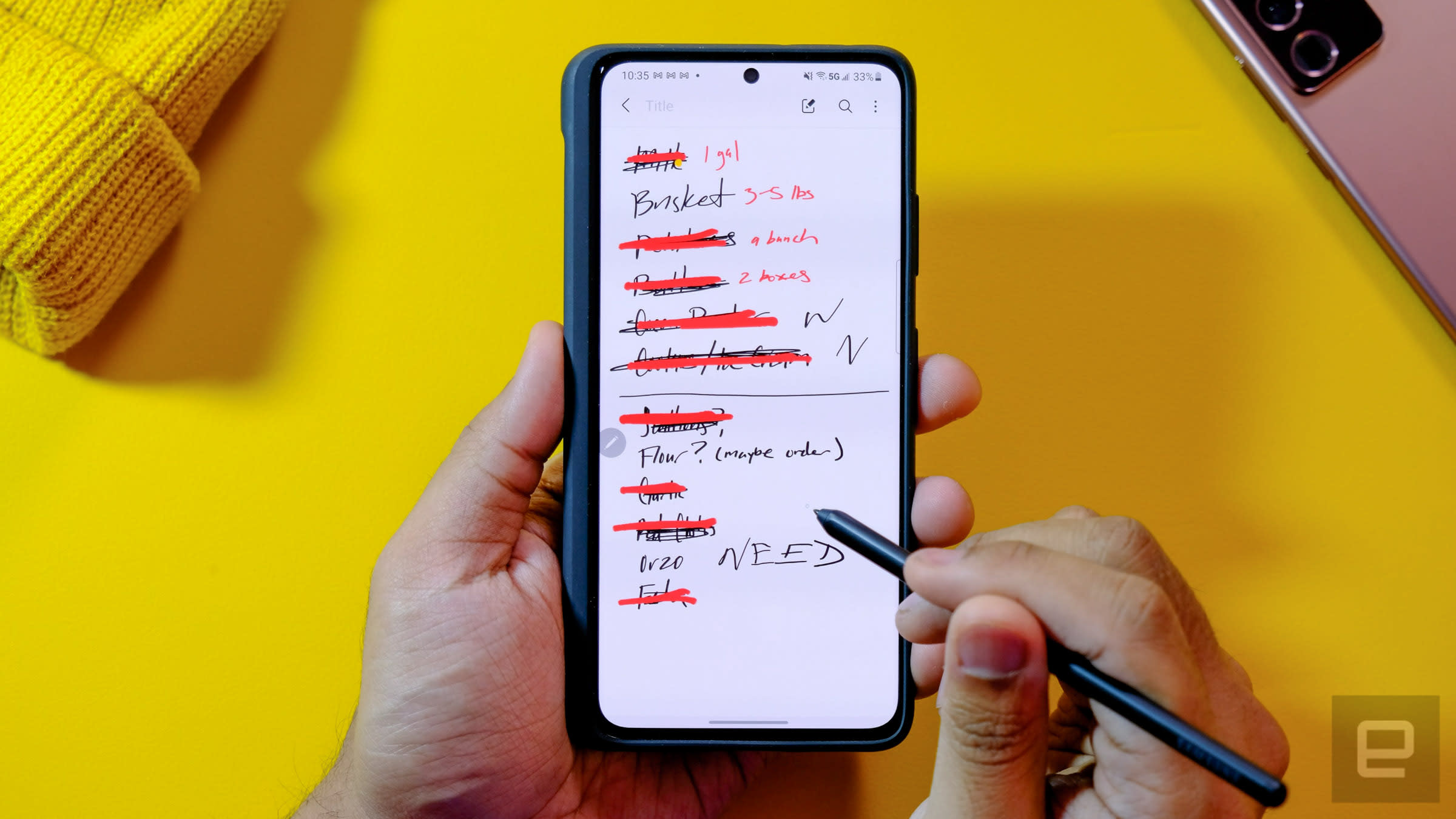 It's functional, but clumsy.

It seems more likely than ever that the Galaxy Note line as we know it is on its way out, and that's sure to be dire news for fans of the S Pen. Or will it? With the launch of this year's Galaxy S21 Ultra, Samsung is apparently trying to give its fan-favorite stylus a life of sorts beyond the Note — but you’ll have to find one yourself.

If you have an old Galaxy Note lying around, you’re golden — just pop that S Pen out and sketch away. If you don’t, you can buy a brand new one for $40 from Samsung, or shell out an extra $30 for a silicone case/S Pen bundle. That last option seems like the most comprehensive option because it gives Samsung’s stylus somewhere to live, but after living with it for a week… well, let’s say it’s been a mixed bag.

Mind you, that's not because of the S Pen itself. In fact, I actually really like this thing — it’s one of the most comfortable S Pens I've ever used. That comfort is all thanks to the S Pen's size. At just over four inches long, its heft and feel have more in common with a classic ballpoint than the diminutive stylus built into Samsung's Galaxy Note smartphones.

This $40 S Pen packs all of the requisite bits needed to play nice with the invisible Wacom digitizer inside the S21 Ultra's massive display. That obviously means you can write with it, but you can also hold the S Pen above the screen and tap its button to bring up a palette of handy options and shortcuts. It very much feels like the S Pen experience from the old days, which is fine if you're the type who mostly jots down quick reminders and grocery lists. (For other fun features like support for air gestures and camera control, you'll have to wait for the more expensive S Pen Pro coming later this year.)

The S Pen is also fast, which frankly came as a bit of a surprise. When I was working on our S21 Ultra review, I noted that stroke latency — that is, the lag between starting a stroke and seeing it on-screen — wasn't quite as low as on devices like the Note 20 Ultra. I wrote that after testing the S21 Ultra with a Lamy S Pen Samsung gave away after some launch event, but the issue seems to be gone with this first-party stylus. Our review unit hasn't received any software updates after publication, so I'm comfortable chalking up that discrepancy to the S Pen I was using.

If all you need to use the S Pen for is writing, you're in good shape here. That said, I'm a little hesitant to recommend it to artists. For the last few years, Galaxy Notes have been able to detect the angle at which the S Pen was being held to produce appropriately angled strokes. That still happens on the S21 Ultra with this somewhat less intelligent version of the S Pen, and from what I can tell, the effect works about as well here as it does on the Galaxy Note 20 Ultra. There are probably some edge cases here I'm not fully accounting for, but the experience still feels pretty close.

So, as I said, the S Pen itself isn't the problem here. It's the case that leaves me wanting. For one, it suffers from all the issues other silicone cases do — it's quick to pick up lint and dust, and clings to the inside of your pocket. That seems even more unavoidable here because of how damn big the S21 Ultra becomes when it's inside this case. It was already a little bigger and heavier than last year's S20 Ultra, but this case makes it even more unwieldy. I get that this was unavoidable — after all, the case has to house a physically larger S Pen all the time. Still, people accustomed to the Galaxy Note's easy-to-grip frame may find this package unwieldy.

It's also worth noting that, because of all the buttons on the S21 Ultra's right side, the S Pen slips into a slot on the case's left side. That's great news for lefties, but not so much for everyone else; I haven't been able to train myself to pull out the pen with my left hand yet, so using this stylus/case combo always requires an awkward little juggle. Thankfully, the S Pen is quite easy to pull out and reinsert when you're done.

Despite the case's heft, it feels surprisingly shoddy in some places. Most notably, the trim right around the charging port cutout feels very flimsy; I could definitely see it snagging on something and snapping when being pulled out of a bag. Unfortunately, at time of writing there are no other S21 Ultra cases available that also comfortably house the S Pen, so people looking to turn their new flagships into ersatz Galaxy Notes just have to make do.

In fairness, I'm not sure what Samsung could have done to make this package nicer to use — apart from picking better materials, that is. The S Pen's size demands an oversized case, and like I said, this is the only game in town right now for anyone who wants to use an S Pen with an S21 Ultra without losing it. Let's be clear, though: As pleasant as the S Pen can be, this stylus/case combo is nowhere near as thoughtful or as elegant as a proper Galaxy Note, and probably wouldn’t win over Samsung’s die-hards. For that reason alone, I hope Samsung doesn't kill off its line of power-user phablets completely — with any luck, that ship hasn't sailed just yet.