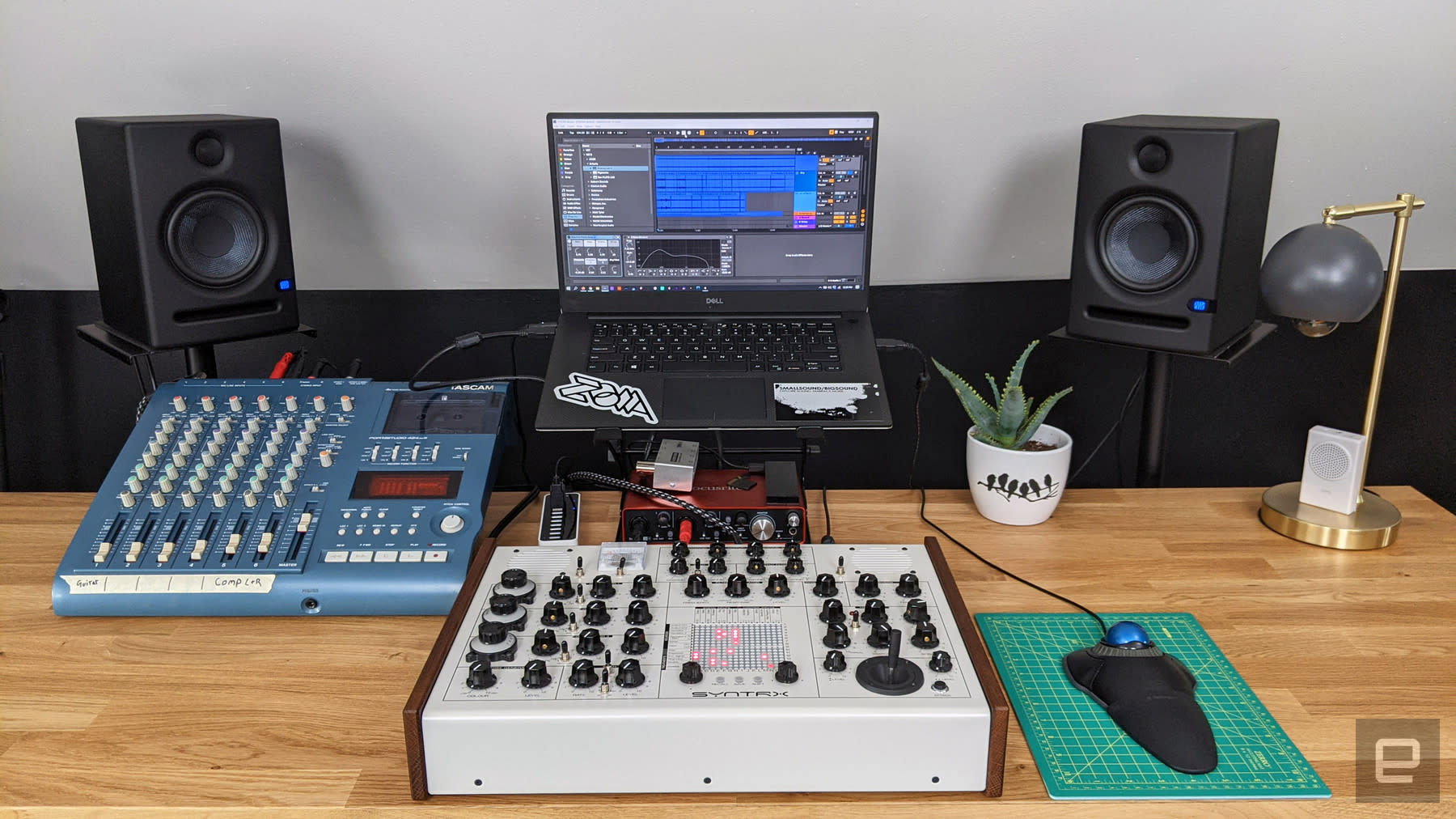 This modern take on the iconic Synthi A is pricey, impractical and amazing.

Sometimes I hate having to score reviews. A number can’t always capture the nuances of a reviewer’s opinion, or make clear who might want to buy something and why. Often practical considerations drag down a device’s score, regardless of an individual writer’s opinion. I’m explaining this because, well, Erica Synths’ SYNTRX is an incredibly impractical device. It’s an extremely niche analog synth with an experimental bent and a prohibitively high price of €2,500 (around $2,980). But, it’s also kind of amazing. I’m going to be sad to pack up my review unit and send it back. So, I won’t be scoring this review, because whether it gets a 75 or a 95 won’t tell you if the SYNTRX is worth buying. You’ll just have to read through to the end and decide for yourself.

Let’s start by making one thing clear about the SYNTRX: It is not, despite outward appearances, a clone of the EMS Synthi A (or AKS), famously used by Brian Eno and Pink Floyd. It is very much inspired by that classic and has many of the same features, but it isn’t an exact replica. That being said, if you’ve always wanted a Synthi, but can’t rationalize dropping $15,000 or more on one, this is a comparatively affordable alternative.

The most obvious thing the two have in common is a grid-like patch matrix with outputs labeled on the left and inputs across the top. On the AKS you had to physically connect patch points with a pin, but on the SYNTRX it’s all done digitally. Now, this grid style of virtual patching has its pros and cons. On the plus side, you don’t have to buy any patch cables, since all you’re doing is pressing buttons. You can also connect an output to multiple inputs, and vice versa, without any special cables.

On the downside, you can’t just plug in any other modular gear you have lying around. There are two ¼-inch CV inputs on the back (as opposed to the more common ⅛-inch used by eurorack), but they’re hardwired to control the pitch of oscillators one and two, respectively. There’s no way to directly assign their output to another module currently.

There are some workarounds here, and that’s kind of in keeping with the spirit of the SYNTRX. It’s not really a straightforward instrument. It wants you to explore, experiment and poke at its outer limits. You could feed CV to one of the oscillators, then use that oscillator to control something else, effectively sacrificing it in the name of modulation. But you could also get crazy and plug a drum machine into one of the two audio inputs and use that as a modulation source. Admittedly, the results can be quite odd, but not unmusical.

Even beyond the patch matrix, though, the SYNTRX and Synthi A have a lot in common. While the layout is ever-so-slightly different, the core features are almost the same. You have three oscillators, with two different wave shapes each, one of which is designed primarily as a sub oscillator or an LFO and has a much lower frequency range. There’s a noise generator, a resonant low pass filter, a ring modulation circuit, a spring reverb unit and a unique take on an envelope generator that both EMS and Erica Synths refer to as the trapezoid. Both also have built-in speakers, a mechanical VU meter and an assignable joystick for manually controlling parameters.

Again, with that much in common, you’d be forgiven for assuming this is a straight clone. But the SYNTRX does add some notable features. For one, modern amenities like presets and MIDI support. But Erica Synths added a feedback loop to the reverb and there’s a sample and hold circuit. You’ll also find a few more options for how the oscillators and the envelope generator function. For instance, oscillator one and two can be synced for easy unison sounds, or you can turn key tracking off on oscillator three to get a more consistent LFO. There’s also a three-octave switch on oscillator one to increase its range.

These might sound like minor changes, but they give the SYNTRX a much broader sound palette. And, while I don’t have an original Synthi A to compare it to, based on demo videos I’ve seen, the SYNTRX is a little more abrasive sounding. Not that you can’t smooth out its rough edges, but it’s definitely strongest when it comes to giant basses, slightly atonal pads and sci-fi bloops.

The bass tones in particular are huge. Oppressive even -- it sometimes sounds like the instrument is about to explode. The saturation from overdriving the filter is just fantastic and the oscillators themselves are rich sounding when combined. Even the ring mod circuit is surprisingly musical. Ring modulation has a reputation for being atonal and I’ve often heard it compared to a broken church bell. You can definitely push the SYNTRX’s ring mod circuit into those areas, but it’s a lot easier to get usable sounds out of it than you’d expect.

Same goes for the spring reverb. Generally, I do not care for spring reverb. It’s a perfectly fine effect when deployed properly, but bad spring reverb (and there’s a lot of bad spring reverb out there) sounds two-dimensional and toy-like. This one, on the other hand, is rich -- almost an instrument on it’s own. You can bang the side of the SYNTRX and hear the actual spring clanging around inside. And if you crank up the feedback it releases otherworldly moans and howls.

My only complaints, sound wise, are that the line between very subtle and overwhelming on the reverb mix is thin, and the two primary oscillators can sound a little flat individually. They really benefit from external effects, but, truth be told, most synths are better with some effects.

The SYNTRX is more than just a synthesizer; it’s also possible to use it as a sub mixer and as an effects processor. You can feed your voice through the ring modulator to imitate a Dalek or run a drum machine through the filter. And there are actually three filters: the voltage-controlled low-pass filter, and a pair of output filters on each channel for last-minute sound shaping. While you can definitely use the SYNTRX in stereo, more often than not I’ve used the second output to filter and overdrive a second instrument like a drum machine.

Because the SYNTRX has built-in speakers it’s also completely self-contained. You could, in theory, perform with just the SYNTRX and nothing else. Or connect two instruments to the inputs around the back (say, a drum machine and a second synth), and use it as both a mixer and an amplifier for a more fleshed-out setup. The speakers are pretty decent, too. They don’t quite capture the crushing lows that the SYNTRX is capable of, but they’re decently loud and clear -- slightly better than what you’d find inside a small smart speaker. So, definitely not studio quality and they wouldn’t stand up next to a live drummer, but you could probably get away with relying on them as the world’s oddest subway busker.

The joystick at the bottom is also worth paying attention to as it opens up a world of possibilities for manipulating sound. You can assign multiple parameters to each axis and then dial in their sensitivity independently. You can also attenuate the connections on the matrix in steps of 25, 50 and 75 percent by pressing the left navigation encoder, instead of the right (which just makes a 100-percent strength connection). This means you can put both the filter frequency and the decay on the X axis but have small controlled changes to the note length, while sweeping through the whole frequency spectrum.

We should also take a moment to talk about that patch matrix. You navigate around using the encoders below it in the same way you might draw on an Etch A Sketch. Except here you’re drawing connections in an electrical circuit, not a poor excuse for a house. The 16x16 grid is easy to master and it makes experimenting with various connections quick and accessible. While I could see someone being slightly concerned about what might happen if they connected two random jacks on a giant modular rack, it’s safe to assume that Erica Synths and their partners at Riga Technical University wouldn’t put anything on the front panel that posed a danger to the machine or the user.

The matrix is also how you manage presets. While it’s great to have a modern convenience like presets in this classically inspired machine, it’s not like pulling up that factory bass patch on your trusty MicroFreak. For one, you can’t save knob positions. The SYNTRX comes with a stack of overlay cards for taking patch notes, but only the matrix connections are recalled. And two, the presets are just dots on the grid. So you’ll have to remember that your self-playing sci-fi soundscape is D8, while your warbly lo-fi pad is G14. I’ve had the SYNTRX for roughly three weeks. In that time I’ve saved less than 20 presets and I’ve already forgotten which ones are which.

Lastly, the grid is the main feature limitation on the SYNTRX. I have a small wish list of things I’d have liked to have seen on the synth, and even Erica Synths’ founder Girts Ozolins said in an interview with me there were things he wished he could have added. But often those features were left out because Erica Synths was more or less limited to a 16x16 grid, which meant picking the 16 most important inputs and 16 most important outputs, and leaving it at that. So as much as I’d like to have seen assignable CV or a CV inverter, the realities of commercially available parts limited the company’s flexibility.

And I want to be clear, the company didn’t phone it in when it came to sourcing obscure or expensive parts. The SYNTRX’s price is so high because the components here are so good. The oscillator pitch knobs and pots are particularly exquisite and make manually tuning far less of a chore than it might otherwise be. But the rest of the knobs and all the switches are also immensely satisfying. This is, from a purely tactile standpoint, one of the finest instruments I’ve ever had the pleasure of using.

The physical joy of using the SYNTRX combined with its implicit encouragement of experimentation make it easy to get lost in. There’s a learning curve, but once you come to grips with the basics there’s no denying its charms. Almost every time I use it I discover something new. It joins an elite group of instruments I’ve reviewed (the Minilogue XD and Moog Subharmonicon being the other two) that immediately inspired me to build a new song around it.

But, the SYNTRX is clearly not for the casual noodler. You need to be serious about your craft to drop almost $3,000 on an instrument. And more than many other synths I’ve reviewed, it’s going to take a lot of time and dedication to master. However, it’s also a unique device that more experimentally minded musicians will undoubtedly find quite alluring.