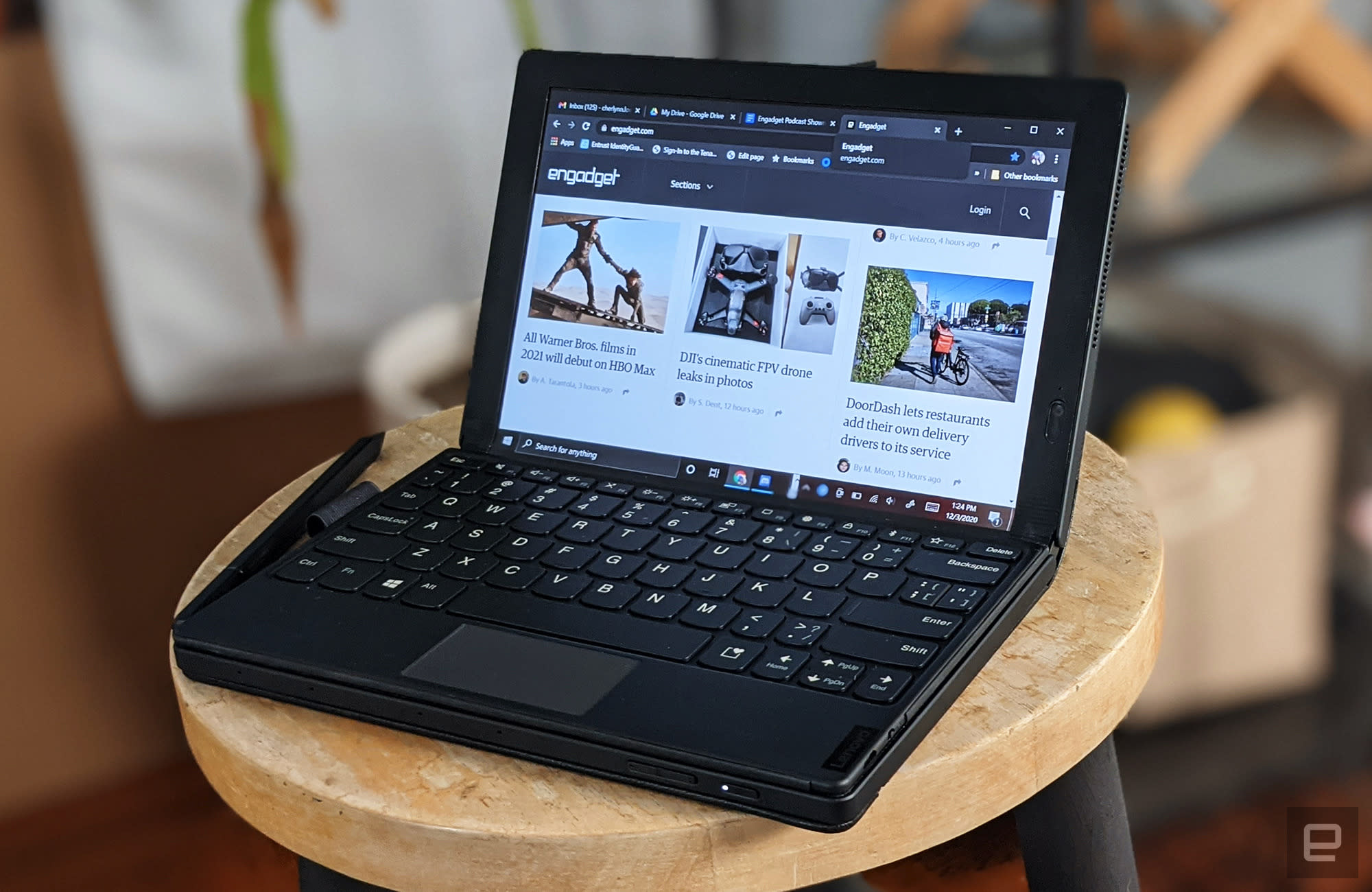 Lenovo is no stranger to making weird things. In 2016, the company gave us the first dual-screen hybrid with the Yoga Book that was part color tablet, part e-ink touchscreen keyboard / drawing pad. It followed that up with a second-generation in 2018, but also gave us things like tablets with fold-out kickstands and laptops with speakers built into the hinge or an e-ink screen on the lid. Not to mention that Lenovo pioneered the 360-degree hinge system and was the first to announce a 5G laptop with Qualcomm in 2019.

So it shouldn’t be surprising that the company is the first to deliver a foldable tablet PC that you can actually buy. We saw a prototype of the ThinkPad X1 Fold last year and got all the specs at CES 2020, and now it’s finally hitting shelves for $2,600 to start. For that price, you’re not just getting a large foldable phone. In addition to the fact that it runs Windows, the 13.3-inch X1 Fold also acts as a mini laptop when it’s folded halfway and you add Lenovo’s companion keyboard. If it was well-executed, Lenovo’s first foldable PC could have been better than a regular laptop, and not simply jumping on a hot trend. The problem with the X1 Fold, though, is that the execution needs work.

Like the Surface Duo I reviewed earlier this year, the X1 Fold is a unique device. Yes, it's a big foldable and we've seen and tested a few foldable phones by now so the technology doesn't feel quite as novel. But Lenovo's device is the first that's this large and runs Windows, making it basically a foldable Surface tablet. Because of its flexible screen and sturdy hinge, the X1 Fold can be used in a number of orientations similar to the Surface Duo and the Galaxy Z Fold 2, like book or laptop. But because the hinge only opens to 180 degrees, you won't be able to rotate it all the way over into a tent mode.

As a tablet or book

For the $2,600 starting price, you'll only get the X1 Fold itself without a keyboard or stylus, meaning you’ll largely be using it as a tablet or "book". It's a serviceable device and is surprisingly well made. I like the leather cover that not only makes this feel like a real (if hefty) notebook, but also adds a touch of class. On the top bezel sits a 5-megapixel webcam, while power and volume buttons line the right edge. There's also a pair of USB-C ports, one on the left side and the other on the bottom.

With a 13.3-inch screen the Fold is quite large for a tablet, and it certainly feels chunkier than the iPad Pro or Samsung's Galaxy Tab S7+. It weighs 2.2 pounds and has a 11.5mm profile, and when folded it's about 24mm thick. All that heft makes this difficult to maneuver with one hand, and I struggled to open the Fold while holding a camera with my other hand.

When you close the X1 Fold, it magnetically snaps shut and there's a tiny gap near the hinge. That comes in handy when you need some leverage to pry the device open, because the magnets holding it together are quite strong. Once you get the screen moving though, the hinge springs open. It starts getting more resistant when you push it beyond a 25 degree angle and you can bend the screen so it's half closed and stays that way.

In this orientation, you can hold the X1 Fold as if it were a book and run two apps side by side to drag and drop between them or just to keep an eye on Twitter while watching YouTube. Or you could also set the Fold up on the kickstand built into its leather case and have a second screen or just to watch Netflix on. The 2K OLED screen here is bright and colorful, and although there is a small crease in the middle, it’s not very obvious… when the screen is flat at least. When the display is bent though, the dent in the middle is significantly brighter than the rest of the panel, and makes viewing anything full screen a bit jarring.

My main frustration with using the Fold as a tablet is that Windows is still an atrocious touch-based operating system. We’ve known this for a long time -- Microsoft’s many public embarrassments with mobile versions of Windows have proven this point time and time again.

Honestly, it was downright infuriating to use Tablet Mode on the X1 Fold, especially when I just wanted to go back to the desktop to find a file I saved. Trying to drag and drop windows didn’t behave the way I expected it to, not to mention Microsoft’s app store is pitifully bare compared to Apple and Google’s options. There still isn’t an official Kindle app, for example.

Obviously book mode is best for reading (or it would be if there was a real Kindle app). But it’s also pretty good for writing and taking notes. Lenovo’s $100 pen is responsive and smooth, though I prefer Microsoft or Samsung’s options.

To its credit, Lenovo tried to make it easier to use the Fold in Book mode by adding its own mode-switching software. By tapping an icon in the system indicator tray, you can quickly expand an app to take up the whole screen or snap two apps side by side. This did make it easier to launch, say, YouTube and Twitter next to each other, but aside from a few very niche scenarios I struggled to find a reason to actually use book mode.

As a mini laptop

Throw in Lenovo’s $230 companion keyboard, though, and the X1 Fold presents a far more compelling case (if you forget about the price). Of course, you can use your own keyboard, but the company’s version not only fits perfectly in the gap between the two halves of the screen and magnetically stays in place, but also charges wirelessly when it’s stowed in the closed tablet.

With this setup, you get a cute little mini laptop with a 7-inch-ish screen that’s perfect for getting work done when you’re in a tight space. The buttons on this understandably small keyboard offer an impressive amount of travel and space, all things considered.

But tradeoffs had to be made to squeeze all those keys onto something this small, so some buttons like the dash and equal signs at the end of the row of number keys had to be sacrificed. It also had to move the apostrophe from where it normally is next to the Enter key to slightly higher and farther to the right, between the Backspace and Enter instead. These changes took a bit of adjusting to and made typing a little awkward. It’s fine for a quick email or tweet, but I wouldn’t want to type on this for hours.

I do appreciate that Lenovo included a trackpad on the keyboard, even if it is pretty small at 3 inches wide and 1.5 inches tall. While it isn’t the most responsive touchpad around, I was thankful for a way to use the cursor on Windows, as well as multi-finger gestures like swiping to switch between apps. Surprisingly, I never felt like it was too cramped.

Otherwise using the X1 Fold as a mini laptop was… fine. Because you’re reduced to using a 7-inch screen in this mode, you can only get about three app icons on the taskbar at once unless you reduce the OS’s font and icon size. Doing that on a screen this small makes any text quite hard to read. And don’t even think about running two windows side by side -- they’ll barely fit or be so small that you’ll need to scroll forever to see everything.

The X1 Fold uses an Intel Lakefield Core i5 processor with Intel’s “Hybrid technology,” which the chip maker says is “engineered for mobile performance.” It uses architecture similar to ARM’s big.Little design, relegating less demanding tasks to lower-power Atom cores and tapping bigger cores for tougher processes. In general, the Fold kept up with my needs, and the few hiccups I came across seemed more to do with glitchy software than a slow processor. For example, sometimes Lenovo’s mode switching tool wouldn’t work, and instead of letting me choose the window I wanted open on either half of the display, it would just show two random apps I had open. Switching between landscape and portrait modes would bring up all the windows I had open, for example, and I often had to wait for webpages to expand and fill the whole screen when I maximized them.

These were mostly issues that had to do with switching between modes -- when I stayed in either tablet or laptop orientations, the device generally kept pace. Granted, I didn’t do anything too demanding like editing video, but for most of my day to day workflow the machine held up.

On our video rundown test, the X1 Fold clocked an impressive 13 hours and 30 minutes, which beats the Galaxy Tab S7+, the Surface Pro 7 and the iPad Pro 12.9. In real-world use, it generally lasts all day in tablet mode, though I found that using the keyboard seemed to drain the battery a bit more quickly. There’s also the option of getting a 5G-capable model of the X1 Fold, by the way, which I expect will sap energy even more.

I’m having a hard time recommending anyone buy the X1 Fold. I don’t want to diminish Lenovo’s achievement here -- it’s impressive that the company managed to make a foldable PC that it’s ready to roll out to the public. But as is the case with many first-gen products, the X1 Fold is an expensive experiment. If you buy this, know that you’re basically paying to be a beta tester. There are plenty of quirks to work out. While I’m excited to see companies innovate, the ThinkPad X1 Fold’s exorbitant price and lack of real benefits keep me from endorsing it. If you need a laptop-tablet hybrid that runs Windows and can fit in tight spaces, the Surface Pro 7 or the Surface Go 2 are much more reasonably priced and offer better productivity.