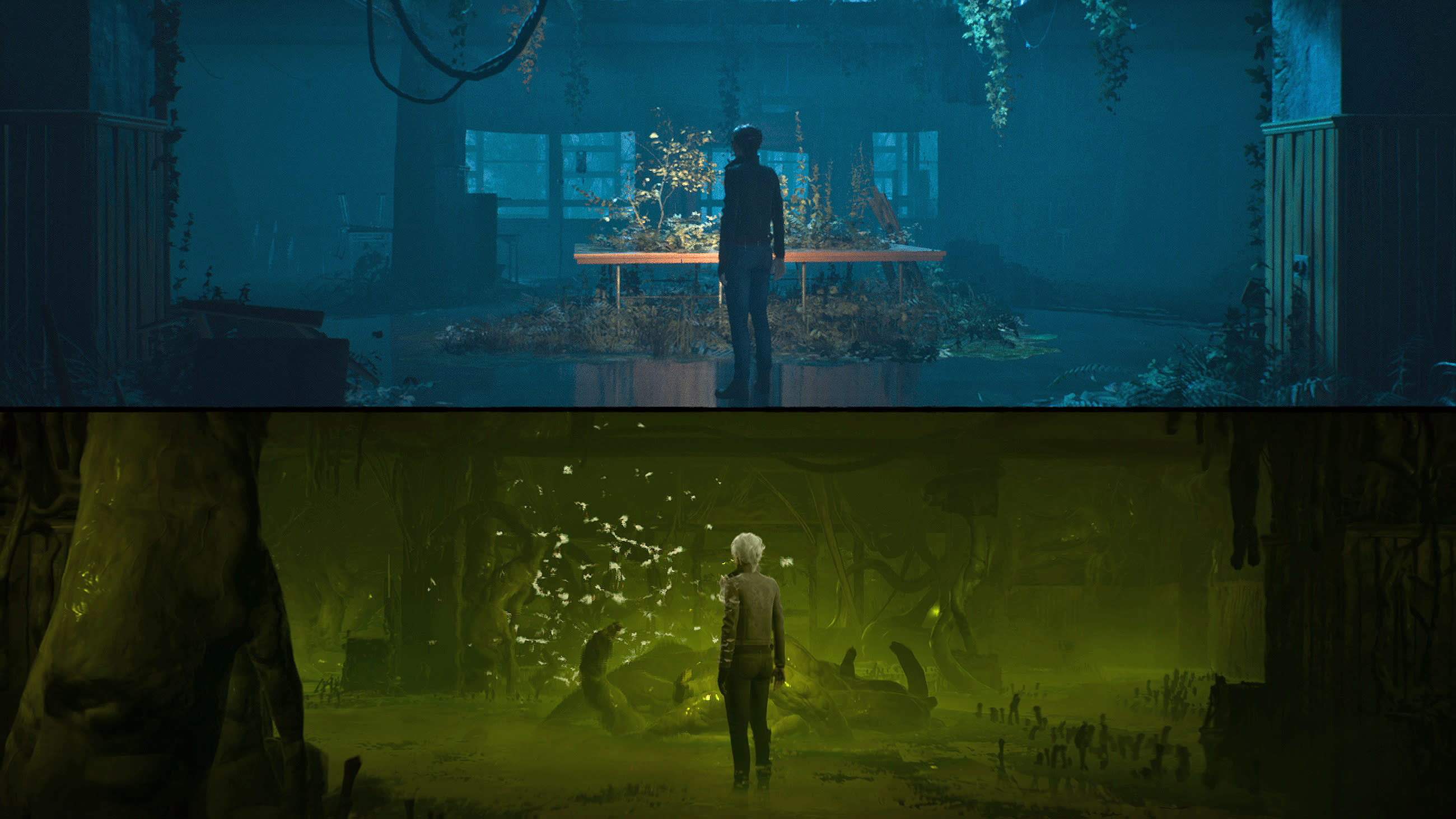 'The Medium' is appropriately average.

The Medium is a fitting name for the latest game by Bloober Team, though perhaps in an unintended way. Not only does The Medium tell a story about a woman with the ability to exist in dual realities and commune with the dead, but turns out, its title serves as an accurate review of the game itself. When someone asks whether it’s a dazzling horror experience or a middling excuse for a next-gen Xbox exclusive, the answer is right there: meh, it’s Medium.

The Medium tells the story of Marianne, a woman with the ability to usher the recently deceased to the other side. It’s the 1990s and she’s in Poland to set her late adoptive father’s affairs in order when she receives a mysterious call commanding her to visit Niwa, a long-abandoned Soviet utopia deep in the Kraków woods. There, she investigates Niwa’s horrific past, helps its spirits pass on, and discovers crucial information about her own upbringing.

Marianne’s supernatural abilities are raw, and she isn’t totally in control. While she can deploy a bubble shield or blast of light at will (and as long as she has enough psychic fuel), Marianne’s consciousness splits in two at random times, existing simultaneously in the planes of the living and the dead. When this happens, the screen literally splits into two segments, showing Marianne in both planes at once. One looks familiar, while the other shows an inverted, hellish version of reality. Here, she has extrasensory powers, including the ability to see the undead, soak up energy from memories and pass through certain physical barriers.

The split shows up vertically or horizontally, depending on the circumstance, and it’s endlessly fascinating to play out these scenes in tandem, but in totally different worlds. It’s like playing two games at once — and it’s a lot like rendering two games at once, which is one reason The Medium is exclusive to Xbox Series X and Series S (and PC), rather than eighth-generation hardware.

I played The Medium on Xbox Series S, Microsoft’s least-powerful next-gen console. The game crashed once at a dramatic moment and I had to redo about 10 minutes of action, which was horrifying, though likely not in the sense Bloober Team intended. Otherwise, the game ran smoothly. There were no visible loading screens, aside from post-death restarts, and even those took eight seconds, tops. I noticed animations popping in at the beginning of some scenes, and this alone was enough to make me fantasize about the game’s performance on Xbox Series X — something I find myself imagining with every Series S title I play, to be honest.

The best part of The Medium is Sadness. She’s the ghost of a grade-school girl, wearing a scorched porcelain mask and a blackened butterfly dress. The skin connecting her limbs to her torso has been eaten away and one of her arms has been burned off entirely. She encapsulates the game’s mood, both visually and aurally: The songs that play over her scenes are haunted-music-box levels of creepy, and they serve as a clear reminder that famed Silent Hill composer Akira Yamaoka contributed to this game.

Sadness pops in and disappears throughout Marianne’s investigation like the Cheshire Cat, offering her own childlike insight into Niwa’s past, simultaneously innocent and horrific.

This is the vibe I wish Bloober Team had chased while crafting The Medium. The game excels at providing a rich environment for exploration and uncovering fresh terrors in the ruins of a Soviet-era massacre, but its most interesting points are often sacrificed in the name of introducing new mechanics or completing fetch quests. The ideas laid out in the game’s story — including an arc about child sexual abuse — are intriguing but barely explored. Gameplay elements like sneaking and holding your breath are introduced only to stagnate, used just a handful of times and then seemingly forgotten. Ideally, these narrative and mechanical features would build on each other to create more complex battles of strategy and tension, but the game seems stuck on Easy Mode the whole way through.

Puzzles in The Medium mainly consist of finding missing levers and navigating between Marianne’s dual realities to read pieces of paper and postcards. Just one puzzle sticks out in my memory for involving observation and deduction, while the remaining ones are distinctly surface-level. Usually, when I found myself stuck in a scene, it was because I had missed interacting with one of the small white dots denoting an object of interest, and I simply had to run around in circles for a while, holding LB to light up Marianne’s sixth sense.

Overall, the story unravels in a way that is both predictable and confusing, with a rotating cast of faceless villains and, eventually, the addition of a second playable character with abilities similar to Marianne’s.

The Medium introduces Thomas as a playable character in the second half of the game, and this is where things really fall apart for me. Thomas is able to transform emotion and memory into psychic power, much like Marianne, though he also has an ability called Spirit Force, which he uses to move large objects. Otherwise, they’re pretty much the same character.

The scenes with Thomas at the helm feel like filler. They’re unthreatening and tedious (ah, the tedium of The Medium), and don’t add a necessary perspective to the narrative. Most importantly, they’re not scary. Take the height of Thomas’ playtime for example: He’s running through a distorted, red-soaked landscape composed of towering filing cabinets, while a giant, demonic dog hunts him from below. Multiple times, he has to cross a single plank stretching over a gap big enough for the beast to run through. On approach, Thomas slows down, raises his arms for balance, and slowly walks across the beam. The demon dog runs past below him.

It’s a tense scene visually, but in my playthrough, I never felt Thomas was in danger of actually falling. I tried to knock him off of a plank at one point, just when the monster was barreling past, and while he swayed precariously, his feet stuck fast to the wood. Despite the nightmarish landscape, there’s no danger in these (and many other) scenes.

The Medium wasn’t supposed to be the first game to launch exclusively on Xbox Series X and S, but after the delays of Halo Infinite and CrossfireX, it ended up in the top spot. That’s a significant amount of pressure for any studio, let alone an indie team whose résumé is stacked solely with mind-bending horror games, and The Medium handles this responsibility elegantly. For the most part, it performs smoothly even on this generation’s baseline hardware, the Series S, and the game’s trippy split-screen mechanics do a fantastic job of demonstrating the power of Microsoft’s new consoles.

Hopefully, with its next game, Bloober Team can remind us how well it does horror, too.