And players have had enough.
Engadget

For the past two months, Team Fortress 2 has been under attack by a horde of racist, homophobic, sexist, pornographic and generally bigoted robots. The bots appear in nearly every match, spewing hate speech in the chat, using cheats to automatically secure headshots, and taking advantage of cosmetic exploits to disrupt gameplay for all of the actual players.

Frustrated fans have been posting about the invasion in the TF2 Steam forums, and on Reddit, Twitter and YouTube. Valve, the company that created TF2 and Steam, has responded with silence.

“I would describe it as disastrous,” longtime TF2 player Jason Hughes said. (His name has been changed to protect against targeted in-game attacks.) “There have been literally hundreds of threads on the Steam forums and numerous YouTube videos about it. I and many other people have sent messages to Steam Support and receive robotic responses asking us to post on the Steam Forums and report the individual accounts. That has accomplished nothing.” 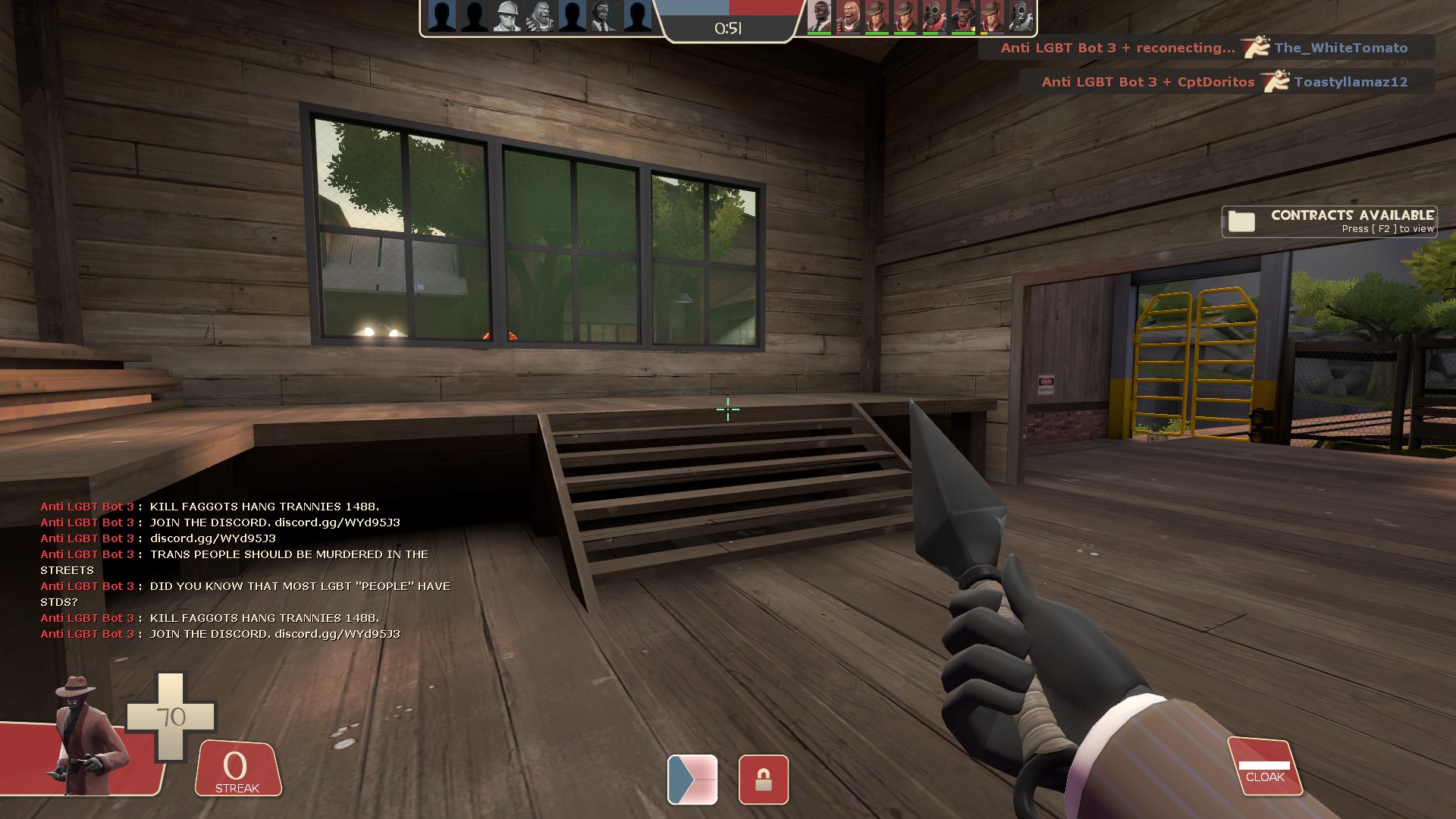 Recently, high-profile developers like Activision have made headlines by taking active measures to remove racism, sexism and homophobic speech from their online communities. TF2 players have been attempting to get Valve’s attention by reporting similar behavior by the bots, but nothing has worked so far. TF2 forum posts on Steam carry titles like, “Anti-LGBT bots, and not giving up hope,” “why won't devs do anything?” and “Encouraging Valve into action on abusive bots.” The posts offer advice on dealing with the bots in-game, and some even offer promising leads about the source of the swarm.

One user noticed an uptick in anti-LGBTQ rhetoric among the bots on June 1st, the beginning of Pride month. Here’s how that player described it (edited for clarity):

Now they spam homophobic and transphobic messages (and one that has anti-semitism in it too).

Being a trans person this was rattling to see, to say the least. It's obvious this is because of pride month. So it's at least gonna be around for the rest of the month, and that really sucks. But we can't give up hope. This game has been a source of joy for me for a long time now, and I'm not gonna give up on it.

This is sorta about the Bot Crisis in general. If we give up on this game the script kiddies win, and specifically if we give up because of these bots in particular, bigoted people win. It's rough for everyone no matter what, but giving up isn't going to fix any of it.

Valve locked that particular post without offering any comment. A Valve spokesperson responded to Engadget’s questions about the situation with, “We are aware of the issues and actively investigating solutions.” That’s the most Valve has said on the topic this year.

“They still make quite a profit from TF2 but have not done anything at all that I know of to address this,” Hughes said. “In my view, that's very unethical. To continue taking people's money and not giving them a functioning product in return? No way.”

TF2 is one of the longest-running online shooters around, with 13 years on the market and a loyal, cultish fanbase. This is despite the fact that Valve hasn’t significantly updated the game in at least two years, even as competitive online shooters have exploded in popularity alongside the esports and live-streaming markets. 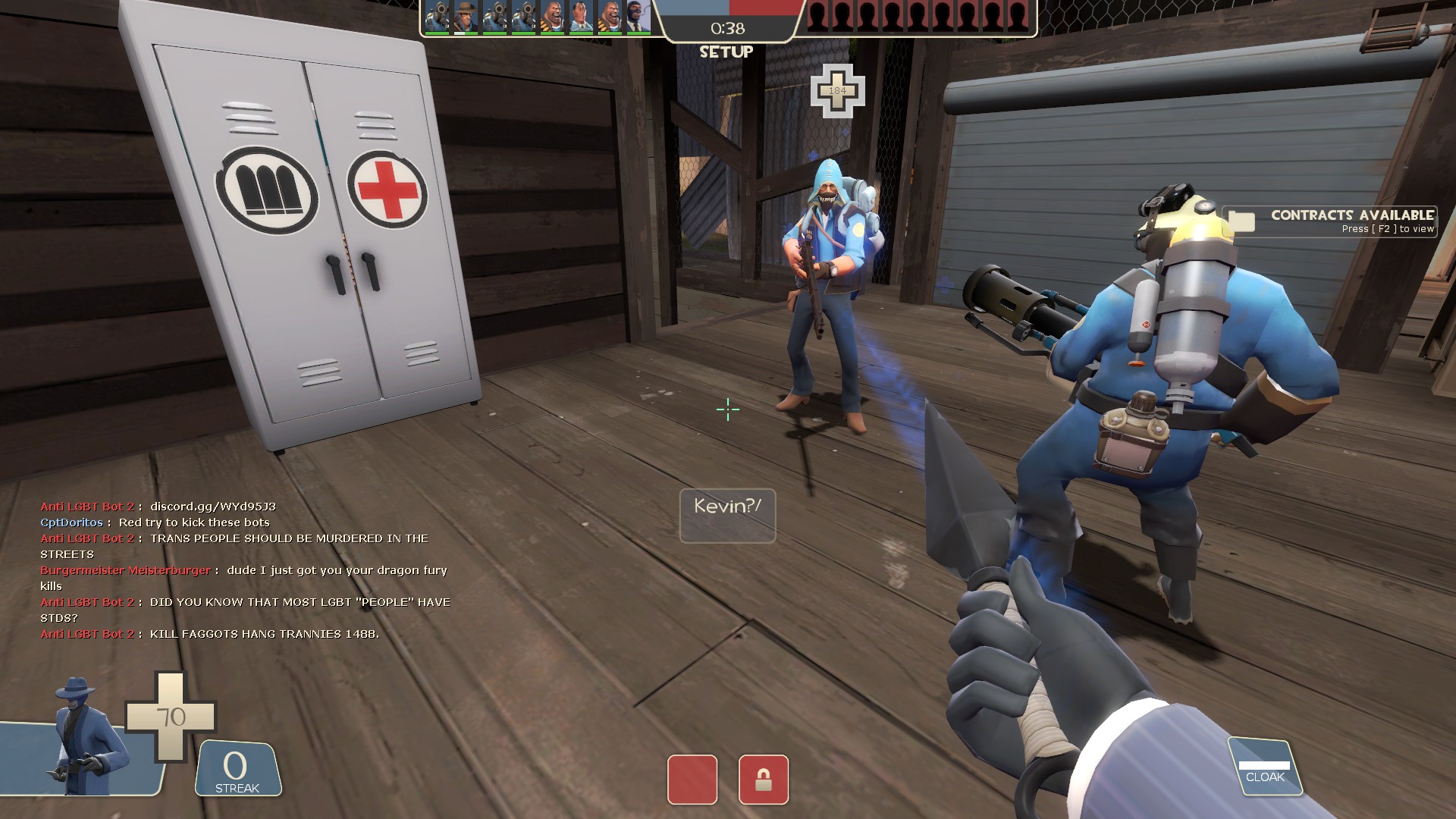 While games like Overwatch, Fortnite, Valorant and Valve’s own Counter-Strike: Global Offensive have rocketed to the forefront of the industry, TF2 was left to languish in the mid-2010s. Valve reported having 16 people on the TF2 development team in 2017, and even then players joked that the company was probably counting janitors, voice actors and people in the halls.

Still, TF2 remains one of Steam’s top games, with tens of thousands of players online at any given time.

Hughes said bots started appearing in TF2 in 2017, though back then they were rare. Activity ramped up at the beginning of 2020, and over the past two months, it’s become unbearable.

“They use aimbot and spam chat with content that's racist, homophobic, inflammatory, pornographic -- including child pornography -- and just generally offensive,” he said. “Some of them are able to copy people's names and even avatars, leading to many innocent players getting kicked from matches. I'm not certain, but I believe some bots can even initiate the kick votes themselves. It's even possible for them to follow you from one match to another.”

Hughes estimates 80 percent of his matches have at least one bot, but it’s more common to see multiple at a time, or even be outnumbered by them. Players suspect the bots stem from an ongoing, open-source project on Github, plus a handful of copycats. But that’s just a guess.

“If Valve were motivated at all, they could find out,” Hughes said.

That’s not a baseless assumption -- in April, the source code for both CS:GO and TF2 leaked online, and Valve was quick to contain it and make public statements. And in late March, some of the TF2 bots figured out how to crash the game’s servers, rendering it unplayable. That exploit was patched within a week, but a majority of the bots remained. 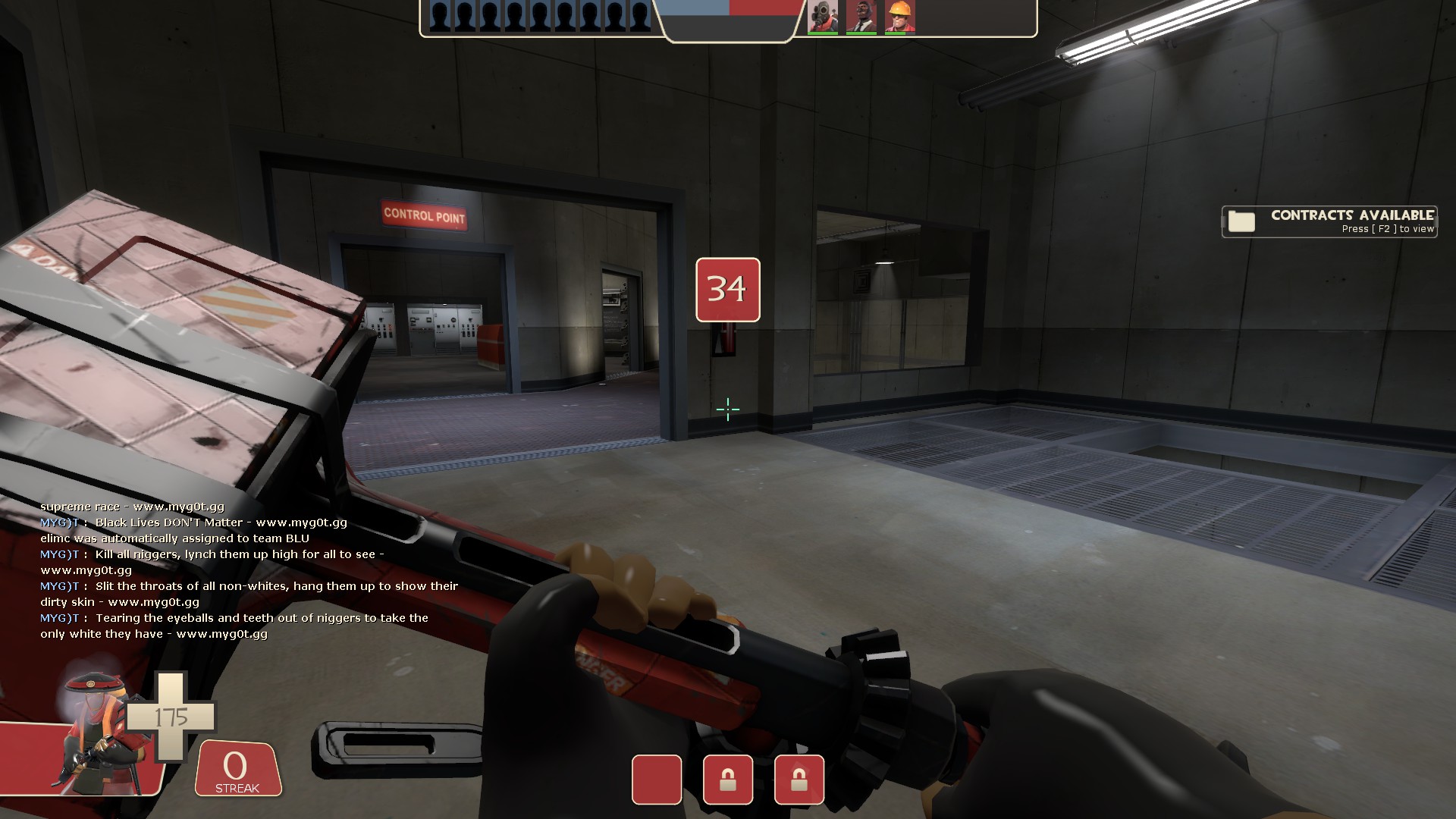 “I refuse to buy any more games or give them any of my money until this is fixed,” Hughes said. “My opinion of Valve has been deeply damaged and I don't know if it will ever recover. There's absolutely no way they aren't aware of this.”

It’s unclear why Valve has largely ignored TF2’s bot problem. It’s a long-running joke that Valve quietly abandoned TF2 years ago, but developers have popped up and updated the game just enough to keep hope alive.

Valve is notoriously secretive, and the company has a reputation for doing whatever the hell it wants, fans and Steam developers be damned. It’s the proprietor of a handful of legendary franchises that have stalled out at the height of their popularity, including Left 4 Dead, Portal and Half-Life. Left 4 Dead 2 came out in 2009 and Portal 2 followed in 2011, and that’s the last players have seen of those series. Half-Life: Alyx landed in March, and it was the first new installment in that series in 13 years, though it isn’t Episode 3 and it’s exclusive to VR platforms.

As the owner and operator of Steam, Valve has offered participating developers a royalty rate of 70 percent for over a decade. When the Epic Games Store launched in late 2019, it offered developers a rate of 88 percent, much closer to the demands of the day. Epic CEO Tim Sweeney even said he’d pause his store’s collection of exclusive titles if Steam upped its cut for developers, but Valve hasn’t budged.

In short, Valve is an incredibly rich, private company that doesn’t answer to the demands of players or developers. For now, that means TF2 is on a life support system managed mainly by fans, rather than developers.

“It's natural for games to decline over time, but this one is still going strong despite Valve's care, not because of it,” Hughes said. “Matches are frequently composed of very unbalanced teams and the autobalance system is bad, among other things. Yet many still play. But if they fixed that stuff and still made substantial new updates, the player count and by extension their profits, would be much higher, in my estimation.”

I asked Hughes if he planned to continue playing TF2, and he said he wasn’t sure.

“It's just really sad to see it come to this point, especially when so many of us are in quarantine and aren't able to get out as much,” he said. “And with all the bad things happening in the world these days, being exposed to all the ugly stuff imposed by the makers of this plague is just insulting.”

If TF2 is supposed to be an escape from the everyday grind, the bots are a harsh reality check -- but maybe that’s exactly what Valve needs.