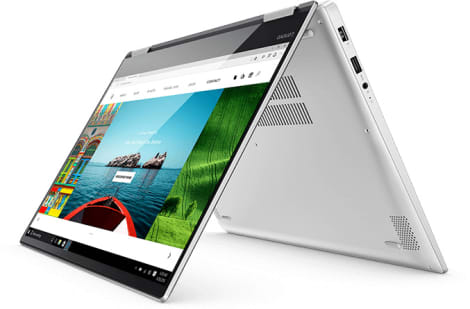 70
Scribbler
The Lenovo Yoga 720 13 inch has a lot to love on paper. It has a fast quad-core...read more
Write a Review
Write a review
70
Average user Score
70
Scribbler
02.22.19
The Lenovo Yoga 720 13 inch has a lot to love on paper. It has a fast quad-core 8th generation processor (some models had older 7th gen cpus), plenty of memory (8 or 16gb) and fast solid state storage using an NVME ssd. It put all those great spec points into a sub 3 pound 2-in-1 form factor with a beautiful 1080p display with touch and pen input and a large precision touchpad. My first impressions of the machine were good. It has handsome looks, though the aluminum casing is not particularly exciting. However upon closer inspection, I noticed that the build tolerances were not very high. Uneven panel gaps exist between the bottom plate and the rest of the frame and between the lcd glass and casing. Even brand new, some uneven cuts can be seen along the beveled edges of the laptop, and some have been known to arrive from the factory with scratches in the aluminum. On top of these issues, the lid on my unit does not align with the base when closed. On my laptop it sticks out to the right about three millimeters. All-in-all, the build quality is mediocre, which hinders a potentially premium device. In case you're wondering, I'm not alone in these complaints. Scouring the web for other people's feedback about this device brings up similar issues. I was just lucky enough to get all of them on one machine. Beyond the build quality, other aspects of the laptop's design seem questionable. For instance, the notebook is meant to be used in tablet form, where it would be held by the screen bezel, but the thin lcd glass has no backing or support at the edges, causing it to push inward with any pressure. This leaves a visible and definitely tactile lip on the inside of the screen, and makes me think of cracked phone displays... except the glass on this laptop appears to be thinner than most phone displays (less than 1mm thick). On top of the fragile LCD design, the laptop itself is very thin which is a credit to the engineers at Lenovo, but the frame is made of all soft aluminum with very little in the way of support inside. The laptop flexes easily under pressure and mine at least came from the factory slightly bent. I was able to mostly straighten it out with careful application of pressure, but that does not imply a rigid structure. I have had this laptop for about a year now, and I am beginning to notice other problems as well. For instance, large sections of the touchscreen frequently become unresponsive or respond to phantom touches that can really disturb your work. Disabling touch will fix these phantom touches, but then you're left with a traditional laptop. Other people have complained that the lcd flickers on and off as well. I have experienced this as well, but only a few times as of yet. Keep in mind I have kept my laptop in a protective case while I've had it and I haven't subjected it to any extreme stresses outside of being compressed in my well-padded messenger bag. The corrective bending I mentioned earlier was done on the base of the laptop, not the lcd. Then there's performance. I don't ask a lot from my laptop, I mostly use it to write reports, browse the web, watch movies, and do some coding. However, the performance sometimes lags while web browsing and I never really knew why until recently. I downloaded a benchmark and monitoring program from intel and discovered that the cpu immediately thermal throttles under any load. That means that I can't expect to get 3.4ghz performance from one task for more than 1 second of 100% cpu utilization. It is expected for a mobile cpu such as this that it will reduce clocks closer to its 1.6 ghz base clock under heavy multi-threaded loads, but since this machine does it under single-threaded loads as well, it's really just a 1.6ghz computer and only theoretically a 3.4ghz one. At idle or low loads, I do see the computer change cpu speeds throughout the entire spectrum, so I know it's at least capable of reaching all speeds, just not maintaining them under any load for more than a (useless) fraction of a second. While my experience here is anecdotal, many people complain that this computer is loud. These complaints vary in description from 'loud all the time' to 'gets very loud' and in my experience it's usually silent at idle, but gets loud as soon as load is applied. The above implies that the cooling solution is either faulty (not transferring heat from the cpu) or insufficient to cool even the 15 watt cpu that is included. Surprisingly, this computer has two fans, so one would expect that the cooling would be sufficient. I expect some other flaw is keeping heat from being transferred from the cpu. I should mention battery life before I finish out this review. Lenovo promises 8 hours of battery life, and that might be achievable with wi-fi off and the dimmest possible (unusable) display while staring at the desktop, but I only get 4 or so with wi-fi on, screen brightness at a comfortable level, ("brighter" in windows 10) and using the computer for light workloads such as web browsing. While that is still sufficient for me, it is still disappointing, and might be inconvenient for someone else. Overall, my long-term experience with this machine is unsatisfactory. I bought this computer hoping to keep it for four years or so, but at this rate I don't think it will make it to two. I was hooked by the shiny aluminum, thin design, and fancy spec sheet, and I didn't consider important things such as reliability and durability that don't appear on spec sheets.