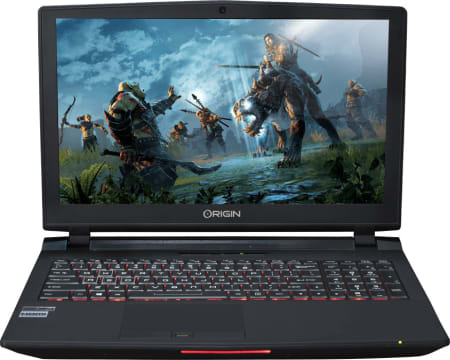 81 Global Score
There's a lot to like about this in spite of a few flaws.
81

Plenty of gaming laptops will go so far as to bill themselves as a "desktop replacement," but only the Origin EON15-X goes so far as to pack in an actual desktop processor. And while that brings some gains in performance, it also adds to the typical gaming laptop woes of bulk and poor battery life.

The outside of this laptop is a little different from the usual Origin aesthetic, with TechRadar noting that its newly reserved styling "won't stick out too much until someone notices the aggressive rear vents and multi-colored keyboard." Laptop Magazine really enjoyed the black soft-touch coating that adorns most of the machine but, if you wanted something flashier, the company also offers glossy red or white options at no extra charge. Besides finding these additional colors attractive, PC Gamer noted they also "mask fingerprints really well."

However, a subdued exterior isn't the only element of the EON15-X's design that really stands out. TechSpot found that upgrading it is "as easy as it gets for this form factor" thanks to an easy-to-open panel, a socketed CPU, and the graphics card sitting in a standard MXM slot. In fact, they say it's probably "easier to upgrade than some desktops."

But with performance that PC Mag found "head and shoulders above competing systems" and processing power that "mops the floor with the competition," you won't necessarily have to. TechSpot says it's the fastest laptop they've ever seen and "would give a lot of sub-$2000 gaming rigs a run for their money." In practice that means it "multitasked better than any machine" that TechRadar's ever tested, and Laptop Magazine feels it "throws a hell of a haymaker" in gaming performance, handily taking on the "notoriously taxing" Metro: Last Light.

Unfortunately desktop-class performance comes with some of the usual problems. Though Origin bills the EON-15X as the "thinnest and lightest laptop to feature overclocked 4th generation Intel Core i7 desktop processors," it still weighs in at 7.7 pounds. So you're unlikely to carry this around every day, though PC World says it's still "manageable for hiking to your buddy’s house for an ad-hoc LAN party or bringing it to your relatives’ house to cut video."

And though TechRadar was surprised by the over two hours of battery life they managed to eke out of the EON-15X, TechSpot calls that "abysmal in an age of laptops that last several hours," and Laptop Magazine says it "should never be more than a stone's throw away from an outlet."

If you've been looking for desktop-class performance but just don't have the room for an actual gaming desktop, the EON-15X is worth a look. It's got plenty of power to take on some of today's hottest games, with an eye toward the future in its easy upgradability.
80
Average Critic Score
Critic Reviews 7
80
PC World
Origin EON15-X review: You'll find a desktop CPU i
For a gaming laptop that’s almost portable, the Origin EON15-X offers performance that’s hard to beat. It doesn’t offer “desktop-class” performance or any of that guff, it actually offers desktop performance in a laptop. Period.
Read Full Review
70
Laptop Magazine
Origin Eon15-X Review
The 15-inch Origin Eon15-X packs the power of much larger notebooks.
Read Full Review
See All Critic Reviews
0
Average User Score
User Reviews 0
See All Reviews