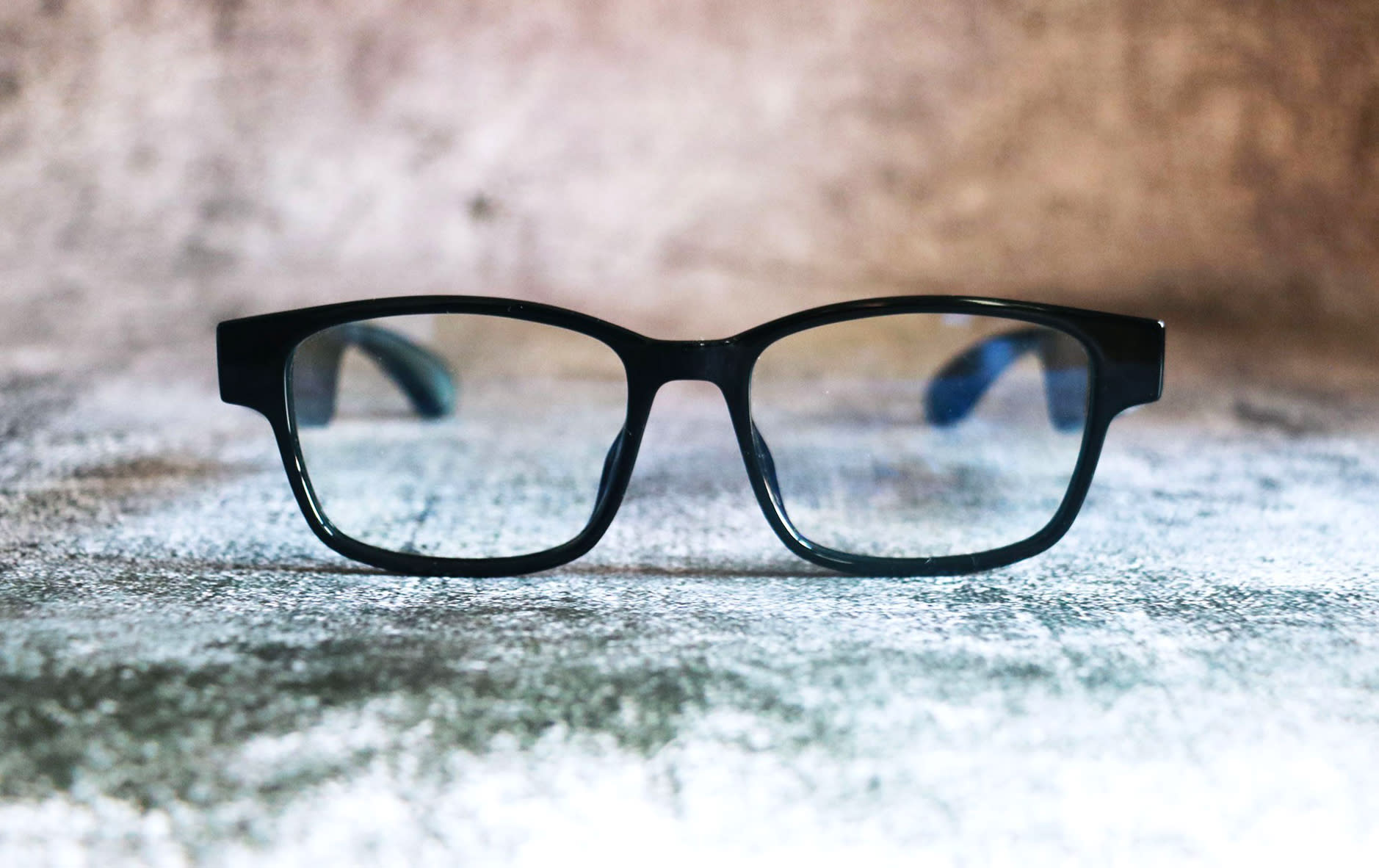 Its battery lasts longer than the Echo Frames but it's not as comfortable.

Glasses with speakers built into their arms are becoming a thing. Bose and Amazon released eyewear-headphone hybrids in the last few years — both named Frames. Now Razer is joining in with the Anzu smart glasses. Like the Bose and Amazon Frames, it’s basically a pair of glasses with speakers built into the arms that play audio without blocking out the rest of the world. But Razer’s device has a few unique features. Since it’s a brand known for its gaming products, it’s not surprising that Razer offers a “Game Mode” for low-latency sound. It also has blue-light filtering lenses by default and costs $50 less than the Echo Frames and Bose’s newer Frames. Are those features enough to set Razer’s latest wearable device apart from the rest?

At first glance, it’s hard to tell the Razer Anzu and the Echo Frames apart. I picked the “rectangle design” version of the Anzu, and it’s very similar in looks to Amazon’s device. They both have rounded rectangle lenses that are slightly oversized. But on closer inspection, you’ll notice a few differences.

Turn on browser notifications to receive breaking news alerts from Engadget
You can disable notifications at any time in your settings menu.
Not now
Razer

One — the Anzu has larger modules on its arms, which ended up making them less comfortable for all day wear than the Echo Frames. Razer’s device also has two charging ports — one on each arm. And while Amazon’s wearable has dedicated volume buttons and an action key in addition to a touch panel on the right arm, the Anzu has no physical buttons at all. The front section on both arms offer touch sensitive controls.

Like the Echo Frames, the small/medium Razer Anzu fits my fairly wide face well, and it’s also rated IPX4 for water resistance. But unlike Amazon, Razer does offer a bigger size. The Anzu also has springier hinges than Amazon’s, which not only help it accommodate larger heads but also makes it less likely to break. I like more squarish glasses, but those who prefer something rounder can choose to get the Anzu in the “round design”. Currently, it’s only available in black, while the Echo Frames come in three colors.

There are two ways to set up the Razer Anzu. You can either pair them to your laptop or phone directly via your Bluetooth settings, or use the company’s mobile app. If you go the straightforward route of treating these as a pair of Bluetooth headphones, the process is relatively painless. Just make sure the Anzu’s arms are unfolded, which turns them on and triggers pairing mode. Once you’ve linked them to, say, your laptop, you’ll have to manually disconnect them each time you want to switch to another device. To turn the glasses off you just fold the arms.

Things get a little more complicated if you choose to use the app. After I found and paired the Anzu on Razer’s Android app on my Pixel 4a, I was surprised when the music I played afterwards wasn’t coming out of the glasses. I still had to manually go into my phone’s Bluetooth settings to connect the Anzu for audio output.

That’s a relatively minor inconvenience, though, compared to my bigger problem with Razer’s smart glasses: the gesture controls. A tutorial in the app will walk you through all the touch gestures available, letting you try each function out and choosing what they do. The Anzu can recognize — excuse me, is supposed to recognize — a single press, double tap, triple tap, long press and triple tap with a long press at the end. But it’s important to note the Anzu will only recognize a press, not a tap.

I tapped the side of the frames once and was told I got it wrong. I tapped twice, thrice, faster and slower, but none of them worked. Only after I decided to try to triple tap and hold did I get my first successful reaction. It turns out that you can’t be too fast with double or triple taps or they won’t register, and your single press has to be slow and deliberate. A long press? Make sure you hold your finger to the arm and count to three.

What makes this strange slowness to gesture recognition more frustrating is that for some reason, while it won’t recognize my actual attempts at tapping, the Anzu is happy to randomly react to accidental touches. Whether it was our video producer touching the frames to pass them to me, or my hand brushing past them during a livestream of the Engadget Podcast, the Anzu decided those were legitimate taps and proceeded to loudly stream music from my phone.

When they are accurately detected, the gestures work fine. By default, a double tap skips to the next song, a triple tap goes back to the previous and the triple tap with a long press combo toggles Game Mode on or off. A long press brings up your preferred voice assistant, whether that’s Cortana on your laptop or Alexa or Google Assistant on your phone. The Anzu executed all these quickly enough, once I figured out the exact rhythm to the actions. Unfortunately, there’s no way to control volume from the Anzu itself — you’ll have to use your phone or laptop to tweak that.

I was curious about Game Mode, which according to Razer’s app enables “low latency audio.” The company said this uses an “industry-leading 60ms” Bluetooth connection to make sure your streams are smooth and “stutter-free.” I activated Game Mode and played a few rounds of Cooking Dash, which at my expert level involves high-speed racing around to pick up ingredients, prep and cook them and serving dishes to highly impatient customers. I rely on audio cues to tell me when I’ve picked up an ingredient or when a new customer arrives, and any lag in sound just feels jarring.

Without Game Mode on, Cooking Dash’s audio was noticeably delayed, making everything feel sluggish. With the low latency activated, I noticed a slight improvement, but the game still felt slow. Razer hasn’t responded to a query about what games and devices this is compatible with.

Apart from gaming and frustrating gestures, I actually enjoyed using the Razer Anzu. Like the Echo Frames, their open-ear speaker design provides a convenient way for me to listen to video chats and YouTube streams. As expected, the audio quality isn’t great — music sounds hollow and lacks bass, but it does get pretty loud. In fact, at volumes above 50 percent, people from about six feet away could hear noise leaking from them. I could still hear my music when I turned the sound down below that level, but not as well.

The Razer app offers three EQ presets that you can enable when paired to a phone, but none of these provide stronger bass for music. In addition to the default profile, there’s “Enhanced Clarity” and “Treble Boost.” They sound very similar to each other and made high and mid tones louder. They were generally better for podcasts or calls than for songs. I wish Razer gave us a bass boost option or some way to customize an EQ profile, but I also don’t expect world-class sound quality from most open-style speakers like this.

I do like that the Anzu comes with 35 percent blue-light filtering lenses, which gives a non-glasses wearer like myself a reason to keep them on. At least in theory it made me feel like I was protecting my eyes. I didn’t actually notice a huge difference in how strained my eyes felt throughout the day, but my temples did feel like the Anzu’s chunky arms were clamping in on them after a few hours. It’s definitely not as comfortable as the Echo Frames, which I had little problem having on all day.

Razer does promise more battery life than Amazon though. While the Echo Frames were estimated to last two hours of mixed use, the Anzu is supposed to stick around for more than five hours. Razer even says it will “never run out during long gaming sessions.” In general, the Anzu stuck around for a few hours. But after an hour of nonstop streaming the news, it dropped to 10 percent and automatically shut off.

One minor but weird thing to note: For some reason the Anzu’s charging setup requires you to connect both arms to its stethoscope-like cable at once. This is kinda clunky and didn’t appear to get the device recharged significantly faster, so I’m not sure if there are any benefits here.

For now, the Razer Anzu’s main draw is that it’s a decent headphone-glasses hybrid with blue-light filtering built in and costs $50 less than the Echo Frames. With better gesture recognition and noticeable improvements in its low latency Game mode, the Anzu could even be good enough for me to say it’s the best of the smart audio glasses I’ve tested. It has the potential to outdo Bose and Amazon if it made those updates and slimmed down its arms, thanks to good battery life and promising features. Until then, the Razer Anzu is just a pair of slightly uncomfortable smart glasses that’s a bit cheaper than the competition.