Cities around the world are embarking on a quest for sustainability. In addition to bike-sharing programs, advanced waste-sorting systems and alternative energy sources, the push to reduce the carbon footprint of cities has also moved skyward, to the green skyscrapers that are redefining the environmental impact of the modern skyline.

Technologies like rainwater collection systems, energy-efficient glass and greywater recycling not only help this new class of super towers run efficiently, they are changing the way we think about urban sustainability. We partnered with the Toyota Prius to showcase the most impressive green skyscrapers around today and the innovative technologies that made them possible. 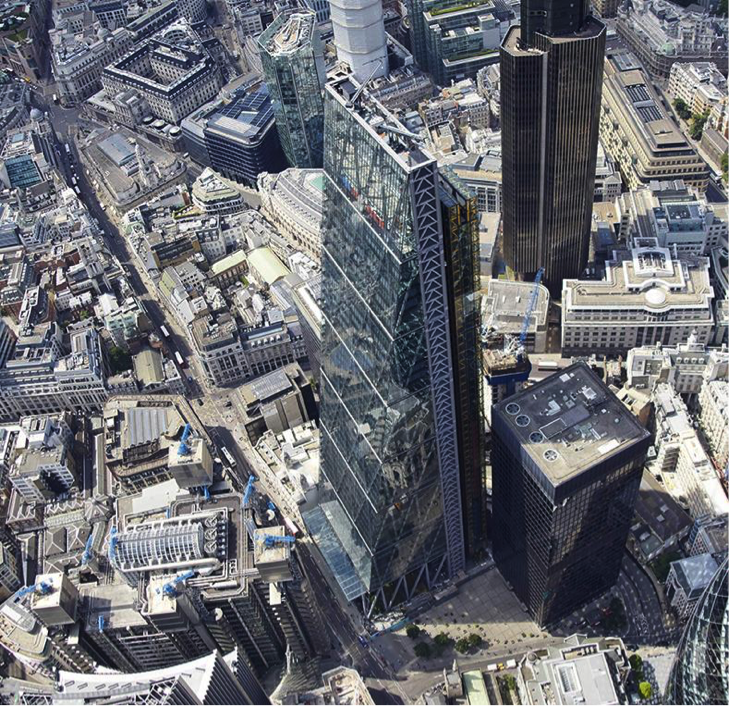 The Leadenhall Building, among the latest additions to the city of London's skyline, takes the critical green metric of energy consumption very seriously. The windowed facade of the building consists of an inner and outer layer of glass, and the space between the two is occupied by a system of blinds that responds to the sun's movement and helps to keep the interior cool during the day. The facade also features vents on every seventh floor that allow air to flow through the space between the layers of glass, further cutting down on the energy needed to cool the building.

Nearly 300 electricity meters throughout the building allow tenants to actively monitor their power usage. Leadenhall is also outfitted with low-flow water fixtures, which help keep the water bill low. But perhaps the most impressive fact about the Leadenhall Building is how it was built: Through a Design for Manufacture and Assembly process, more than 80 percent of the skyscraper's components were built off-site, a construction method that typically cuts the carbon footprint of the building project in half.

Londoners have been quick to welcome the "Cheesegrater" to the city's cast of glass-and-steel characters: The city named Leadenhall "Building of the Year 2015." 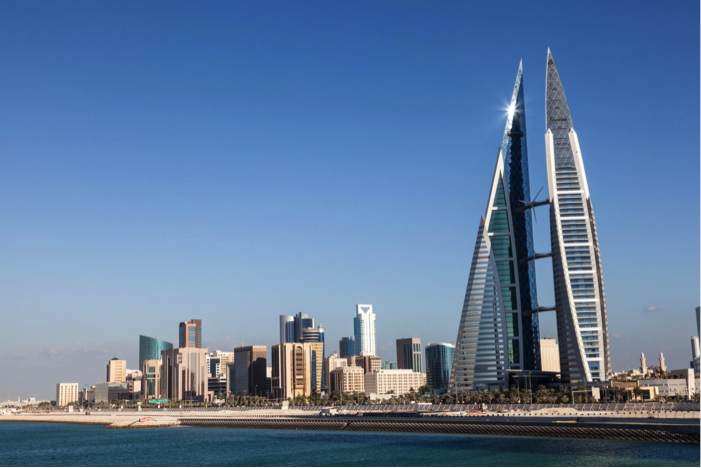 Located in the capital city of the Persian Gulf nation, the Bahrain World Trade Center holds the unique distinction of being the world's first skyscraper complex to incorporate wind turbines into the design of its structure. The three wind turbines bridge the two skyscrapers (as seen above), and they are all facing north to maximize wind energy capture. Together they are able to provide up to 15 percent of the superstructure's annual electricity needs.

While the turbines are its most impressive feat, The Bahrain World Trade Center also generates solar energy to power streetlights on the ground and takes advantage of a heat recovery system that uses pre-cooled air to condition incoming ventilation air, which further cuts down on power consumption. To round out the power savings, the complex uses variable-volume pumping system to distribute water to the two towers, which uses much less energy than conventional positive displacement pumps. 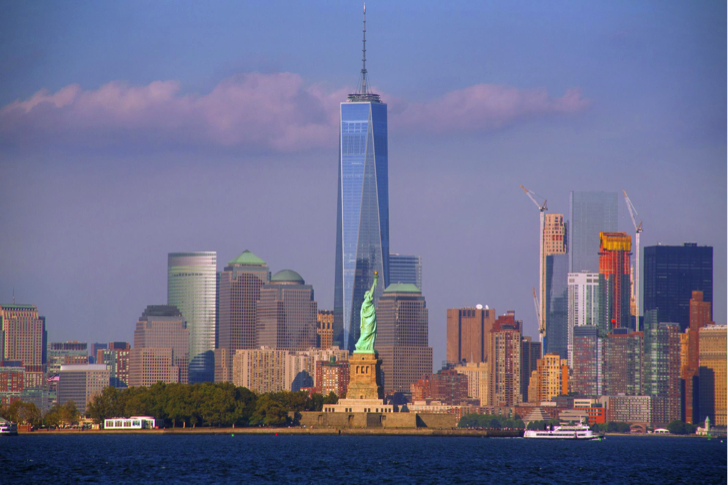 Currently the tallest skyscraper in the Western Hemisphere, One World Trade Center belongs to an exclusive club of supertall buildings that were built from the ground up with sustainability in mind. Both the interior and exterior of the tower were built using a significant quantity of recycled post-industrial materials, and half of the building's wood was supplied from reclaimed sources; all told, almost three-quarters of One World Trade Center is made from recycled and reclaimed materials -- another important consideration when building green. Other eco-friendly features include a rainwater catchment, or collection, system that uses 100 percent stormwater runoff to supply the building's cooling system, energy-efficient LED lighting and the extensive use of "green concrete."

And who needs to run a desk lamp when your work space is bathed in natural light? The glass facade of One World Trade Center is particularly impressive, as it has no intermediate mullions, or separating bars, between the massive glass panels -- extending floor to floor, at a height of more than 13 feet -- allowing sunlight to reach 90 percent of the building's office space. 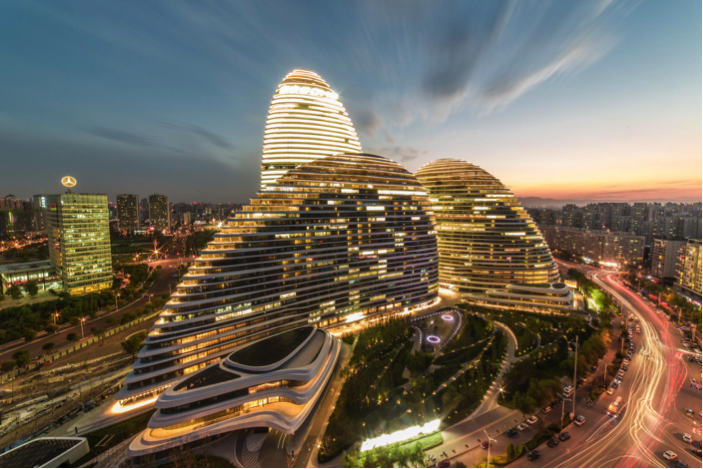 Designed by the late Iraqi architect Zaha Hadid, Wangjing SOHO -- a collection of three curvilinear buildings -- won the prestigious Emporis Skyscraper Award in 2015. Home to startups and IT firms, Wangjing SOHO takes advantage of its unique design to allow natural sunlight to enter each building from every direction throughout the day, and thanks to its double insulated low-e glass windows, that means more brightness and less heat.

Wangjing SOHO's green cred runs much more than skin-deep, though -- down to the plumbing, in fact. Its greywater recycling system, which repurposes all water streams (with the exception of wastewater) through a filtering and treatment process, is able to save 40 percent of the buildings' water, a no small feat considering the thousands of occupants who work across the combined 1.2 million square feet of the three buildings. Efficient electrostatic air filters continuously pump fresh air into the towers, and the intelligent building management system keeps a watchful eye on power usage to minimize overall consumption. 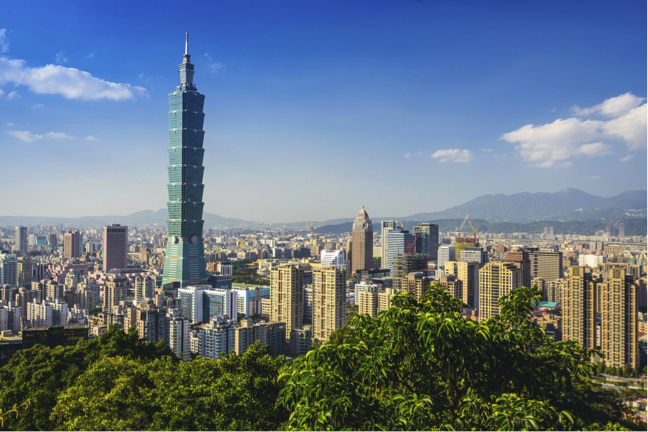 The Taipei 101, named for the number of floors it boasts above ground, held the record for the world's tallest building for five years until it was surpassed by the Burj Khalifa in 2009. Despite losing the title of world's tallest, the Taipei 101 achieved a new distinction in 2011 when it earned LEED platinum certification, making it the tallest and largest green building in the world.

An energy management system monitors power usage throughout the tower, allowing building managers to change the temperature, water distribution and cooling systems to save more than 33 million kWh annually, enough energy to power over 3,000 U.S. homes per year. The tower's low-e glass curtain walls reduce the intrusion of external heat by 50 percent. And thanks to an advanced waste recycling program that categorizes trash into 25 categories, Taipei 101 is able to recycle 32 percent of all its refuse. That's one sorted-out waste stream.

Green skyscrapers are in a class of their own when it comes to sustainability and intelligent design, leading us down the road toward smarter cities. Choose the intelligent, all-new Toyota Prius to explore these new cities with style and efficiency.