When it comes to portable chargers in the "high capacity but still just under the limit for carry-on" category, there's no shortage of options. But a huge battery that you can recharge quickly? That narrows things down a lot. Zendure, based in Palo Alto, is confident that their new SuperTank Portable Charger, with two USB-C ports, pass-through charging, and low-power-device compatibility, has the winning formula. And they're testing that formula on Kickstarter.


SuperTank is not Zendure's first power bank—they've offered numerous models since 2013—but it is their biggest, at 27,000mAh or just under 100Wh. The benefit is obvious: the more charge a battery holds, the longer it can power your devices. But the downside is that a bigger energy bucket takes longer to fill up. With USB-C PD (power delivery), Zendure's new SuperTank boasts a maximum input power of 100W.

This makes for some easy math: a battery that holds about 100 Watt-hours of energy, being supplied 100 Watts, would take about an hour to recharge. And considering a typical iPhone or Android smartphone has a battery with about 3,000mAh of charge capacity, that one-hour charge could power a phone through typical usage for a week. Users can monitor the remaining charge on the built-in LED display. 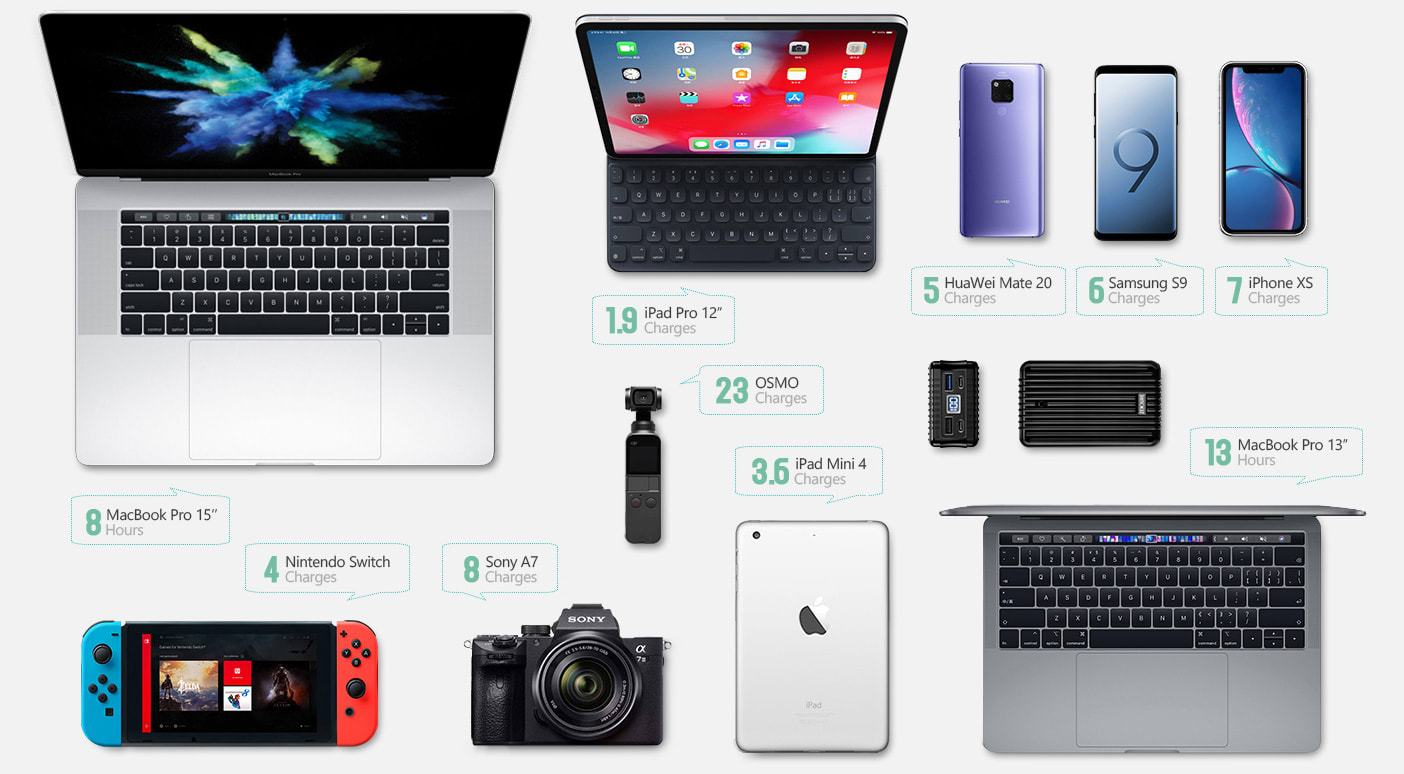 Dual USB-C Ports with Pass-Through Charging
Of course, these days, a lot of us have laptops that can be recharged through a USB-C port. One of SuperTanks's two USB-C ports can supply up to 100W of output power, charging most modern laptops at the same maximum speed delivered by their native chargers. For example, newer 15" MacBook Pro laptops can be charged within 1.5 hours.

The other USB-C port can deliver 60W, which is useful for pass-through charging. SuperTank's 100W port can be connected to a 100W power supply (more on that later), and the 60W port could be connected to a laptop. Both devices would be charged at the same time.

Pass-through charging has always been a big deal for Zendure—it was a major bragging point in their initial product line—but with SuperTank the company has taken it a step further. Zendure claims that their new portable charger can switch between battery mode and pass-through charging without interrupting the power flow to the output. This means SuperTank could basically serve as a UPS for a number of applications: security systems, network devices, etc.

Durable Power Bank Charges Devices Both Big and Small
Low-power devices—microcontrollers or wearables like fitness watches or rechargeable ear buds—are often a thorn in the side of external batteries, due to a minimum current limit. Portable chargers typically cut off power to devices if they are drawing less than the minimum current, which is usually somewhere between 80mA and 150mA. Zendure allows users to disable this limit with what they call X-Charge mode. This mode is toggled by double-tapping SuperTank's power button.

Because the 100W USB-C port can serve as both an input and an output, SuperTank can either charge a laptop or receive power from that laptop through the same port. The user can switch the direction of power flow by pressing and holding the power button.

Zendure recently launched a line of Kevlar-reinforced USB cables, so it should come as no surprise that they'd also want their power banks to withstand just about anything. Zendure's new portable charger is made of the same polycarbonate and ABS composite material as its predecessors, lending it similar durability and understated ruggedness to the company's other products. And the internal components are boasted to be just as resilient, to the tune of a two-year warranty.

Charge Four Devices Simultaneously
SuperTank has four outputs in total: the two USB-C ports mentioned previously, and two USB-A ports. One is a "ZEN+ 2.0" port, which is Quick Charge 3.0 compatible and can deliver up to 18W, and the other can deliver up to 15W. The maximum total output power across the four ports is 138W.

While Zendure's new external battery may not be the most pocket-friendly portable charger on the market, its large capacity, lightning-fast charging capability and vast array of convenient features make it an ideal choice for tech-conscious users who are constantly on the move.

Early-bird pricing for SuperTank is $89 USD, 40% off suggested retail pricing, and SuperPort 4 is available for $59.