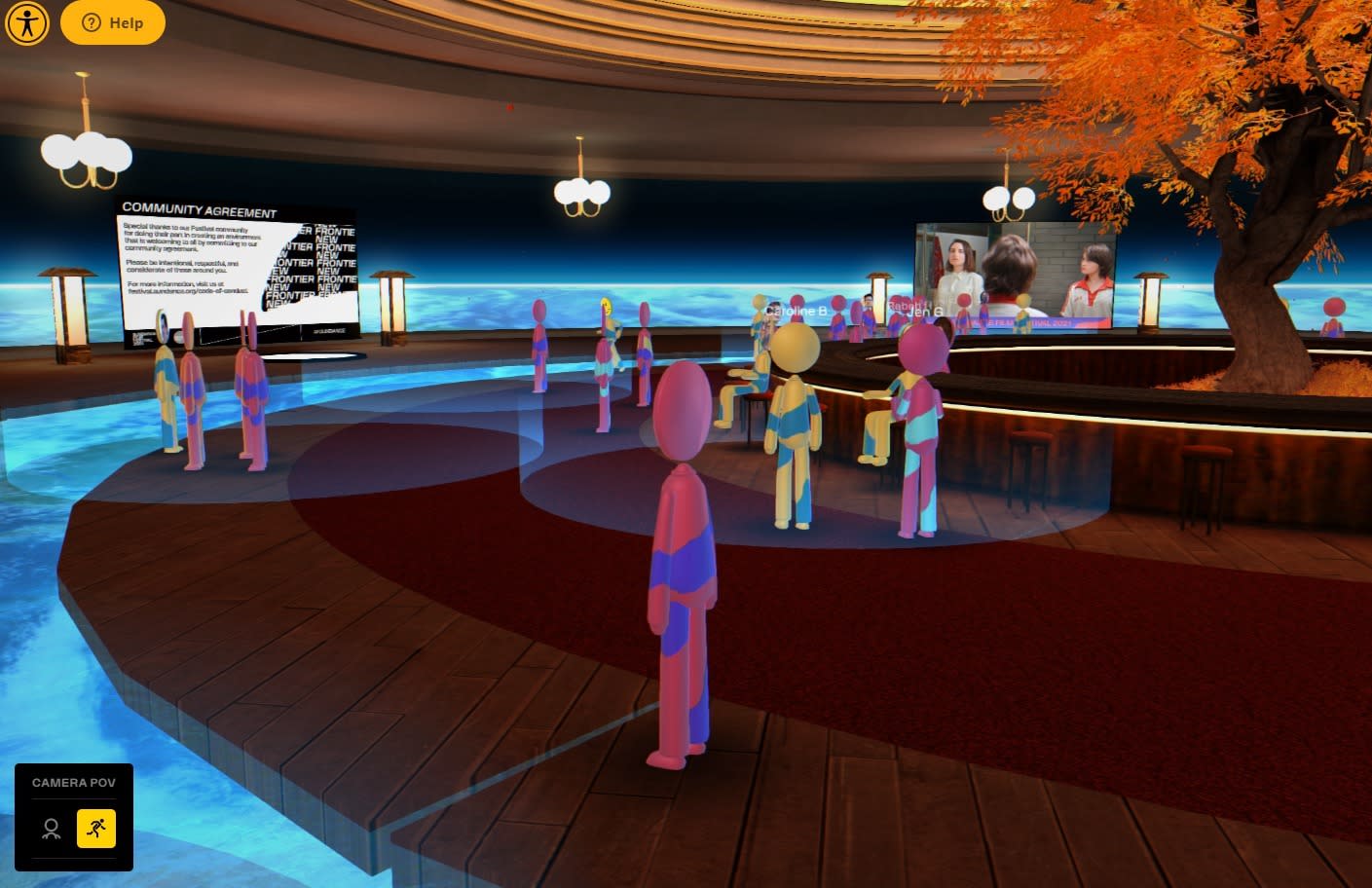 Online and in-person attendees will be able to chat across the "Biodigital Bridge."

Next year's Sundance Film Festival will mark a momentous return to Park City, Utah, after in-person festivities were cancelled last year. But Sundance isn't giving up on the digital platforms it used to stream films and bring cinephiles into a VR social hub last January. As part of its New Frontier exhibition, Sundance plans to expand The Spaceship, its virtual venue where attendees can chat together and explore VR and mixed reality art installations.

In an effort to connect Sundance's in-person attendees with its global online audience, the Festival will also launch a "Biodigital Bridge" in Park City. Shari Frilot, Sundance's Senior Programmer and Chief Curator of New Frontier, describes it as a human-scale screen where physical and digital attendees will be able to interact with each other. Developed together with the immersive studio Active Theory, the bridge will offer basic chat support, but it's mostly a way for Sundance-goers to see how other attendees enjoy the event.

Frilot says New Frontier has been pushing the concept of biodigital experiences for several years now, mostly through an exploration of how technology can intersect with our lives. Think of the way that an app like Uber, or even Google Maps, has reshaped the way we navigate physical spaces. But now that the pandemic has forced us to rely on our tech more than ever — Sundance wouldn't have been possible without it last year, after all — the term seems practically prescient. It's more than just a buzzword: Frilot says she's interested in exploring the technology that best serves humanity, or Team Human, as media theorist Douglas Rushkoff put it.

Last year, I found Sundance's online platform last year to be a fascinating way to explore the festival and interact with fans. The core of the experience is the aforementioned Spaceship, which allows attendees on computers and VR headsets to mull about together. On a laptop or desktop, it resembles a stripped down version of Second Life. You walk around as simplistic avatars, and if you choose, you can also flip on your webcam, which fills your avatar's head with a live video feed. Since Sundance's platform is built on WebXR, a way to deliver virtual reality over the web, you can enter that same space in VR by slipping on any headset and visiting Sundance's website.

Compared to SXSW's VR platform, which looked beautiful but mostly felt like a virtual wasteland, it was clear that Sundance got something right last year. After isolating for most of 2020, being able to see many of my cinephile friends in VR made last year's Sundance feel special. So for next year, Frilot says, the festival is going even further. The Spaceship will be upgraded with a new Cinema House, where attendees on computers and VR headsets can view events livestreamed from Park City, as well as room-scale discussions.

On the ground, Sundance will also have a new space called The Craft, which will let in-person attendees visit New Frontier exhibits, artist discussions and panels. There will also be VR headsets to use, though the festival is also encouraging people to bring their own gear if they've got it. Sundance hasn't finalized its list of New Frontier exhibits yet, but Frilot tells me many artists are optimizing for the Oculus Quest 2, so fest-goers can experience their work without being connected to a PC. But there will likely still be pieces that demand a serious VR rig. Sundance's famed Egyptian theater will also host some New Frontier performances, which will occur both on the ground and virtually on the Spaceship.

You'll need a $50 Sundance Explorer Pass to access all of these virtual goodies, which is double what it cost last year. It's a shame to see the price jump so quickly, but it's also reflective of the deeper commitment the festival is making in its digital platforms. Notably, the Explorer Pass is also open to people around the world, whereas Sundance's virtual screenings are limited to U.S. attendees.

"[The virtual platform] is not just this thing that we're trying, we're actually doubling down on this," Frilot says. "This points to the vital landscape of how cinema and storytelling is going to manifest [going forward]. We're here to not only contribute to it, but to meet it and support it."