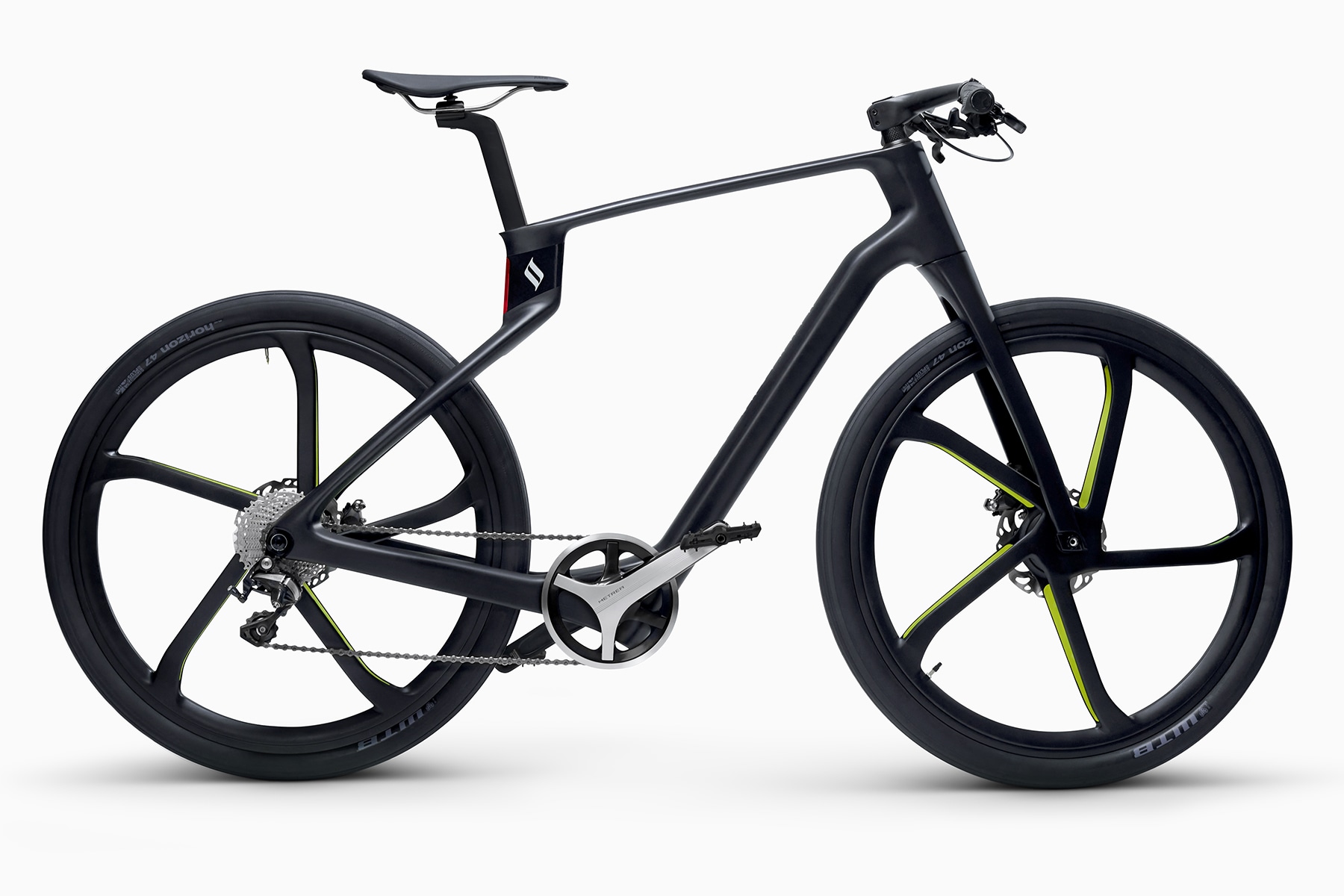 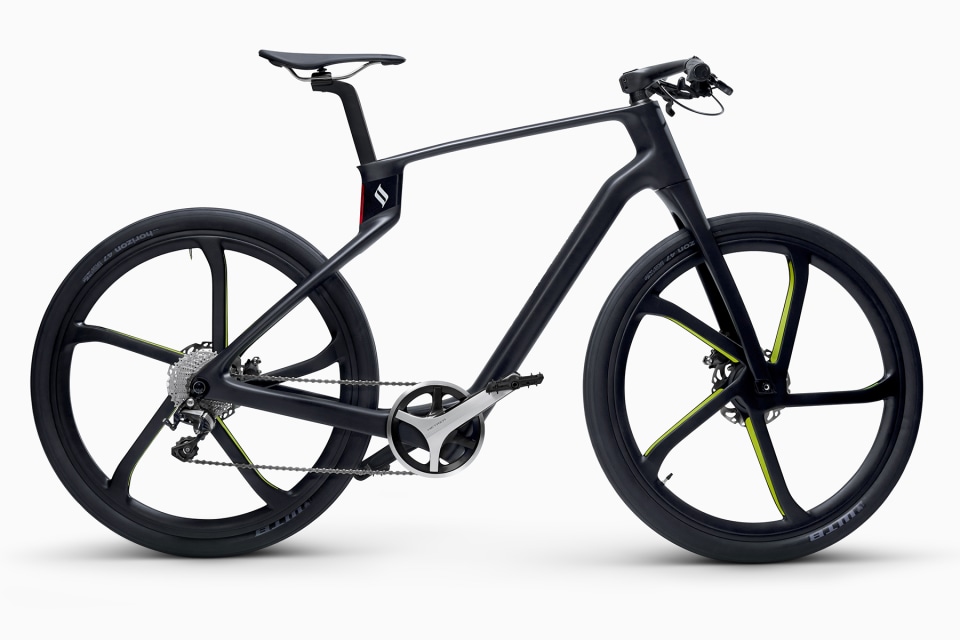 For years, the cycling industry has used 3D printing to make metal bike frames and smaller road-worthy parts. A 3D-printed carbon fibre frame, though? That’s harder to come by, even for elite riders.

Arevo wants to change that. The little-known manufacturer in California is launching a new bike brand today called Superstrata. Unlike most of its competition, which builds carbon fibre frames with multiple parts or pieces, the company has developed “a true unibody construction” that has no visible seams or welding marks. “This piece comes out as a single piece from our machines,” Sonny Vu, CEO of Arevo and the former CEO of wearables maker Misfit told Engadget. “So there’s no glue, no joins, no bolts, no laser welds, none of that stuff. If anything, things are shaved off in the post-processing [phase].”

Superstrata frames won’t be a single piece, though. The team is planning to print the main portion of the frame — which doesn’t have a traditional seat tube, creating an open diamond shape — and front forks separately. Still, it’s an impressive design feat that is catch the attention of other cyclists and road users.

The company will use additive manufacturing to build two similarly-shaped bicycles: a standard $2,799 ‘Terra’ model, and an electrified $3,999 ‘Ion’ version. That might sound expensive, however a carbon road bike can cost anywhere between $1,250 and $12,500. (And even higher, if you want something truly rare.) A top-end Riese & Müller e-bike, meanwhile, can set you back almost $9,000. Superstrata isn’t making a bike for the masses, but the company isn’t operating in the upper echelons of bespoke bicycle building, either.

“It’s less than your high-end carbon fiber bikes, but it’s not affordable in the common sense,” Vu accepted.

According to Superstrata, 3D printing offers a couple of crucial benefits. For starters, each bicycle can be printed to suit the exact dimensions of the rider. The company is promising “over 500,000” possible setups that account for the customer’s height, weight, arm and leg length, as well as their preferred riding position and level of frame stiffness. Most bicycle manufacturers, for comparison, offer a handful of frame sizes that account for most rider heights. And many e-bike startups, such as Cowboy, have a single specification to simplify manufacturing and repairs.

3D printing doesn’t require any expensive molds, either. That means the company isn’t tied down or incentivised to stick with the same frame design for a long period of time. The process requires fewer humans, too, than a traditional carbon fiber frame. “The materials for carbon composites are really expensive, but it’s really the labor that makes it expensive,” Vu said. “That was astounding to me. I always thought it was the material, but then I realized, ‘Oh, it’s actually the labor.’”

Finally, Superstata is promising “seamless strength” that trumps traditional monocoque carbon fiber frames. Vu told Engadget: “We say, ‘Well, your monocoque frame didn’t start as one piece. it was 20 or 30 pieces that are glued together, laser-welded maybe even together, wrapped. But it started as many pieces. And if it hits a tree, it’s going to end up being many pieces.” Superstrata’s bikes won’t be indestructible, but they should fare better if you take a tumble or stand it up haphazardly outside a cafe.

The Ion will ship with a 252Wh battery tucked into its svelte down tube. By e-bike standards, that’s small. VanMoof and Cowboy’s latest wares offer 504Wh and 360Wh batteries respectively, for instance. Superstrata is promising a 250-watt motor, which is effectively the industry standard for pedal-assisted e-bikes, that can rise to 350 watts in a pinch. It will deliver 40Nm of torque, which is well below the 75Nm that Bosch — the supplier for countless bike brands including Trek, Moustache and Riese & Müller — currently offers with its flagship generation four motors. (Bosh is also planning a software update that will increase the torque to 85Nm later this summer.)

Superstrata’s Ion will be lighter than most of its e-bike competition, though. The entire contraption should weigh 11KG, which is 1KG less than Gogoro’s Eeyo 1, 8KG less than VanMoof’s S3 and only 700 grams heavier than the folding Hummingbird. Like the Eeyo 1, the weight and “open-frame” design should make it easy to carry the bike on one shoulder. In theory, the the weight should counterbalance the smaller battery size, too. Superstrata is promising 96KM (60 miles) of range on a single charge and an assisted top speed of 32KMH (20MPH), which will be software restricted to meet Europe’s lower 25KMH (15.5MPH) speed limit.

The company has sourced some of its basic components — the tyres, saddle and groupset, for instance — from third-party manufacturers. We don’t know the exact model numbers, but Vu confirmed they would be fairly “standard” choices. Superstrata couldn’t pick top of the line components, he explained, because the team is ordering them in smaller volumes than traditional bike manufacturers. “The average person, I think they’ll enjoy it,” Vu said. “Pro bikers, they’ll probably scoff at it, the sets. But they can put in their own sets.”

Arevo has been working on its 3D-printed bike formula for some time. Back in 2018, the company unveiled a head-turning proof-of-concept with a blue frame that extended beyond the head tube fork and seat tube. Twelve months later, it unveiled the electric Emery One with Franco Bicycles, a premium road and gravel bike manufacturer based in California. Arevo has since announced that it will help Pilot Distribution Group, a company in the Netherlands, develop a new line off e-bikes that have 3D-printed carbon fiber frames.

With Superstrata, the company is finally striking out on its own. “I said, ‘You know what? Why are we doing this for other people? Let’s do it for ourselves and if other people want it, they can come to us,’” Vu said. “So that’s the idea. Let’s make a nice bike, end to end. Let’s build a whole brand around it and just have fun.”

To deliver its dream bicycles, though, the company is turning to Indiegogo. As with all crowdfunding campaigns, there’s no guarantee that the Terra or Ion will ever materialize. Arevo has been around since 2013, though, which is longer than many electric bike startups. Vu also hinted that the company is using the platform more as a marketing “launch pad” than a finance-raising tool. Still, any reservation is a gamble.

If everything goes to plan, Arevo will be delivering its first bikes in December. The company will make 500 two-wheelers in its initial run, according to Vu, through a combination of printing in the US and Vietnam. He hopes the Superstrata business will increase to “thousands, eventually,” but is keenly aware of how competitive the bike industry can be. If the brand doesn’t catch on, Arevo might have to pivot.

“As a 3D printing company, we can do that,” he explained. “We can say, ‘Nah, okay. We’re done.’ If you’ve invested into a whole line with carbon fiber molds and a complete production setup, you better sell tens of thousands of bikes or else you’re pretty screwed. But if 437 people are hating [Superstrata bikes] and we can’t get anyone’s attention, it’s okay. Let’s do baby strollers or whatever. Let’s do something else. I just love this world of additive manufacturing because you can do that kind of thing. It’s really upending the supply chain structure that’s out there.”

In this article: electric vehicle, EV, electric bike, carbon, Bicycle, 3D printing, cycling, superstrata, e-bike, news, gear
All products recommended by Engadget are selected by our editorial team, independent of our parent company. Some of our stories include affiliate links. If you buy something through one of these links, we may earn an affiliate commission.