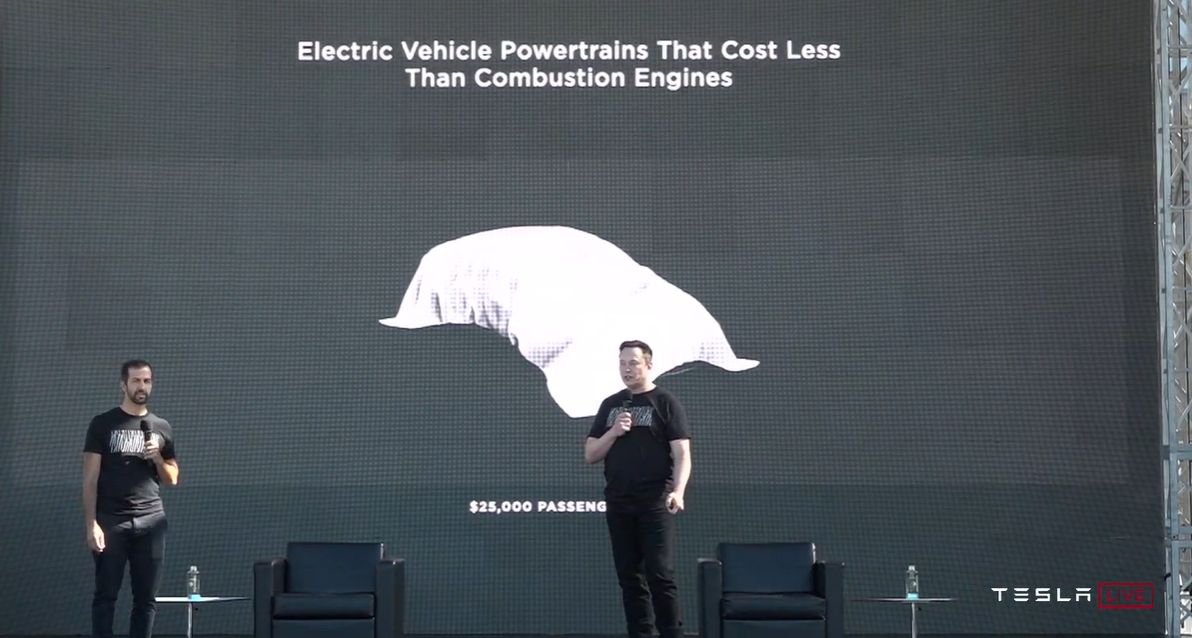 The Tesla Battery Day presentation is under way, and CEO Elon Musk has shown off a number of changes the company is making that he says can halve the cost per kWh of building electric vehicle battery cells. Just before showing off the $140,000~ Model S Plaid and its 200MPH+ top speed, Musk said these changes could be enough to help Tesla make the compelling $25,000 electric car within three years, which we should note is similar to a “Three years away” comment he made in 2018. “We don’t have an affordable car” he said “...that’s something we will have in the future. But we’ve got to get the cost of batteries down.”

Other than the price, that car doesn’t have a name or even much of a shape to talk about just yet, and considering the path of the $35,000 Model 3 — we wouldn’t quite want to pre-order one just yet. Speaking of pre-orders, apparently about 600,000 people have laid down $100 to get in line for the Cybertruck.

As far as things that are closer to reality, Musk claimed a private beta of the long-awaited Full Self Driving upgrade for Tesla Autopilot could start in the coming months, following a “fundamental rewrite” of the car’s software.

Along with Drew Baglino, SVP of powertrain and energy engineering at Tesla, Musk said the changes include new tabless cells that can contain six times as much power, five times as much energy and increase range by 16 percent.

The new cells measure 46mm by 80mm, which gives them their name, the 4680. As you can see in the livestream below, making these larger cells raised issues of thermal management, which has been addressed by their cylindrical design. Eliminating a “foil-to-tab” weld and aligning the foils in a shingled spiral gives these cells a shorter electrical path, although as TechCrunch notes, the manufacturing process isn’t quite working yet.

That’s in addition to “in body” battery cell engineering that makes the battery an integral part of the car’s frame, and plans to extract lithium from clay in the Nevada desert.

As Reuters notes, analysts estimate Tesla battery packs cost bout $156 per kWh in 2019, and could cut that to as low as $70 or $80 in the next few years, which could shave off a couple thousand dollars per vehicle.

In this article: Electric vehicle, EV, Battery Day, Elon Musk, tabless, 4860, Autopilot, Full Self Driving, battery, Tesla, news, gear
All products recommended by Engadget are selected by our editorial team, independent of our parent company. Some of our stories include affiliate links. If you buy something through one of these links, we may earn an affiliate commission.