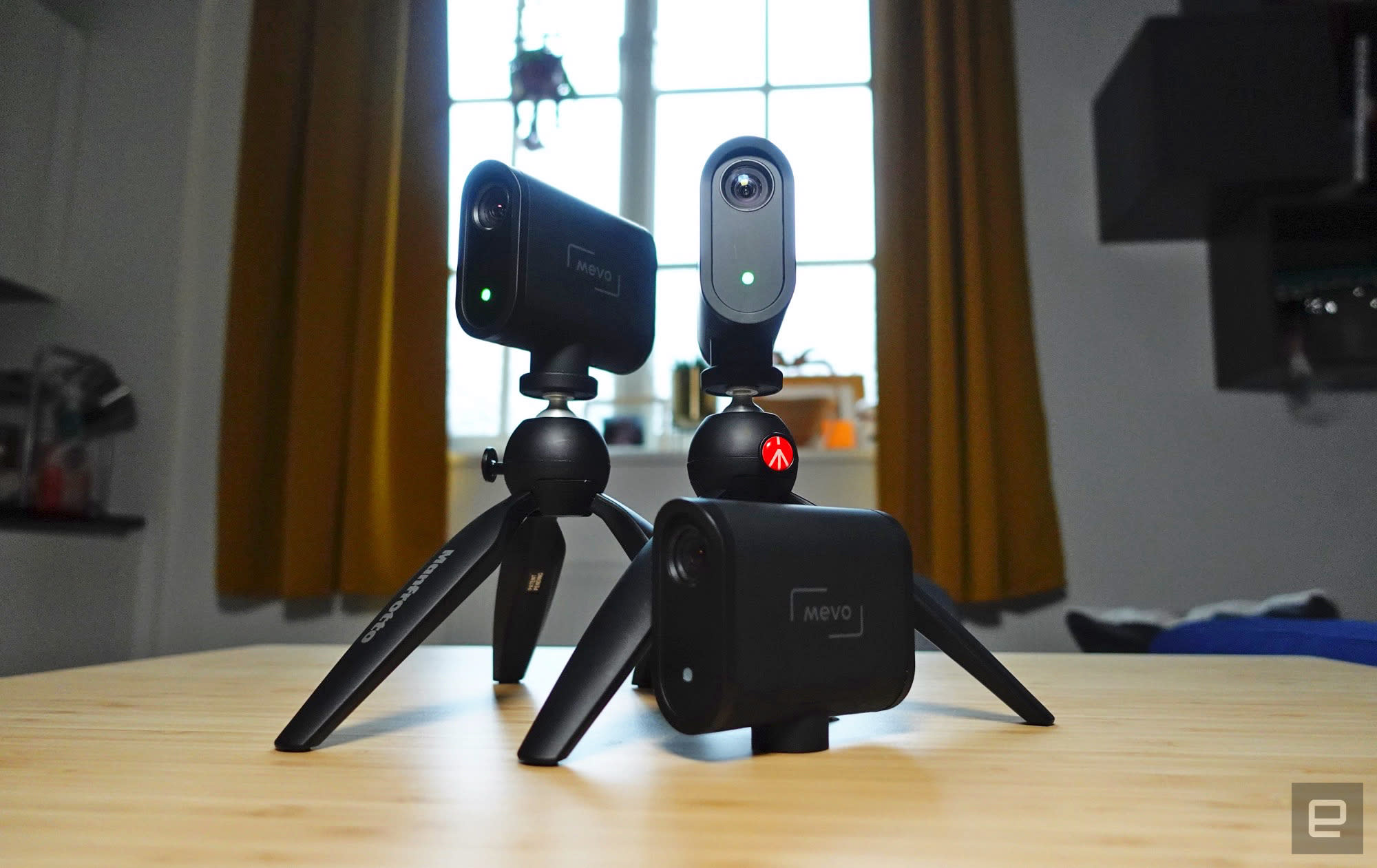 A multi-camera miracle, but it falls short of greatness.

Logitech’s Mevo Start cameras were built for live streaming. I don’t mean webcam conference calls or video that you can record and edit (though you can do both of those things with the Start). These are live streaming cameras, first and foremost, aimed at the growing number of creators on YouTube, Twitch and elsewhere.

The Mevo Start 3-pack kit ($1,000) consists of three streaming cameras that connect together wirelessly through the companion Multicam app. With the ability to instantly switch and stream between three different camera angles, it has the potential to overhaul how streamers broadcast. Until now, that has usually demanded thousands of dollars of equipment, along with significant expertise.

If you have a strong internet connection, some practice live streaming and, to be honest, a lot of patience during the setup, this could change how you stream. It could also lower the barrier to entry – so I thought I would test it out. Am I willing to make the leap from my camera, PC and OBS setup to three tiny wireless cameras?

Let’s start with the Mevo Start itself. It’s a solid camera small enough to slip into a trouser or jacket pocket. On the back, it has inputs for mics, USB-C for both charging devices and being charged itself, and a microSD slot too. The unit has a nice matte finish (sadly, yes it’s a fingerprint magnet), and a rubberized power button at the back that’s easy to find without having to look. The 3-pack consists of, yes, three of them, with USB-C charging cables. From there, it’s all down to you to figure things out, which for many, will mean tripods, plural, and microSD cards if you want to record footage of each individual camera. Oh and also a standalone mic if you want to improve the audio quality.

I’m not going to dig too deep into the minutiae of sound and image quality, but the camera mics will pick up everything around you, so most users will need a mic for decent audio talking to the camera – especially in busy environments.

Unless you’re stepping up from a webcam to the Mevo Start, you’ll probably notice a dip in image quality compared to streaming from a flagship phone or digital camera. Streaming resolution on the Start tops out at 1080p at 30 frames per second, which is a little disappointing when we’re starting to get comfortable with 4K content, but also because that means any digital zooming (well, cropping – more on that later), is going to lead to even grainier video. Conversely, this means less heavy lifting for your internet connection, which is a good thing.

While it is not the most high-fidelity streaming option, the Start aims for versatility over specialization. And let’s not forget: the eye-catching feature is this multi-camera setup. There’s nothing quite at this price (and level of accessibility) for a multi-camera streaming setup. Normally it would cost far more than $1,000 to offer a comparable camera ‘studio’ capable of live broadcasting online.

Logitech has made some sensible choices with the Start specifications, too. Each camera can record and stream for up to six hours without the need to be plugged into a power source. This means less cable calculus when packing the cameras and also offers you greater freedom when you’re rigging up the cameras. I balanced one on top of my kitchen cabinet, pointing down as I prepared vegetables for a meal.

The Start also has a very slight light hood around the camera lens to help reduce light flare, while the thread for tripods fits two different types of stands. Logitech has thought about these cameras from the perspective of a stream.

But maybe it should have thought a little more: My first afternoons with these cameras were so frustrating, I wanted to give up.

Once you’ve downloaded the Mevo MultiCam app, you’ll then need to individually download firmware updates to each camera… if your phone or tablet deigns to register the existence of each camera. For me, it led to a frustrating loop of a camera being detected and trying to corral it into a firmware update before it suddenly disappeared from the Bluetooth ether. This part ended up taking hours, turning into days. (Well, a couple of afternoons.)

It was the first sign that consistency is the biggest issue with the Mevo camera setup. And while I could give the product the benefit of the doubt, live streams are fraught at the best of times. I’ve done countless streams for Engadget, flanked by professionals who make sure I’m not screwing things up. I’ve never disappeared from an Engadget livestream, but I can’t say the same of my week of stream attempts with Mevo Start. But before I relive that horror, what is the Mevo Start capable of? I was pleasantly surprised to discover: a lot.

The Mevo app has an auto-director mode that will switch between the cameras without you having to tap on your phone. Better still, you can choose to prioritize one camera and adjust how long the robo-director holds a shot before switching. You can even pick the kind of transition used, from immediate cuts through to slide swipes and other gentler changes. Alas, no star swipe.

It’s these elegant touches that elevate a plain stream into something a little slicker. You can also crop the video on each camera, helping to cut out, say, a messy corner of your apartment, or just offer up a closer look at whatever you’re cooking or crafting.

As the camera maxes out at 1080p, the more you crop, the more fidelity you will lose on your stream, which really limits the usefulness of the feature. While no one streams in 4K, if these cameras had 4K you’d at least be able to crop in without losing too much quality. In the same settings menu, you can adjust the degree of latency you want to use. High latency means that your feed will be held up a little longer before it’s streamed to viewers, ensuring a more consistent connection and – hopefully – video feed. There’s also a low-latency option if you’re extremely confident in your web connection, and this will ensure the video stays closer to real-time.

You can fine-tune the cameras further, with profiles for outdoor lighting and even an HDR toggle. There are also some stylistic profiles for vivid high-contrast, grayscale and more, adding more flexibility depending on your own lighting setup, location or simply artistic tastes.

There’s even a degree of editing available through overlays, where you can add lower third text (like you’ll see most TV news shows, and a lot of YouTube streams) or even introductory full-screen text to your video stream. It’s simplistic but it’s built into the app – it’s easy.

So there is a lot to praise in the Start kit, but then you, well, start using it. The main test for me was to see how easy it was to stream directly to YouTube. The first issue I encountered is one every new streamer will struggle with: you need over 1,000 subscribers to your YouTube channel in order to enable a simple connection. As I didn’t want to mess up Engadget’s official channel cooking up a storm with tempeh (with hindsight, I could have made an unlisted stream), instead I had to use the Real-Time Messaging Protocol (RTMP). And go a little mad.

Once your camera angles are in place and your connection looks stable, you can tap the live button on the app. This will take you through to all the livestream options, including platforms YouTube, Facebook and Vimeo. The RTMP option is all the way to the right of these options, which is tough to find on a phone.

While you can set up everything on a single device, but I’d suggest having a laptop or something else internet-connected nearby for setting up your streams on YouTube, as you may find yourself flitting between a web browser (needed to tinker with YouTube Studio settings not available on the app) and Mevo multicam app a little too much.

Tap on RTMP, and you can set up the hooks for YouTube to pick up at its end. Other notes that might help you: Server URL and Stream URL are different things, don’t mix them up. Also don’t expect your stream to go instantly live. My Start camera stream typically took a minute to buffer or settle into a feed that the public could watch. What’s frustrating is that YouTube Studio’s interface shows a buffering window, regardless of whether your stream is live or not. I would have to check the shareable link to the stream to check if I was even live. The “live” labels on the Mevo app itself are not accurate.

The multicam app was mostly responsive and did what I expected it to do, but it was also fussy. Swap between one too many apps (remember how I initially tried to adjust my Youtube settings on Safari on the same phone?), and the connection will cut out. Absent-mindedly lock your screen, and again, the stream is lost. I think it’s common sense that you probably didn’t want to cut a livestream connection if you locked your phone. Or maybe I’m making excuses for myself. It’s probably a little of both.

Despite having a healthy internet connection and keeping in close proximity to the cameras, I lost my stream a few times for reasons I’ll never know. And that’s a shame, as there’s so much potential in this Mevo camera trio.

While I’ve touched on some of the settings you can access on the cameras, there’s further flexibility inside the app. You can tweak frame rate, suppress echo and even choose the bitrate and recording format for your backup recording, all of which will be stored on your iOS or Android device. I like that these backup files are neatly stored in one place.

For beginners or streamers looking to upgrade their streaming style, there are a few bumps on the road to a flawless multicam setup. Mevo does offer a glimpse at an effortless solution – it’s definitely streamlined many of the processes, and the jack-of-all-trades specs mean that this could be the ideal setup for upgraded live music streams, community projects or simply to add polish to existing livestreams. You will have to consider consistency though. My experience has been mixed, but others have fared better. There’s also a vibrant user community across both Facebook and Reddit that was able to help me when things went wrong. Hopefully, there’s a future Mevo camera in the works that’s a little more stable and polished. And maybe 4K capable.