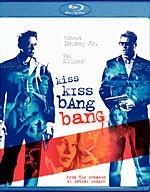 Yesterdays HD DVD vs Blu-ray title bout went great -- for HD DVD that is. HighDefDigest happened to host two more similar head-to-head comparisons yesterday that we thought you might want to take a look at. Interestingly enough, both of the other titles, Kiss Kiss Bang Bang and Rumor Has It, suffer from a similar issue of bad cropping, a tad darker, and a bit more grain. We are starting to question however if this is from the titles themselves or the Samsung Blu-ray player. It will be impossible to tell until the Panasonic or Pioneer Blu-ray players are released. But no matter how you spin it, the Toshiba HD-A1 HD DVD player gives you a better picture then Samsung's BDP-1000 Blu-ray player right now.

In this article: bdp1000, blu-ray, comparisons, dtv, hd, hd dvd, hd-a1, HdDvd, hdtv, tv
All products recommended by Engadget are selected by our editorial team, independent of our parent company. Some of our stories include affiliate links. If you buy something through one of these links, we may earn an affiliate commission.
Share
Tweet
Share