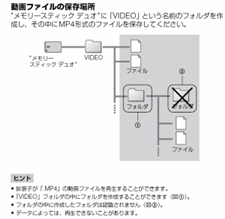 PSP Vault has an impresive story detailing some of the potential hidden secrets of recently released firmware 2.80. Using their mad Japanese skillz, they took a look at Sony's PSP manuals for the firmware, which can be found here, here and here. The video standards have finally been revealed, and they show how Sony still refuses to make it easy on the end user.

So for H.264 videos, you're looking at support for files ending with a .MP4 or .M4V extension. They must be 768kbps or under, have a framerate of 30fps or under, and be Level 1.3 or under Baseline Profile, or Level 2.1 or under Main Profile (but CABAC only). The audio tracks of these videos must be in the AAC format, be 128kbps or under, be 48kHz or under, and be in stereo.

Uh... okay. Can't we just dump random files into our system without thinking about these technical specs? Another interesting discovery of the article shows how the recent firmware upgrade can allow for PSP-specific codes to be written into websites. For example, webpages can be created to offer downloads... but only for users of the most current firmware. Or, it could lead to some really exciting game and internet synergy. It appears that there's a lot hidden in the PSP; too bad Sony hasn't been upfront with all of it quite yet.
In this article: 2.80, avc, browser, cabac, firmware, hidden, internet, japanese, m4v, manual, manuals, mp4, profile, secrets, standards, video
All products recommended by Engadget are selected by our editorial team, independent of our parent company. Some of our stories include affiliate links. If you buy something through one of these links, we may earn an affiliate commission.
Share
Tweet
Share