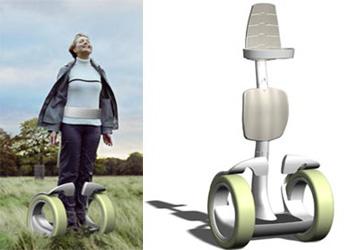 While this new adaptation of a wheelchair may resemble a certain human transporter device, the humbly-named Standing Wheelchair just might be regarded with a tad more sincerity than the dear 'ole Segway. This two-wheeled cruiser was designed to give those who have lost some of their motor functions -- paraplegics in particular -- a new way to experience the world. Pending the device actually getting built, the engineering would seem quite impressive, ditching the unfashionable style often times associated with wheeled contraptions for the handicapped, and instead blending functionality with (fairly) unobtrusive lines that shouldn't draw the wrong kind of attention at first glance. Currently, those unable to walk unassisted have to resort to less-than-ideal methods to get around, and even when carted in a traditional wheelchair, they're forced to view the world a few rungs lower than the average joe (unless, of course, they're using the iBOT). Apparently this device solves that dilemma, and offers those with paralyzed lower limbs a new way to make use of their legs. While little detail is given on how the wheels are actually controlled, we can (hopefully) assume that sufficient safeguards were built-in to prevent certain catastrophes from occurring (i.e. peeling out from under you) -- while ideas to mobilize the disabled are often glossed over (or just not taken seriously), it's quite possible this Standing Wheelchair concept could raise a few eyebrows.

[Via Mobile Mag]
In this article: disabled, handicapped, mobility, mobilizer, paralyzed, Standing Wheelchair, StandingWheelchair, wheelchair
All products recommended by Engadget are selected by our editorial team, independent of our parent company. Some of our stories include affiliate links. If you buy something through one of these links, we may earn an affiliate commission.
Share
Tweet
Share