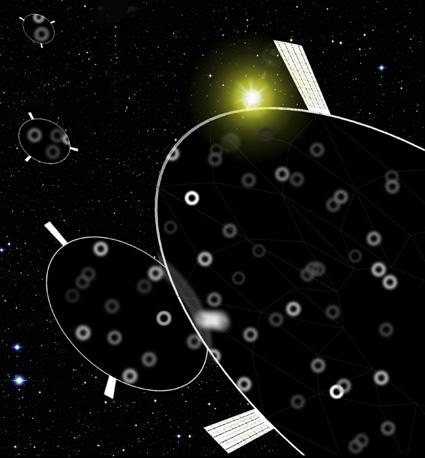 With all these batteries exploding vehicles running around, we aren't too surprised that researchers at the University of Arizona are getting fired up about stopping global warming, but dropping $2.5 trillion on such a project might just cool the whole idea down a bit. Nevertheless, astronomer Roger Angel thinks that launching a "constellation made of trillions of small, free-flying spacecraft parts a million miles above Earth" could form a long, cylindrical cloud to reflect "about 10 percent" of the sun's rays away from our planet. The lightweight flyers hanging around in the L-1 orbit would be crafted from "transparent film pierced with small holes," utilizing "MEMS" technology mirrors as tiny sails that hold them in line while drifting about. The idea gets even zanier when referring to shooting the "20 million ton structure" into space; it's been suggested that "20 electromagnetic launchers" running on hydroelectricity could launch a stack of flyers "every five minutes for ten years" to complete the project, and while he feels that even the massive sunshade is no substitute for "developing renewable energy," that's still a huge chunk of coin to drop on something so, um, outlandish.

[Via Primidi]
In this article: arizona, billion, debt, expensive, global warming, GlobalWarming, nasa, space, space sunshade, SpaceSunshade, sum umbrella, SumUmbrella, university, usa
All products recommended by Engadget are selected by our editorial team, independent of our parent company. Some of our stories include affiliate links. If you buy something through one of these links, we may earn an affiliate commission.
Share
Tweet
Share