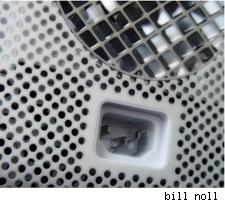 Earlier today Apple announced their The Power Mac G5 Repair Extension Program which applies to Power Mac G5 systems that have "power-related issues as a result of a specific component failure within the computer's power supply." In other words, if your G5 isn't starting up and your serial number falls conveniently within ranges indicated, Apple will fix you up on the house. Apple says there are no known safety issues caused by this component failure. Having a G5 for a paperweight is overkill, however, so you might as well let them fix it.

From the info page:

The affected Power Mac G5 models were sold between approximately October 2005 and August 2006 and feature Dual 2GHz, Dual 2.3GHz or Quad 2.5GHz PowerPC G5 processors.
If Apple or an Apple Authorized Service Provider (AASP) determines that your Power Mac G5 computer is eligible as part of the program, the power supply repair will be covered by Apple for up to two years from the original date of purchase even if your Power Mac G5 is out of warranty. This worldwide Apple program does not extend the standard warranty coverage of the Power Mac G5.

Affected systems will exhibit one of the following power-related symptoms:

By the way, if you've been bitten by this bug and already paid for out of warranty repairs that would now qualify under this program, Apple or the AASP that did the repair should be contacting you about starting the reimbursement process - but you might want to contact them first to get the ball rolling.

If you're a G5 owner, leave us a comment and let us know if your system is one of the ones affected!
In this article: apple repair program, AppleRepairProgram, g5, powermac, powermac g5, PowermacG5
All products recommended by Engadget are selected by our editorial team, independent of our parent company. Some of our stories include affiliate links. If you buy something through one of these links, we may earn an affiliate commission.
Share
Tweet
Share