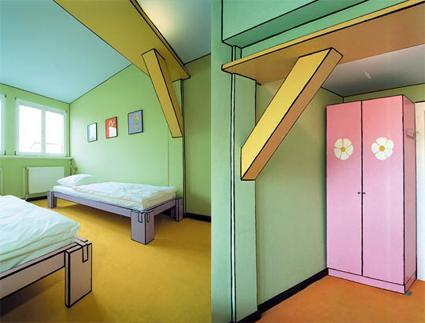 The Arte Luise Kunsthotel has to be one of the coolest hotels on the planet. Each room was designed by a different artist, and the prices won't require you to sell your PS3 for an overnight stay.

The room "Comic" looks like something out of Jet Set Radio Future, or maybe an A-Ha video. That's an actual photo of the room above. You can just imagine losing your depth perception and sense of realism there, and we can't think of a more perfect place to set up a game console. Preferably a Wii, because anything with more horsepower would overpower the room.

Check out some of the other rooms in the place, it's a real trip. Next time we're in Berlin, Joystiq calls dibs on this room and "Future Comfort". That shower looks like something out of Terry Gilliam's Brazil.

In this article: art, Arte Luise Kunsthotel, ArteLuiseKunsthotel, cel-shaded, comic, game, hotel
All products recommended by Engadget are selected by our editorial team, independent of our parent company. Some of our stories include affiliate links. If you buy something through one of these links, we may earn an affiliate commission.
Share
Tweet
Share