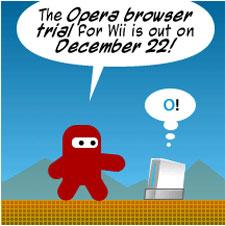 If you woke up today bathed in a glorious blue light, know that your Wii received a message in the early morning hours and is eagerly waiting to tell you all about the Forecast channel. After you apply the system update, the Wii's weather service channel will be available from the main menu. Think of it as an informative warning system, constantly reminding you of the deadly UV rays, bone-crushing hail and tumultuous tornadoes that await you in the outside world. Stay inside with some games if you want to survive.

In related news, the official Opera website has been updated, revealing the official release date for the Wii's internet browser. A trial version will be released this Friday, December 22nd, with the full version following sometime next Spring.

Update: As previously announced, the full version of the browser will remain free until June 2007. After that, it will cost 500 Wii points ($5) to download.

In this article: forecast channel, ForecastChannel, internet channel, InternetChannel, Opera, Wii, Wii browser, Wii internet, wii weather, WiiBrowser, WiiInternet, WiiWeather
All products recommended by Engadget are selected by our editorial team, independent of our parent company. Some of our stories include affiliate links. If you buy something through one of these links, we may earn an affiliate commission.
Share
Tweet
Share