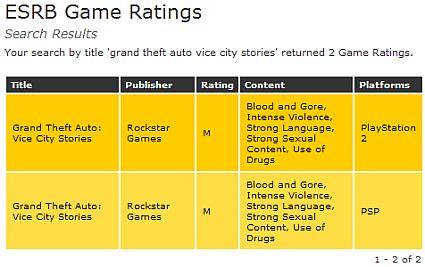 Vice City Stories to be PSP exclusive? Many doubted Rockstar, considering how Liberty City Stories made the jump to PlayStation 2. Well, looks like the doubters were right: A look at the ESRB website reveals a listing for a PS2 version of Vice City Stories. If it follows the footsteps of its Liberty City brethren, it will launch on PS2 for a measly $20, sans multiplayer.

Considering the relatively low sales of the latest GTA, it makes sense. Now, a whole new audience will be able to play with Phil Collins.

In this article: esrb, grand theft auto, GrandTheftAuto, gta, playstation 2, Playstation2, ps2, rockstar, vice city, vice city stories, ViceCity, ViceCityStories
All products recommended by Engadget are selected by our editorial team, independent of our parent company. Some of our stories include affiliate links. If you buy something through one of these links, we may earn an affiliate commission.
Share
Tweet
Share