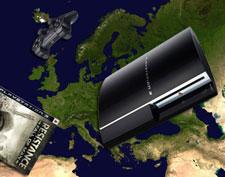 Those walking out of a UK store next month with a PS3 under the arm will no doubt be concerned about the retail price of launch games -- doubly so if they actually paid for the console on their way out. Sony has announced a £39.99 (€59.99) price point for first-party launch games, placing the likes of Motorstorm and Resistance: Fall of Man in the same bracket as Wii and first-party Xbox 360 titles. Presumably, the games will contain all of the content from their American and Japanese releases.

Sony also notes that an "introductory period" will see PlayStation Network games priced between €2.99 and €9.99, with game-specific downloadable content starting at €0.99 and increasing depending on the product's scope.

In this article: Action, Euro PS3, EuroPs3, FPS, Insomniac, Motorstorm, PS3, PS3 launch, Ps3Launch, Resistance, Resistance Fall of Man, Resistance-Fall-of-Man, ResistanceFallOfMan, SCE, Shooter, Sony
All products recommended by Engadget are selected by our editorial team, independent of our parent company. Some of our stories include affiliate links. If you buy something through one of these links, we may earn an affiliate commission.
Share
Tweet
Share