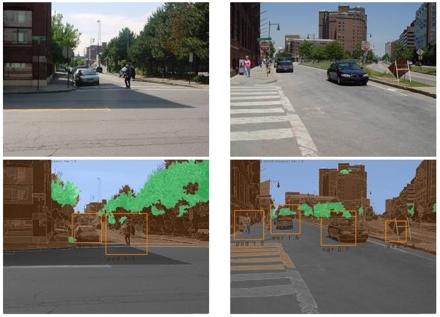 If imitation is the sincerest form of flattery, robots have been laying it on thick with human-inspired forms since day one. Unfortunately, AI hasn't quite kept up with mechanical achievements, mainly due to the fact that the human brain isn't merely mysterious in many regards, but dang complicated to boot. However, some brain experts at the Tomaso Poggio lab for brain research at MIT have made some impressive gains in bridging the gap. Using a computational model of how the brain processes info, the researchers created a bot capable of recognizing different objects in a street scene. The research is primarily targeted at brain geeks looking for ways to repair damaged brain functions and to better understand the brain's operation, but computer science should benefit from the biological inspiration of this research, and the methods used could lead to computer vision systems capable of better surveillance, car driving assistance, visual search engines and vision for robots. Because of its biological nature, the Poggio lab vision system is trained over time by being shown various street scenes, and the data in each picture is processed in much the same process as the brain goes through when presented with an image. Right now the system just mimics the brain's instant recognition faculties, but soon it'll be capable of putting more thought into what it sees -- for instance, cars do not belong in the sky -- so be warned people of earth: the first step in destroying an enemy is visually recognizing them. Our days are numbered.

[Via Medgadget]
In this article: bot, brain, image detection, ImageDetection, mit, robot, vision, vision system, VisionSystem
All products recommended by Engadget are selected by our editorial team, independent of our parent company. Some of our stories include affiliate links. If you buy something through one of these links, we may earn an affiliate commission.
Share
Tweet
Share