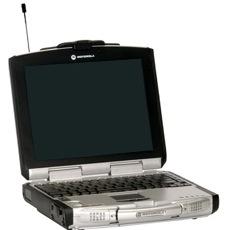 Well, well, lookie here. Motorola just announced two new rugged Motorola branded PCs for use by our mustachioed emergency services brethren. Yes, Motorola is in the PC business and has been for awhile now, they just don't flaunt their wares like others. The new ML910 Rugged Notebook (so rugged, it's in the name!) and MW810 Mobile Workstation are wireless-enabled mobile computers intended for use in extreme conditions. The ML910 is actually a followup to the ML900 (pictured) features a 13.3-inch widescreen display, 1.66GHz Core Duo processor, 128MB of ATI Radeon X1400 graphics, and choice of radios including integrated WiFi, Bluetooth, GPS, and WWAN. Better yet, it features a "hard drive heater" for startup and operation in freezing temperature and enough internal diagnostics to prevent damage in extreme cold and heat. The MW810 Mobile Workstation packs an internal "Dead Reckoning" GPS backup feature which continues to estimate your location even when the signal is lost. Like the laptop, it also supports a wide range of internal radios for seamless multi-network roaming "even at highway speeds." We presume they're talking about Mobile WiMax in this case. Hell, without prices, release dates, pictures, or any real details it's difficult to understand what they've got in store for us. One thing's for sure though... they won't be pretty by conventional CE standards.

In this article: ml 910, Ml910, motorola, mw 810, Mw810
All products recommended by Engadget are selected by our editorial team, independent of our parent company. Some of our stories include affiliate links. If you buy something through one of these links, we may earn an affiliate commission.
Share
Tweet
Share