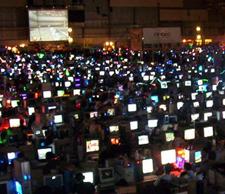 WorldofWar.net points to an article over at Boot Daily which proclaims the death of LAN parties. I don't know if you've been lucky (or nerdy, I guess) enough to be party to this phenomenon, but a LAN (Local Area Network) party is where a bunch of nerds bring their computers over to someone's house or a hotel, hook them all up, and play Counterstrike, Warcraft III, or whatever the latest game is (I have fond memories of huge Rise of Nations and Soldier of Fortune matches at a friend's house) until the sun comes up.

This article, however, says that LAN parties are dead, and World of Warcraft is holding the smoking gun. Not only are the nerds staying home to raid in Outland, but even when they show up to the parties, according to the article, some are playing WoW instead of participating the game of choice. The real fun of LAN parties isn't just playing-- anyone can do that now, from Xbox Live to the many, many online PC games-- but it's playing with people right next to you, and all the camaraderie and trash talking that comes from that.

It's true that I haven't been back to a LAN party in a long while (though part of that might have been a move away from the city where I used to do it), but I don't see that they're dead-- just last year I was at PAX, where the culture of the LAN party was alive and well. And claiming WoW killed them is a stretch at least-- if anything it's the spread of broadband (which makes the hassle of a LAN party just not worth it to many casual players), and a general lack of really classic multiplayer games lately. Really, what's the last multiplayer experience that was strong enough to build a whole culture around? Battlefield 1942 and the sequels maybe, and then... ? Gears of War? If LAN parties are dead, it's because players are still stuck playing games that are years old-- even Dreamhack, the biggest LAN party in the world, is still playing CS 1.6 and Quake III Arena. Heck, they're playing Starcraft, which was released almost ten years ago! If LAN parties are an "endangered species," it's because the games that supported them are dying off as well.

In this article: counterstrike, lanparties, pax, worldofwar.net, worldofwarcraft
All products recommended by Engadget are selected by our editorial team, independent of our parent company. Some of our stories include affiliate links. If you buy something through one of these links, we may earn an affiliate commission.
Share
Tweet
Share