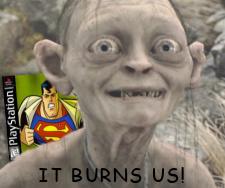 Universally recognized as the worst video game ever created, Superman 64 was this close to unleashing a spawn on the original PlayStation. According to an article at PlayStation Museum, when Titus was wrapping up development on the game in late '98, plans were to port the title to the PS1.

But then Superman 64 was released and began to induce physical pain on players. Even though the PS1 game was approved for release by Sony and issued a product code, it's obvious someone decided to hit the eject button on the project. Officially the game was canned due to "licensing difficulties", but we know it was a merciful act of God.

In this article: badidea, nintendo64, superman, titus
All products recommended by Engadget are selected by our editorial team, independent of our parent company. Some of our stories include affiliate links. If you buy something through one of these links, we may earn an affiliate commission.
Share
Tweet
Share