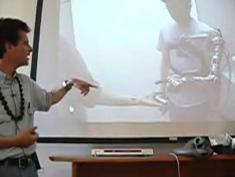 While you'd heard the whispers of a robotic prosthetic arm being crafted by Dean Kamen and his engineering colleagues, very little details have since surfaced on the project. Thankfully, a video was captured during a recent conference in Honolulu, Hawaii where Dean was addressing the FIRST Robotics competition. During the speech, however, he segued (ahem) into a brief glimpse at what's been going on behind the scenes with the device. Shown as "Gen X - Separate Exo Control," the robotic arm was seen demonstrated by team members grasping a water bottle from a friend, picking up an ink pen and turning the wrist over in order to write, and even scratching his nose. Kamen explained that haptic response was paramount, and the "fully completed" prototype sports 14 degrees of freedom (and actuators) and weighs less than nine pounds. Click on through for the captured demonstration.

In this article: arm, dean kamen, DeanKamen, deka, exoskeleton, FIRST Robotics, FirstRobotics, Gen X - Separate Exo Control, GenX-SeparateExoControl, limb, prosthetic, robotic arm, RoboticArm
All products recommended by Engadget are selected by our editorial team, independent of our parent company. Some of our stories include affiliate links. If you buy something through one of these links, we may earn an affiliate commission.
Share
Tweet
Share